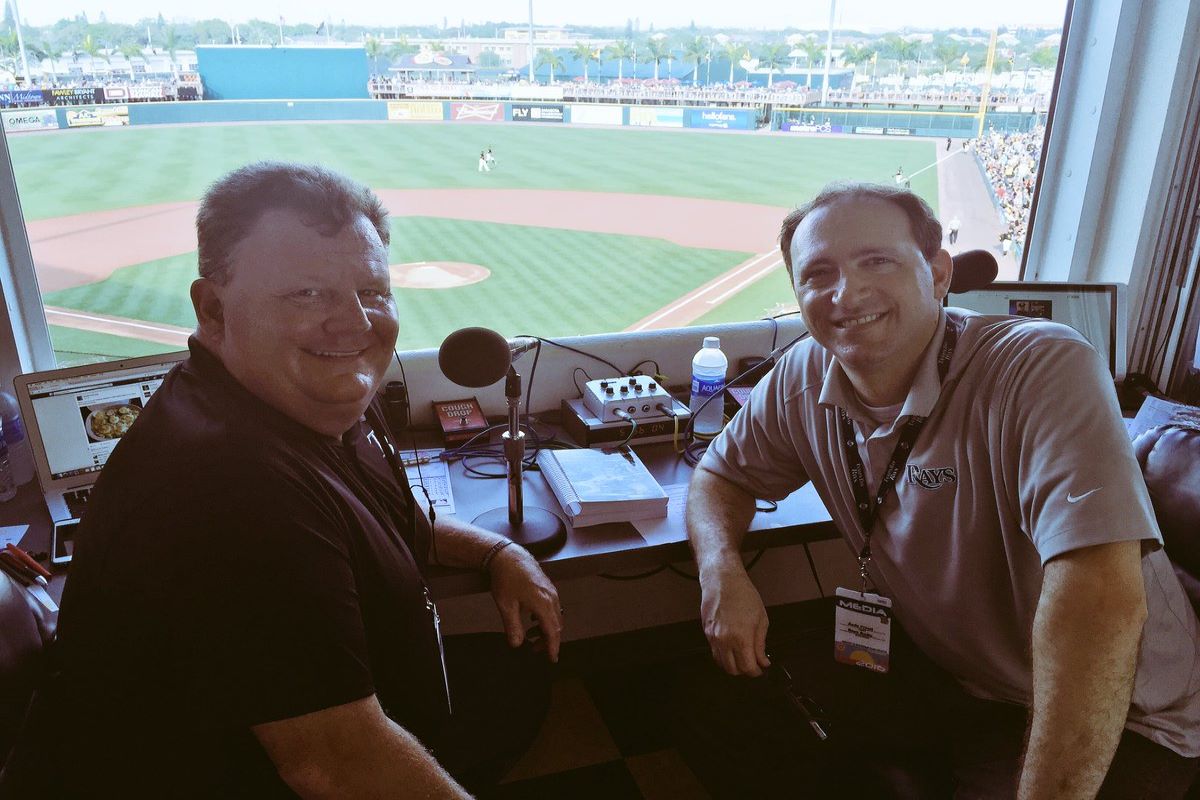 Dave Wills and Andy Freed (right) have voiced Rays' games together for 16 seasons. The popular duo made it to Arlington to call the Series live. The Dodgers and ESPN Radio didn't make it to Arlington. They're broadcasting the games remotely.

To be sure, I checked in with Bernadette McDonald, a longtime broadcast executive in the Commissioner’s Office. She confirmed that only the Rays are calling the World Series live from the site. Yes, Covid has turned the sports broadcast world upside down, including radio.

ESPN and the Dodger’s radio announcers are staying put, in Bristol and Southern California, respectively.

Dan Shulman, Olympic gold medalist Jessica Mendoza and Chris Singleton are on the national call. The trio is anchored at studio headquarters in Connecticut describing the Series off monitors. Not an easy task by any means. It’s one thing doing so for sports played on a rectangularly shaped playing surface like football or basketball, or even hockey on its oval, but baseball? Now that’s tough.

Voices are given multiple monitors in some instances and computers for real time data and information. But they are emotionally isolated and being asked to paint a picture semi blindfolded.

Throughout this past truncated season, broadcasters for all MLB clubs have been calling road games remotely. So no one has traveled. Even ESPN on the TV side had its announcers call plays remotely.

The Dodgers’ voices Charley Steiner and Rick Monday haven’t left Los Angeles all season. Rick works in a luxury box at Dodger Stadium and Steiner hasn’t left his SoCal home all year, not even for home games. Monday told an interviewer last week that he and Charley did a couple spring training games live in Arizona in late February. Then Covid-19 stopped all baseball’s proceedings. The two haven’t seen one another since. Yet they were on-air working the entire abbreviated season together from separate locations! And now they’re continuing the practice during the World Series.

Imagine calling the wild play that ended game #4. It was like describing a three-ring circus off your television set.

Vin Scully would have aced it, but he even he, the greatest, couldn’t have given the ending its proper due unless he was at the ballpark.

Meanwhile, the Tampa story is different.

Dave Wills, 56, and partner Andy Freed, 49, are two enthusiastic broadcasters who have a natural chemistry. They love what they so and it manifests itself on-air. The Rays’ radio voices are conversational, descriptive and bring a nice rhythm to their microphones. They’re completing their 16th season as a duo and have built a popular following in the Tampa-St. Pete area.

I checked in with both and asked them to tell us in their own words how they were allowed to travel and what it’s like being on the road during these restricted times.

Andy Freed (in his words):

Yes we are the only broadcast other than Fox TV to be on site.

We were broadcasting from Tropicana Field throughout the season as well as the Wild Card Series and the ALDS. With support and permission of the Rays ownership, we decided that we’d like to travel if the Rays got to the ALCS. So we went to San Diego and continued on to Arlington.

Of course, being at the games is so much more comfortable than squinting at a matrix of monitors. It really is the only way to do the games accurately and in real time. Being at the game allows me to use all senses to incorporate the proper emotions of the moments. Sight, sound, feel, and even smell sometimes, are all utilized in reporting the events and atmosphere of the games.

Calling the final play of Game #4 of the World Series on Saturday was rather challenging, as it was the fastest play I’ve ever called, in any sport, with the most happening in several locations of the field simultaneously. Just that moment alone, may be the biggest in Rays franchise history, justifying the decision to travel to the games.

This is also the first time in my career that I’ve gotten the sense that we, as the broadcasters, are doing something with a higher purpose than normal. Being the only local link to the legions of Rays fans has added a sense of responsibility to this season, especially the playoffs. Hearing from so many fans about the impact these games are having on their lives has taken me aback.

Just the other day we got a note from the daughter of a woman who is in hospice and she is spending her final moments listening to every pitch. That sort of message puts so much into perspective. So, if we are providing a distraction from Covid, politics, and the raging problems people are facing, then I’m so glad that Rays ownership entrusted us to provide that onsite.

Dave Wills (in his words):

We are the only ones here (other than Fox). I think the Dodgers’ pre and post game guy is here too. It’s a little strange not to be able to pick the brain of the (opposing) team’s broadcasters because they are not here. And really haven’t talked to the Fox guys outside of a hello.

Our bosses asked if we wanted to travel and if we even wanted to go in the bubble at the end of the season. We passed on the bubble and said if the Rays make it to the ALCS we would like to be there. And they let us travel. We flew commercial and are staying at a separate hotel from the team. That was a bit awkward. Calling games off a monitor was challenging and we figured as the games get bigger we wanted to be there.

You could tell the guys calling the final play of game four didn’t see everything. We did and it was still a challenge to describe it.

Wow! Think back to early radio and the recreations. I bet Red Barber would look and say, “A monitor would have made my life much easier.”

Steiner has health concerns, so the Dodgers set him up with monitors in his living room. I think the Red Sox did something similar for Curt Gowdy when he hurt his back and missed most of a season. When I read they did that for Steiner, I thought, Vin could have kept going from his living room, though I bet his wife would have brought him food after every Farmer John commercial.