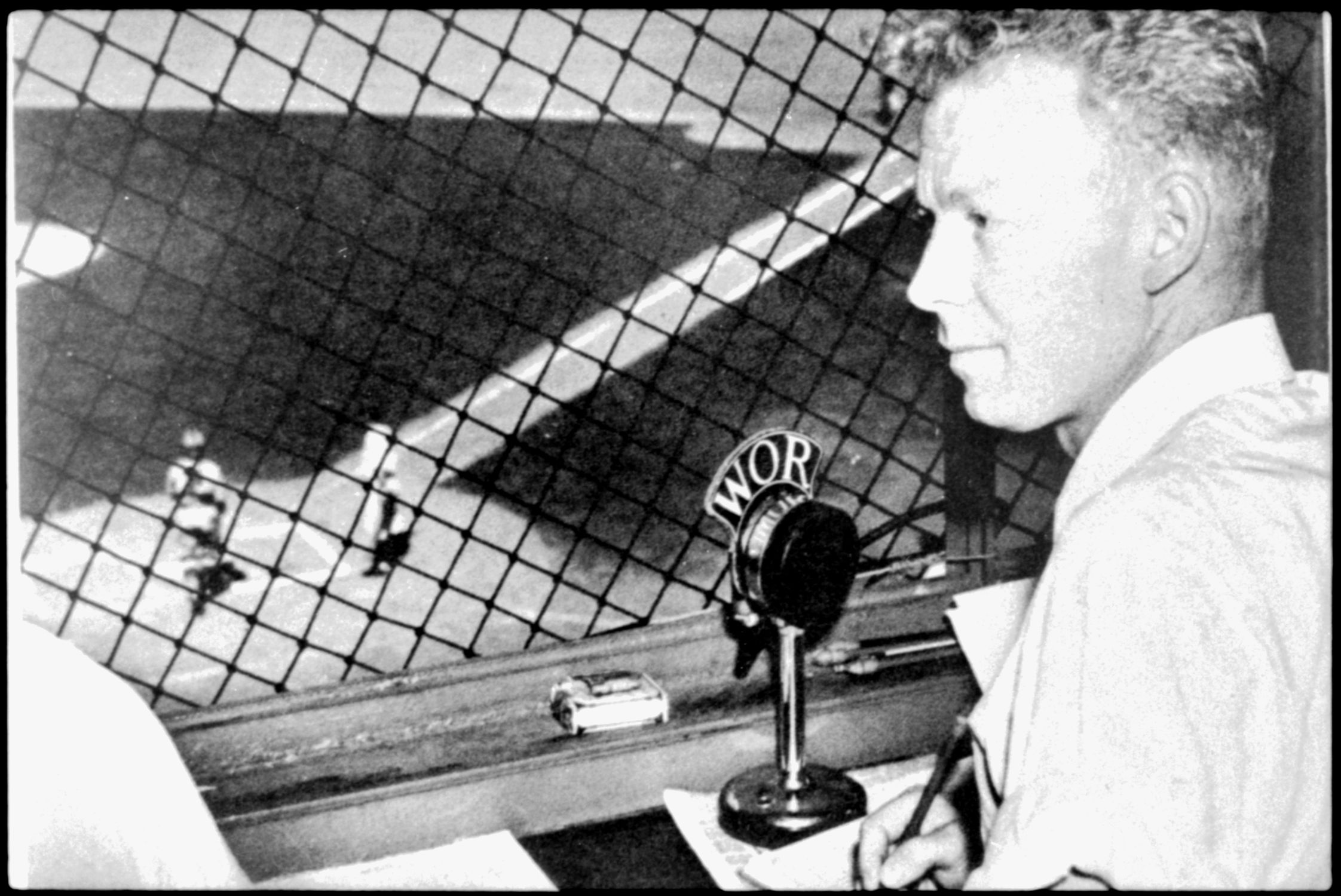 Red Barber, broadcaster of the Brooklyn Dodgers, in an undated photo.

Red Barber was unique, unpredictable, self-centered and a challenge.

If you would have asked Ernie Harwell to identify anyone he despised, you’d figure the answer would be Bo Schembechler, the former Michigan football coach who canned Ernie when he became president of the Tigers. That myopic decision at the time, made waves around the baseball world. Those in the know say, Ernie had no use either for Leo Durocher, the Giants’ and Dodgers manager from 1948-55. And another was Red Barber.

Red could be flat out cold and unreasonable, particularly on younger announcers. Barber meant as much to baseball broadcasting as Foster Hewitt did to the NHL, Ted Husing to football and Marty Glickman to basketball, pioneers and creators. The announcers since the early 1960s, owe this quartet, a debt of gratitude. They were the first to develop their craft.

Larry moved to Brooklyn in 1938 where he turned around the Dodgers’ organization, building a solid farm system, scheduling night games and introducing other innovations. His son Lee would become the American League president, grandson Andy, the general manager of the Cubs and great-grandson Leland MacPhail in various MLB and team positions.

In those years, New York’s three baseball teams had a ban on broadcasting lest a drop in attendance. MacPhail was a believer in radio, given the success he had with Barber in Cincinnati. So he recruited Red to Brooklyn and the radio ban was broken in 1939. Everything fell into place and Barber was New York’s first daily baseball voice and the Dodgers, the first in the city to do every game live from Ebbets Field and to recreate road games for hurried New Yorkers. He was of sufficient age, not to be drafted in the WW2 days.

Brooklyn and all of New York for that matter fell in love with him for a number of reasons. He had a Southern twang, was very comforting, a gentle touch, well prepared and neighborly. The fans had never heard baseball on an everyday basis. His dulcet sound and mellifluous voice was very reassuring. He was an excellent storyteller too. 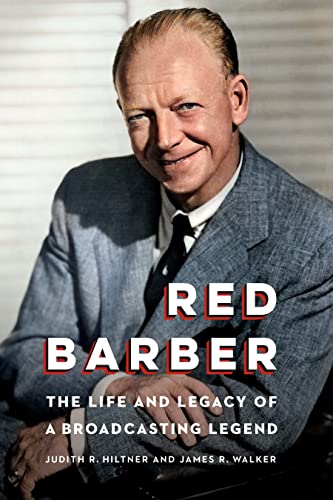 I first shook his hand in 1966, when as a 14 year old, my father took me with him on a business trip to California. In those days, during Red’s last year, he and the Yankees flew commercially. I said hello to him while walking down one of the corridors. Joe Garagiola and manager Ralph Houk were alongside them. Red showed no to little interest in spending a few minutes with him.

The meaningful conversation with him in the 1980s was in Tallahassee where he was living in retirement and I was in town on business at FSU. My Tallahassee host said Red would be happy to spend half an hour with us.

When we arrived at his house, I took note that the great Barber lived in a modest home and seemed to have an interest in gardening.

We were just warming up our conversation when the half-hour egg-timer hit zero on the clock. Red politely got out of his chair and with a taut smile proceeded to say good-bye and thank you for visiting. Won’t forget it. Marty Glickman was a friend and mentor of mine. Red did his baseball recreations from WHN where Marty did pre and post game shows. Marty added that when Red recreated games, he sat in a silent studio. From seeing the nuances of road players when they came into Ebbets Fields, he repainted  their batting stances based on memory, batter-by-batter.

Marty says that, “In the days before and after World War II (and during), you could hear his radio voice, coming out of just about any home, store or car in Brooklyn when the Dodgers were playing.”

Glickman shared with me that Red can be as cold as an ice box. He’d walk down the hallway of the station, holding his paper-bag lunch, his head tilted, almost downwardly on purpose to avoid eye-contact with others. In his book, The Fastest Kid on the Block, Glickman writes of Red: “My relationship to Red was that of an acolyte to a master. He was very serious, introspective. He was like two different people. His on-air persona was warm and friendly, as pleasant as can be. Off the air, he was taciturn, reserved.”

Red got along splendidly well with MacPhail and successor, Branch Rickey. When Walter O’Malley came along the two never built a working chemistry. Red didn’t help himself, never genuflecting to his new boss. Prior to Branch Rickey’s last year at the helm, 1950, Red got permission to hire another redhead, Vin Scully. O’Malley liked the young man and got him cheap,  railroading Barber out of Brooklyn. Red was no longer indispensable. In time, the prodigy, Scully was in charge. At 25, he did his first World Series on NBC.

In 1954, Barber joined the Yankees, sitting next to Mel Allen. Ostensibly, the giants, All and Barber got along. Many years later though Red told one-time MSG executive Pete Silverman that Mel would interrupt him on-air and it annoyed him to no-end. There was irony. When Roger Maris hit record-breaking 61st homer, it was Red’s turn on-air. The man best known for the Dodgers years in Brooklyn, called one the biggest Yankee moments ever.

“The Life and Legacy of a Broadcasting Legend.”

Longtime Los Angeles media columnist, Tom Hoffarth, does reviews of baseball books each summer. He posted one on Red Barber:

“The Life and Legacy of a Broadcasting Legend.” It was written by James Walker and Judith Hiltner.”

“Yep, the guy before Vin in Dodgers lore is worthy of a 500 page plus read,” Tom writes. Hoffarth, the former sports media columnist for the LA Daily News, has an annual array of new baseball book reviews and includes this one on his website.

Hoffarth writes this about the Barber book: “On the back cover, a litany of blurbs touting its worthiness including both MLB official historian John Thorn and author Jane Leavy as saying this ‘definitive’  biography is one ‘he deserves.’ We question if he really would want such a thing done but could appreciate the work achieved. Still, it’s an awful huge ask to get a reader to commit to this dense, expansive documentation of his life.”

Tom Hoffarth keeps great tabs on Southern California sports broadcasting and for years was with the LA Daily News.

His review of this most detailed tome on Red Barber is here: The Life and Legacy of a Broadcasting Legend

I read the book, and it is thorough, that’s for sure. I’d like to say a good word for Tom Hoffarth–his annual month of reviews is great.

I recall Lindsey Nelson saying once that Red worked at being a personality, but Mel Allen was natural. And I think that’s true–you wouldn’t think on the air that Red would be as cold (maybe shy, too?) as he was off the air. Then again, Mel sounded so sure and confident on the air, and off the air apparently was no nice and unsure of himself.