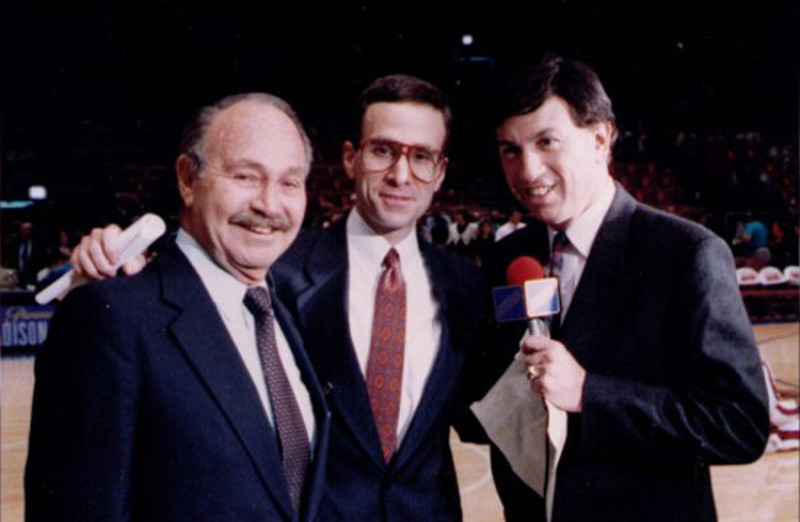 While in college, I had the golden opportunity to meet Marty Glickman, the peerless voice of the New York Giants, unmistakable dean of New York play-by-play and America’s pioneer basketball announcer. As our eyes first met, Marty was reading a book on Richard Nixon. He set it on the table, greeted me warmly and muttered, “That tricky Dick!”

It was a fall Sunday morning and he unexpectedly asked me to join him in the Giants’ radio booth where he embroidered a descriptive masterpiece; stitching together the game’s heft and beauty; the battles in the trenches and the sprints in the open field. In those many years of television blackouts, Glickman‘s riveting play-by-play helped popularize the NFL in the New York area.

When the game ended that day, Marty was noticeably drained; slumped against the back of his broadcast seat. After he gathered his strength and pushed himself to his feet, he made an unrehearsed lasting point, “I feel like I just played this game.”

Through the next couple of decades, I realized what set Glickman apart from most football announcers. It wasn’t just the tenor of his voice, his pulsating cadence or perfect phrasing; rather his call of the ground game, the bodily essence of football, where men sacrifice themselves for mere inches.

Having starred on the gridiron at Syracuse, football was in Marty’s blood. The routine, corner-cutting radio call, “Bradshaw gives to Pearson and he picks up three yards to the 30-yard line,” made him cringe. “Emotionally distanced, after the fact and skeletal,” he might say.

Marty’s portrayal was quivering and visceral. It transformed radio listeners emotionally, right into the thick of the scrum where contorting bodies fought for every precious edge. “Pearson SMASHES off his own right guard, BANGS off a defender, – for 3 HARD yards down to the 30-yard line!” As the gifted writer George Vecsey said, “In the fall, I loved to shovel leaves in the yard and listen to Marty on a transistor radio.” So did hundreds of thousands of New Yorkers.

When I asked Glickman how to best build verbal powers, he provided an impromptu and evergreen suggestion. When walking down a city street, draw a word picture in your head; the architecture of the buildings, the sky, the people on the sidewalk and how they’re dressed.

Just before World War II when college basketball doubleheaders became a thing at Madison Square Garden, Glickman figured out how to describe the game on radio, something that had really never been done. Blending the court’s geography with the coaches’ lexicon, he presented basketball colorfully, rhythmically and cogently. The late New York sportscaster Jim Gordon said that when the NBA was formed in 1946, announcers all over the country scrambled to find recordings of Glickman’s basketball for use as a primer; when to pause and how to deliver punchlines.

By the 1970s, Glickman was hired by HBO and NBC Sports to coach their star announcers. Working with lofty egos, Marty was disarming but frank; evolving into somewhat of a Lee Strasberg of sports broadcasting. He could identify finer points and fundamentals, much the way scouts break down players. In passing one day, Marty told me that Dick Enberg sounded like he was always smiling, an infectious on-air attribute that made viewers comfortable and upbeat. He added that Bob Costas is encyclopedic and doesn’t ever grope for a word.

HBO’s 2013 documentary, Glickman, is worth downloading. It is filled with many genuine testimonials from announcers and others with whom he interacted, his confrontation with prejudice at the 1936 Berlin Olympics and his later broadcast accomplishments.

Vin Scully started his brilliant play-by-play career in Brooklyn in 1950 when Marty hosted Dodgers’ pre-and post-game shows on radio. “We didn’t know each other well. Marty worked in the studio and I was at the ballpark,” Vin shared with me recently. “But I admired him. He was great on football and basketball broadcasts.”

As a coach, Marty worked with a “Who’s Who;” Marv Albert, Dick Stockton, Joe Namath, Costas and Enberg, to name a few. He coached grown men, women trying to make an on-air mark and budding college announcers at Fordham University.

In New York, where the radio booth at Madison Square Garden is named in his honor, Glickman influenced generations of talent. This endless list includes Sal Marchiano, Bob Papa, Bruce Beck, Len Berman, Sam Rosen and Spencer Ross, the first voice of the New Jersey Nets who told the team “If I’m hired, I will call the games in the style of Marty Glickman.” Ross was hired on the spot.

Marty looked after those he helped. Detained in Europe in 1963, he asked Albert, 21, his statistician and star pupil, to fill in for him on a Knicks-Celtics broadcast. Only half kidding years later, Marv said that Marty could have made it to the game but used the trip as an excuse to give him his first ever NBA assignment.

As radio closes in on its 100th birthday in 2020, it’s difficult to identify a sports announcer who touched the lives of so many, personally and professionally, on-air and off. Marty himself would have turned 100 on August 14th. He passed away at age 83 in 2001.

Hours before “The Game of the Century” in 1985, when #1 St. John’s faced #2 Georgetown at Madison Square Garden, Marty called me with unprompted advice, “Don’t overhype the game tonight. Just describe what you see. Fans already know it’s huge.”

I remembered those words when I found a YouTube recording of Glickman’s 1963 broadcast of the Giants’ final regular season game against the Pittsburgh Steelers. Big Blue was fighting for a spot in the NFL championship game and the buildup was enormous.

Marty focused exclusively on painting the radio canvas; the icy conditions, some players wearing cleats and others sneakers and how snow was piled against the fences, away from the sidelines. His stentorian voice rose dramatically of course when Frank Gifford made an ankle high, lurching reception on the run, to propel a Giants drive.

No hype. Just Marty, a true Olympian; on the field, behind the mike, as mentor and with generosity.

Happy 100th! Heaven is richer because of you.