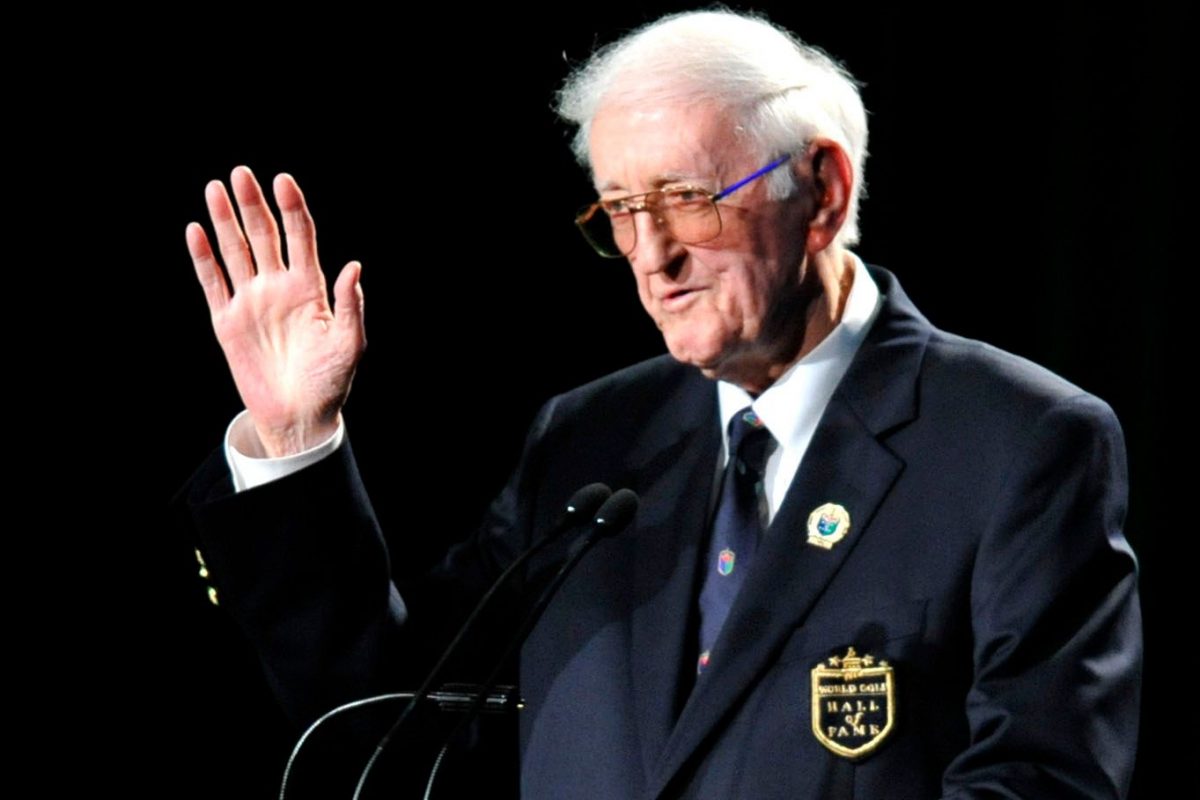 For those unfamiliar with him, Dan Jenkins was a preeminent sportswriter, associated for years with Sports Illustrated when the glossy weekly was must reading and its scribes represented the gifted of the gifted.

Think Frank Deford, Rick Reilly, Peter King, Robert Creamer, Paul Zimmerman and brilliant others, just too many to list.  In the publication’s heyday, millions of readers would eagerly rush to their mailboxes to grab an then devour SI’s latest issue.

Jenkins was best known for covering college football and golf. How big was he? When Notre Dame opted to run out the clock against Michigan State in November,1966, ending the game in a scoreless tie and securing a tie for the national title, Jenkins wrote somewhat disparagingly, “Old Notre Dame will tie over all.” The school’s student body didn’t take too kindly to it and burned thousands of copies of the SI issue.

He’s also been indirectly credited for popularizing golf’s big four tournaments through thorough and prolific coverage of each championship, every year. As such, Jenkins underscored the label, ‘majors.’

A month ago, Dan Jenkins passed away at the age of 90. He was probably the best golf writer the sport had ever seen, and he was in his usual spot at Augusta National for the previous 68 straight Masters.

Growing up in Fort Worth, he used to watch Ben Hogan practice at Colonial and got to know him as well as anyone after playing dozens of practice rounds with the great pro. Jenkins was also on the varsity golf team at TCU.

I began writing for CBS Sports in 1977 and got to know Dan a little bit. At that time, Jenkins was living in Manhattan writing for Sports Illustrated. He had already written “Semi-Tough,” the huge best seller and probably the funniest sports book ever written. He held many gab fests at his neighborhood hangout, Elaine’s, and was nice enough to include me several times.

A few years later I was sent to the Masters and I was smart enough to follow Jenkins’ lead on where to go. Every morning he’d eat breakfast in Champions’ dining room and watch the closed circuit coverage on TV.  When comfortable he’d head out to the course then the press tent for the late-day interviews. What was amazing was that he saw the same golf and heard the same quotes as everyone else and consistently wrote the pants off them all.

He saw and knew all the greats through the years and thought by comparison that today’s pros were spoiled. In 2001 he told Golf Digest why: “The equipment is better. The ball is hot. The courses are so much better maintained now. The greens are immaculate. They seldom get a bad lie in the fairway. They play ball-in-the-air golf. Drive it 300 yards, and hit to a target that will hold anything.”

He was also one of the first to identify Tiger Woods as the best ever. In that same 2001 interview he said, “I never thought I’d ever see a greater shot-maker than Hogan or a greater winner than Nicklaus, but I have. It’s Tiger. Not that I still wouldn’t want Ben to get the drive in the fairway for me, for my life. But Tiger makes all those other slugs out there today look like they don’t even know how to play. We’re talking about a truly remarkable athlete here. Something the game has never seen. Only two things can stop Tiger–injury or a bad marriage.”

In, 2014, when Tiger was in the process of reconstructing his personal and  professional life, Jenkins penned a pretend interview with Woods for Golf Digest. The piece didn’t sit well with Tiger who demanded an apology from the magazine.

Tiger’s comeback from both injury and a broken marriage was something to behold Sunday. Too bad Dan Jenkins wasn’t there to see it.

In the Fort Worth Star-Telegram, Mac Engel wrote a wonderful piece on Dan Jenkins:

Jenkins also wrote one of the greatest pieces I’ve ever read about televising golf, for SI, about the 1966 Masters, now best remembered for when Jack Whitaker referred to “a mob scene” and Clifford Roberts banned him. But Jenkins did a lot there to boost both the tournament and how Frank Chirkinian invented television coverage of golf (and he included Bob Dailey, who never got enough credit for his role in the golf coverage).