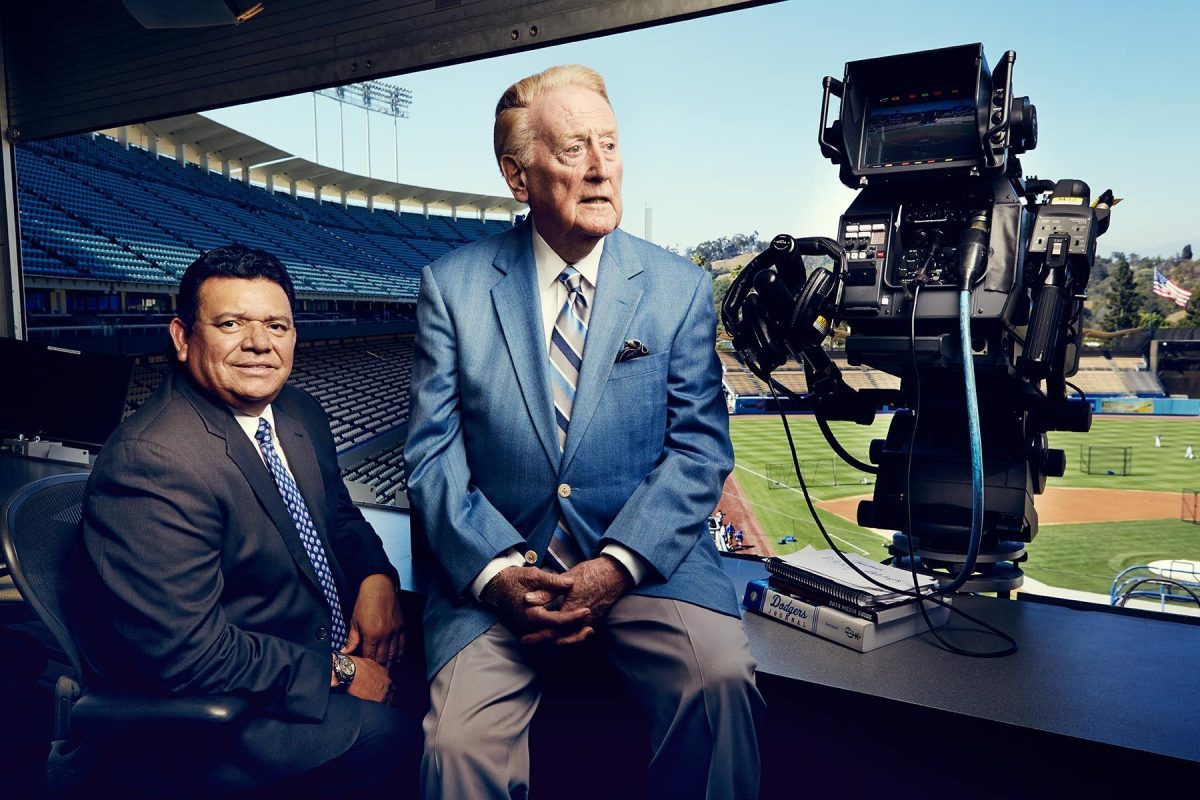 Fernando Valenzuela and Vin Scully - After the rookie sensation produced a no-hitter in 1990, Vin exclaimed, "If you have a sombrero, toss it to the sky!"

As mid November approaches, we can officially look back on the MLB season with Houston emerging as champs  in six games over Philadelphia. A name that has turned legendary, Dusty Baker finally earns a World Series ring, adding it to his impressive resumé. The doubters of the Astros’ most recent title in 2017 can now be put to rest. While the classic this past week created some history of its own, let’s now relive some of sports’ most historic moments that happened during this week in years’ past.

Fox’ play-by-player, Joe Davis was a man of much more vigor, handling his first ever full Series

The legendary New York Yankees’ catcher Elston Howard was the first African-American to win the American League MVP, recording a batting average of .287, 28 home runs and 85 RBI. Howard made baseball history as the first African-American to wear the pinstripes of the New York Yankees in 1955. It was after the color barrier was broken in 1947. In Howard’s 1963 MVP season, only 11.7% of MLB players were black. Over the course of his career, Howard won 4 World Series titles, 2 Gold Gloves and made 12 All-Star appearances.

In 1963, Mel Allen was the lead television and radio play-by-play broadcaster for Howard’s MVP season, alongside Red Barber, and Phil Rizzuto. It would also be the first of Jerry Coleman’s seven season in the Yankees booth. Allen was chased out after the 1964 campaign.

Hall of Fame outfielder Frank Robinson became the first MLB player to ever be awarded the AL and NL MVP, winning the award after the 1966 season, playing for the Baltimore Orioles. On top of his two MVP Awards, Frank won two World Series and the triple crown, made 14 All-Star game appearances, and later went on to also earn Manager of the Year. Robinson is regarded as one of the most accomplished players of his era, having 2,943 career hits and 586 home runs. The 1966 season was one of Robinson’s best. The Orioles also swept the World Series from the Los Angeles Dodgers.

It was the first year that a network voice would dominate the call, NBC’s Curt Gowdy. Vin Scully joined him at Dodger Stadium and Chuck Thompson in Baltimore. Vin wasn’t too happy about NBC’s decision. He and Chuck did their teams’ road games on national radio, NBC.

In what is regarded as one of the biggest upsets in boxing history, Evander Holyfield defeated Mike Tyson in 11 rounds by TKO to win the WBA Heavyweight title. The fight took place in the MGM Grand Garden Arena in Paradise, Nevada, Going into the fight, the odds were strongly in Tyson’s favor at 25-1, yet Holyfield was able to defeat Tyson to win the heavyweight title for the third time in his career, something that had not been achieved since Muhammad Ali. This matchup led to their iconic rematch in 1997 where Holyfield won by disqualification when he was bitten by Tyson.

1940: Steelers and Eagles Play One of Four Ever Penalty Free Games

The Pittsburgh Steelers were able to capture a 7-3 win over the Philadelphia Eagles, a game of at least four, without any penalties. This game is also the most recent iteration of such a feat occurring in the NFL.

Byrum Saam and Bob Hall were the Eagles broadcasting pair on radio while Joe Tucker did radio for the black and gold. Both teams did not have impressive seasons with the Steelers finishing 2-7-2 and the Eagles finished 1-10. Eagles quarterback George McAfee would later go on to be inducted into the Pro Football Hall of Fame.

Dodgers starting pitcher Fernando Valenzuela became the first ever rookie pitcher to win the Cy Young, an award given to the best pitcher in each the AL and NL. He was the rave of the game that summer. A native Mexican, Valenzuela started in 25 games of which 11 were complete and eight were shutouts. He recorded 180 strikeouts and had an ERA of 2.48. Over the course of his illustrious career, Valenzuela also notched six All-Star appearances, a Gold Glove, two Silver Sluggers and helped the Dodgers win the World Series in his Cy Young year, his first season.

One of Fernando’s highlights was on June 29th 1990 when he threw a no-hitter against the Cardinals. Leave the rest to Vin Scully. Just after got it done, he exhaled on-air in celebration, “If you have a sombrero, toss it to the sky.” Dodgers fans on radio,

Vin Scully was the voice of the Dodgers during all Valenzuela’s seasons and is regarded as the greatest broadcaster of all time. Fernando is now a Dodgers Hispanic announcer. Vin and Valenzuela would threw out a first pitch together at Dodger Stadium in 2017.