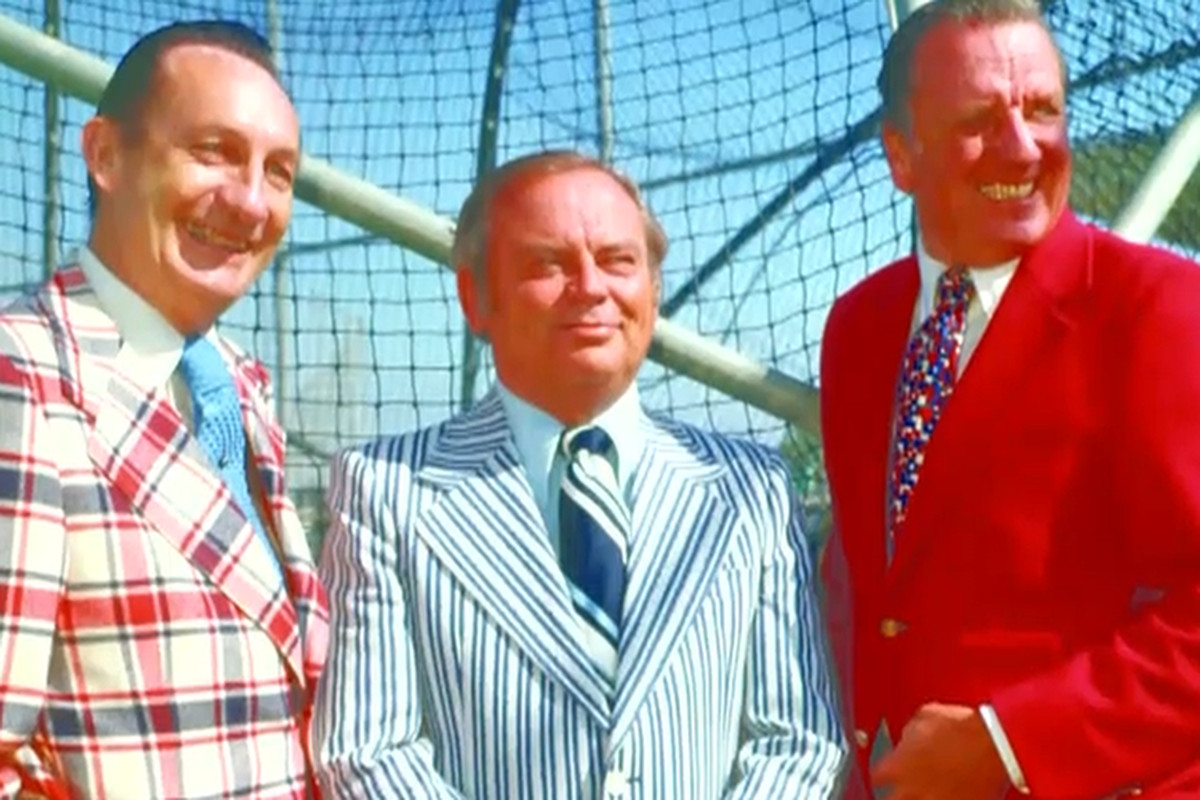 Lindsey Nelson, Bob Murphy and Ralph Kiner (l-r), the popular trio in the Mets booth from 1962-78

Lindsey Nelson would have turned 100 tomorrow, May 25th. Beginning in the 1950s, Nelson graced play-by-play television and radio microphones nationally and locally for four decades. He is one of only four men to receive the Pro Football Hall of Fame‘s Rozelle and Baseball Hall’s Ford Frick Awards, (Curt Gowdy, Jack Buck and Dick Enberg).

In New York, Lindsey will always be remembered as one of the three initial voices of the Mets. In the rest of the country, Nelson was known for his football broadcasts. He did tons on network television and radio, and was used often by NBC and CBS on both the NFL and college football.

During their early overlapping years in the Yankees booth, Red Barber pontificated, Mel Allen emoted happily, Phil Rizzuto brought a neighborly warmth and Joe Garagiola blamed the Yankees demise on “termites in the bat rack.” Nelson said, “We didn’t have to be funny. Our jokes were down on the field.” The Mets were notorious for futility until the late 60s.

While Nelson was excellent on radio, his strength was television. Lindsey said, “On television, you simply write cutlines for the pictures. On radio, you paint the whole canvas with words, pace and information.”

On television, the Mets were an immediate hit. When Lindsey learned that the Mets were planning to carry 120 of their 162 games on the tube their first year, Nelson took advantage of the growing number of color television sets. He started wearing garish and lurid sports jackets that he bought off the rack. It drew attention away from the staid air crew at Yankee Stadium. You’d mention Nelson and many would say, ‘Oh, the guy with those loud jackets.’

When Lindsey was honored with the Frick Award, the Hall’s spokesperson Bill Guilfoile aptly said of the jackets, “They clashed with his soft southern drawl.”

Nelson said that the two New York baseball teams “were a clash of competing cultures. The Yankees represented dignified efficiency and the Mets represented futility but were unwilling to recognize and admit it.”

Like other human beings, Nelson dealt with family issues. His older daughter, Sharon, was born with Down syndrome. His beloved wife Mickie died suddenly while on vacation in Spain. His longtime Mets statistician Art Friedman said, “Lindsey couldn’t handle booze. He had been on the wagon for twenty years. But when Mickie died, he was off the wagon for a while. One drink and he was out”

Nelson was very private. Kiner said, “As friendly as we were, I never felt I really knew him.”

After the 1978 season, Nelson left the Mets unexpectedly and joined the Giants broadcasts where he followed legendary announcers like Russ Hodges, Lon Simmons and Al Michaels. After three short seasons in San Francisco, he told a writer, “I have been a stranger in a strange land.” He was gone. It was the last baseball he did.

Longtime Notre Dame fans remember the years when live college football on network television was limited. So on Saturday nights, Fighting Irish games were shown in a recorded, condensed version of one hour. Lindsey voiced them and is often heard saying, “As we pick up the action later in the quarter…”

Nelson passed at age 76 in 1995, after suffering for years from Parkinson’s. Like many other early network television sportscasters, Lindsey was a member of Tom Brokaw’s Greatest Generation. He grew up during the depression and served the country in the European theater during World War II in a correspondent’s and communication role. He was always fascinated by the military. In his seasons doing the Mets, he was known to often have a military related book with him on airplanes and bus trips.

Nelson was born and reared in Columbia, Tennessee and was hardly a child of the privileged. His dad was a traveling salesperson and Lindsey’s mom was in his words, “the greatest influence on me.”

As a student at the University of Tennessee, he “devoted every waking moment to thoughts of the Vol fortunes on the gridiron.” He tutored athletes in freshman English, spotted for the radio announcer and was a stringer for newspapers. In other words, he got hands-on experience early.

When the Vols advanced to the 1940 Rose Bowl, Nelson, a student at the time, traveled to Pasadena and served as a spotter for NBC Radio’s Bill Stern. Ted Husing and Stern were then America’s top two sports announcers. In his early years on-air, Nelson considered himself a protégé of Stern. Their play-by-play styles were somewhat similar. Both were upbeat, called games enthusiastically and did so with a sense of urgency.

After the war, Lindsey returned to Knoxville where he broadcast minor league baseball and University of Tennessee football games. In 1950, for that matter, Nelson met Vin Scully who was in Knoxville to cover the Alabama-Tennessee game for CBS Radio. Scully had begun doing the Dodgers the summer before. Lindsey was also an announcer for the Liberty Network which recreated baseball games. In one thirty-day span, he recreated 62 games. It’s nice to be young!

A big break came in the early 50s, when he was hired by Tom Gallery who was the first ever administrative director of NBC Sports. In a hybrid role, Lindsey did lots of supervisory work for Gallery, called college football games and beginning in 1957 teamed with Leo Durocher on NBC’s Game of the Week. He also was the play-by-play announcer for the network’s NBA broadcasts.

Nelson went through mostly ups in his career and a few downs. On network TV, he did Cotton Bowls year after year, the Rose Bowl and two World Series when the Mets qualified, in 1969 and ‘73.

In his wonderfully written autobiography, Hello Everybody, I’m Lindsey Nelson, he writes “Networks have a unique way of dealing with situations in which they have people that they have decided for some reason or other not to use. The weapon is silence. You just don’t hear from anybody.”

Bob Costas labeled Nelson, “a cheerful chronicler.” One of Nelson’s later assignment was doing the NFL on CBS Radio. Lindsey would always paint an environment of infectious enthusiasm. Fans got a sense that he’d rather be nowhere else other than the ballpark. I can recall a game he did from old Candlestick when the Niners were dominating the NFL. Lindsey: “Wherever you went around San Francisco this morning, the subject of conversation was this 49ers team. Whether it was the hostess turning over the tables at a restaurant, the cab driver or the doorman, they all wanted to talk about Joe Montana and today’s big game.”

He never changed. Early in his career as he was just beginning to surface on the national scene, Variety wrote, “Lindsey Nelson has been touted for many years as one of the tip-top grid casters. Precise, methodical and efficient, he may not have the color of Bill Stern, the heartiness of Mel Allen, the analytic powers of Red Barber or the glamour of Ted Husing, but as an information purveyor who’s right on top of the play, he’s almost prescient, the peer of any and the superior of many.”

As time evolved, Nelson developed his own friendly personality on-air and was loved by many throughout the country.

The baseball stadium at the University of Tennessee is named in Lindsey Nelson’s honor.

I’m not convinced that Lindsey was wearing the loudest jacket in that photo. I have his autobiography, and cherish it, and I will tell a funny story about it that I wish he had been able to know. I had a friend, Stanley Hirshson, a historian at Queens College, who was writing a biography of Patton. I told Stanley, who certainly knew of Lindsey, about the book and copied the relevant passages. He cited him in his book! I never got to hear Lindsey do baseball for a team, but I did when he did the wonderful CBS Radio Game… Read more »

Nice look at a great announcer I really admired, but I would not have used that word you used to describe his daughter.

I appreciate your comment and changed the wording accordingly. This said, Sharon was born in 1948 and Lindsey wrote his autobiography in 1985. In Lindsay’s words, “He (the pediatrician) was telling me that our daughter was irrevocably retarded.”

One of the all-time best surely, a real pro. I remember when I handled between innings commentary (scores, updates) for some Mets games that were broadcast on commercial-free WNYC Radio. The trio, Nelson, Kiner and Murphy, knew there was exactly one minute before the next inning started and the only one of the three who consistently knew the precise time to break in/out was Nelson. Listening to Mets games from their inception, I believe he coined the phrase “The carousel will be in motion” on a bases loaded 3-2 pitch which Howie Rose continues to use. I also recall his… Read more »

Lindsey is considered along with General Neyland, as the father of the Vol Network that broadcast University of Tennessee football games across the state well before many schools beyond Notre Dame had networks of stations chronicling their teams’ games. He was the network’s original announcer before moving on to do Notre Dame games and giving way to George Mooney (father of the Vol Navy) and the fabulous John Ward. Lindsey wanted to call it the Volunteers Network but Neyland preferred Vol Network.

The 1954 Cotton Bowl game that Lindsey called on TV featured perhaps the strangest play in football history when Rice’s halfback Dickie Moegle took a handoff and was running clear along the sideline, probably heading for a TD, when a “12th man” Alabama’s Tommy Lewis came off the team’s bench and tackled Moegle in stride. Story goes that Lindsey apparently was reading the rule book the night before the game and happened to stumble across such a play, the only one where an official could actually award a touchdown, which in this case, they did (after a lot of confusion).… Read more »