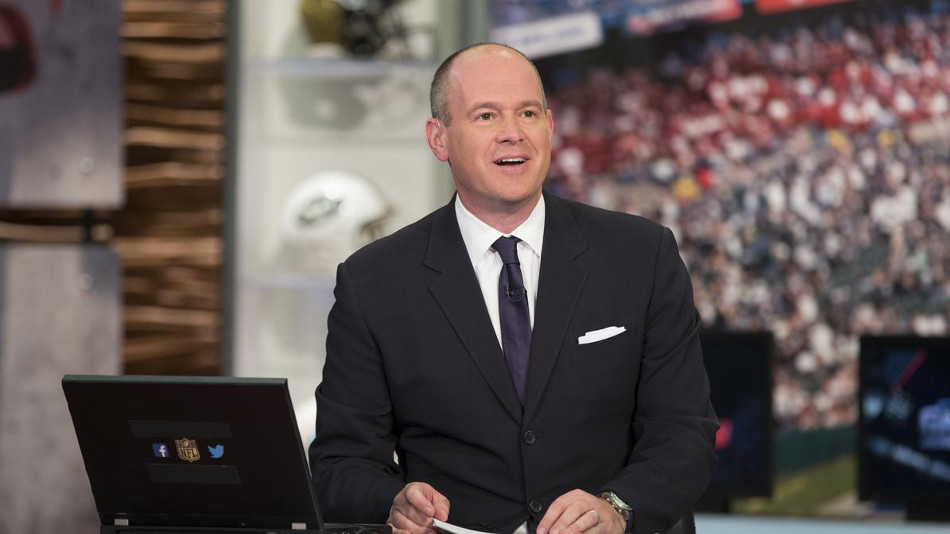 NFL Network
He now calls Hollywood home and hobnobs with the likes of Jimmy Kimmel, Matt Damon and other stars of sound, stage and screen. But it didn’t start this way. From a Coney Island egg cream to the Verrazano Bridge, Rich Eisen was born in Brooklyn and grew up on Staten Island.

He took the leap to the University of Michigan to pursue his undergraduate degree before pursuing his masters at the Medill School of Journalism at Northwestern. By most standards, Eisen had the training by then, but he didn’t look to jump in front of a camera immediately. Rich continued to sharpen his skills as a journalist.

Not many of his preening colleagues would have, yet Eisen continued to pay his dues. He first took a job as a reporter for the Staten Island Advance, the borough’s daily newspaper and then assumed a gig with the Chicago Tribune.

He’ll tell us in this Q&A that learning to write and doing so against deadlines helped prepare him for his later successes, first at ESPN and now at NFL Network. He got his first taste of television in the mid-90s in Redding, California.

I’m delighted that Rich covered a lot of ground with me on one of his busiest weeks of the year. Yes, this is Super Bowl week and Eisen is the face of NFL Network.

Broadcasters today don’t necessarily start as writers. You did. You wrote for the Staten Island Advance and later the Chicago Tribune. When did you determine that you wanted to pursue broadcasting?

I’ve always wanted to be in sports broadcasting, especially after I learned at a very young age that, in order to be a part of the highest American sports echelons, I would have to do something other than make a jump shot or hit a curve ball. I would call the action of stickball games and baseball games with my brother and classmates growing up on the (not so mean) streets of Staten Island, NY.

My broadcasting idols as a kid were Howard Cosell (for real) and two local sportscasters who I rip off every single day: WPIX-TV sportscaster Jerry Girard (his wit was as dry as the Sahara) and a WNBC-TV sportscaster named Marv Albert. I’ve been fortunate to have Marv on my daily TV/radio simulcast and never miss a chance to tell him “thank you”

All that said, I tell anyone who asks me about getting into sports broadcasting that their first order of business should be how to learn to write. And write on deadline. I loved my experiences working for the Staten Island Advance, but while doing so, always dreamed of the career I’m fortunate to have now.

How much of your career’s success do you owe to Steve Bornstein, a former boss at ESPN, who made you the face of the NFL Network – as it evolved in the 2000s?

I’ve always called Steve Bornstein my “rabbi” but also remind him that he’s an all-time Hall of Fame great broadcasting executive for the mere fact that he was brilliant enough to have hired me twice. (Eisen worked for Bornstein at ESPN from 1996-2003)

Any trepidations leaving ESPN? You had salient visibility there at a time ESPN was at its height of popularity. Why did you take the leap of faith with NFL Network in 2003?

Parting ways with ESPN was filled with trepidation, but with this caveat: I was moving from Bristol, CT to Los Angeles, CA to work for Steve Bornstein to launch a network based solely on coverage of the most popular sport in America as it was still exponentially exploding in popularity. So, if it was a risk, it was a highly calculated one with, as they might say in the National Football League, major upside.

Plus, SportsCenter, as I had known it, was a dying format, based more and more on argument-driven analysis and not on the cleverly-written-word/highlight-driven program that we had all come to love. Much of that was based on management’s belief at the time that people were coming to the show, having already known the results of a game and having already seen the way it played out, thus were more curious to know WHY something happened rather than WHAT happened.

All that, combined with the duties being offered to me at the time compared to the toys in the ESPN chest I thought I deserved to play with combined to hasten my departure. Please do know that I cherished my time at ESPN and met my wife there.

Your wife Suzy Shuster Eisen is a sportscaster too. You and she host a weekly podcast. It’s called ‘Not Just Sports.’ What are dinnertime conversation like?

Our dinnertime conversation is just like everyone else’s: making sure our kids have the best manners and eat their growing foods. The only difference is Suzy can wax rhapsodic about her days covering the Sugar Bowl, the world champion Anaheim Angels and the multiple title-winning Lakers as well as fill-in on my daily show when need be or book the likes of Mark Wahlberg, Paul Rudd, Shaquille O’Neal and Bob Saget for our podcast, as she did in the past couple of months. She’s the best and broadcasts with the best of them.

Since 2014, you have been doing a daily simulcast, one that’s part radio show and part sports/entertainment television talk-show. Your history is steeped in television. What was it like to transition to part radio? What does the show enable you to do that you can’t do on NFL Network?

Content-wise, what the show enables me to do that I can’t do on NFL Network is to opinionate rather than merely play traffic cop, but more importantly it allows me to directly connect with fans. Nothing beats talking with real people. I love it. The show also allows me to talk to guests that wouldn’t normally appear on a straight up sports show.

Some of my favorite interviews — and our most downloaded videos — have involved celebrity guests talking about a popular movie or TV show of theirs. It’s truly allowed me to broaden the number of topics I can endeavor to bring home to people while also broadening the platforms on which to bring it — the live radio/TV discussion gets chopped up into bite-sized videos available on Twitter, Facebook, Instagram, YouTube and also an available Apple App Store/Google Play Rich Eisen Show app. Then there’s the podcast version of the show to add an on-demand element to the listening. All backed up by AT&T, just as it is a growing leader in the field of content creation and distribution. Can’t beat it.

Any desire to do play-by-play?

Immense desire. Immense. Calling NFL play-by-play is next up on my career checklist. As I said, I first fell in love with sports broadcasting by listening to Howard Cosell on Monday Night Football. Also had great memories calling a dozen or so baseball games for ESPN.

Do as many people in public recognize you today as they did in your ESPN days?

I do still get people humming the SportsCenter theme to me while going through airport security. And, I’m typing this minutes removed from a Rich Eisen Show meet/greet with Minneapolis dealers involved with our show’s main sponsor, Honda. Two local dealers told me they watched me on SportsCenter while “growing up.” They’re both 29. I did the math. They first watched me on ESPN when they were 7. It made me feel quite old. And I’m 48.