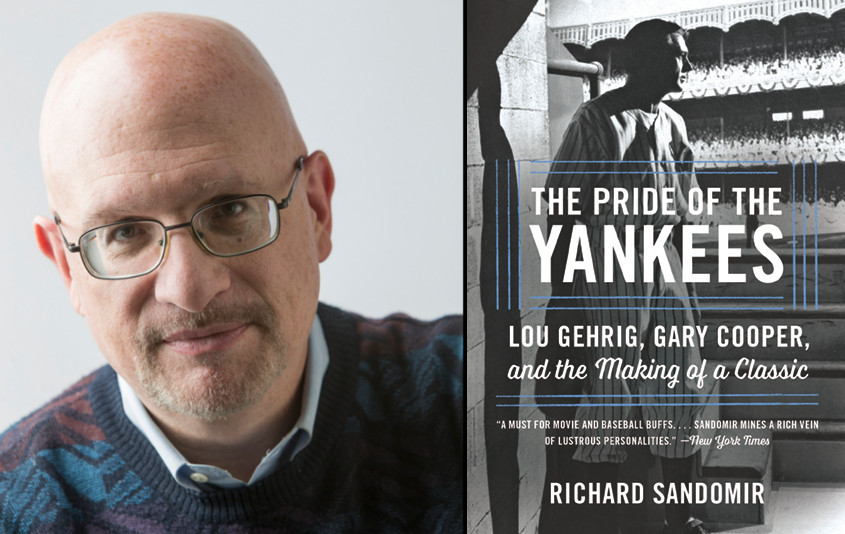 Richard Sandomir is a born and bred New Yorker and a product of CUNY’s Queens College. He spent 25 years covering sports media for the New York Times. His critiques carried significant weight with sports broadcast executives.

Sandomir’s writing style ran the gamut. He referenced subjects and performances in both the everyday and the esoteric; whether cataloging Chris Berman’s acts as “clownish” or labeling Roone Arledge “a redhead Yoda.”

In his valedictory before moving to the Times’ obituary department in 2016, Sandomir shared experiences on the beat that he thought were special; from visiting Jim McKay’s horse farm to conducting a no-holds barred interview with Pat Summerall. But he added a kneejerk frustration that he won’t miss.  “I don’t need to listen to another Mel Kiper Jr. conference call forecasting the 25th pick in the first round.”

Sandomir is no novice at authoring books; he’s written a handful. His The Pride of the Yankees: Lou Gehrig, Gary Cooper, and the Making of a Classic was released in hardcover a year ago and is now available in paperback. It covers the intersection of a Yankee icon, a popular movie, the selection of the lead role actor and actress and World War II.

In our Q&A, we covered the book and his years on the sports media beat.

​Was Lou Gehrig a little like Joe DiMaggio, terribly concerned about his image? Or was it just his widow who was eager to perpetuate his image of greatness?

No. He had a very good relationship with the press that connected nicely to the fact that he was a great ballplayer, a very decent guy and a terrific ballplayer. There was little for Lou to worry about from a much tamer press back then. Eleanor was a tougher and more worldly person who found in Lou the love of her life. She became the keeper of his legacy — anyone who has seen the volumes of scrapbooks she kept of his life and career knows that. During his illness she took care of him (along with her mother Nell) and after his death did her best to make sure his image stayed as untarnished as it was.

From the time she signed to make “The Pride of the Yankees,” she peppered producer Samuel Goldwyn with letters that sought to make sure that the baseball aspect of Lou’s life was handled accurately; sat down with the first screenwriter Paul Gallico for interviews that revealed stories of her life with Lou (where the negative portrait the film of Lou’s mother started forming) and lobbied Goldwyn to have Gary Cooper recite the “luckiest man” speech as Lou delivered it on July 4, 1939 (even if there was no actual copy of the oration).

Why was Gary Cooper selected to play the Gehrig role? He was hardly a huge baseball fan and not known for his athletic prowess.

He was a huge star of the day and in the final picture of his contract with Goldwyn. In that era, when the sports film genre was in its infancy, an actor’s athletic prowess was not much of a concern. (Witness William Bendix a few years later in “The Babe Ruth Story.”) Cooper recognized that playing Gehrig was a risk because memories of Lou — as a player and a man — were still so fresh. But Cooper specialized in portraying men of quiet dignity, like Gehrig, and Goldwyn didn’t want a baseball picture.

Goldwyn knew nothing about baseball but recognized in the Gehrig story one about courage in the face of death; Goldwyn also knew that there was a great romantic tale to tell about Lou and Eleanor. So, yes, Cooper spent six weeks being tutored by Lefty O’Doul in how to play baseball; indeed, Cooper, who did things right-handed had to be taught how to hit, catch and throw left-handed, like Gehrig. I think because he didn’t have to unlearn the habits of right-handed ballplaying, he learned enough from O’Doul to be a mediocre player. But there were perhaps 10-12 minutes of baseball action in “Pride.” In them, you rarely saw Cooper connect bat to ball and the long shots of Cooper were actually of Babe Herman, the former Brooklyn Dodger. There is no truly memorable baseball action scene in “Pride.” What we remember is the speech and the intimate moments between Cooper and Teresa Wright, who played Eleanor.

There were the Andrews Sisters, the Mills Brothers and tons of songs redolent of the war years. How about the Gehrig movie? It was released in 1942. Did it transcend sports in any way, connecting with women perhaps, whose husbands were off to the battlefields?

Goldwyn’s goal was to connect with women and he surely did. For a time, “Pride” was his highest-grossing picture, which almost certainly was because it attracted more than baseball fans to the theaters. It was promoted as a romantic picture, with very little publicity regarding its baseball aspect. The theme song, Irving Berlin’s “Always,” reinforced the film’s romance; even the dance number (which I feel slows down the film) by the team of Veloz and Yolanda, was included to broaden the appeal of the movie. Goldwyn did, of course, address World War II. The film was released seven months after the Japanese attack on Pearl Harbor and Hollywood was ramping up its production of World War II-themed films. “Pride” was not a war film but Goldwyn tried his best to connect Gehrig’s death to the battlefield losses in the European and Pacific theaters. After the opening credits of the film, there is a scroll, written by Damon Runyon, that says in part that Gehrig “faced death with the same valor and fortitude that has been displayed by thousands of young Americans on far-flung fields of battle.”

Making a sharp turn to the seemingly mundane, for years you covered sports media for the New York Times. At least two of your local colleagues, Bob Raissman of the Daily News and Phil Mushnick of the New York Post, seemed to agree on one thing. You were critical of John Sterling. In the late 90s, you characterized his work as “so unlistenable.” Have you changed your mind? Is he an acquired taste in any way?

Sterling is most definitely an acquired taste — with his home run calls, nicknames and missed calls. If I’ve changed my mind at all it is that I recognize his popularity with some Yankee fans and that some of his calls are amusing.

The New York Times has sets of stringent rules that are likely unique. One I believe is that writers can remain on a team beat for only a prescribed time, lest team loyalty clouds any journalistic neutralities. True? If so, do you agree?

There is no specific rule that says reporters can’t cover a team for a certain number of years. Editors by and large don’t want anyone to cover a team (or any beat) for an excessive number of years. I think the concern is less journalistic neutrality (regarding a team or a police beat or the White House) than getting too comfortable and not competing aggressively.

Times’ writers – almost as a job necessity – are versatile if not adaptable. You’ve been the media sports writer for so many years, now you’ve shifted to the obit desk. From sports, full of life, to the obits, full of gloom. Deadline dimensions are different too. How do you like it?

It’s been a terrific change. I get to write mini-biographies of an enormous range of personalities every day or two. I truly enjoy the variety; it’s never boring. And let me be clear: there is no gloom. Obits are one percent about death (the line where we write about the cause of death) and 99 percent about fascinating lives. Doing them is rather uplifting and inspirational — delving into the worlds of high-achieving people, most of whom I’ve never heard of. They’re great journeys of discovery that require fresh reporting and deep research.

Who was the most interesting media personality you covered and why?

That’s difficult to answer. I don’t think one person fits the bill. I always admired Bob Costas for his great work as well as the conversations we had that would include great issues of the day and the Three Stooges. Vin Scully was, well, Vin Scully. It was illuminating to talk to executives like John Skipper and Dick Ebersol who enjoyed communicating with the media and, critically, for my job, were almost always available to talk to. While I never talked to Walt Frazier very much, largely because my critiques of him were often quite harsh (for his crazy wordplay), we had one encounter that I’ll always remember.

I did a story about his astonishing wardrobe that required me to spend time in his apartment where he modeled various outfits and at one point I thanked him for letting me do this, considering all of my criticism of him. He said, with a smile on his face, “You called me Roget’s lost son. I liked that.” And one of my favorites was Stuart Scott who I only got to know after he got sick and (and went to his martial arts gym where he worked out). Our long conversations gave me a far better understanding of his on-air “shtick.”

I ask announcers who their idols were growing up. Which writers inspired you in your formative years?

Great article, have been wanting to read this book. Mr. Sandomir sure has led an interesting life.