There was once a Berlin Wall and an East and West Germany. That is history, and so are the sports rivalries that sprang from those days of divide.

The competition among athletes from opposite sides of the wall were fierce, fired further by the politics involved.

For U.S. swim teams, the East Germans posed a particularly tough rivalry, born of international competition, the Olympics being THE highlight of their matchups.

Swimmers Rowdy Gaines and John Naber were involved in this rivalry at the highest levels. They came to the competition in different eras, but both faced East German teams when they were at their best.

They remember the rivalry on this edition of THESPORTSRIVALS. 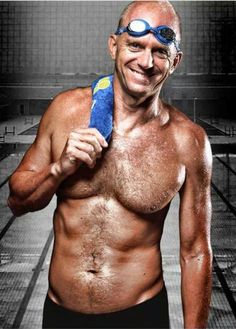 Rowdy Gaines (l) was the World Swimmer of 1980, coming from the collegiate program at Auburn during which time he began his representation of the U.S. in international events.

He won three gold Medals at the 1984 Olympics. His time in the 100 meter free style set a world record as did the 4 x 100 freestyle and 4×100 medley relay teams he anchored. He also collected nine national and two Pan-American titles.

There could have been more gold in his collection, but the U.S. boycotted the 1980 Olympics in which he would have competed.

His freestyle form garnered him the title of “The World’s Fastest Swimmer.”

John Naber (l) was the World Swimmer of the Year in 1976. He swam at USC from 1974 -1977 when the program won four consecutive national titles. He was part of arguably the most dominant Olympic team ever when in 1976 the men’s swim team won 23 of a possible 30 medals.

In their voices you will hear the depth of feelings regarding the East German competition. The mention of cheating by the East Germans generates some no holds barred discussion.

These are two of the world’s all time outstanding swimmers remembering a rivalry that went deep in their competitive souls.