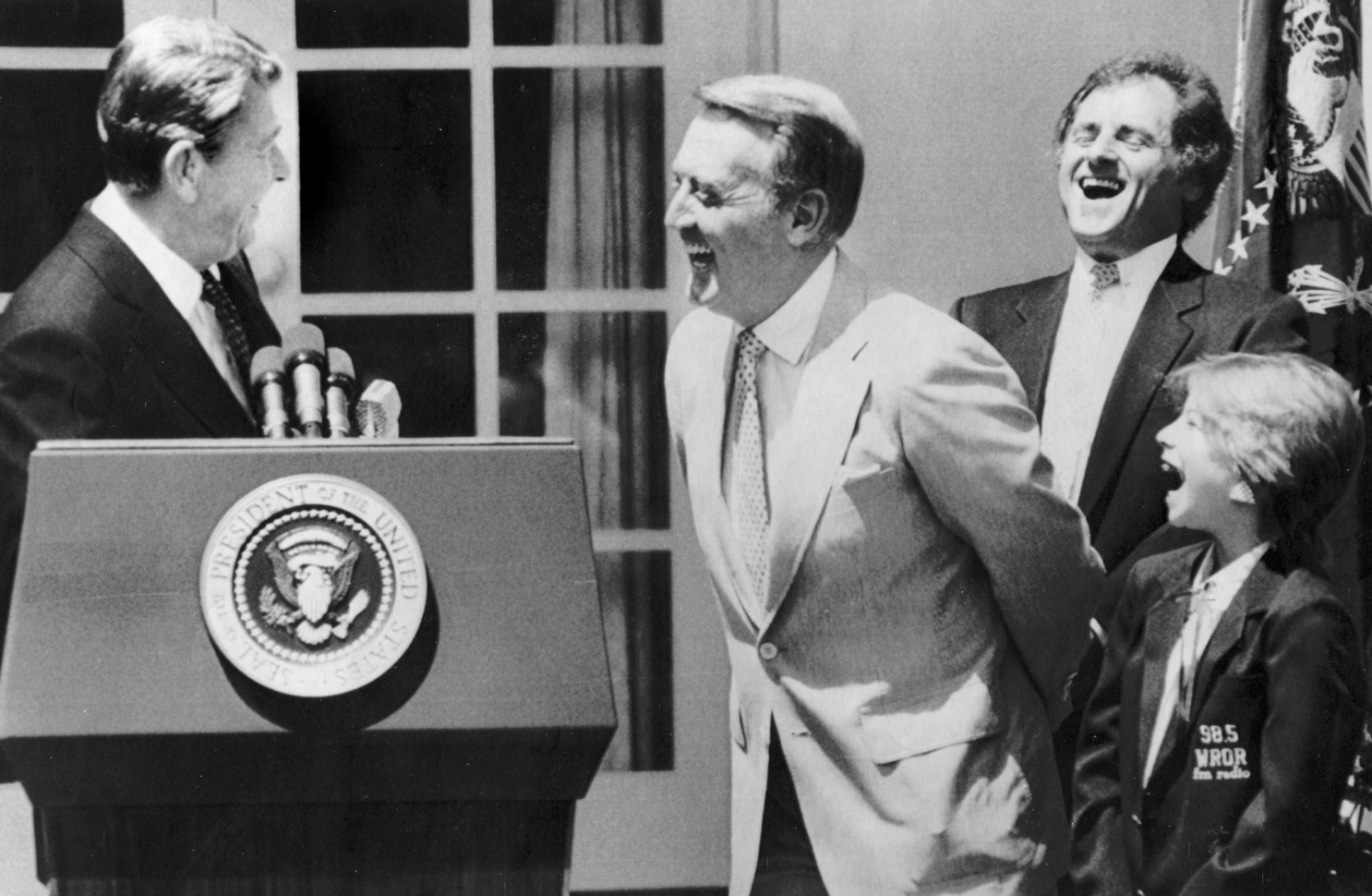 Ronald Reagan’s youth augured a prophetic twinning of sports and media: born, 1911, small-town Illinois; educated, Eureka College, where the bespectacled student got poor marks, but, as he said, “copped off the lead in most plays,” worked on the radio station, captained the swim team, and won three varsity football letters.

Reagan “never cared for [baseball] . . . because I was ball-shy at batting. When I stood at the plate, the ball appeared out of nowhere about two feet in front of me.” Football differed to the man whose chubby countenance led his father to name him the “Dutchman.” Reagan “[faced] no little invisible ball—just another guy to grab or knock down, and it didn’t matter if my face was blurred.”

Graduating, Reagan one day had to simulate the Drake University relays. Slated to speak after the sixty-yard dash, Drake’s president began his speech with runners still in the blocks. As they began racing, he kept talking. When the speech ended, Reagan must reinvent “the competition [they]’d missed.” Reminiscing later, he said, “I guess I did OK.” Reagan’s hero was Franklin Roosevelt, who used 1930s radio to combat fear. Reagan soon carried the Chicago Cubs and Big Ten football over giant WHO Des Moines.

WHO was the sole local outlet doing the Cubs to recreate, not air them live. Dutch got code from Chicago’s Wrigley Field in studio—”B2C” meant ball two, called; “S1S,” strike one, swinging—then fictively recreated a game he never saw. Once the wire broke. Reagan “knew that if we switched to transcribed music,” he said, “the listener would turn to a station doing the game live.” Instantly, he recalled the one thing not to make the paper—foul balls. A batter can hit a million fouls and still have two strikes.

According to Reagan, the batter fouled to the left, right, behind the plate, and outside the park—everywhere. A tornado neared. A fight occurred. None of it happened, but at home it seemed real. Finally, the wire revived, Dutch laughing as he read, “Batter popped out on first ball pitched.” Years later Reagan said, “Making things up, mixing fact and fiction. [Pause] What great preparation for politics!”

In 1937, the Cubs trained at South Catalina Island, near Warner Brothers Studios in Hollywood, Reagan wanting “to get into pictures.” He took an audition, was hired, and began a career of fifty-four films, including 1940’s Knute Rockne All American, Reagan as doomed Notre Dame football player George Gipp (thus “the Gipper,” another lifetime moniker.) In 1981, as president, Reagan gave Notre Dame’s Commencement speech, saying, as he had in the movie, “Win just one for the Gipper.”

In the 1950s and early ’60s, Dutch hosted TV’s Sunday General Electric Theater and Death Valley Days. By 1962 the Democrat who voted four times for FDR had joined the GOP, trouncing Pat Brown in 1966 by a million votes to become governor of California. In 1980, he was elected president. Next March, Dutch was shot and almost killed, telling doctors in surgery, “I hope you’re all Republicans.” Three days earlier he had hosted an East Room luncheon for thirty-two retired Baseball Hall of Famers, evoking his 1952 film The Winning Team, as pitcher Grover Cleveland Alexander.

Reagan told of Alex being hit in the head by a catcher’s throw, losing most of the 1918 season, braving double-vision, and “trying to find some way he could pitch.” Desperate, he asked for a tryout, went to the minors, and was told, “Go to the mound and throw a few.” Dutch explained that after the manager grabbed a catching mitt, the first pitch broke three of his ribs, Alexander trying to cure his double vision by using only one eye to throw. A friend asked what happened. Alex said: “I closed the wrong eye.”

“The Great Communicator” was a sports-avid president. He gave the Presidential Medal of Freedom to Jackie Robinson and football coaches Army’s Earl (Red) Blaik and Alabama’s Paul (Bear) Bryant. He began the yearly rite of hailing major pro and college titlists—Reagan invariably funny on command. He tossed the coin before 1985’s Dolphins-49ers Super Bowl XIX by satellite and helicoptered to Baltimore to toss the Orioles’ opening pitch, keeping baseball interest alive in the DC area after the Senators had skipped town.

In 1988, about to leave office, Dutch segued to a turning point of his past: Wrigley’s “Friendly Confines,” with Harry Caray. Reagan did an inning and a half of play-by-play, the old play actor saying, “You know, in a few months I’m going to be out of work, and I thought I might as well audition.”

In November 1994, Reagan wrote a public letter revealing his Alzheimer’s disease. “When the Lord calls me home,” his hand-written craft ended, “whenever that may be, I will face it with the greatest love for this country of ours and eternal optimism for its future. I know that for America there will always be a bright dawn ahead.” He died in 2004.

Well, as a Lincoln scholar, I MIGHT raise a question about that poll … 🙂 But as Lincoln might have said, he could have stayed in more honest work!

A great piece, and I’m reminded, too, that Reagan called in to the Cubs broadcast the day Harry Caray returned from his stroke, and popped up on NBC’s All-Star Game coverage in 1989; I guess after auditioning with Harry, he decided to try it with Vin.

I’ve suspected that if DC had had a team when he was president, he might just have been a regular at the ballpark.