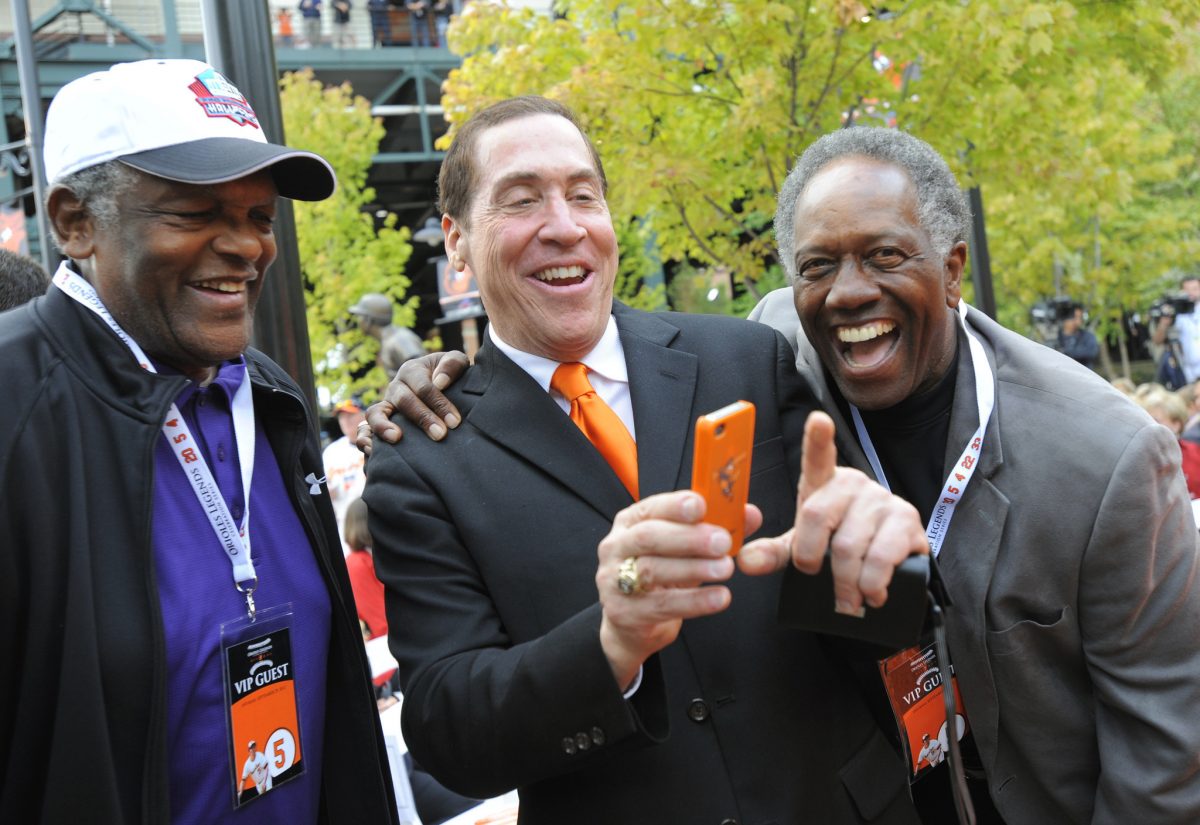 Roy Firestone with former Colt great Lenny Moore to his right and ex-Oriole, the late Paul Blair to his left at an unveiling of a statue for Brooks Robinson

The unsettling comments of Don Cherry took its toll. He was yanked off Hockey Night in Canada, the hallowed telecasts of the country’s sacred sport. If John Madden was football in the United States, Cherry is hockey and more in Canada.

The 85-year-old had served as the show’s central character for some 38 seasons. But years of scornful rants turned into Cherry’s on-air death by a thousand cuts.

The last of his contemptuous spews targeted Canadian immigrants. It did him in. The gaudy attired television cynosure claims that they don’t show sufficient patriotism for his mother country.

Immigrants don’t wear badges on their coats to identify themselves on Canadian streets. But Cherry’s convinced they did not affix traditional poppies on their lapels in advance of Remembrance Day, the nation’s version of America’s Veterans Day.

This wasn’t his first eye-popping comment. Let’s go back a bit.

He dug himself into a deep hole on the recent attack of immigrants. “You people, you love our way of life, you love our milk and honey, the least you could pay [is] a couple of bucks for a poppy or something like that,” Cherry said during the segment.

A firestorm erupted on social media calling for Cherry’s firing and the NHL also condemned his comments. Cherry didn’t apologize. He claimed that had he apologized; it would have saved his job. He never did.

You can’t get to hockey in Canada without going through Don Cherry and as one commentator said: “It wasn’t a one-off transgression. It was a pattern.”

Staffers at Hockey Night in Canada told reporters that you just didn’t question what Cherry would say. It was a no-no.

Steve Simmons wrote in the Toronto Sun “Like him, hate him, believe in him, be disgusted by him, the one thing we never did was ignore Don Cherry. We always listened.”

I talked with Roy Firestone, sports interviewer nonpareil and former ESPN personality who often shares stirring takes on athletes and issues, off and on the playing surface. He’s interviewed thousands of sports figures, from faces that are famous to the powerful who pull the strings behind the scenes. Not just snippets or soundbites, Firestone has had them for half-hour and hour-long sit-downs.

Firestone’s Up Close was an ESPN staple when the network launched in the 80s. During those embryonic years, the Bristol hopefuls functioned on a shoestring. Strapped for cash, the joke was that it had nothing but Australian rules football.

Roy’s long-form nightly interviews with sports’ who’s who, filled a needed primetime hole in ESPN’s nascent decade. It gave the network an identity of sorts. The show was novel. The then dominant over-the-air networks wouldn’t touch anything like it. The program drew millions of needed eyeballs and gave the fledgling Bristolites a presence.

Roy and I talked about the Cherry incident, political correctness, the ESPN edict not to raise politics and more.

Is there one word that defines the entire Don Cherry episode?

Let me first make it perfectly clear. I don’t in any way defend what Cherry said. But the entire development wreaks of hypocrisy and double standards.

Cherry’s career was fraught with outrageous comments. It goes back decades. In 1999 when Alpo Suhonen a Finnish coach was brought over to Moncton, New Brunswick to head a minor league team, Cherry went off, ‘Wasn’t a Canadian good enough? … I don’t wish him well in Moncton. What’s his name, Alpo? Sounds like dog food to me.’

Yes, he was hired as a colorful ex-coach. Yet, he turned into a star, a character who viewers tuned in to see.

As Cherry’s popularity swelled over the decades, his pattern for controversial comments was overlooked and then he was fired after this last spew about Canadian immigrants. I am not in any way, in any way, embracing what he said.

I simply want to underscore the hypocrisy. He was on-air because his controversial comments drew audiences. He had carte-blanche, continued to do what he had done for years and was suddenly fired for it. His past comments were equally as incendiary. And this time they blew the whistle on him.

How do you characterize incendiary comments?

I would use the word intent. There are comments that are silly and insensitive. For example, in 1983, Howard Cosell called the Redskins’ Alvin Garrett a little monkey. (“That little monkey really gets loose. Doesn’t he?”) It was stupid and insensitive but Howard didn’t have any malicious intent. People are flawed. They make errors of judgment.

Cosell survived the backlash. I’m not sure he would today, not the way demeaning tweets and such erupt on social media. It’s unfair that people should lose their livelihood over a one-time lack of judgment.

Fuzzy Zoeller’s comment some twenty years ago about collared greens in the club house is another example of human frailty. He meant nothing hateful. It was a failed effort at humor. It cost him tons. He lost endorsements and had to fight off negative labels for years.

Jimmy the Greek might have been drunk when he made his ridiculous, disparaging stereotype assessments of African-Americans. They were not premeditated.

We’re so quick to hit the red button today and kill careers instead of letting things roll off our backs at times.

Then there’s Curt Schilling who tweeted comments comparing Muslims to Nazis or voicing his approval in graphic terms for North Carolina’s law barring transgender people from using bathrooms. That’s an example of intent. ESPN fired him.

Any other examples of hypocrisy?

Again, let me make it perfectly clear. I applaud what both ESPN’s Jamel Hill and Dan Le Batard said. But a few critical things here.

All those years when Up Close was appointment viewing and you recorded thousands of interviews, you would at times do commentaries whether on gender equality or Rodney King and the Los Angeles police. How did ESPN respond then?

Management didn’t say a thing. But it was well before social media.

I interviewed OJ Simpson in 1989, years before the murder of Nicole and Ronald Goldman. There was an alleged incident at the time of domestic violence. So I asked OJ about it. He denied it vehemently and we moved on.

Flash forward to ESPN’s OJ: Made in America. A snippet of the interview ran on the documentary and I was held up to ridicule. I was being accused of letting him off the hook and more.

The response on social media was disgraceful if not frightening. Thousands called me an enabler. One particularly nasty missive was, “I hope you have two daughters and they’re raped and murdered.”

The weight of social media is overpowering.

China and the NBA. Thoughts? 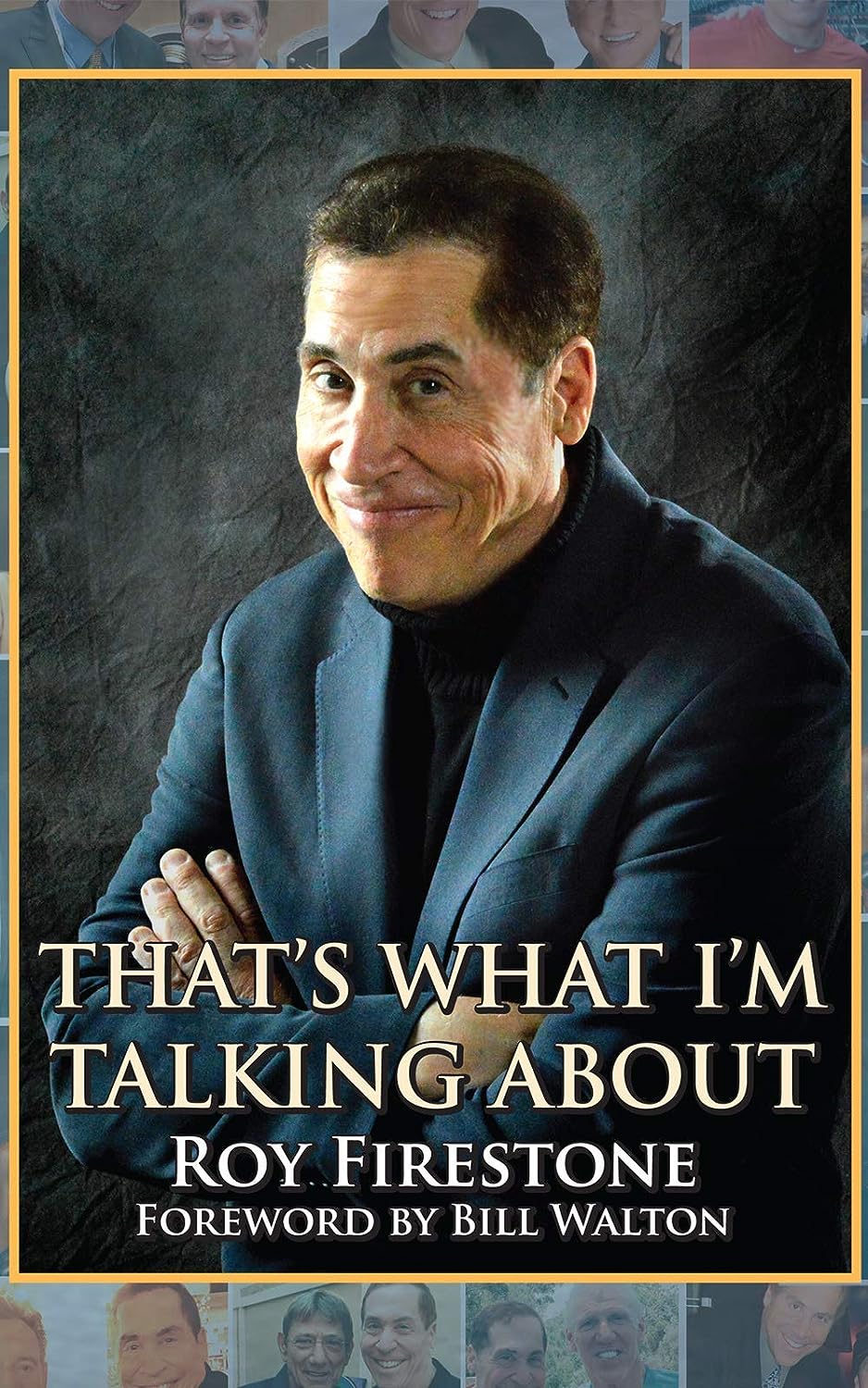 Charles Barkley, who by the estimates of many, is sports broadcasting’s most outspoken personality, was critical of Daryl Morey, the Houston general manger whose comments triggered the firestorm. I was surprised to hear that from Charles.

Then again, there are billions of dollars at stake. And Charles has financial interests too. So, it’s an example of the intersection of commerce and ethics. When you worry about your own money, it’s a whole other animal. I don’t imagine that Morey anticipated the blowback he got, particularly from LeBron James.

In my life, I didn’t imagine that standing up for democracy in America would be a point of contention.

Roy Firestone, I MISS you. His interviews were terrific, and he got people to open up in ways they normally wouldn’t. I’ve always remembered him getting Vin, who historically tried to avoid controversy, to comment when Deion Sanders said he played two sports for the money and would play only one if they paid him enough, and Vin replied that we hear a lot about rights but not enough about obligations–that he had the right to say that but an obligation not to. I still think that is brilliant. Another thing that emerges from this interview with Mr. Firestone is… Read more »

I think Roy’s interviews help lay the groundwork for ESPN to realize that Outside the Lines, 30 for 30’s and others of those ilk would be successful. I really wish he still did his interviews even if just a short series of them each year. They would be popular. And I hope that when he quoted Howard Cosell that he did it in Howard’s voice.