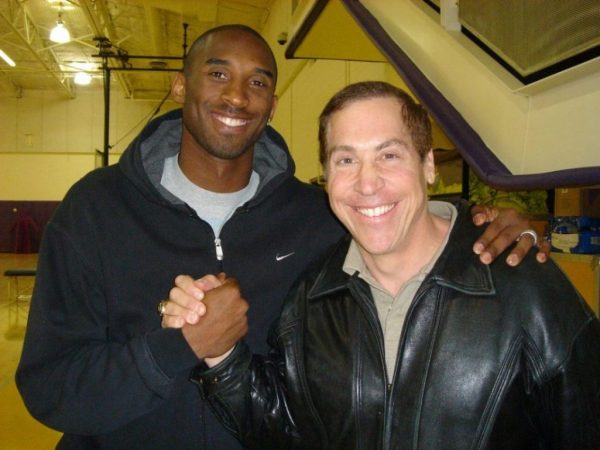 Firestone: When you see a guest show his or her soul, it’s the ultimate viral issue.

Roy Firestone, 64, developed into a household name on ESPN in the 1980s.

Roy Firestone, ESPN pioneer and prolific interviewer, writes from the heart about Kobe and what he meant

As a young sports fan, Roy had an irrepressible craving to delve into the lives of popular personalities; hoping to learn what makes them tick. He achieved his dream through a marathon career; interviewing thousands of who’s who in sports.  But Roy had little interest in peppering subjects with confrontational questions. He preferred to paint the human side of a subject; not to produce a cheap news-making soundbite.

Roy cut his television teeth in Miami where he was reared. In the late 1970s, he moved to Southern California where he anchored sports reports for the local news. His ESPN show, first Sports Look and later Up Close, generally ran thirty minutes. His guests were almost everyone imaginable, from Howard Cosell, Vin Scully and Magic Johnson to Muhammad Ali. Name sports stars and they were likely on one of Roy’s many long form shows.

Firestone’s interviews drew occasional criticism and ire, including one with O.J. Simpson when domestic abuse charges against the Hall of Famer were surfacing.  Another one was with Bob Knight after the coach’s infamous choke-hold on the Hoosiers’ Neil Reed. While Firestone acknowledges missteps for some exchanges with both Simpson and Knight, he’ll point out that he did pose a dozen or so probing questions of the ex Indiana coach. As for Simpson, Firestone points out that his interview with O.J. took place some four years before the murder of his wife Nicole Simpson and her friend, Ronald Goldman.

Yet Roy will also tell you that he respected interviewees’ bounds and would not ambush them. He makes it clear that he does not believe in trapping subjects to expose something gaudy or eye-popping. Perhaps it’s an approach not popular today in a digital world of Deadspin and TMZ.

Roy wants to be remembered as fair, insightful, humorous and poignant. His great strength on the set was his flair for the dramatic. It was often good theater. He was more interested in fashioning enlightening profiles, taking his viewers into guests’ hearts and souls.

Firestone admittedly says that through the years he didn’t consider himself a journalist, rather a communicator; one who relies on his feel and the rapport that he develops with his subject.

Before proceeding to the second half of this Q&A with the award winning interviewer, you might want to go through the first segment, Early ESPN interviewing icon, Roy Firestone: Opinions today are the cheapest form of programming

Why did you leave ESPN in the mid 90s?

Let me say this. I was as good at the end of my run as I was throughout my long stretch at ESPN. Frankly, I was situated here in California and ESPN’s Bristol management didn’t know me as well personally as those in its home base. ESPN wanted to save money; pay me less than expected and  to commute to a set in Connecticut.  That said, I’m grateful to ESPN for the fun and productive years we mutually enjoyed and I left the network amicably.

At some point, I was asked to work on SportsCentury: Top 50 American Athletes of the 20th Century. But it didn’t involve interviewing any of these greats. For instance, if the focus was Ted Williams, the format would have others who knew Ted talk about him. The concept didn’t appeal to me. Eventually it went to Chris Fowler. Also, Fox appeared to have interest in me but nothing materialized.

When you left ESPN in the 90s, did you try to reestablish the show elsewhere?

Absolutely. I still try. I strongly believe that there’s a place for long form sports interviews.

What frustrates you about TV interviews today?

It’s a vast wasteland. Two people on the set with opposing views sit and argue. There might be an attractive woman who serves as a third party. She says relatively nothing other than acting like a line judge. The subjects remain the same, over and over. Opinions and differences matter more than the interview. It’s not my style. I don’t get outraged over the offensive line of the Cincinnati Bengals and won’t take twenty minutes to rant about it. I’m more interested in humanity. I still strongly believe there’s an audience for it.

The work of Ellen DeGeneres and Oprah Winfrey. Viewers remember their interviews. When you see a guest show his or her soul, it’s the ultimate viral issue. People might say that Roy’s the guy who got people to cry. Nonsense. Less than 25 of the guests on the 5,000 interviews I did welled up. What it does say though is that people remember tears. They remember the emotion. More importantly, they generally won’t forget something that surprised them or moved them.

If you were to be complimented as an interviewer by colleague comparisons or equivalents, whose names would please you?

I would rather be identified with Oprah Winfrey than anyone other than Bob Costas. Ted Koppel and Bob are two of my favorites. Phil Donohue is another who’s terrific.

He’s been a friend and someone I’ve admired for forty years. I was with him when he received the Ford Frick Award at the Baseball Hall of Fame last summer. I can’t be more effusive in my praise. He makes me proud to be in the business.

It’s more intellectual and subdued; much less emotional and more analytical. He uses each word wisely. He’s a wordsmith. If people think he’s talking down to them, he’s not. His language and cadence are who he is. I am in awe of him. Bob’s a precisionist, he wants to articulate questions and frame them perfectly. And he does.

I wasn’t a precisionist. I was two-fisted. I was driven more by emotion to connect to the human core. That said, Bob’s famous interview with Mickey Mantle was very emotional. Bob Costas is an interviewer’s interviewer.

Inside the Actors Studio on Bravo. James Lipton who’s hosted it for some 25 years is retiring. What’s required of his successor are passion, curiosity and a desire to tell a story. Those three qualities define my ethic in going about my business.

His questions are freakin’ longwinded. Example: “There’s a perception of you” or “There are those who suggest…” Just get to the question.

I believe that the shorter the question, the better the answer. The shortest question is one word, ‘Why?’ It’s the ultimate question no matter what someone says, you can always follow up with, ‘Why?’

You mentioned Donohue. Any others?

Rachel Maddow and Brian Williams (MSNBC) are real good. They don’t do long form. It’s usually five minutes which is a different animal.

Not being involved on TV regularly anymore, how do you feel?

I’m disappointed that I couldn’t continue. I wish I could have. Yet I love what I do today with corporations and the like. I’ve had a great career and great life, I’m not complaining. When I’m asked why I’m not doing it, it’s hard for me to fill people’s mild disappointment. I can’t answer why I’m not doing it.  I’m easy to work with, I’m a team player. I’m not a prima-donna. I did 13 shows of LA Tonight for the PBS affiliate here in Los Angeles that’s now on hiatus.

Who have you interviewed outside sports?

I’ve had comedians, singers, actors and artists. I’ve had Seinfeld, Tom Hanks, Madonna and Jerry Lewis, plus many others. Often there’s a sports hook to these interviews.

I had Vin Scully on a couple times. I wasn’t afraid to ask arguably the best baseball announcer ever, tough questions. I brought up critics of his work. Is he too flowery? I had Harry Caray and Ernie Harwell and I had the Bucks. I had Joe when he was a teenager. He can be snarky and sarcastic. Dad, Jack, was royal and biblical.

Anybody mean something special to you when you broke into the business?

Quite a few. At the top of  the list are Tony Segreto and Bernie Rosen at WTVJ in Miami. They  taught me the ropes when I was young. Bernie was WTVJ’s producer. He was there for something like 60 years. I still talk with him every day. Tony, a South Florida legend, had a huge impact on me. Tony was great on both sports and news . I would go out on an assignment and leave the camera on the hood of my car and drive off. They put up with me. I consider them mentors.

How about your affinity for the Orioles?

I fell in love with the team when I was 15. They trained in Miami where I grew up and I served as their bat boy then.

One of the great honors in my life was to introduce Brooks Robinson when his statue was unveiled at Camden Yard. He’s 82 and I consider him a good friend.

When I was a teen, I dragged a reel to reel audio recorder to training camp and secured an interview with Brooks. I was thrilled. When I got home, I noticed that the interview never recorded. To show you what kind of guy Brooks is, I went back the next day and told him what happened. I asked whether we can record it again. He jovially said yes and we redid it.

Roy is completing his third book which will be released in February, That’s what I’m talkin about

For more on Roy’s activities, see this YouTube video