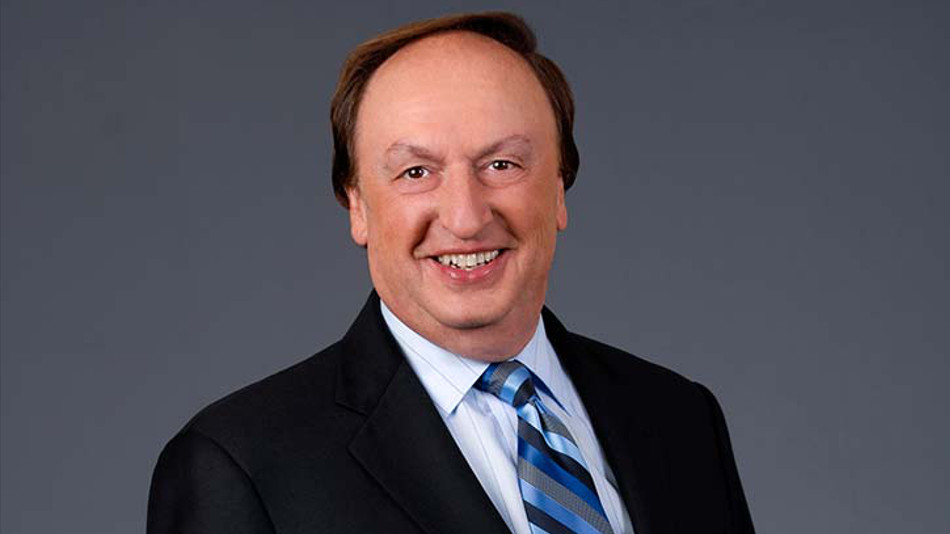 Sam Rosen is one of the good guys in the business. Early in his career in 1971, he sat in the auxiliary press box at Madison Square Garden earning a pittance for keeping stats for the Knicks’ radio crew.

Prominence and success notwithstanding, he has little ego, works tirelessly and his work day seems to get ahead of him. With so many sports voices that they blur distinction, Sam’s  sound is identifiable. His is sonorous and scratchy.  “It’s a power play goal!,” an exultation that has resonated for decades with New York hockey fans.

Sam played baseball in his youth and always aspired to be an MLB broadcaster. His best opportunity was in 1989 when he was already the established Rangers’ television voice. His employer, MSG Network, then acquired the Yankees’ rights. So Sam asked network president Bob Gutkowski about the assignment. Bob looked Sam in the eye, told him that it’s harder to find excellent hockey announcers than good baseball broadcasters and urged him to remain in his Rangers role. Rosen did and it’s been a long and successful run of 34 years.

Since 1997, Sam’s also been a mainstay with Fox on NFL telecasts.

I had an opportunity to bounce some questions off Sam recently. We covered some of the many personalities with whom he’s interacted and those who influenced him.

John Tortorella is a man with different personalities. He can be thoroughly engaging, interesting, intelligent and very caring. At times, he can also be distant, intimidating and not pleasant. I have known John since he was an assistant coach in Buffalo. In 2004, an hour after John and the Tampa Bay Lightning won the Stanley Cup, we sat in his office along with his brother, relishing the accomplishment. But there were also times during his Rangers’ tenure when he made me feel like an adversary who wasn’t on his side and didn’t want him to do well. Interestingly, I’ve found him much more approachable as an opposing coach. I will always remember that when my mother passed away in 2006, he sent flowers and a note. He is a man of different personalities.

You loved baseball as a New York kid, played the sport at Stuyvesant High School and at CUNY’s City College. How did you end up identified with hockey?

Growing up, I enjoyed all sports -major ones and others too- like track and field’s Millrose Games at Madison Square Garden. It made me versatile enough to undertake a variety of opportunities when they surfaced. At MSG, I first filled in covering the Knicks on radio. When MSG asked whether I can do hockey, I said yes and filled in for Marv Albert on Rangers radio. Later, I subbed for Jim Gordon on Rangers TV before getting the fulltime gig in 1984.  When ESPN went on the air in 1979, I was its first hockey play-by-play man. Then other TV networks assigned me hockey. It added up and it’s why I am strongly identified with hockey.

You grew up in a citadel of broadcasting, where the airwaves were filled with icons like Mel Allen, Marty Glickman and others. Who influenced your style?

Although I grew up in Brooklyn, I was and still am a devout Yankee fan. There was nothing like listening to Mel Allen on radio or television. His on-air energy and excitement had a great influence on my work. “It is going, going, gone!” or “How about that!” were special. Marv Albert’s ability to describe basketball and hockey was the best. His mentor, Marty Glickman, was the same way on football. Listeners on Giants’ broadcasts always knew everything about a play, the direction of a run or pass, the speed of the ball carrier, who made the tackle and where the ball was. Mel and Marty had great impact on my radio work.

Whose hockey broadcasts did you enjoy listening to in New York while you were growing up?

Until the mid 1960s, there was not lots of hockey on New York radio or television.

Most seasons, just a smattering of games was covered. Jim Gordon or Win Elliot did the play by play. There was a time too (mid 60s) when only the third period of select games was on and Marv Albert did them. Jim Gordon who preceded me on television had great professionalism, knowledge, intelligence and preparation. Those qualities were impressive and always stuck with me.

What were some of the early hockey games you remember attending?

I remember taking the subway to the old Garden (on 50th Street and 8th Avenue). When the doors opened, I ran up the steep steps to the balcony to get a seat in the first two rows. They had unobstructed views. I remember watching some great players, Andy Bathgate, Camille Henry, Harry Howell and Gump Worsley. The Rangers may not have had great teams, but they were lovable.

You’ve been the Voice of the Rangers for 34 years. By my count, there have been 18 separate coaches in the same span. Why is there such a frequent turnover of hockey coaches?

I don’t think the turnover of coaches is significantly greater than other sports. It has to do with success. In the Rangers case they’ve won only one Stanley Cup in 78 years, so there’s less patience. Ownership, past and present, wants to find that winning formula. The Rangers have had some excellent coaches in my years including Herb Brooks, Michel Bergeron, Roger Neilson, Mike Keenan, John Muckler, Tom Renney, John Tortorella and Alain Vigneault. Not winning the big prize has a great deal to do with the length of their tenures.

You’ve also been associated with Fox’ coverage of the NFL for 21 years. You’ve had many different partners for color commentary. Any stand out?

I’ve had an outstanding collection of analysts that have run the gamut; defensive linemen, linebackers, safeties, quarterbacks, a running back, coaches and a couple of general managers. I had one year with Jerry Glanville, which was very enjoyable because of his excellent knowledge of the game and at times, his hilarious personality. My five years with Tim Ryan, a defensive lineman with the Chicago Bears and currently the SF 49ers radio analyst, were outstanding. He’s a student of the game and an excellent broadcaster. But I can honestly say I’ve learned from all of them.

How much more preparation is required for football than for hockey?

The approach is the same but the requirements differ. With football it is THE game each week. It requires knowing how the team is doing, the players, the important storylines and statistics. It’s important to watch at least two games of each team, go to practices and do interviews with top players and coaches. There’s also a production meeting to review graphics and video. It’s an extensive week of preparation.

Because there are more games, the NHL is a quicker version of football prep, but along similar lines. Watch practice, see what your team is working on, what the line combinations are like and talk with players and coaches. For opposing teams, I watch their most recent games.

You’re comfortable on both radio and television. You’ve done the Stanley Cup for the NHL Radio Network and filled in on Giants’ radio too. Which medium do you enjoy more?

Simply put, I just love doing games on either medium. Radio gives announcers the freedom and responsibility to describe the game in a way that the listener has a real good feel for what’s going on while leaving the analyst enough time to provide color, Television is a team endeavor, with many people contributing to the production. The goal is always to entertain and inform; to make the telecast a “Good Watch!” There’s lots to get in; sponsor tags, network and team promos. These requirements take time away from providing information or weaving in an interesting story.

You have enormous energy but you recently turned 70. Is retirement in your consciousness?

I truly don’t think about numbers when it comes to age. Thankfully, I feel great, I still LOVE what I’m doing and always look forward to the next game. I very much enjoy my interaction with the players. The NHL players are young and from all over the world. The NFL players come from every part of this country and their stories are often amazing. So, to answer your question, retirement is not in my consciousness or on my radar.

Congrats to Sam for an amazing career that keeps going stronger than ever. Proud of his background as a student-athlete at CCNY and hope to pass his hard work and wisdom to today’s CUNY students.

Regarding Sam’s recollection of hockey on radio in the mid-60s, I was a huge Rangers fan, attending virtually all Sunday night games at the old Garden ($1.50 for a side balcony ticket using your GO card ). WHN 1050 had the radio rights then with Marv Albert on play-by-play. I remember Sundays in particular. The station apparently was not fully committed to the sport and so they decided to bifurcate by broadcasting a pre-game show at 7:05 PM when the game had actually already started and then would sign-off and come on again for the “last six minutes” of the… Read more »

Yes, Sam’s a good announcer. A damn good one.
But that’s only half of why he’s been successful.
He’s just as good a person.