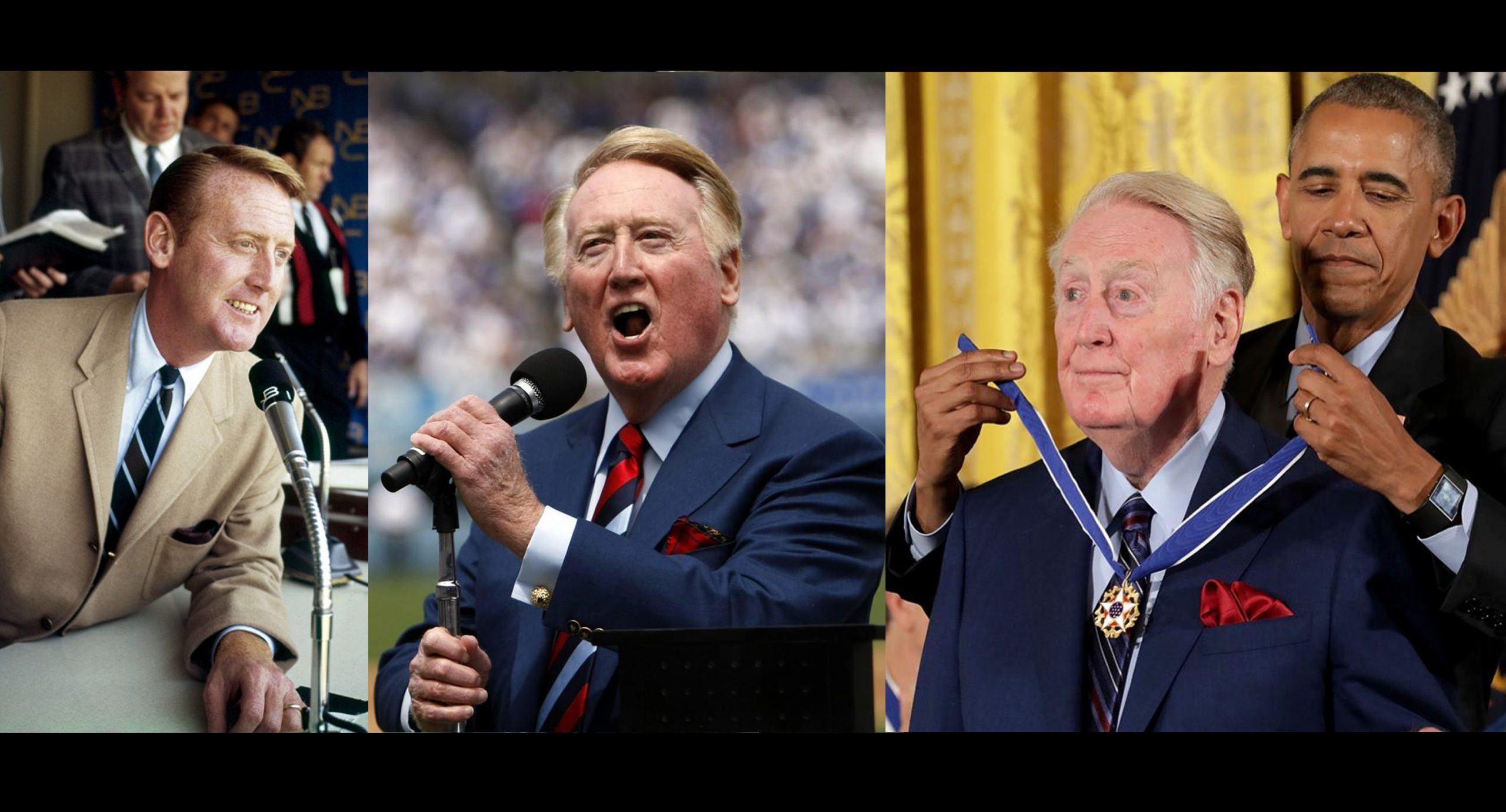 Vin Scully in the booth, addressing fans at Dodger Stadium and receiving the Medal of Freedom from President Barack Obama

In this segment of our continuing discussion with prolific author, presidential speechwriter and baseball broadcast historian Curt Smith, we focus on Vin Scully. Curt and I also cover baseball on radio. Is it sill magical? The indefatigable Smith recently released his latest title, The Presidents and the Pastime (University of Nebraska Press).  In the months ahead, we’ll have more with Curt.

You have written extensively about Vin Scully, including a popular biography, Pull up a Chair, The Vin Scully Story. So the ultimate question: Will there ever be another Vin?

Winston Churchill said, “I am always ready to learn, though I do not always enjoy being taught.” We’re taught never to say never, but I don’t expect to see or hear another Vin. A combination of factors made Scully, Scully.

His genius behind a mic brought joy from 1950 to 2016—never changing as America did, from before the wonder of I Love Lucy to the dread of a non-driver car. In 1955, the Bums of Flatbush won their sole world title, Scully, at 27, saying, “Ladies and gentlemen, the Brooklyn Dodgers are the champions of the world.” All winter, people asked how he could stay so calm. “If I’d said another word,” Vin replied, “I’d have broken down and cried.”

He ferried the Dodgers through their trek to California, helped radio-toting fans at the huge Coliseum hear what they couldn’t see, later elevated NBC’s “Game of the Week,” and always elevated the game. “Flip on the car radio, and you can almost hear him riding shotgun,” a writer said, “swapping stories.” Invariably, we wanted more.

Each of us has a Scullyism(s). I recall “If I were brought back, I’d like to come back as Cary Grant, dancing like Gene Kelly, and singing like Bing Crosby”; “twilight’s little footsteps of sunshine”; and “he catches the ball gingerly, like a baby chick falling from a tree.” His peak among pinnacles may have been Kirk Gibson’s homer in the 1988 Fall Classic: “In a year that has been so improbable, the impossible has happened”—or was it Mookie Wilson’s 1986 “little roller up along first … behind the bag … It gets through Buckner! Here comes Knight! And the Mets win it!”—and ultimately the World Series?

Only Vin could inspire the 2017 Series by throwing out a first ball! He is also a patriot, testimony to The Greatest Generation, having served in the Navy. God willing, “There will always be an England,” but how can there ever be another Scully?

The world has changed. Vin Scully told me that it pains him to watch his own World Series television work of the early 1950s. Broadcasters then, he said, were very sensitive to criticism in the press that TV announcers talked too much. In fact, if you listen to Scully, Barber, and Allen in particular, they worked their assigned innings alone, easily mistaken for public address announcers. They talk so little. And this of course was before replay. Today’s broadcasters are loquacious. Is there a happy medium?

As television began to supplant radio in the late 1940s and early ’50s, Voices got the willies. Radio was a sonata; nothing happened until an announcer spoke. TV was still life, deadened by statistic. Some made the transition between them more easily than others. Mel Allen, Red Barber, and Scully worked in New York, where a bevy of newspapers had a disproportionate effect. Raised on radio, their media critics’ advice to announcers incorrectly was to say little on TV.

Allen was especially scored for talking too much. “Opinion to the contrary,” he said, “during a baseball game the camera doesn’t give the viewer a complete picture of the game.” That meant giving the score, promptly and repeatedly, and the game’s strategy—why a power club might suffer against junk relievers, as example, or an outfielder play a hitter to the opposite field. In the regular season, Mel said only marginally less on TV than radio. Younger, Scully learned in the early 1950s from his mentor, Barber: report, don’t intrude, say much less on the tube.

World Series TV coverage differed: all Voices said little, the Classic such a coast-to-coast Holy Week that it deserved to be treated solemnly, spartanly, as if Yankee Stadium really was a cathedral. In 2009, MLB Network debuted by reshowing Don Larsen’s 1956 Perfect Game, which Vin aired with Mel on NBC TV. Watching, Scully was struck by the minimalism: “’ball one, strike on.’ We were always told to be quiet [by sponsors, critics, and teams: Baseball was deemed a grail, needing little elaboration]. We were somewhat intimidated by talk.”

NBC used just four cameras: two behind the plate and one on each line. Ironically, with instant replay, glitzy graphic, center-field and fan-reaction coverage not yet available—“how primitive TV baseball was!” said Scully—it might have helped the broadcast to use a fuller radio approach, filling air time to clothe balls and strikes. Few complained, given the script, site, and Voices. Only now does it seem strange.

One happy medium, I think, was 1950s April-September Allen. Another: regular season’s Vin, especially after Barber left Brooklyn for Yankee Stadium in late 1953. Others include Curt Gowdy, Jon Miller, and Gary Cohen, doing each medium at one time or another. All spoke then or now only slightly less on TV than radio—showing that while football and basketball carry the announcer, the announcer carries baseball.

Is there still a magic today about baseball on radio?

Magic exists, but in fewer places, and for fewer people. I was lucky by time and place of youth—late 1950s and ’60s Upstate New York—hearing 75 percent of any night’s big-league schedule, from Boston to St. Louis. On radio, the parks suggested a seeming wonder—Comiskey Park’s yawning alleys; Death Valley at The Stadium; an in-play cage at Forbes Field—not alien to a boy from any small town. The Voices of The Game hosted, announcers extended members of the family, so personal as to be instantly recognizable—The Voice and Red and Scooter and Cowboy and Ned and Ernie and Lindsey and Murph and Gunner and Possum and Earl and Jimmy and By and Chuck and Waite and “Holy Cow!” and Jack and Joe G. and Vince and “Hey-Hey!” and The Old Commander and if I’ve missed anyone’s name or moniker, my bad.

Scully was too far away to hear: I caught up later. Weekend network TV meant Bob Wolff and Dizzy Dean. Today I follow baseball on the wireless less at home than in the car, my children and their friends using it less. Worse, the pastime misreads its core, saying that since football is a media analyst’s game baseball must be, too. Wrong. On radio and TV, one pitch mimes another. Fastball, curveball, slider-curve—watching or listening, how many, especially kids, care?

Analytics, scanalytics, how can baseball lure 10-year-olds by dissecting a pitching science a light-year from their lives!? Instead, make ’em laugh, cry, feel anything about the game! “It’s conversation. It’s quirky,” said Bob Costas. “That guy at the end of the dugout. Is he a character? Did he dream of being a big-leaguer? How did he get here? It’s a story-teller’s game.”

This is especially true on radio, a listener picturing bags, positions, batter and pitcher. A man hits to left-center field. “Mentally,” Ernie Harwell told me, “you see it all at once—runners, fielder chasing, shortstop with the relay, catcher bracing.” A great Voice—mostly play-by-play; some color—had or has a compelling persona—roughhewn, comedic, soaring, no matter: what counts is that it works. “It’s packaged for the mind,” Ernie said—also tongue.

Hurting baseball is that Voices are often warned by teams and sponsors not to be like the personalities named above—ebullient, controversial, often loved or hated, but followed. Be vanilla, they say: Don’t offend. Again, wrong! Before baseball can sell itself, it must grasp what it has to sell.