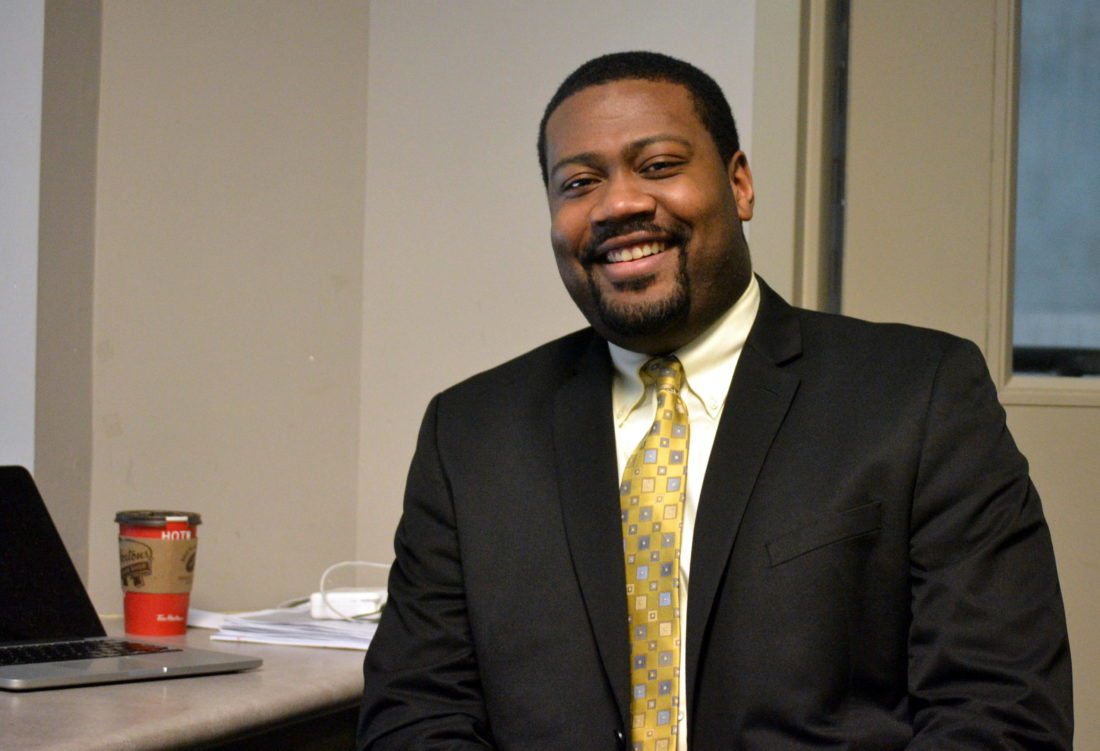 A couple years ago, not long after this publication was launched, my longtime college buddy Andy Furman told me about Everett Fitzhugh, hockey’s only Black professional sports announcer. He was 29 at the time and the Voice of the Cincinnati Cyclones of the ECHL. When I spoke with Futzhugh then, he told me that he hoped to be in the NHL by 40.

Furman is an absolute institution in Cincinnati, an on-air personality since the 80s. He’s currently with Fox Sports Radio and has a good ear for play-by-play.

Well today, the new NHL franchise, the Seattle Kraken announced that Fitzhugh will be the club’s first broadcaster. The franchise will hit the ice in 2021 which means that Everett will be 32 when the puck drops.

There’s something very special about beginning with a franchise at the outset. Announcers can last forever and be indelibly linked to the growth of club’s popularity. In the NBA, think Chick Hearn with the Lakers in Los Angeles and in recent NBA years, Eric Reid in Miami and David Steele in Orlando. Denny Matthews of the Kansas City Royals has been with the club since it was born in 1969.

The franchise made the announcement earlier today and an ecstatic Fitzhugh released this statement, “”As someone who’s worked in hockey for over a decade and who has a long-held passion for broadcast hockey, to be named team broadcaster for a brand-new NHL franchise — particularly one with an organization as strong as the Kraken — is a dream come true.”

He beat his own goal by eight years, not bad for the Detroit native.

As I understand it, Fitzhugh was the subject of a profile in The Athletic in February. Little did Fitzhugh know that one of the people who read that story was Kraken CEO Tod Leiweke, who had already heard about Fitzhugh from NBC’s Mike ‘Doc’ Emrick.

“I don’t know if Everett has heard that story, but he was definitely on people’s radar screens,” Leiweke said.

Leiweke sent Fitzhugh an email, which the announcer initially thought was spam. That’s the way dreams are born.

“The Kraken is striving to become a leader in sports when it comes to diversity and inclusion in hiring at all levels,” Leiweke said, adding that, “Fitzhugh has established himself as a unique and leading voice for hockey and was high on the list of many folks we consulted with.”

On Tuesday, September 18, 2018, Fitzhugh got a taste of the NHL working his first ever NHL broadcast, a Bruins-Caps pre-season game.

Here’s our conversation with Fitzhugh published in June, 2018.

You grew up in Detroit. What made you fall in love with hockey? Was it as a kid in Detroit or later while you were at Bowling Green?

I first fell in love with hockey in elementary school, around the third grade. I went to a predominantly white private school. Most of my classmates were really into hockey; many even played. I remember getting home one night and turning on a Red Wings game. They were playing the Edmonton Oilers, who had a pair of black players (Mike Grier and Georges Laraque). I immediately felt drawn to the game and the Oilers. A few years later when they added Anson Carter, I knew that hockey was for me.

Who were the play-by-play announcers you idolized growing up? Were there any hockey announcers in particular that you liked and now try to match?

My favorite broadcasters were former Tigers broadcaster Ernie Harwell and Stuart Scott of ESPN. Hockey-wise, I always loved Jim Hughson and Bob Cole of Hockey Night in Canada. From an analyst standpoint, my favorites are (the late) John Saunders and David Amber.

I don’t think I try to emulate anyone in particular, but sometimes I find myself taking a few thigs from different guys and trying to make them my own.

You went to Bowling Green. There’s lots of competition among student broadcasters to land play-by-play assignments at the student station. Did you apply to do other sports first and got hockey as an alternative opportunity or was it your first choice?

I pretty much fell into hockey by accident. I was in the Bowling Green Radio Sports Organization which was a student-run and led broadcasting group. Games were assigned based on seniority. As expected, everyone wanted to do basketball and football, so one day there was an open spot for a color analyst for hockey, so I volunteered. I immediately fell in love with broadcasting – and particularly hockey. Because there were only three of us who actually knew hockey and had an interest in it, I got lots of opportunities. I was primarily a color analyst my first three years, before assuming the role of play-by-play during my senior season.

Willie O’Ree, known as the ‘Jackie Robinson of ice hockey’ was a Canadian-American and the first black player in the NHL. He debuted with the Boston Bruins in 1958 but didn’t play much. O’Ree says that he was the target of racist remarks, particularly in American cities. Black players make up a very small fraction of NHL players. While there are more black players now in the NHL, what would it take to grow the NHL population of African-Americans?

The biggest factor that limits black people from playing hockey is simply not seeing many others who look like them. Hockey was and still is in many circles, considered a “rich white man’s game.” When I was small, I was really into basketball and baseball and didn’t give hockey a chance; even though I lived in “Hockeytown.”

Go into innercities now, and the sports of choice are basketball and football. Along the same lines, and at the risk of sounding too frank, I think that basketball and football are seen as easier sports to excel in. Hockey is a REALLY HARD and REALLY EXPENSIVE sport. For those from families with limited means, it’s easier and more cost-effective to play basketball on the playground and learn the game there; or play football at the local school field. It’s financially demanding; drive 30 miles, pay $200 for ice time, $20 to rent skates, and $50 to take ONE skating lesson.

Any history of African American announcers in the NHL or the hockey minors?

None that I know of. In fact, back in 2007-08, Mike Lockert, the former broadcaster for Notre Dame, and I 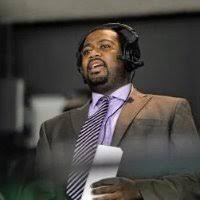 Have you felt uncomfortable because the NHL is primarily populated with white players?

It has never made me feel uncomfortable at all. In fact, it makes me work harder to help introduce hockey and educate all types of minorities on the sport. When I tell folks I work in hockey, I always get the eye-roll and scrunched face. Still, people are always interested. While I don’t consider myself as a “pioneer,” my goal is to ultimately get to the NHL and if I can inspire someone along the way it would be a huge plus.

Who are some of the current NHL announcers you enjoy listening to today?

I like to listen to a lot of different broadcasters when I have a chance. Some of my favorites are Jack Michaels of the Edmonton Oilers, along with Derek Wills of the Calgary Flames. Additionally, John Shorthouse of Vancouver and Dan Dunleavy of Buffalo are very enjoyable to listen to.

Have any broadcasters been of help to you along the way and helped counsel you?  If so, who?

I’ve been fortunate to have been able to pick the brain of Michaels in Edmonton, Dunleavy of Buffalo, and Washington’s John Walton. All three have provided me with tremendous advice on the occasions we talked and interacted.

You called the ECHL all-star game in Indianapolis this past season. The game was carried by the NHL Network. Longtime NHL exec Neil Smith was part of the broadcasts. Tell me about the honor. It had to be a special experience

The All-Star game is definitely in the top two or three highlights of my career. It was an extreme honor to be chosen for the broadcast and to work alongside Neil and Brian McCormack. It had been a while since I served in an analyst role, but it was a challenge I welcomed. As a play-by-play man, your job is “easy;” just tell people what is going on. Analysts have the tough job of breaking down plays and getting inside the heads of players and coaches. I really enjoyed being on that side for a change.

Is your dream to announce NHL games or do you want to do other sports too?

I always tell people that the dream is “NHL by 40.”  Ever since I started, I’ve had the desire and goal of calling games in the NHL. I’ve done basketball and baseball in the past and really enjoyed it. But at this stage of the game, I’ve kind of put all my eggs in the hockey basket, so to speak.

You’re also the Cyclones’ public relations director. You plate is full. Do you still have ample time to prepare for the broadcasts?

Oh, yes! You always find time to prepare. I just wrapped up my third year in Cincinnati and have one year with the USHL’s Youngstown Phantoms under my belt in the same capacity. In fact, in my current role, the actual broadcast is only 20% of my job. The PR, marketing, social media, etc. is the real focus on a daily basis. At this level, we have 72 games a season about an average of three or four games a week. Turnaround time is pretty fast. It also helps that roughly 45-50 games are against the teams in your division. So after four games against Indy or Ft. Wayne, you don’t have to do a ton of new prep work.