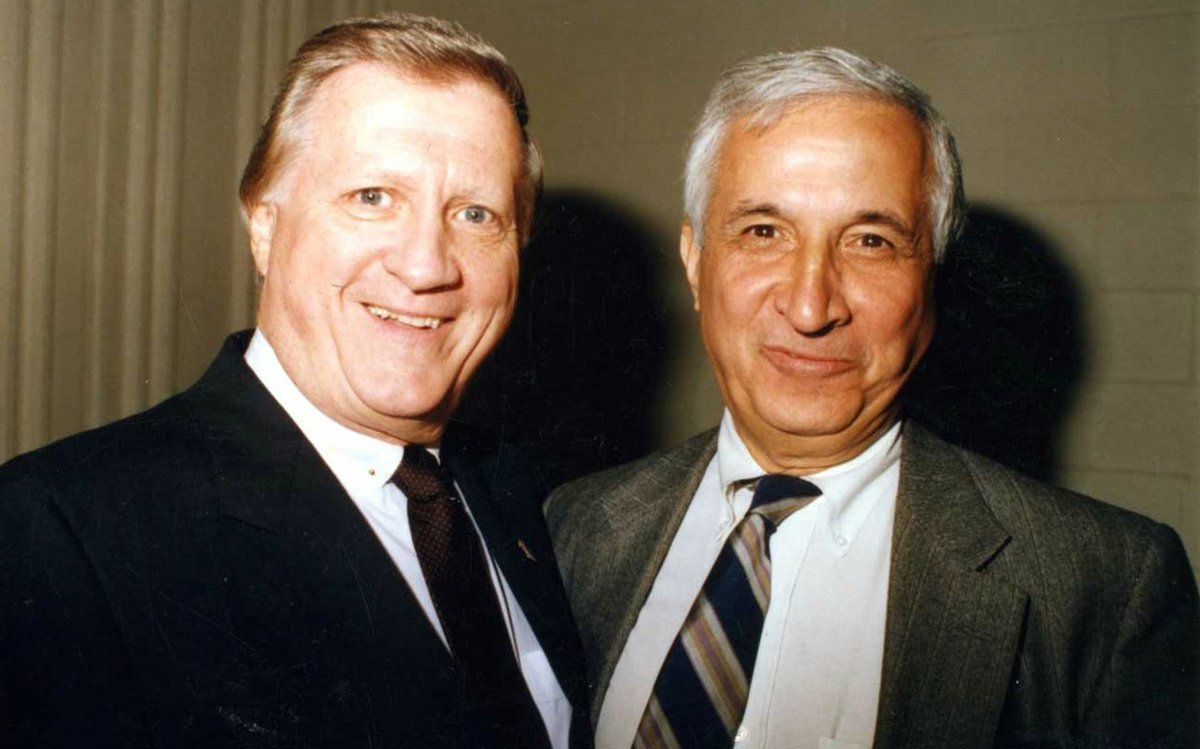 Sid Hartman (right) has seen just about everything. He knows so many of the present and knew so many of the past. Sid is photographed here with the late George Steinbrenner

Shortly after this article was posted, Sid Hartman passed after a full and productive life.

We continue to celebrate five media members who were born one hundred years ago. In the second of this series, we salute the only one still alive.

A native of Minneapolis, Sid Hartman wears the pride of the city on his sleeve. He doesn’t hear as well as he once did and he needs a walker to get around. Yet Sid is still going strong and remains determined every day to stay current. Father time has weakened him somewhat physically but with his memory and mind are sharp. He’s got a century of stories on all the colorful personalities who passed through town.

From Billy Martin’s managing days in the Twin Cities to the NBA’s Minneapolis Lakers 75 years ago and from the Vikings four Super Bowl appearances to the Twins first World Series in 1965, Hartman lived through them all. Bring up a subject and he’ll regale you with an anecdote.

Just this week, Hartman penned a piece in the Star Tribune in which he bemoaned yet another collapse by the Twins in post-season. You can feel the disappointment dripping from Hartman’s copy. He and Minnesota fans have seen this one before.

“Whatever momentum the Twins had after going 36-24 in the regular season didn’t carry over when they faced a mediocre Astros club. Instead their playoff losing streak extended to 18 games — the longest streak in MLB history,” Sid wrote. 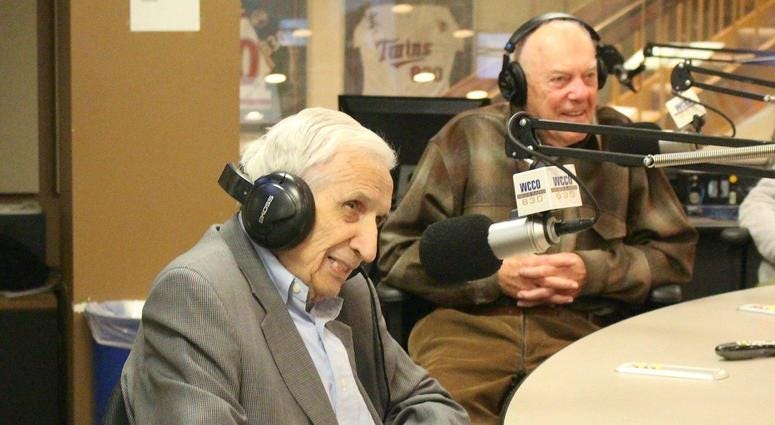 With age comes wisdom and Hartman (left) stamped the Twins setback with perspective. Who better? He’s witnessed emotional roller coasters during a century covering local sports in the Upper Midwest. So in the same column, Hartman maintained a sense of optimism, “Even though this playoff loss will be difficult to take, there is no question this club is in position to continue to contend and to try and not only break this playoff losing streak but make a push to win a World Series.”

It reminds me of the sage Red Barber, the Dodgers’ voice in Brooklyn. In the years following the war, baseball reigned supreme in New York. Subway Series were perennial events. The city was divided, Yankees, Giants and Dodgers. Every loss stung. In 1950, the Dodgers broke the hearts of all Brooklyn when they dropped the final game of the regular season to the Phillies who won the pennant and advanced to play the Yankees in the World Series. Dodgers fans were crestfallen. With typical calm Red assured his listeners that there would be another season and that before you know it, spring would be upon us.

Sid Hartman is as well known in Minneapolis as any native son, including an ex-mayor, Hubert Humphrey, a former United States vice president and Democratic candidate for president in 1968. For that matter, by now, Hartman might be better known. Born on the Ides of March the year in which Harding beat Cox, 1920, Hartman still contributes to a radio show all these years later. We should all be that lucky. For decades and decades, Sid’s been the go-to source for anything sports historical in the Twin Cities.

You might get answers that are somewhat tendentious, yet they’re always memorable. He helped run the Minneapolis Lakers before the team fled for greener and warmer pastures of Southern California. In his autobiography, he tells of the story how the Lakers came within a hair of getting Bill Russell the season before the Hall of Famer was in the college draft. And all these decades later, Sid says it was the fault of the team’s radio announcer Dick Enroth. According to Hartman, Enroth got the ear of owner Ben Burger and strongly suggested to him not to bet on a pick by trading star Vern Mikkelsen. Enroth insisted that Lakers’ fans loved Verne.

Hartman was with the club in those early years when the NBA was fledgling, playing in small towns like Syracuse and Rochester and trying to make payroll. Still, the Lakers won five titles in the NBA’s early years. They were coached by the legendary John Kundla who himself lived to 101.

In an eight decade career, Hartman witnessed the good and the bad, the near-riot at Williams Arena in 1972 when the Gophers’ Ron Behagen stomped on the head of Ohio State’s Luke Witte. It resulted in a black eye for Minnesota. He says that “SI wrote a cover story that did everything but proclaim Coach Bill Musselman the second coming of Mussolini.”

Hartman, who does commentary on radio, also experienced the racial violence this past summer that might have stained the city after the death of George Floyd.

He talks of the time he brought Howard Cosell to Minneapolis to give a speech for charity. Cosell gave the speech of his life after Hartman watched the network icon consume eight glasses of bourbon. Sid’s covered the best like Vikings’ coach Bud Grant whom he introduced for his induction into the Pro Football Hall of Fame. Grant took Minnesota to four Super bowls. But talk of disappointment, he didn’t win one.

Sid watched Billy Martin come to Minneapolis to manage the Twins in 1969. “He was about as flawed as any person but the people loved him. As popular as Bud Grant became, Martin might have been more popular.”

Covering the Big Ten, Hartman developed a relationship with Bob Knight. The three-time NCAA winner says of Hartman, “Any sports figure who has dealt with Sid looks on him as the epitome of honesty and accuracy.”

Is Sid current? He certainly works at it. Last year, just short of his 99th birthday, Sid and his care attendant got stuck for 80 minutes in an elevator car of the Star Tribune’s downtown building. It didn’t temper his enthusiasm to move on and stay active. He did and continues to do just that.

Does he know what’s coming up? You bet. Just last week, Hartman issued a look-out. He reminded his readers that the Gophers open the delayed Big Ten schedule against Michigan which is 75-25-3 all-time against Minnesota.

(In the second of a five part series, Sports Broadcast Journal continues to celebrate the lives of five prominent broadcasters born 100 years ago. We previously profiled Buddy Blattner whose fine early work nationally on baseball’s Game of the Week, earned him praise and visibility. Today. it’s Sid Hartman, the only one of the quintet still with us. Before turning the calendar to 2021, we’ll also get to write about Bill Mazer, Bob Ufer and Bob Wolff.)

I have the feeling somewhere there has to be a recording of him and Halsey Hall talking about the history of Minneapolis sports. And if there isn’t, I wish there was.