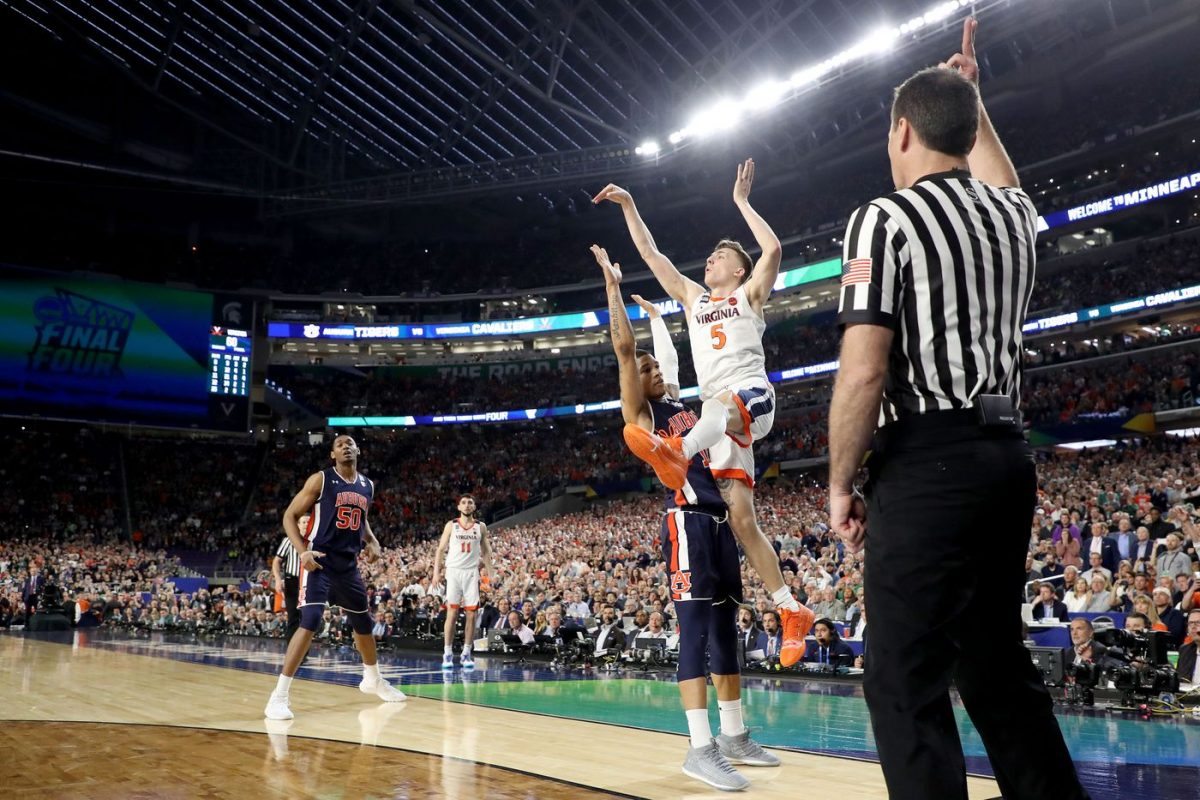 CBS and Turner have excelled.

Other than a misstep, omitting the Auburn celebration after its upset win over Kentucky and a mishap of an electrical outage in Anaheim, CBS and Turner have produced epic television. Game coverage has been exhaustively thorough. Nothing material, germane to any of the games, had been left for viewer assumption.

But last night, after the chaotic finish of the Virginia-Auburn semi-final game, I had this empty feeling of being uninformed. I wanted to know more. If the official who made the strikingly bold foul call on Auburn’s Samir Doughty was a culprit of sorts or a hero, I wanted to know something about him, starting with his name.

The call dramatically changed the result for both teams’ title aspirations and the repercussion of course was far reaching. It won’t easily be forgotten, not for scores of years and it will have a profound effect on thousands.

For many Seton Hall fans, the name John Clougherty lives in infamy. They still feel, “We wuz robbed.’ In the 1989 national title game, referee Clougherty called an apparent phantom foul on the Pirates in the waning moments of a tight finish. Two Michigan free throws by Rumeal Robinson did in The Hall, 80-79. Thirty years later, Clougherty is not forgotten.

These paramount calls sting.  Last night on CBS, the broadcasters were seemingly stunned when Doughty was charged with fouling Kyle Guy on a three point attempt in the final second. Virginia’s Guy missed the shot but proceeded to imperturbably hit all three free throws giving the Cavs a one point win and a spot in the national title game.

Announcers Jim Nantz and Bill Raftery were wowed for a moment when the whistle blew. Grant Hill usually the least free-flowing of the trio was the first to say something significant. “I think he (Doughty) might have bumped him low.” It was a perceptive observation, apparently before the benefit of a replay, which moments later confirmed Hill’s suspicion.

But who made the call, which of the three officials? I don’t remember hearing the name announced. Rules expert Gene Steratore clearly explained the rule immediately and the replay demonstrated that technically it was the right call. All good, but as asked by many later, was the same ‘low bump’ standard applied uniformly throughout the game?

Frankly, I don’t’ remember the official’s name being mentioned on-air at all, certainly not for a long time.

CBS owed the millions viewing, those who invested hours watching the contest, a little flesh on the skeleton, staring with his name and affiliation. The network research team had been spot-on with every record setting piece of numerical minutiae that was established throughout the entire tournament including the low scores of both games yesterday.

But why not something about the official beginning with his name? Is the network directed by the NCAA to present the men in striped shirts with distinguished anonymity?

Some simple bullet points on the fellow’s background would have filled the emptiness with which we were left yesterday. Instead, nothing. CBS should have a quick thumbnail sketch of all officials working March Madness for occasions such as last night.

Yesterday, some would say, the ref who called the Doughty fall had as much to do with the outcome as the players did. Even if he was right which he apparently was.

So here we go:

In addition, of course, there is also the glaring question of the missed double dribble, moments earlier on Virginia’s Ty Jerome. It happened with eye-blinking quickness but Final Four officials, the NCAA’s best, missed it. Steratore made mention of this blown non-call in the game telecast and was later on the set with the post-game crew. But no one on the set asked Steratore, nor did he offer to identify ,which of the three officials missed the double dribble call. Referees have assigned spaces to follow. It was never raised. It’s inexcusable.

Usually I’m on board with most of your opinions, but I believe you’re off base on this one. The officials, who should be anonymous by the nature of their jobs, got the call right. It was a foul. Auburn fans could complain about the double dribble not getting called seconds earlier, but officials don’t often get singled out for calls they don’t make.

As I recall, we always named the “fine (ECAC) officials” when we broadcast our college basketball games in the ’70s. We knew them by sight in most cases. Agree CBS should have reported the name.