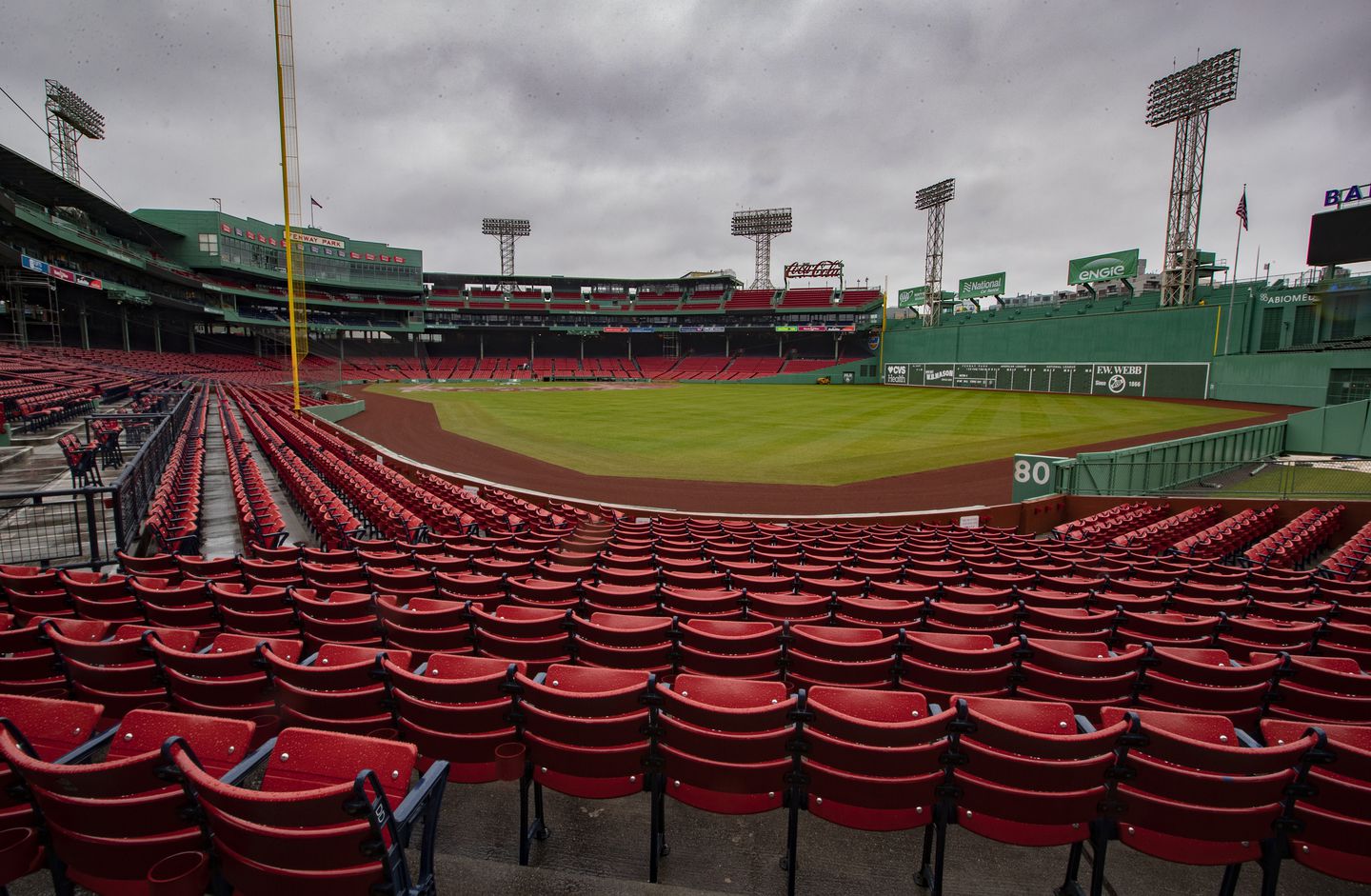 An empty Fenway Park, not what it's supposed to be in April

In part two, we’re happy to share a representation of American League announcers and how they’re spending their unwanted free time. In the next part, local voices chime in on what’s next when it comes to the baseball season.broadcast

Jan and I are still sheltered in Ft. Myers……biking, swimming, walking etc. and FaceTiming with kids and grandkids. My partner Will Flemming is nearby and we have done several podcasts at WEEI.com. Also done play-by-play of Jan and Will’s wife Jenn making eggplant rollatini used on WEEI morning show. Also doing Fantasy Tapes for radio clients (They hit homers to beat the Yankees!)

Pretty much what everyone else is doing, staying in the house and trying to be smart. Still do lots of reading and research so that if the season resumes, you are ready to hit the ground running. Reading books and streaming shows we never had time to watch when you’re raising four children. Based on the amount of zooming we are doing we certainly missed the boat.

I am working on a documentary for SportsTime Ohio (the regional sports network that airs Indians games) about the 1920 Indians World Championship team. It’s been a nice distraction to keep my mind off missing the first month of the season.

We are all living a nightmare, alternate reality. My family keeps busy and engaged by reading, watching TV, playing cards, walking, working out etc. We are blessed to be quarantined in a warm climate.

After 35 years of broadcasting Major League Baseball, I miss the game terribly. My wife and I have been respecting our state and city leaders’ requests to quarantine and social distance. This, unfortunately, has separated us from the people we love, our children, grandchildren, and friends…but…fortunately we have Zoom, Facetime, and the simple telephone to communicate our love.

We are also blessed with great neighbors who share in an occasional Social Distancing Happy Hour in the cul-de-sac at the end of our street (each couple ten feet apart). I have also taken up writing in recent years and, shockingly, have had success. My book/sequel, The Walls of Lucca, and Above the Walls, about two families trying to produce a great Sangiovese wine in Italy’s dark days of WW1, the rise of Fascism, and World War II. Both won gold medals for best of historical fiction in 2018 and 2019 by Reader Views and Readers’ Favorite in their Literary Awards competition. I am currently writing another book/sequel, entitled Walks with the Wind. This one will be about baseball and I hope to release it sometime in early 2021.

The unexpected time off has allowed me to focus on a number of things. One of the things I’ve focused on has been my health. This past November I underwent a Cardiac Ablation procedure in Miami (same procedure Kenley Jansen of the Dodgers has had twice). Being hospitalized for the first time in my adult life was life changing. My feeling is most people because of many reasons don’t think a lot about their health until they develop a heath issue. Since baseball’s shutdown, my wife and I have been walking 2+ miles every day and recently was told by my surgeon’s office (where I can be monitored remotely) I have had no heart related issues.

I’ve also appeared on radio shows and have tried to mentor several aspiring broadcasters who have reached out to me for career advice.

The only silver lining during this earth-shattering pandemic is the time I am spending with my family. In fact, my wife’s birthday was this past week and for the first time since we met (’08), I spent the entire day/evening with her. My kids are six and four and I’m soaking up all this time with them. Between baseball, college football & basketball, I simply haven’t been around, without traveling, until this health crisis. In terms of work, I’m incredibly fortunate to work for the Minnesota Twins. The Pohlad family has been incredibly supportive during all of this. I’ve started hosting a few zoom calls with season ticket holders the last couple weeks, and I’ve enjoyed interacting with Twins’ fans a bit more lately.

As far as staying busy, my wife, Denise, and I are completing our fifth week of staying at home. Like most people, staying busy has been a challenge. I have a couple of old wedges and I’ve been chipping in the backyard. The most important thing has been trying to stay connected with friends and family, spread out all over California. The separation has been the hardest part.

I’ve really enjoyed the old games on MLB Network, especially the chance to hear heroes like Vin Scully and Dick Enberg. As far as work is concerned, I’ve done enough to have at least a semblance of normalcy. Last night, for instance, Chris Townsend and I did a one-hour pregame show on A’sCast prior to the airing of game #2 of the 1972 World Series—which was then simulcast on NBC Sports California and A’sCast. We interviewed Joe Morgan for 18 minutes, which was a treat. We’re doing another show tonight and six more after that, including a side by side broadcast with Ray Fosse. It’s all the more worthwhile if things like this provide some fun and a diversion for folks.

I’m in NYC, right in the epicenter so that is what sucks. I feel for people who are suffering and people who suffered a lot of losses, although it is the coolest thing at 7 PM every night everybody salutes the first responders by leaning out their windows and cheering.

What am I doing? Working out a little, just got a new Peloton, looking forward to breaking that in. I’ve been doing my own podcast with Jon Sciambi called “Announcers On” where we interview our brethren: Marty Brennaman, Tom Hamilton, Suzyn Waldman etc. A lot of laughs there. Been on a couple of other podcasts as well. Also, the opportunity to catch up with others that I wouldn’t be able to do otherwise during the baseball season.

It is reminiscent of work stoppages in 1981 and 1994.  I was in Houston in ‘81 when we aired radio broadcasts from the early Colt45/Astro era. Gene Elston and I also recreated great games from MLB history on radio. In New York with the Yankees in ‘94…Tony Kubek and I went home to Wisconsin and Florida respectively. In the meantime…I so far have read seven books ranging from McCullough’s ‘Greater Journey’ to ‘Bastard Brigade’ (which includes Moe Berg’s espionage) to Peter Golenbock’s ‘Spirit of St. Louis’…to the account of Florida’s real estate collapse in the late 1920s…’Bubble in the Sun’.  I have been on three podcasts, learned to Zoom with family and friends, taken walks on the beach with my wife Carla, kept in touch with our grandchildren, daughters and sons in law…(who all live within 5 to 15 minutes from us).

All of this and more…while feeling like the proverbial ‘fish out of water’ with no baseball to broadcast.

I am always telling myself that I need to slow down, so I am using this time to do just that. I am meditating every day, doing yoga and exercising on the bike and treadmill in our house. I am reading novels and newspapers, watching movies and series on Netflix and Hulu, taking lots of walks with my wife and dog, and enjoying online concerts by many of my favorite musical artists. I am in touch daily with many friends and family via messaging and phone calls. If this is a preview of retirement, I am okay with it, especially once it includes restaurants and live concerts. I prefer to not think much about the lack of baseball and I have no interest in any of the make believe games being played on computer or video games.

I have a one-year-old son, so spending a lot of time with him, and we have a very energetic chocolate lab, who gets 3 long walks a day. Doing some reading, watching some classic games, like all of us are, and doing a bit of work for Sportsnet, my employer in Canada, on both the TV and radio sides.

Silenced MLB voices (NL) make do; At a time when announcers work nearly every day, their mics are off