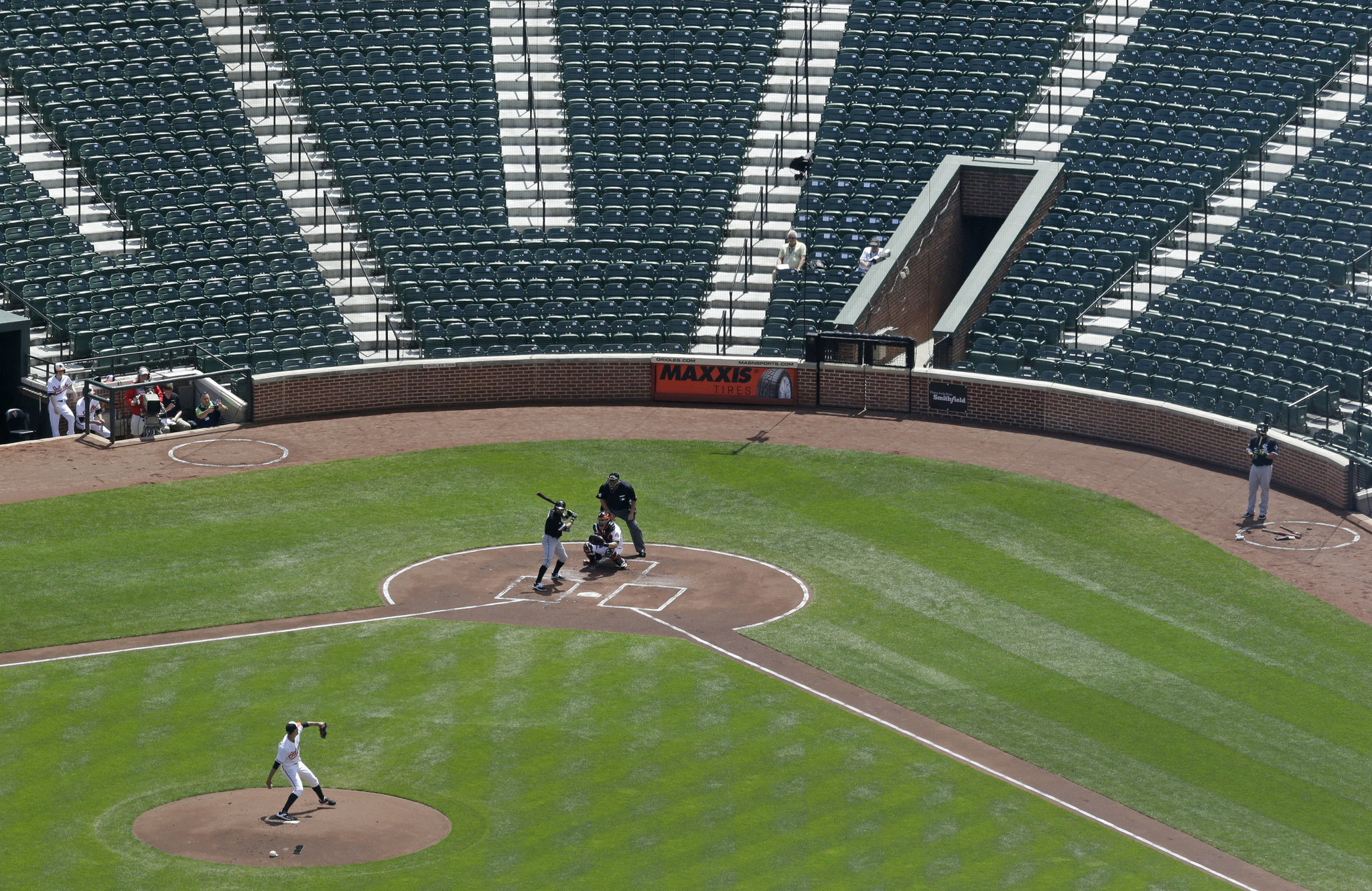 Empty stadium. An actual game with no fans? We'll take it!

While the current state of baseball is up in the air, baseball’s broadcasters have managed to keep busy. We reached out to a number of current broadcasters representing a majority of MLB teams to see what they are doing during this time of shelter at home.

In part one, 13 National League broadcasters respond to how they’re spending their time off. We’ll get to the American League in part two and then follow up with voices’ views on the the current state of baseball and what’s next.

Our dog Luci is wondering what I’m doing home so much, which isn’t usually the case this time of year.

Mike Ferrin does our pre-and-post game shows on radio. I was asked to come up with my all-time favorite D-backs games over the first 22 years. They asked me for 10-15, and I rattled off 26 without blinking.

I’ve been fortunate. The D-backs have had a lot of great games, players and moments from 1998-2019. I’ve called 4 no-hitters, and Randy Johnson’s perfect game. J.D. Martinez provided us with a 4-homer game. RJ’s 3,000 & 4,000 strikeouts. Johnson/Schilling in 2001-2002. The 2001 World Series, which provided so many highlights, including Luis Gonzalez’ winning hit off Mariano Rivera in game seven. Aaron Hill hit for the cycle twice during an 11-day stretch.

Like everyone else, getting bonus family time at home. Doing lots of yard work, cooking a lot, socializing responsibly, and enjoying my home and hometown at a time of year when I am usually shuttling around the National League

During the quarantine I’ve been quite busy actually. What we are doing is rebroadcasting all 17 of the postseason games from 2016, the year the Cubs won the World Series. I open it up with colleague Ron Coomer, then they play the recording. I come in live after the 3rd and 7th inning. We then open it up  for phone calls from the listeners. They have been long games and full nights, so that has kept me busy every evening. I still get my workouts in, I have a side business that I spend time with, I’ve some yard work and helped my wife with some spring cleaning. I try to stay up on reading and getting ready for baseball. I’m staying optimistic that there will be baseball so I don’t want to fall too far out of my routine.

We are no different from many others, lots of family time with my wife and two teenage kids. Dinner together every night is a special treat, television and exercise.

Trying to serve others who are in real need. Thank God for that opportunity. 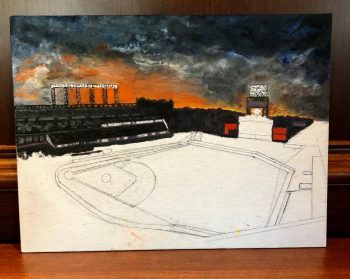 Thirty-five years doing baseball puts you on a regular routine, and to this point, we’re being forced to find other things to do. Besides lots of exercising and walking with my wife, Lisa, I am taking Spanish lessons online.

The Hispanic players will probably still speak too fast for me, but I am hopeful of being able to hold a halting conversation with those who can tolerate my horrible accent. I am doing some sales and promotional work for KOA NewsRadio and the Rockies, and I have also ventured into the talk show world, hosting a 4-hour set on Sundays on the station, until we get back to baseball. My other activity, while waiting to return to work, is a resumption of my oil painting hobby; something I haven’t done since college. I’m attempting to capture Coors Field at sunset from a wonderful photograph done by the Rockies team photographer, Matt Dirksen. I would be happy to send along a photo of the final rendition when it’s finished. I’m hoping it will be good enough to put it up in our booth at Coors Field alongside the many photographs and other memorabilia.

The first thing I do each day is to remind myself what day of the week it is. My wife, Jess and our dog have been social distancing in New Hampshire and have been spending time in areas away from most people. We walk the dog on empty trails as often as we can, just to get outside and move around. I am cooking more and probably eating more too. I have air-checked a number of Dodger games from radio and TV from last season and I also spend a little time critiquing some minor league broadcasters who have sent me their stuff. Keeping up with the Dodgers and anything related to the club has been a daily thing.

The Dodgers have done a wonderful job staying in contact with us and keeping us informed.We have had some video conferences just to stay connected. They also offered us antibody tests as part of a Stanford study, but I would have had to pick up the test at Dodger Stadium, which is a little far from where I am currently hunkered down. I have been following what is going on in the KBO in Korea and the CPBL in Taiwan and watching their games on YouTube, just to see some baseball games where you don’t already know the outcome.

In general, my mantra has become DoorDash, Netflix and sleeping in. This has become Groundhog Months. An occasional walk with a mask on, tough on the cardio. Today is a good day though, the new season of Bosch is up. I’ve been re-watching the Sopranos, I’m about 10-into the 86-episode run. Spend a fair amount of time on the phone or Face Time. A lot of nothing. Since the Dodgers were eliminated in the first week of October, I did a couple of exhibition games in late February. 2-games in 7-months. In the more than 50-years in broadcasting where I talked practically daily, this is the longest I have ever been off the air.

I’m probably doing what every baseball broadcaster is doing. Follow the baseball news online, on the laptop and of course, on the phone.  My wife and I and our daughter are carefully following the guidelines to stay healthy. Social distancing, staying in and around our home, with only necessary trips to the grocery store and drug store. I’ve been reading a lot. Probably 8 or 10 books since spring training came to a stop on March 12th. For exercise, bike rides around the neighborhood, walking and a little time in the pool.

We keep up with family with phone calls and texts like everyone else. We’re giving Netflix, Amazon Prime and other sources a pretty good workout!

Honestly, most of my time so far has been helping the kids with the transition to home schooling. That’s a big part of my day. I’ve had a rare spring free to handle the yard work, something that hasn’t happened in a really, really long time. As for work, we’ve started a video conference call version of our usual Friday radio postgame show with five or six announcers just talking about whatever comes to mind. We’ve also done a few private sessions with season ticket holders and clients, just answering their questions and sharing baseball stories.

I have actually been plenty busy! We (my wife and I) had moved into a new house while I was in Bradenton so, when I returned from Florida, I had boxes and boxes to empty and organize. That will be an ongoing project!

Our radio flagship station is running classic games so I’ve been writing and voicing introductions and post-scripts for each. I’ve been doing research for those games along with other miscellaneous Pirates/baseball-related topics. I’ve also been asked to do several phone calls or Zoom interviews and meetings about the current state of affairs. That’s been a lot of fun because it affords me the opportunity to speak at length about a number of subjects. During the hustle and bustle of a baseball season, interviews are usually limited to just a few minutes. Now, we all have more time for each other.

It has also been very gratifying to monitor many of the social media platforms and read just how important baseball is to so many.  A lot of people really miss the Pirates; going to the games or watching or listening to our broadcasts. That’s quite reassuring.

In 40 years with the Padres I’ve gone through the labor strife and strikes in ‘81 and ‘94 and the hiatus after 9/11. But this is obviously staggering. I’ve been surprised that I can’t watch reruns of classic games. I thought it would fill some of the void. Wrong. It pours salt in the wound in missing the game. Mostly reading novels, sports books and biographies with the occasional TV sports documentary like Last Dance and a local program rerun from ‘18 on Trevor Hoffman’s induction at Cooperstown.

Fascinating. I love baseball now more than ever-likewise with doing college football and basketball. I miss the broadcasts desperately. It’s so hard to see a light at the end of the tunnel with this virus but I know this. If we have ANY form of baseball this season, that opening game will be one of the great highlights of my career-just knowing how much it’s been missed and how much sports fans need it, especially during the pandemic.

I am trying to trick myself into thinking this is just a continuation of the off-season. My off-season daily routine includes working out in the morning and taking an on-line Spanish course.  My son is supposed to be studying in Chile for his fall semester of college and my wife and I have a trip booked to visit him in December. This upcoming trip has inspired me to try and learn some Spanish. While the trip may not happen, I’m not going to give up yet. With no baseball, I’m really missing out on a chance to practice my Spanish in the clubhouse.

And, the unexpected extra family time at this time of year is a bonus. I am working with my daughter every day on her softball skills, which normally I don’t get to do. My son has also surprised me a couple times with the Field of Dreams line… ‘Dad, do you wanna have a catch?’ So we have been playing long-toss and airing it out a little bit. My arm is hanging!

From a work standpoint, I’ve recorded several podcasts with my Nationals radio broadcast partner, Dave Jageler, looking back at the Nats post-season run and responding to fan questions. We will continue by reviewing great games in Nationals history. We are also planning a live webcast.

I was part of a campaign with all of the Voices of DC Sports, recording cameo video shout-outs by request and donating all of the proceeds to Covid-19 relief. Our campaign lasted a few weeks and we exceeded our goal. I’m continuing to do these with donations to #Nats4Good Community Response Fund. We’re also doing video shout-outs to Nationals Season-Plan holders, thanking them for helping to flatten the curve and telling them we hope to have baseball soon.

Great to find out what everybody is up to. I remember in 1981, during the strike, Brent Musburger hosted a show on CBS Radio and checked in with announcers around the country on how they were doing. Harry Caray was going crazy (shocking!) and Vin Scully said, “Brent, I have six kids. I’m doing THEIR play-by-play.”