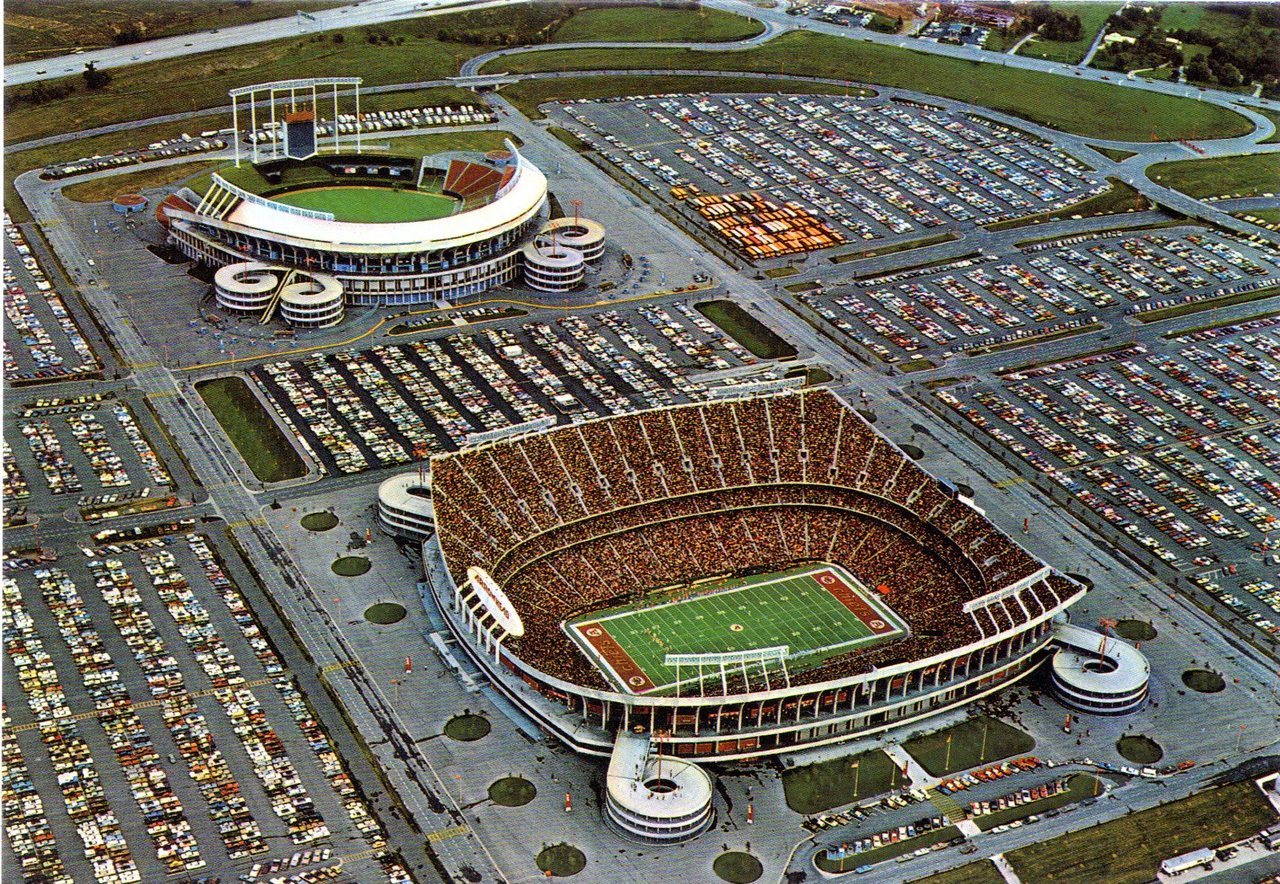 Harry Truman Sports Complex in Kansas City, Home of the Royals and Chiefs

As Franklin Roosevelt passed into mythology, he was succeeded by a largely blank slate. Harry Truman had been named FDR’s third vice president in 1944 because incumbent Henry Wallace was too liberal. The president and Truman barely knew each other. Ultimately, the electorate got to know the bespectacled 33rd president less for his poor sight than great vision.

Born in Independence, Missouri, Truman rarely played sports as a boy, “afraid of the rough-and-tumble of the schoolyard, and because of his glasses, felt incapable of [anything] that involved a moving ball,” wrote David McCullough. Instead, he read ancient literature, history, and presidential biography—to another historian, Stephen Ambrose, Truman’s private collection of books “the best possible training a . . . [would-be] president can have.”

At his library and museum in Independence, more than 30,000 books, most of any president, evince that love. The building shows Truman’s support of American exceptionalism extending even to cards. Of playing Churchill, he told aides, “The reputation of American poker is at stake, and I expect every man to do his duty.” Harry thought it an index of character, keeping a sign with a poker phrase scripted “The buck stops here” on his Oval Office desk.

For Truman, Japan’s surrender on September 2, 1945, in Tokyo Bay, began the transition from war to peace. Public priorities changed: Where were the housing and domestic goods? In 1946 10 Senators players were found to be temporarily living in the clubhouse. Live together, lose together. The first task of Truman’s “Fair Deal” was to brook rising prices and shortages. After that, Opening Day would be a lark.

On April 16, 1946, Truman tossed the first ball of the season’s first game for the first time since before America had joined the war. Few gestures could have better signaled normalcy, of the horror that took humanity to the cliff and back being over. A week earlier Senators owner Clark Griffith and National League head Ford Frick visited Harry to present his season passes. Later Griffith termed him in “rare form,” saying he had given his visitors a “preview” of his first-ball form. He became the first left-hander to launch the season, firing the ceremonial first pitch into a maze of players, each grasping for the ball.

When Truman died in 1972, The Washington Post said that Harry was a decent horseshoe pitcher in Missouri, “but if he had any other sports interest, it was confined to whipping the daylights out of Republicans, whom he considered his natural rivals.” Ironically, he likely enjoyed more than any other president simply being at the park—throwing the first pitch about every way you can: one year righty, one lefty, the next both arms simultaneously, each cupping the pitch—the first to throw the ball left-handed and right-handed from the presidential box. Hell’s bells, Harry had a blast!

According to Griffith, no president threw a spitball—“the Great Expectoration”—at his park at an opener, nor ostensibly any pitcher after it was outlawed before the 1921 season. “When they banned the pitch they let those boys who threw the spitter spit out their natural lives”—Burleigh Grimes the last to throw it in 1934. “Of course, those rules don’t apply to Harry Truman. He can throw it any way he wants to at my park”—and did. From 1945-52 he forged a 4-3 Opening Day and 8-8 overall record, his 16 games at Griffith a presidential high.

He also had a job to do, starting to create a color-blind America. Truman desegregated the American armed forces. On August 13, 1945, a group headed by Branch Rickey bought the Brooklyn Dodgers and later signed Jackie Robinson, who broke the color line in 1947. Next year a Gallup Poll reported that Truman would lose election to any Republican, including eventual GOP nominee Thomas Dewey. Somehow the incumbent—“Give ’em Hell, Harry!” his folkloric chant—felt he could win with a Tooth Fairy type of certitude. Odds against him rose to 15–1. On election day Harry was asleep by 8 p.m. He won by more than 2 million votes.

Meanwhile, Bess Truman, the greatest baseball First Lady since Grace Coolidge, watched, scored, and listened to games daily—many on the second-floor Truman Balcony, finished in 1948 and overlooking the South Lawn of the White House. In 1953, Harry left office. In 1955, the transplanted Philadelphia Athletics opened their first season in Kansas City, Harry tossing their first ball. In 1973, the city’s Harry S. Truman Sports Complex opened, among the best multi-sports sites.

While health allowed, the Trumans frequented the A’s and Cardinals in person, Harry saying pricelessly, “May the sun never set on American baseball.” Yearly, America’s last president to lack a college degree substituted a library for a classroom. As an epitaph, Truman liked to quote a stone from the cemetery at Tombstone, Arizona: “Here lies Jack Williams. He done his damnedest.” More than most, Harry’s damnedest was enough.