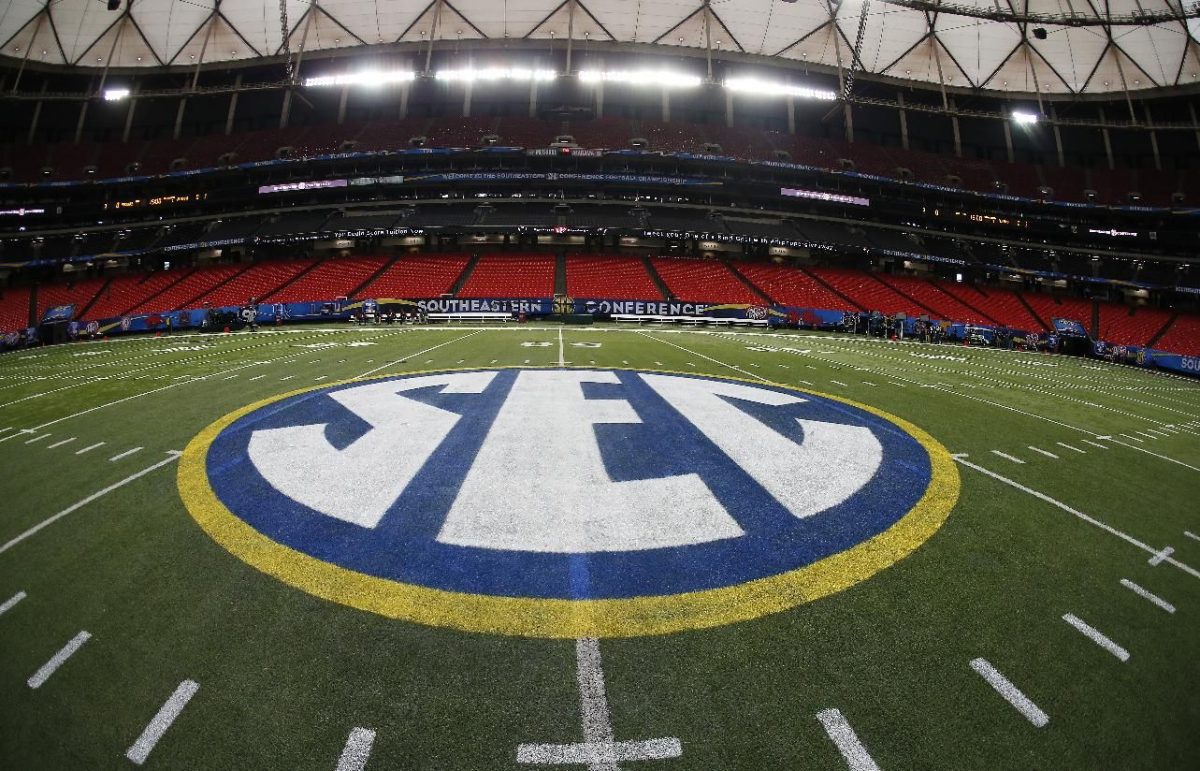 Nessler: “The best compliment I can get is when I’m told that I sound like Pat Summerall”

Two seasons into the SEC telecasts, all’s good. There’s been little carping about Nessler, if any. The league’s rabid fans seem to have accepted him. Brad’s easygoing demeanor through three decades on network television continues to serve him well.

Lundquist was a treasured figure across the league’s footprint. His hearty laugh was contagious. He was recognized and admired throughout the SEC. “Verne would step into a restaurant in any SEC town and could choose his own table,” Nessler told me last week with a relaxed chuckle.

As his popularity swelled, Lundquist was fondly referred to as “Uncle Verne.” Nessler says, “I’m Uncle Brad, but only to my own nephews and nieces.”

Brad recognizes that on Saturdays in the SEC, it’s all about the game, nothing extraneous. So he doesn’t intrude. He never has. His fundamental quality is a commitment to a blended discipline of preparation, simplicity and brevity; an understated mix that viewers welcome.

You might say that Brad is also the perfect setup man for his emotionally charged partner Gary Danielson. The two have a history. They worked together and developed a  chemistry in the past; a factor that likely entered into the decision-making process of CBS Sports boss, Sean McManus.

Nessler tells me that he and Gary will occasionally Facetime with Verne after meeting with Nick Saban or others. Viewers, I’m sure, would like to be a fly on the wall for that conversation.

A raised Minnesotan, Brad got his break in Atlanta radio. When Bob Neal was transitioning from Falcons radio to television at Turner in 1981, John Lauer, Brad’s boss at WGST, suggested that he prepare an audition tape.

Brad had never done the NFL so he went to old Fulton County Stadium, stood in an open-air camera bunker to record the game into a cassette tape recorder. At halftime, the skies opened up, shortening the audition. But Brad still gave the truncated recording to Lauer who kept the cassette in his desk drawer. When a decision had to be made for Neal’s replacement, Lauer recommended Nessler who got the gig in 1982.  After calling Falcons games for seven seasons, he did the Vikings on radio for a couple seasons too.

The shortest distance between two points is a straight line and you might say that Nessler has now come full circle.

He first intersected with Lundquist when the two were NFL radio announcers, Verne in his final year with the Cowboys and Brad in his first year with the Falcons. Over time, Lundquist was impressed with Nessler and told the powers at CBS that they should look at his tape. CBS did and it hired him in 1990. He’s been a network sports voice since.

Brad moved to ESPN in 1992 where he spent 24 years before returning to CBS to succeed Verne. During that period, he did tons of college football and basketball, a couple of seasons of the NBA and one season of Thursday Night Football for the NFL Network.

Brad and I had a chance to talk.

You left ESPN after many years. How did the SEC gig on CBS evolve?

I always watched the 3:30 game with Verne and Gary (Danielson) even if I was in my own booth in another city, getting ready for my ESPN assignment. After well over twenty years with Disney/ESPN, I knew Verne’s reign was coming up and at that point in my life, I thought it was the perfect move to make.

My contract with ESPN was ending. CBS represented a confluence of opportunities, teaming up again with Gary , doing some regular season basketball and the NCAA Tournament. When I returned to CBS, little had changed since I left  in the early 90s. The theme music is the same too.

Jumping for a second to basketball. You do four four games the first day pf the NCAA Tourney. How difficult is it?

It’s lots of work. Shoot-arounds the day before are like a blur. You have to compartmentalize your mind. Do a game, forget it and move to the next one. After two games, psych yourself and think, ‘only 2 more to go.’ It’s also tough on the voice—especially if you’ve had a couple barnburners.

Working with Gary Danielson wasn’t a new experience. You worked with him in the past at ESPN/ABC. What’s it like partnering with him now?

Gary and I were together for eight years at ABC/ESPN. We stayed in touch frequently so it didn’t take more than five minutes for us to feel comfortable together. We looked at one another during our first broadcast and we had a little twinkle in our eyes. We kid people. It was like we were married, divorced and now we’re remarried. Remember, both our careers grew in the 15 year gap when we were separated. Our experience with others helped both of us too. Gary had Verne and Brent Musburger;  I had Bob Griese, Lynn Swann, Todd Blackledge and Paul Maguire, one of funniest guys you’ll meet.

After accepting the Giants job in 1979, Lindsey Nelson pulled up for the first time at the press parking lot at Old Candlestick Park.  When he did, the lot attendant asked him who he was, Lindsey told him, “I’m the Giants broadcaster.” The attendant peered at Lindsey and said, “You don’t look like Lon Simmons.” It isn’t easy to succeed legends. Fans need time to break old habits. You followed the beloved Verne Lundquist. How’s it going?

The fact that during the BCS years, the broadcasts were split between Brent, Keith Jackson and me, it made it easier to be accepted in the SEC. I also consider Verne a mentor which helps.

When ESPN first got the NBA rights in 2002, you were assigned the lead play-by-play role. You did it for only a couple years. Why didn’t it last longer?

For one, I worked with Bill Walton and we had zero chemistry. I also underestimated the demands of the length of the season. The first year I worked until June 20th or thereabout.  Before you knew it, I had to head right back to football. Frankly, I didn’t like the NBA as much as I do college. Funny, I grew up a Lakers fan. Still, I’m happy to say that I did Michael Jordan’s last game and LeBron James’ first.

I sat down with Mark Shapiro who was then in charge at ESPN. I suggested to him that we do a Saturday college basketball ‘game day,’ similar to what ESPN does with college football, and then follow it with a major Saturday night telecast on which I would join Dick Vitale. He agreed and I was back doing college.

We know you’ve done lots of football and basketball? What other sports have you done or would you like to do?

At CBS, I did speed skating and worked with Eric Heiden at the Olympics. It was hard to do but I absolutely enjoyed it, I also did professional karate at one point early in my career. Baseball is too slow for me, although I did some in college.

For so many years, Larry Munson called Georgia games and Al Ciraldo did Georgia Tech. You worked with Al who was an Atlanta legend. What were they like?

I worked with both Al and Larry, two of the biggest homers you’ll ever meet. I wasn’t trained that way. I was more straight down the middle. I covered a Ga Tech basketball team that went 4-23, I think. Still, I loved what I was doing but it was brutal. Munson was always complaining or worried about those Georgia teams. He would go on, “I don’t know what we’re going to do. Our running backs are injured. Our offensive line is weak. He was doomsday but man, he was loved.”

You were raised in the Twin Cities. Which announcers influenced you as a kid? There were some good ones; Halsey Hall and Herb Carneal on the Twins and Ray Christensen on the Gophers. There was also Ray Scott who did the Twins.

I listened to Ray for 40 years. He influenced me, I learned a lot from him. One of my dad’s friend called me Halsey – because he knew I wanted to be an announcer, so he started to call me Halsey for the Twins announcer. I had a little transistor with an earplug that I would put  under my pillow. It’s how I went to sleep. My mom would check on me later. Once I was asleep, she would pull the transistor from under the pillow, shut it and set it on a table.

If on a scale, network announcer Ray Scott was a minimalist and Brent Musburger talkative, how would you describe your style?

I’m more Ray. He was my first hero. I watched him on the Packers; “Star, Dowler, touchdown.” Pat Summerall says he learned from Ray so I am more the way they were. Ray had a bar in Minneapolis. He  asked me to go on his radio show. I was thrilled. When anyone says, “You sound like Pat Summerall,” it’s the greatest compliment. When I feel I might have talked too much- I’ll think back to those two guys. Guys who grew up in radio find it tough to tone it down on TV. Radio is like a faucet. It’s hard to shut it off. I hadn’t done radio in many years but did a couple games for ESPN in the BCS. Todd Blackledge asked me why I was talking so much. I told him, our audience can’t see the game.

Hope I’m smart enough to hang it up when I lose the spin off my spiral.