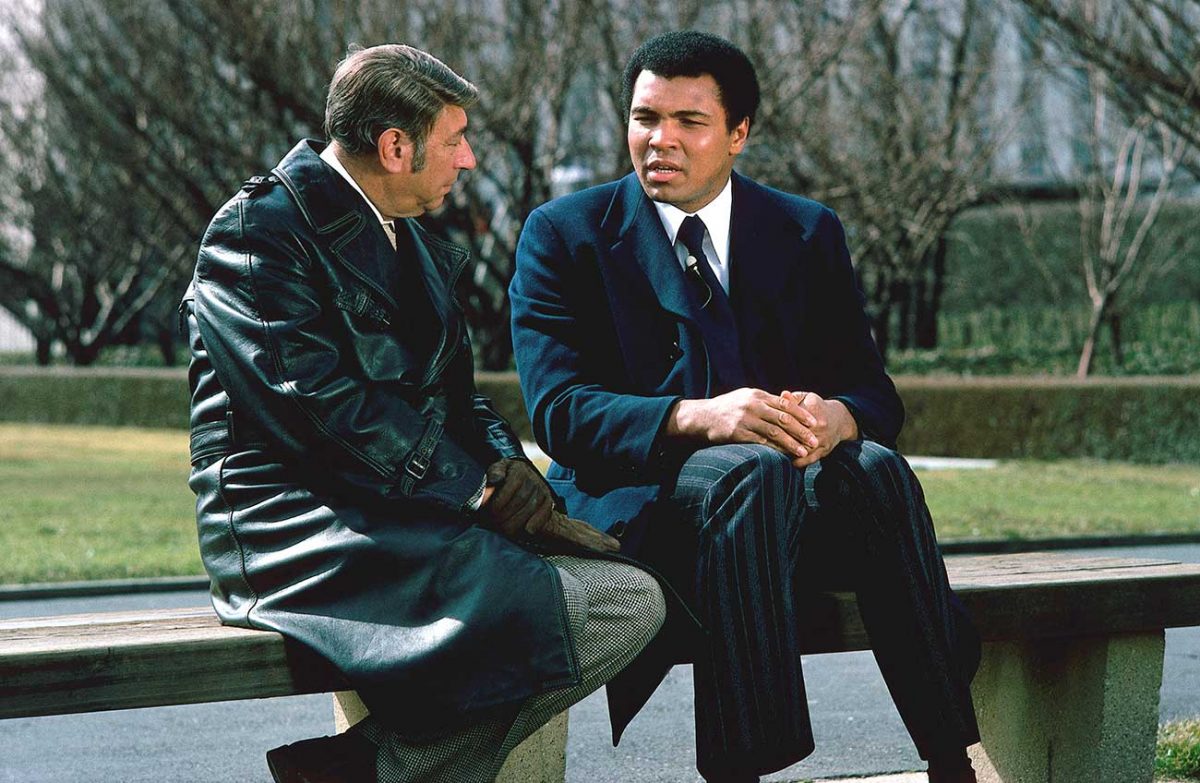 Howard Cosell and Muhammad Ali in 1980

But it wasn’t always that way.

When he passed in 2016, Muhammad Ali was celebrated by most as an icon, but not many today remember the decades of separation following the Vietnam draft. Martenzie Johnson in the Undefeated: “Never mind what was said about Muhammad Ali being a transcendent colorblind fighter when he died in 2016; most of (white) America hated the loud-mouthed, flamboyant black man who refused to fight in Vietnam.”

More than half a century ago, some of the big name sportswriters during Ali’s prime were antagonistic. Writing about the man then called Cassius Clay, New York Times’ sports columnists Arthur Daley and Red Smith were in fact highly critical. Smith: “Squealing over the possibility that the military may call him up, Cassius makes himself as sorry a spectacle as those unwashed punks who picket and demonstrate against the war.” While Daley referred to the boxer as a “loudmouthed braggart of irritating proportion.”

Their views were hardly uncommon. Times were different then. There was a groundswell of animosity in the 60s and 70s when the Celtics’ Bill Russell and Olympians Tommie Smith and John Carlos sought to inspire change. They risked their own careers and more in the process. Even Colin Kaepernick, just a few years ago, was harshly criticized for kneeling during the national anthem.

While most columnists and media members sided openly or tacitly with the players, there were fans and viewers who found the messaging overwhelming. They felt that it just got in the way of enjoying the games. Sports many feel are a diversion.

Gary Abernathy, columnist for the Washington Post and avid NBA fan gave us an eyepopping response on how he handled seeing politics and sports collide, “I had read that Black Lives Matter would be scrawled across the court, and players could wear social-justice themes on their jerseys, and while I disagreed with those choices, I was ready to accept them. Finally, the national anthem was performed. When players and others locked arms and knelt, I said aloud to no one in particular, ‘I’m done.’ I turned the station and did not tune back in.”

Abernathy’s sentiment might well be representative of a broad swath of fans. Bloomberg reported that year-to-year TV ratings of the NBA Finals were down a whopping 51%! With no solid evidence as to why the numbers have fallen so dramatically, television and league executives were left wondering how long they can keep this activism prevalent in the telecasts.

Former and longtime New York Times writer William C. Rhoden, now of the Undefeated, explains his view by stating, “Some players may simply be along for the ride. That’s why we’re beyond kneeling.” From the outside, he says, it feels like all the players are in this together. But in reality they are not. Rhoden in fact recognizes the bravery of Orlando Magic forward Jonathan Isaac for standing during the national anthem while the rest of the court kneeled.

This past August, outspoken African-American sports analyst, Jason Whitlock elaborated on what he felt was the ulterior motive behind athletes joining the fight for change, He says, “It’s a tool being used to promote themselves.” Whitlock went on to explain that the attention players get for their activism helps them create a public image suitable for a well paying salary after sports.

Whitlock also proposed his view on the matter of police brutality adding, “Black men live in fear of the police, that’s all BS, particularly if they have any life experience in a black community. You are more likely to be struck by lightning than to be killed by a cop.”

(Fact checking: Actually about one in every 1,000 black men can expect to be killed by police. And according to National Geographic, the odds of being struck by lightning in your lifetime is one in 3,000.) 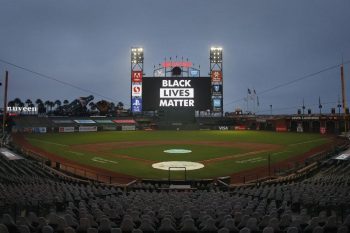 Whether you think politics belong in sports or not, the media has taken notice of professional athletes seeking to make a statement. That wasn’t necessarily the case a generation or two ago.

Still, in the 1960s, network icon Howard Cosell strongly backed Ali in his fight to avoid the military draft. Let it be pointed out that Cosell himself was a military veteran.

Does activism have a home in sports? While many think yes, conservative writer Jonah Goldberg of The Dispatch, illustrates how the athletes are dividing instead of unifying America, “They might just be launching a woke arms race across professional sports, that will leave the country more politicized and more polarized and render sports another realm where we can’t take a break from what divides us.”

In a Fox News article regarding the role of protest in sport, Senator Kelly Leoffler (Georgia Republican) made her opinion clear on the matter as she too had the same view as Goldberg, “The truth is, we need less — not more — politics in sports. In a time when polarizing politics is as divisive as ever, sports has the power to be a unifying antidote, and now more than ever, we should be united in our goal to remove politics from sports.”

In 2018,  Laura Ingraham of Fox News dismissively voiced the same belief by advising activist Lebron James to “shut up and dribble,” following political commentary from the NBA star. 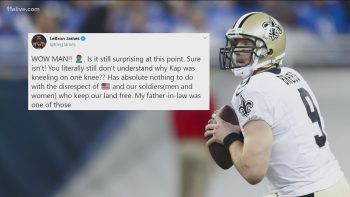 NFL quarterback Drew Brees first saw kneeling as an act of disrespect. “I will never agree with anybody disrespecting the flag of the United States of America or our country,” he said firmly. His view mirrored the stance that many had expressed earlier, including NFL Commissioner Roger Goodell, following the initial kneeling protest by Colin Kaepernick in 2016. Brees’ statement this past summer however, was met with much more backlash by players. New Orleans Saints’ teammates and other professional athletes lashed out at the veteran quarterback following his comment.

Although many athletes disagreed with the quarterback, some media outlets felt like there was nothing wrong with his statement. “Brees is entitled to his thoughtful opinion, one shared by well over half of the public, against athletes taking a knee during the national anthem.” Quin Hillyer of the Washington Examiner wrote. Going on to illustrate how the statement made was “respectful, gracious, and dignified.” Hillyer was not alone in this perspective. Fox’ Ingraham expressed her view by explaining he should have a right to his own opinion. She had no suggestion though that the quarterback should shut up and throw.

The media has generally moved toward a more progressive stance in how they write about athletes taking advantage of their platforms to inspire change.

A half century ago, pioneer Howard Cosell was seen as an outlier for being the first white man in the media to support Muhammed Ali. But the world has turned. Outliers now are those who believe it is wrong for professional athletes to use their platforms to publicly push their views.

Kyle Webber is a senior at the University of Colorado Boulder, He's currently studying Communications with an emphasis in media design. He is an avid Broncos and Nuggets fan, and hopes to become a successful copywriter in the future.

Excellent piece. For what it’s worth, Red Smith did evolve–he became more liberal with age and joked that it may have had something to do with remarrying after his wife’s death and now being around “five Vietnik stepchildren.”