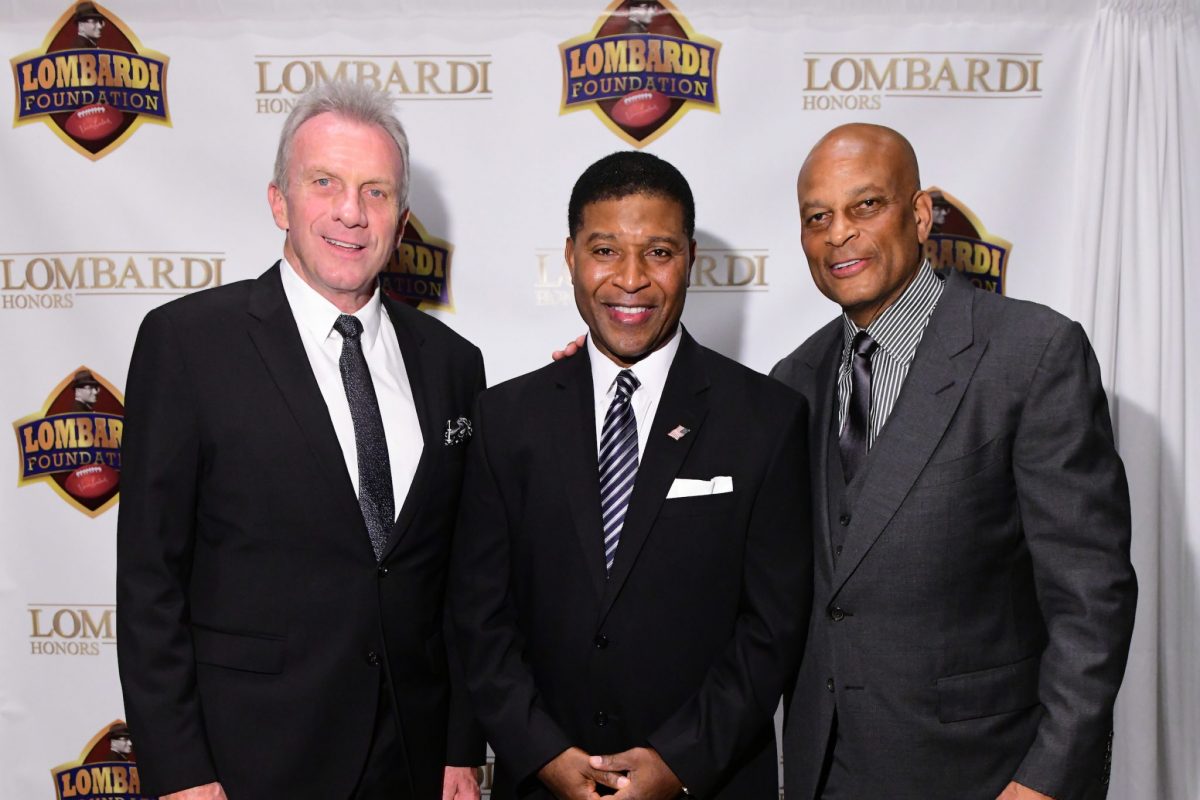 I had an opportunity to talk with Spencer Tillman, former NFL and Oklahoma star, who currently travels with Tim Brando on Fox’ College Football Game of the Week. He seemed equally comfortable in the booth or in the studio. Spence has been with Fox since 2015. He spent 16 years for CBS Sports in the College Game Day Studio.

In Houston, where he resides,  Tillman also co-hosts KTKR-TV’s Houston Texans, Inside the Game in Houston.

Tillman was an All-American running back at the University of Oklahoma (1983-86). He  helped lead the Sooners to the 1985 national championship and was drafted by Houston at the 1987 NFL Draft. After eight seasons in the NFL, including with the Super Bowl XXIV champion San Francisco 49ers in 1989.

After football, it was onto broadcasting where one stop was the Big Apple on the ABC affiliate, New York for a couple years,

We had a chance to communicate exclusively about his career.

Looking at your career, you have had some sparkling success on both the college football field and in the NFL. You won a championship at Oklahoma in 1985, when the team was led by the colorful Barry Switzer and you were a captain of the Niners Super Bowl team of 1990, coached by Bill Walsh. Switzer and Walsh made their names in college. How were they different?

I likened Coach Switzer to the Apostle Paul. That tended to get people’s attention.

He was “All things to ALL men might win some.” He was quite successful at that. He had a profound impact on me, when he told me he loved me. I was a freshman; standing in the tunnel prior to the then annual clash between Nebraska and Oklahoma. That game ALWAYS had national title implications. He quietly put his hands on my shoulders as he said “Spence, Doug, Kathy and Greg think the world of you and so do I. I love you son. I attempted things in that game that I’d never done before. He inspired me.

Walsh was very forward-thinking and aware of all aspects of “being” that what impacts, human performance.

He was a master at influencing outcomes, based on those realities. It wasn’t until he was seven months from passing that he asked that I come to San Francisco to visit. Longtime friend and broadcaster, Ron Barr, facilitated the meeting. We met at a Chinese restaurant on the first of three days. What stood out, among the many conversations, was the revelation that he intentionally put me near Steve Young and Joe Montana, in the locker-room.

I had no idea why, until Dr. Harry Edwards educated me. Walsh was a big leadership guy, quite influential. He needed examples. I backed up Roger Craig but had starter energy and focus, same passion and bounce in my step EVERY day. It’s how I was reared!

One day, after practice, Steve Young asked me “how do you do it?” Do what I said. “Come out here everyday and you could be starting for a lot of teams.” That question lead to Tuesday night Bible studies with a small core group: Bubba Parish, Brent Jones, and a few others. Some time later, Dr. Edwards asked if “I’d figured it out yet”?

You have the distinction of being a tri-captain with Joe Montana and Ronnie Lott on the 1990 Super Bowl team. That’s pretty good company. What were those two huge names like and what made them different?

I love and appreciate both of them. I brought both of them to Houston two years ago for the Lombardi Honors and we had a blast, raised a lot of money for good causes. I think only after the cheering stops can you appreciate the full weight of the influence a person has had on you. Whether it was granting me interviews while a player or dressing up like Santa Clause for poor families in East Palo Alto.

What we did on the field, facilitated the trust to collaborate on matters outside the white lines. Both are elite performers. What it taught me? It’s simple really….Discipline shows up on time when inspiration does not. The length they went to in order to be available for their team had a profound impact on me.

A running back at Oklahoma, and special teams for the most part in the pros, you found your niche. How did you handle each role?

Good question. The late C.O. Bracado, legendary Pro Football Scout, said he was so proud of me for playing the way I do on teams. “Not many guys are capable of being starters, embrace the role the way you have.” I had one seed… all out! It’s the way I’m wound. It was also my circumstances. I was newly married and broke as the Ten Commandments. I needed to make that team! That meant being willing to be a bit crazy, smart and always high-energy. “Make them hear you.”

You seemed to wanted to go into broadcasting early. Why? What about being behind the mic turned you on?

I was going to be either a lawyer or petroleum engineer. The two professions aren’t as disparate as they seem. Barry Switzer actually lured me into the broadcast business. I was hooked early. He introduced me to an icon and pillar in the industry in those parts: Lee Allen Smith. Lee Allen was the President of KTVY, NBC-TV in Oklahoma City. Karim Karim was running PM Magazine there. I did a tour of the entire operation and immediately fell in love with the news-gathering process. Al Aeschbach was my anchor on the radio side of things. He actually allowed me to host his show in the summers when he went to Europe. I was only 18-19 years old. He’s a Oklahoma Hall of Fame Broadcaster! I owe him a lot.

How did you learn the fundamentals of the on-air business? Any special broadcasters tutor you?

Practice, practice, practice. I got laughed at for taking a recorder with me everywhere I went in college and as a pro. I set it a mini studio in my dorm room at training camp both in Houston and San Francisco. I had an insatiable appetite for words. I loved my English teachers. Mary Faye McFarlin taught me everything I knew about Shakespeare, including the fact that he (Shakespeare) was a racist. She didn’t have to tell me that but she was all about education and telling the whole truth about what she taught. I would often go back to Tulsa as a pro and have lunch with her.

Working with Tim Brando for all these years, 14 or so in the CBS Studio and now at Fox as a play-by-play/analyst team, what makes you fellows work so effectively symbiotic? What do you learn from one another?

Respect for each other’s talent, plays a roll too. And patience to wait until the other embraces change that’s needed to make us all better.

We are committed to the process of being the absolute best we can be. Tim is a pro.

Tim has a tremendous gift for and a need to perform. It’s instinctive for him. I wish more folk had that trait! We all are wired and motivated by different forces. Our experiences are all unique. I understand who he is and why he is the way he is! It’s like in marriage. You have boundaries and mutual respect but you put up with more because you understand the person’s heart. We love each other. Our families do as well.

Who do you project as national champs?

Ohio St. Jim Knowles (DC) was the most consequential hire in college football last year. I was bullish on him before anyone knew who he was. He’s allowed Ryan Day the freedom to be at his best as an offensive creator and administrator.