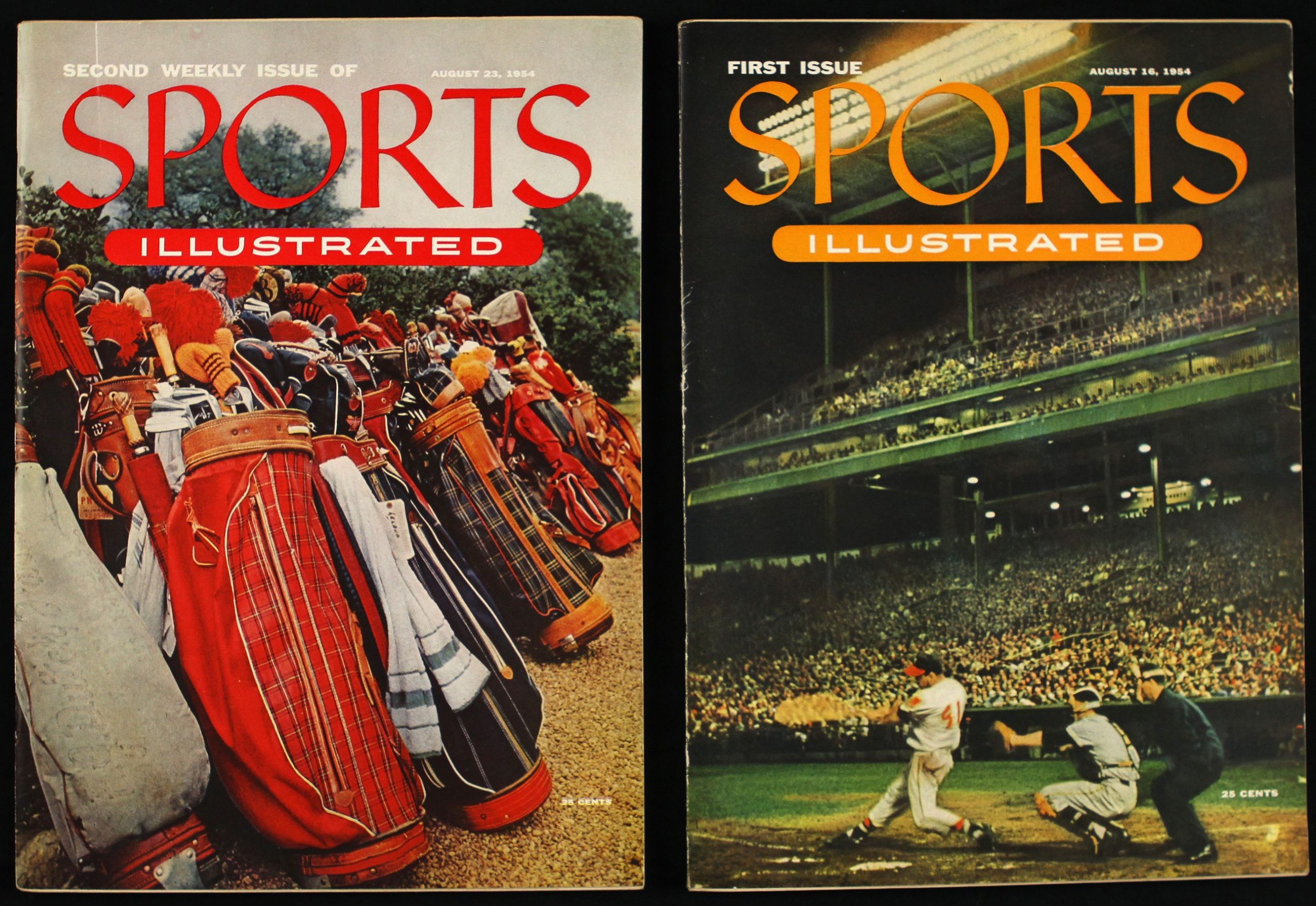 Sports Illustrated's first couple issues in 1954. The magazine was a print behemoth for a half century

October 3rd has a special meaning to sports fans, particularly fans of baseball.

On Oct. 3, 1951 Bobby Thomson hit the shot heard ‘round the world, lifting the Giants to a stunning, playoff winning, come from behind win over the hated Brooklyn Dodgers.

But for many in the thick of the sports media industry, the day now has a new and infamous meaning.

On Thursday October 3rd 2019, over 65 years after its first acclaimed issue, Sports Illustrated laid off over 40 members of its editorial staff. The layoffs came after an operations change saw Seattle start-up Maven take over control of the historic publication.

Regardless of your place in life,  if you are just starting out, years in, or decades removed from a career in sports journalism, many, including myself, have shared in the anticipation of coming home from school on a Thursday hoping that magazine would be sitting in my mailbox.

While the layoffs have affected long time readers, the magazine industry and sports media in general, Oct. 3rd was especially hard for those who have had their bylines within the magazine’s covers. The following is a compilation of responses of six former Sports Illustrated writers.

Dan Greene, Jake Fischer, Jackie Macmullan, Joan Niesen, Jeff Pearlman and Joe Posnanski share their thoughts on what made Sports Illustrated great, what it was like to work at the publication, where the leadership’s strategic decisions faltered and what SI’s future holds:

For you, when was SI’s ‘prime’ and what made it special?

Jake Fischer, at SI from 2015-2019: “SI’s prime, to me, was in the early 2000s, when I would be lucky to pick one up in the airport during any family vacation. But after working there for a while and hearing about the company’s lore, I’d have to say it was probably well back in the 1980s or even earlier”

Jackie Macmullan, at SI from 1995-2000: “SI was at its best when they were writing terrific long form pieces. Gary Smith, Frank Deford, George Plimpton come to mind as the linchpins of that kind of reporting and writing.”

Joan Niesen, at SI from 2014-2019: “I think I’d say the 1970s and ’80s, without going into the Vault and checking the dates of some of my favorite stories. To me, what made SI special was that it could get me to read about anything: boxing, basketball on an Indian reservation, horse racing. It wasn’t just, oh, here’s a great piece about the best athlete of the year.”

Jeff Pearlman, at SI from 1996-2002: “I mean, for me—from my vantage and experience—it was probably the late 1970s, when you had ALL these legends writing, when the magazine could be 120, 130 pages, when they were THE place to read sports.”

Joe Posnanski, at SI from 2009-2012: “I think Sports Illustrated’s prime, like baseball’s prime, will always be a personal thing. For me, the prime was in the late 1970s and throughout the 1980s because that’s when I was young and impressionable and read it religiously.”

How did your perception of SI change working there?

Dan Greene, at SI from 2010-2019: “It was a pretty intimidating thing to walk into such an institution — the place that, once I began reading it regularly in college, became my absolute dream destination — as a 22-year-old intern, but the people there were welcoming and helpful at every turn.”

Macmullan: “I didn’t realize how many edits there were for each story. It was a bit daunting, initially. Also, I was a newspaper writer at heart, and it took me some time to adjust to writing with a longer view.”

Niesen: “In some ways, the place became more impressive once I saw how the sausage was made and all the intricacy of what went into getting a magazine out each week. But I think the one thing that left me a bit disillusioned once I was on staff was how antiquated some people’s views of print vs. digital were–and this was in 2014.”

Pearlman: “Truly, it felt like playing on the MLB all-star team. Surrounded by legends, craftsmen, stars. I was there about six years, and it was mostly dreamy.”

Posnanski: “I would not say my perception of SI changed as much as my perception of the business…it was also clear that magazines (and newspapers) were beginning to lose their hold on the American public. That was a hard realization.”

What were your thoughts on SI once you left?

Fischer: “I believe it’s current model under TheMaven leadership is destined to fail.”

Niesen: “The SI brand has been irreparably damaged, and the way the leadership from ABG and The Maven has seen fit to slander past leaders and the work we were doing makes me despise the whole situation even more than I did when they took over in such gut-wrenching fashion”

Looking at things now, where, if at all, did SI’s strategic decisions fail?

Fischer: “I think SI failed to adjust and adapt to the internet. And it has never recovered.”

Macmullan: “I think Sports Illustrated, like many other sports publications, was a little slow to embrace the digital world. And, for a time, it felt to me as if they drifted from what made them so special, which was the smartly written, insightful stories about the athletes we cared about.”

Niesen: “I want to be clear: I don’t think the place that SI is in now is primarily the result of internal failures…The print-digital divide persisted far too long at SI, and the company as a whole failed to understand until too late that a magazine is as much its website as it is its paper copy.”

Pearlman: “For me, the biggest screwup was the website. Or lack thereof. Why does SI’s site continue to lag? Why isn’t it amazing? For some reason that was never fixed, and as a result young people looked elsewhere. It breaks my heart.”

Fischer: “I don’t know if there will be an SI in two years. TheMaven replaced dozens of quality journalists with independent contracts who incorrectly and poorly report on major news items. The company’s reputation is diminishing by the day and more and more good people are eager to leave.”

Greene: “I hope there still is. In what form, I’m not sure. That goes for most media outlets, especially in sports, but given the new leadership group’s direction and record, things seem especially uncertain.”

Macmullan: “I hope SI will be here in 20 years. It is an iconic magazine that can lay claim to some of the greatest journalists of all time. But magazines are on life support – all of them, not just SI.”

Niesen: “Maybe someone will rescue it from TheMaven before it ends up a smoking pile of rubble. I don’t know. I think SI will certainly exist in IP form. I hope people will still buy and frame reprints of covers. I hope teams will still have old covers hanging in press boxes. And its stories will certainly persist in anthologies…I hope SI stories still form the backbone for showing young journalist what the best work looks like.”

Pearlman: “I hate to admit this, but as four or five annual commemorative issues and, maybe, an annual Swimsuit issue.”

Posnanski: “I can’t look two weeks into the future, much less 20 or 30 years. I believe some basic things. I believe people still hunger for great sports storytelling. I believe that SI still has an incredibly wonderful stable of amazing writers. And I have hope. But beyond that, I am not naive or blind. It’s clear that SI is facing serious and frightening challenges, not 20 or 30 years down the road but right now.”