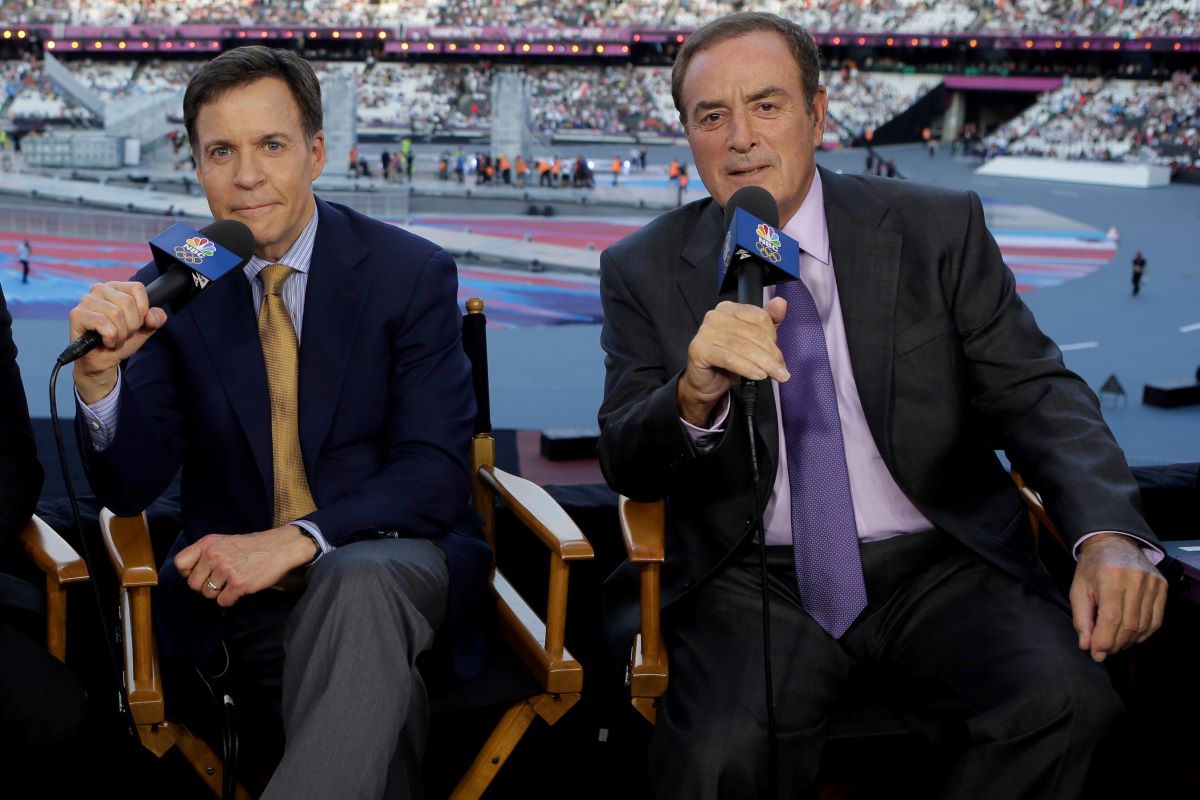 Bob Costas and Al Michaels - among the best ever on baseball and football.

Broadcast sports has greatly changed over the years. Networks, local stations and certain segments of the media now frequently spends as much time promoting game-day announcers as they do the teams they’re covering. The voices of those describing the action are celebrated as much as the actual play. That’s show biz, which in reality is what a ballgame is – just an off-Broadway entertainment production, in which the ballplayers are the star performers and the game announcers are role players.

Using the Broadway analogy, sports announcers are actors who depend on authors. At one time radio announcers would recreate and embellish what happened on the playing field because listeners to the games on radio couldn’t see what was actually happening. Thus, a Texas League single often became a line drive on the air or in the morning newspaper.

Then, when television became the dominant medium, professional sports announcers were heralded as the greatest thing since sliced bread. But that era didn’t last too long. To entice viewers the networks began to hire retired players as analysts, giving many of them a second career, which commenced the “inside baseball” discussions of what’s better: “two men in a booth or three men in a booth,” as if the audience really gave a hoot.

The networks, of course, saw sports coverage as a “cash cow” and looked for ways to entice viewers to tune in to their stations. An obvious way of doing so was to promote their announcers, and they did so brilliantly from the early days of television right up to today by ballyhooing the announcing team for days prior to an important event — as if the announcers’ calls and the analysts’ commentary would decide the outcome of a game.

For several years, major print dailies helped promote the importance of announcers by having TV sports columnists. Rudy Martzke of USA Today had a daunting presence. Any criticism by Rudy might result in a demotion, a lower peg on the depth chart. After a few years, most major newspapers discontinued these columns and gave the space to actual on-and-off the field happenings. But the promotion by the networks of its sports commentators has never ceased. Through the decades, Phil Mushnick broadened his opinion column beyond announcers and voices.

The most outlandish recent example of a network attempting to elevate the importance of an announcer occurred when NBCUniversal made a big deal that prime time host Mike Tirico would fly from the United States to Beijing, then hop a plane (first class, I assume and hope) to travel back to the U.S. for Super Bowl duties. I hope NBC let him keep his frequent flyer miles. For me, flying comfortably across the ocean, while boring, was considerably more comfortable than digging ditches, which I did during my basic training military days.

If you picked up a major print publication recently you likely saw a piece that network execs wanted you to see, announcers jumping ship and moving from one network to another network. It exalted the play-by-play role overall.

So as football fans look forward to the coming football season, there will be some significant changes that will surprise fans who didn’t keep up with the announcers playing musical networks this winter. The names will be the same for the most part and the voices will be familiar, but the call letters and of  stations will be different.

So despite the many hackneyed expressions used by sports commentators and there are dozens during each game they announce, I stand with them. Get as much money as you can while you still have a job because as soon as a network can get someone with a name to work for less money. No matter how it’s dressed, history demonstrates that you’ll be let go.

Good luck to Troy, Tony, Al, Cris, Joe, and all the other announcers who are considering or have already decided to have their commentary carried by new networks.

Get all the money you can, because there’s not a doubt in my mind that the networks would pay you the least amount of money they could, if they could. See Fox.

It seems to me that Fox moving to Burkhart and Davis is similar to when they look to Joe Buck and the other legacy announcers (Kenny Albert, Thom Brenneman) to lead Fox into sports broadcasting. Yes, there were a few old stalwarts but these young guys were the voice of Fox’s sports broadcasting and rather than pay for proven stars, they are choosing instead to once again place their hopes with the next generation of announcers.