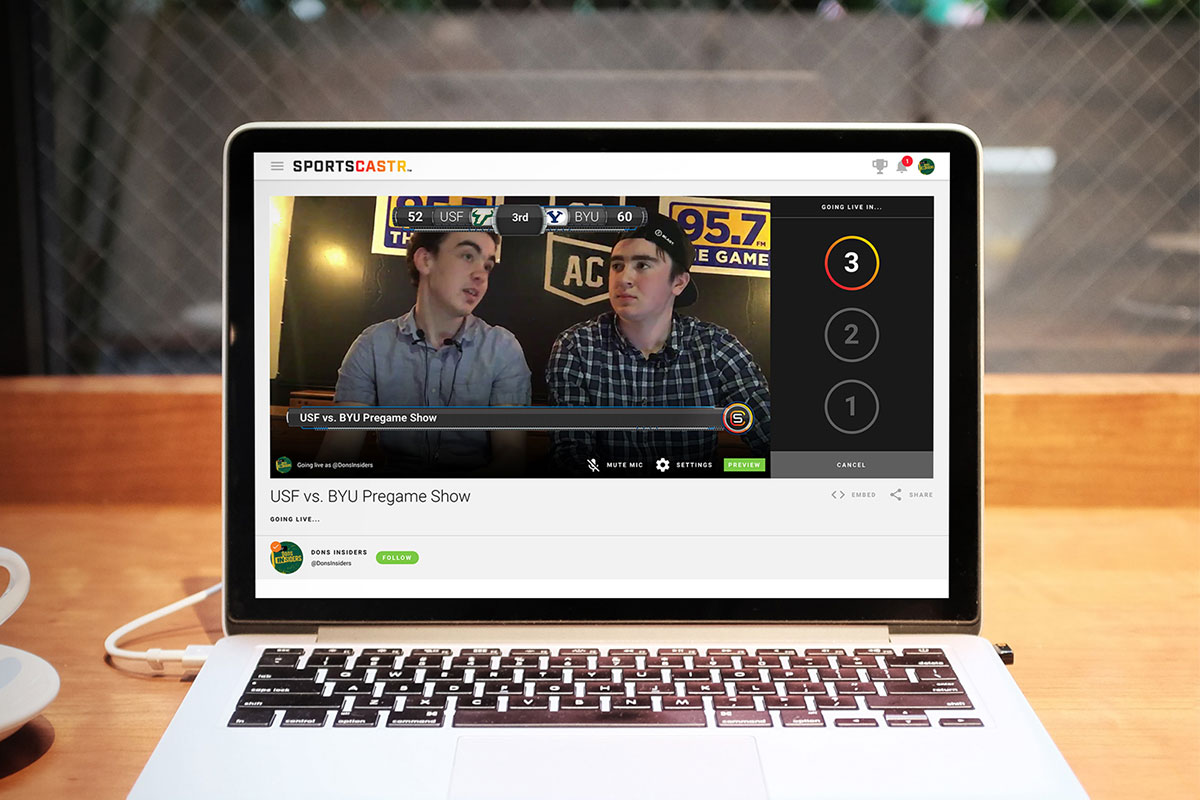 I just wish SportsCastr.com was around decades ago when I was dreaming of being a sports announcer. All I had was a cumbersome old tape recorder, a cheap handheld mic and a paucity of game notes. You’d bring the equipment to a sporting event and scream yourself weak. There was nowhere to show your wares, be graded or get feedback. You wallowed in your own directionless endeavors.

The world is different today. Students are afforded the opportunity to gain invaluable experience as early as in high school. Today , coverage of just about any sporting event is available somewhere, from basketball at the NAIA level to women’s softball at DIII schools and yes at high school games too. Announcers are needed for all these events, usually, at the outset, as volunteers. Money, no. Valuable experience, indeed! Often the viewing of these events are consumed by only friends and family. So while these streamcasts spawn unequaled reps, there’s no real visibility.

Learning to paint graphic pictures can start anywhere. The late, great play-by-play voice and announcing coach, Marty Glickman, would tell budding broadcasters to never miss an opportunity to grow their command of the language. For instance, he suggested to prospective announcers that when they walk down the street they should describe to themselves what they see and how they feel. What’s the weather like? What do the skies look like? Is there an unusual piece of architecture? How’s it built? Doing so, he would say, builds descriptive power. Find the right words, those that would paint a rich picture for the sight-deprived.

You can never start working soon enough, even if it’s a matter of sending a video of a party, a family picnic or children playing on the street. Dress it up with adlibbed audio. All these exercises will make you a better sports announcer.

While these are wonderful avenues, they’re not platforms where you can share your announcing wares or your sports expertise with an expanded audience of fans and professionals who might be impressed with your work.

When the current generation of top rung network broadcasters like Bob Costas, Jim Nantz, Al Michaels and Joe Buck were honing their skills, the internet was not even an embryo. These broadcast giants and many others had little more than the college radio station, a cassette tape-recorder or a seat in the grandstand to use for training. Years ago, any profound source for game and team information required many steps, the results of which were usually skeletal data at best. The technological sophistication today was science fiction then.

SportsCastr is very much 2019. It was launched a couple years ago and it brought with it profoundly new teaching tools formatted with a new level of turnkey convenience. The website gives budding announcers, age notwithstanding, an opportunity to broadcast games in real-time, offer commentary on matchups that are popular subjects of sports conversation or even preview events and share predictions.

Backers of the site include David Stern, arguably the greatest commissioner in pro sports history. The NFL Players Association and former basketball star Steve Smith also have a stake in the site. Recently NFL star Richard Sherman joined forces too.

The site’s homepage highlights some of the more popular video posts, that range from play-by-play to sports talk. There is no cost to the end user. From what I can see, there’s no better way for voices to get in their reps before they’re in college courses getting diligent instruction.

During this month of April, SportsCastr is running an interesting contest. The sportscaster who earns the most views for his or her streams will win a trip to Los Angeles to attend the NFL Rookie Premiere. It will be held May 16th to 19th.  The winner will have an opportunity to interview NFL rookies, get photographs and select access to Rookie Premiere events. More information on the contest is available at NFL Rookie Premiere

I was fascinated by the site for its potential, to help, encourage, stimulate and train future sports announcers. The broadcast tools provided by SportsCastr are virtually one of a studio quality setting. And if you’re wondering how you’re doing, don’t worry. You’ll be assessed by viewers, your own peers. In other words, it’s like running your own channel and getting measurable ratings.

Recently too, the site announced a partnership with Play-by-Play Camps which conduct summer training for youngsters in a dozen or so locations across the country.

I’ll bet that many of the long embarked on-air talent today wish something of this ilk was available when they put together their audition tapes.

Marty Glickman taught me the fundamentals of teaching sports broadcasters, He was like a wise old grandfather to so many. He was always explicit and constructive in his critiques. He never got mad and always had a smile for you. He left you with a pat on the back. I have worked for the past five years with Ed Ingles, another great teacher and mentor. His motto is “Never let any son of a bitch tell you that you can’t do it.” I think Marty would be fascinated by this new technology. Ed and I will forward this to all… Read more »