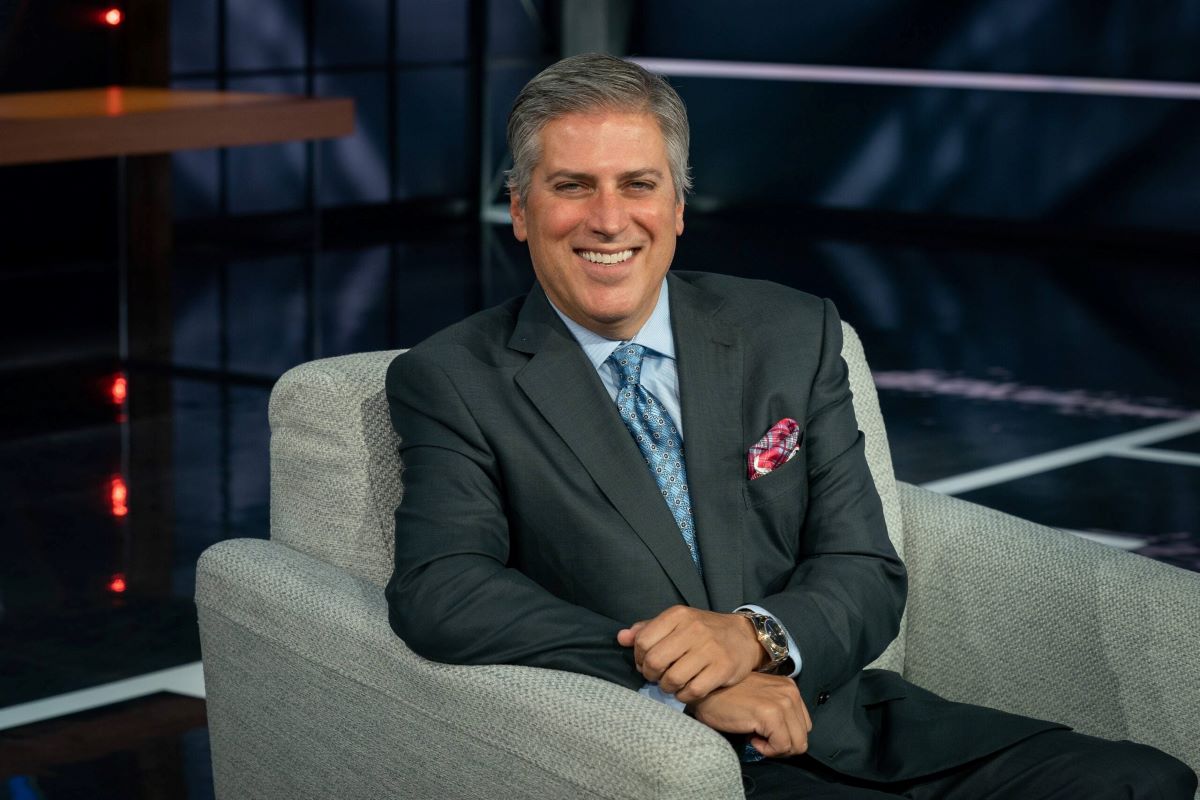 Much has been written on these pages about those who’ve roamed the halls of ESPN through the years.

Yes, the mothership has undergone dramatic changes, be they production, talent or the overall broadcast presentation. Yet it’s the steady ESPN personnel who get the attention; those who bring their lunch bags with them to the studios, the senior people, and those versatile folks who get the job done every day. They shuffle in and out without a murmur. Most bosses like it that way.

How about Steve Levy? It’s hard to believe that it’s been 28 years, since 1993, when the Long Islander and now father of three, left New York’s comfortable Channel 2 for his digs in Connecticut.

He left New York somewhat reluctantly, doing so for a shot at football and hockey, two of his passions. With the Bristolites, Levy can do it all, play-by-play or studio work, poke some fun at himself or disarm his partner whomever it might be. One thing for sure, Levy’s role fits perfectly.

He’s had the distinction of calling the longest televised Stanley Cup playoff game in history, (Pittsburgh vs Philadelphia in May of 2000). Levi is now sitting in the esteemed NFL seat of the best of Monday Night play-by-players. At 56, not bad! He’s one of the deans.

I recently had a chance to catch up with Levy as he enters the playoff home stretch. MNF, followed by a quick transition to the NHL after a short respite.

What were your thoughts as a young adult at Oswego State, down the road from a renowned journalism institution such as Syracuse University?

I was definitely aware of my surroundings. But I was not a top-notch student in high school. So I’m not confident that my parents knew what would come of me (laughs). I got the sense that my parents were able to send either my sister or me to an expensive school and that it was not going to be me. (Sister went to Tufts)

I had a pretty good sense that I’d attend a State University school and as it turned out that the choice was Oswego. Mom had this picture in her head of having me study under a tree. But with those icy winter temperatures it wasn’t likely to happen. Still, Oswego did have a great television station and a top-notch Division III hockey team.

Quite frankly, the reps I got at Oswego were my biggest advantage. I’m not sure that every kid coming out of Syracuse were afforded those opportunities as a first-year freshman. Looking back, it was one of the three best decisions I ever made. My suitemates to this day are my best friends.

You even had the media box named after you at Oswego?

I feel like I owe SUNY Oswego a lot. The school is really on the map. Think NBC’s Al Roker or colleague Linda Cohn, also a Long Islander. It might not be Syracuse’s roster but we are very proud of the SUNY Oswego broadcast roster.

Were you that guy in college who had the ultimate dream of being at ESPN and doing SportsCenter?

I’ll be honest, I was really a local sports guy. My interest in the national sporting scene was pretty limited. In New York, we had two to three professional teams in every sport. I was really focused on local and that was my aspiration. I was not a big ESPN fan back in high school. The talent in New York were made up of Warner Wolf, Len Berman and Marv Albert. They stood out.

I was the number two backup sportscaster on CBS in New York. I did work for the Knicks and Rangers. Never saw myself leaving New York. I begged Channel 2 in New York not to let me go. I was 26 and Channel 2 told me I was never going to be the lead anchor at my young age.  I would have never left the station had it kept me on board. But looking back, my second-best decisions was to leave for Bristol. Three kids are a family.

MNF seems to struck you nicely this season. It’s noticeable. Do you sense a change?

Absolutely.  We’re better. Brian Griese and I had been together for four years. Seamlessly. Blending in Louis Riddick was really hard last year because of the pandemic. We couldn’t even be in the same car to and from the stadium last year. We’re hanging out more now, eating dinner together and laughing more. it’s genuine. We give Louis the business about the size of his shoulder pads.

Take the viewers behind the curtain.  How do you plan who’ll talk from one play to the next in a 3-man booth or segueing elsewhere?

Really good question. My role is really defined, when I stop and start to speak. I have no idea what to anticipate next. That’s the magic of Griese and Riddick or whether they’ll split it up from play-by-play. I do know that our producer Phil Dean plays a role in determining who’s next but I don’t know if he’s alternating or if it’s rock, paper or scissors. I have nothing to do with it and try to get out of the way. I share the name of the tackler, down and distance. It’s amazing that we don’t step on each other more!

During commercial breaks, my spotter and statistician are feeding me something. I always want to know what we’ll address coming back from a break

MNF has always been a happening. Thought?

In 2023, ESPN will begin flex scheduling and two playoff games. Disney paid top dollar for the rights and the NFL has acknowledged what we’re doing is being done well. We’ll have the playoffs and we’re in the Super Bowl rotation. As far as I’m concerned Monday Night Football is back and I’m just happy to be in one of the seats.

How concerned are you with where things are headed from an NFL perspective with regards to Covid?

Very concerned. With the Bears and Vikings weeks ago, it was the first time we weren’t meeting directly with teams.  We’ve been very luck so far. It’s a case of being nimble and being prepared. It’s a good reminder that we’re not done with Covid and Covid’s not done with us. You’ll be transitioning pretty quickly to the NHL correct?

Yes. I’ll take off a couple weeks after the Super Bowl but on March 1st, I get back in to doing  hockey some games and also studio work.  It’s a dream calendar for me. I’ve been fortunate enough to get a lot of breaks. Very fortunate to be at ESPN with my 2 loves, football and hockey.  I’m the luckiest guy in the industry.  I recognize how fortunate I am to be where I am. (with NHL friend and partner, Barry Melrose.)

Are you concerned at all about some of the superstars in hockey taking hits, especially with teams less reliant on tough guys?

I think the league has done a pretty good job of protecting its stars. The game has evolved. I did like the rough stuff between two tough guys. The buildings become electric. The skill has never been better in the league than it is now. The other day I’m on ESPN+ and I’m looking around for live games. I see they have the ’79 Stanley Cup Finals game between the Rangers and the Canadians. After I watched it, I couldn’t believe when I flipped over to a live game and compare the two games. The speed was so different.

Presentation wise, what are your thoughts on how ESPN is making the comeback into hockey?

We’re trying some new camera angles and analytics creeping its way into the game. More statistics on the screen. NBC did a really nice job and TNT is doing a nice job as well. The ESPN advantage is the promotion and the highlights of the games. ESPN is talking about hockey at all hours. We’ve seen some dramatic goals already this season. The hockey only gets better down the stretch and we look forward to the Stanley Cup Finals.

I remember him doing the hourly updates on WFAN somewhere in the late 1980s and early 1990s. Fine voice and mind. Glad he’s doing so well.