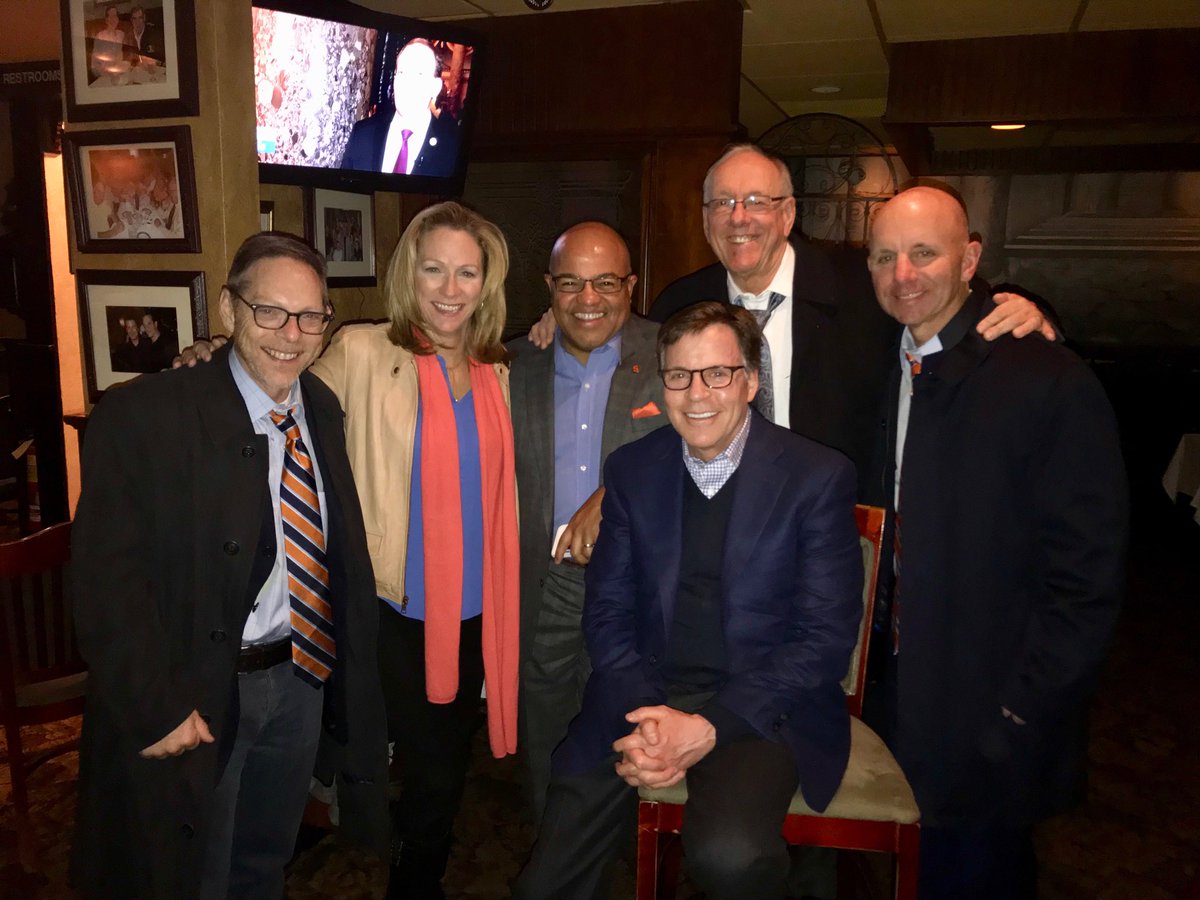 It’s a success story made in America. Super broadcast agent Sandy Montag was a young lad when he was smitten with broadcast sports. Like many New York kids, he grew up with Marv Albert, a rapid-fire basketball and hockey announcer who called games with a flair.

So when Sandy watched the Knicks at Madison Square Garden, he had one eye on the game and the other on Marv. He would mosey down to Albert’s announce position trying to get stats, scraps of paper and to otherwise gaze with awe at the doings around the broadcast table. Sandy told me last week, “I still have cassette tapes where I’m trying to sound like Marv.”

Like many other budding announcers, Sandy headed to Syracuse University’s Newhouse School of Communications. Thinking he was the only one who wanted to call games, he quickly learned differently. Montag called his dad and said, “This is great but there are about 300 other people who want to do the same thing I do. They all have the same idea.”

Quickly assessing the littered landscape of student announcers, Montag looked into his horoscope and changed course. He came to immediate grips with the fact that in years to come his voice wouldn’t bounce off television speakers like those of his Syracuse classmates. As it turned out, and he didn’t know it then, he would use his voice around negotiating tables, making announcers millionaires.

Sandy strikes me as one who seizes promising opportunities and makes the best of them; financially or otherwise. There’s the old line, “If you want more luck, take more chances.” In college, he jumped on an opening to become manager of the Syracuse football team. It is a glorified gofer position, but it gave Montag a chance to be visible around Orange sports.

As Montag tells it, “ESPN would come into Syracuse to broadcast Big East games and I would do stats for guys like Bill Raftery, Len Berman and Dick Vitale. I must have worked 100 or so broadcasts.”

Then Sandy took the next step. He got a job with People Express, a fledgling airline, long since gone. “I was able to travel for free. It was great. I went from game to game working stats all over the country,” he told me. Most importantly, he built his list of contacts.

When he got out of Syracuse in 1985, Montag went to work for CBS. He was assigned to do stats for the football broadcast team of Pat Summerall and John Madden. In time, Madden took a liking to him. The ex-Raiders coach, who didn’t fly, needed an assistant when he traveled the country by train. So Madden hired Sandy at a time when the commentator’s  popularity was swelling.

Montag had gumption. He wasn’t afraid to try new things and reach out to people he didn’t know. He started cutting corporate deals for the inimitable Madden, including developing the Madden Cruiser, which enabled the former coach to leave the rails and hit the country’s highways instead. He then cultivated sponsorship deals for Madden and would get a cut of the action. You might remember for instance that the Madden Cruiser was sponsored by Outback Steakhouse.

Madden was represented by the prestigious firm of IMG, which was founded by Mark McCormack, the progenitor of the sports agency business.  IMG was impressed with Montag’s ability to informally get things done. It hired him fulltime. By age 28, Sandy was IMG’s youngest ever vice president. Meanwhile, the larger than life Madden would tell people, “I took Montag off the streets.” Now, Montag says, “We developed a bond, a business relationship that’s still in place 30 plus years after we met.”

When Sandy stepped into IMG, he helped build the agency’s broadcast representative business. At first, he went after less known guys like Dan Bonner and eventually helped IMG build a formidable broadcast stable. He spent thirty years at IMG, during which time, in 2004, the company was bought by Forstmann-Little. It was then that Ted Forstmann  asked Montag to oversee the entire representation business; broadcasters, athletes and the like. In 2011, Forstmann passed and in 2013 the company was bought by WME.

In 2015, Sandy left the company to form the Montag Group with partners Steve Herz and Maury Gostfrand. Collectively, the group represents some of the who’s who in broadcasting including Bob Costas, Dick Vitale, Mike Tirico, Sean McDonough, Scott Van Pelt and James Brown.

What did you study at Syracuse?

We didn’t have a sport management school then. I majored in communications. Three decades later, there are 500 sport management schools including SU’s David Falk College of Sport and Human Dynamics. Yes, SU has been a spawning ground for the country’s top broadcasters. Yet, let’s not forget prominent executives too, like David Levy who’s built Turner Broadcasting including its stable of sports.

When I got out, I knew nothing about representation but I had a knack for sales, was blessed with creativity and was able to strike deals for John Madden when I was really no more than his runner. It caught the eye of IMG which hired me. It’s how I launched my career. Today the sports world is more competitive and complicated.

Who was your mentor?

I learned under Barry Frank (a longtime IMG executive, program creator and talent agent who also ran CBS Sports for a couple years in the 1970s) and Jean Sage (who headed up IMG’s broadcast group). Eventually, I had an opportunity to also work with current CBS Sports boss, Sean McManus who ran TWI, IMG’s production arm. In the late 1980s, Sean was one of the first executives to start a rights negotiation business which helped governing bodies, leagues, teams and colleges to maximize the value of their rights when selling them to broadcasters. He came over to IMG from NBC. Sean and I would have offices that flanked Barry’s. I handled representation.

When I began, times were simpler. Everything for the most part focused on over the air television. ESPN was an embryo, certainly not the 800-pound gorilla it is today. Breaking news then was consumed on either television or radio. Today, it’s online or really Twitter. Online has changed the instantaneous nature of sports, news and information.

On the video side, ESPN has so many platforms from U to 2 to 3 and more in between. It’s impossible for viewers to consume all that’s out there. Each day has just so many hours. Fox, CBS and NBC have sports cable networks and then there are the verticals; MLB Network, NFL Network and others.

Now, of course, there’s unlimited content. Radio has transformed into audio and those tentacles are endless. There’s satellite and so many podcasts. So with so much programming produced, there are more opportunities for jobs.

Tell me about the market today. How are salaries holding up?

Let’s start with the A category. It is always strong. When guys like Bob Costas, Jim Nantz, Mike Tirico and James Brown, those at the top of their crafts, become free agents and there’s a parallel opening, there would likely be multiple offers for their services. In the A category, salaries are up. Networks will take bets on top talent. Salaries have even gone up because of the proliferation of buyers (many more avenues for sports coverage).

Top sports broadcasters are likely making high seven figures. Most of the top talent at the major networks are making north of $5 million. I would say that there are six or seven of those guys.

Category B includes top-notch broadcasters, those who are really good. But as ratings decline on linear TV, salaries for the guys at this rung might be stagnant. Networks will pay the A group tons but they’ll be less willing to do so for those below. Remember, there’s lots of talent. There’s a gap; a pretty big drop in pay from category A.

The market is strong for freelancers because so many events are on some form of video. But broadcasters have to work lots of events to make a six-figure salary. A freelancer who does game #8 for a network carrying the NFL might make $10,000. College football could be $2,500 to $5,000 a game.

In many ways, it’s a glamorous market. There’s so much content but there’s an overabundance of supply. It keeps salaries down.

Some coaches or ex-players leave the field or the basketball court and expect jobs on-air. For every Tony Romo, there are 100 ex-coaches and athletes who have a hard time getting broadcast gigs. Networks have lots of choices.

How does ESPN stack up on the pay scale front?

ESPN has upwards of 600 on-air talent worldwide. They probably have dozens of people making $1 million or more and hundreds making $150,000. Their superstars, Mike Greenberg, Jay Bilas, Dick Vitale and Mike Breen make the big money. ESPN is smart about whom they pay big bucks. Not everyone will make $1 million or more. Yes, there’s a dichotomy.

Do viewers watch games because of certain announcers?

Some care. Some don’t. Some viewers are with friends or at a bar and watch with the sound off. Some do tune in because of the commentators.

Announcers don’t necessarily affect ratings. In the day of John Madden, he had the ability to keep more viewers tuned in during a blowout. They stuck with him because he kept fans engaged; perhaps he was an anomaly. Still, networks pay tons for the rights so they want the best broadcasters. They won’t and can’t take chances.

(Stay tuned for part #2 with Sandy at a later date.)

Whenever someone suggests sportscasters are overpaid, I like to remind them of Red Barber getting $200 a game for the 1952 World Series and being told he should be grateful. I also think of Lindsey Nelson thanking Ralph Mann, his agent, saying that Mann did multi-million-dollar deals left and right, and used him for batting practice.