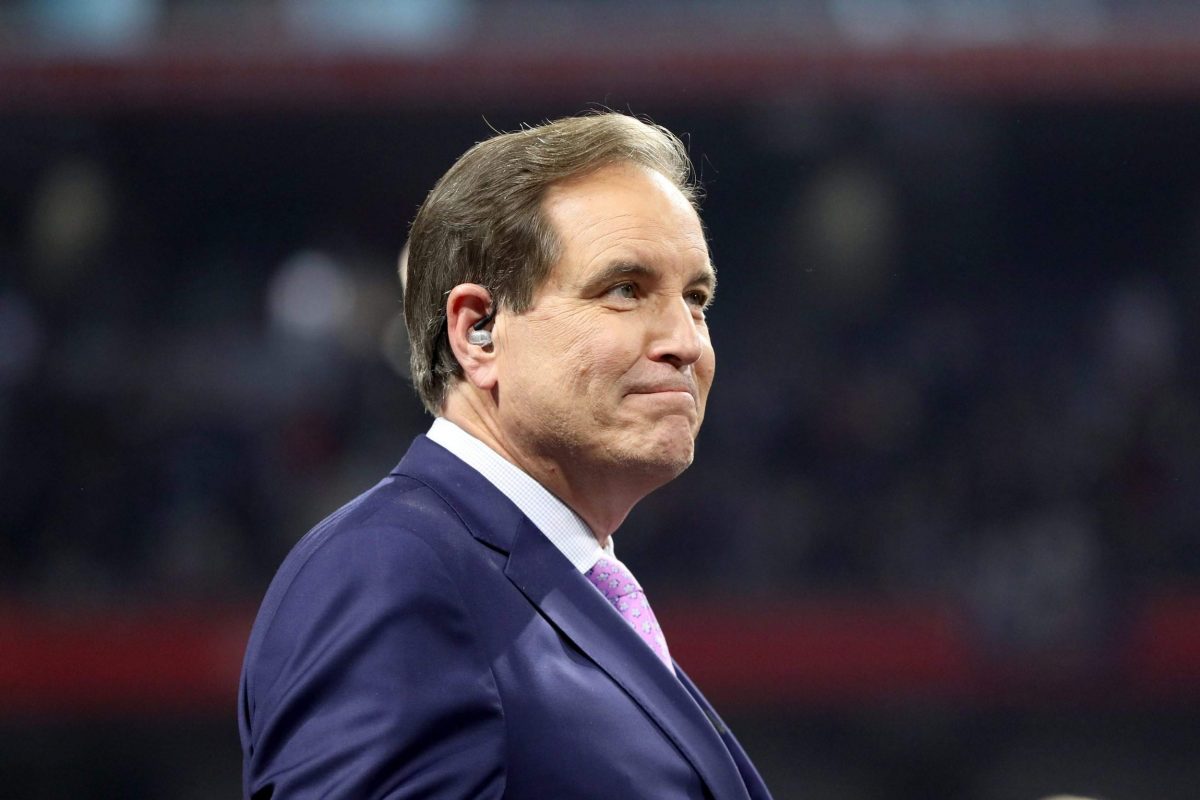 John Ourand of Sports Business Journal reported this evening that Jim Nantz and CBS have come to terms on a new contract that will begin this summer. Nantz will continue as the voice of all the network’s major broadcasts, including  the NFL, golf tournaments featured by the Masters and March Madness. Jim turns 62 on May 17th.

Next week, the New Jersey raised Nantz will preside over his 30th consecutive Final Four.

Jim’s contract talks with CBS, spearheaded by agent Sandy Montag, turned contentious and became a matter of public knowledge when it was reported that Nantz was making $6.5 million and that he was seeking ‘Tony Romo’ money, roughly $17 million per season.

America’s a great country, when sportscasters, who don’t by most accounts, influence as much a rating point when calling a game, can command seven figure contracts.

Nantz rose to the top of the heap at CBS Sports when negotiations between predecessor Brent Musburger and the network turned acrimonious. Brent’s  employment eventually ended when then president Neal Pilson announced that the network would not renew his contract. His last event for CBS was the 1990 NCAA Tournament title game. Nantz, who started at CBS in 1985, then followed Brent and has done every tournament since.

Last year, our Dan Mason asked Nantz in a one-on-one interview how he came up with his patented greeting, “Hello Friends.” Nantz said, “It was a moment I had with my father back in 2002. He was right in the middle of his battle with Alzheimer’s. I was trying everything I could to keep his mind moving. I’d play all sorts of name recognition games with him. I’d be by his bedside in Houston, telling him where I’d be that week. I’d tape my schedule to his wall and the nurses would make sure to have the broadcast on. I wanted to make sure dad was watching.

“On this one occasion, I told him that when I was at the PGA Championship in Minnesota (Hazeltine) that I was going to give him a specially coded phrase, just for him, ‘You have nothing but friends.’  And so I said ‘Hello Friends, Jim Nantz here.’ That was for my dad.”

Jim attended the University of Houston where he roomed with golfer Fred Couples. Jim himself was on the golf team at Houston. It was in college too where he got his start behind the microphone when basketball coach Guy Lewis asked him to serve as the team’s public address announcer.

Before he joined CBS, Nantz worked locally in Houston and later in Salt Lake City. He began to cover the Masters as a reporter in 1985 and was upped to anchor in 1990.

Nantz has always considered the late Jack Whitaker his idol and mentor. Jack was arguably sports broadcasting’s best essayist. Like Jim, Whitaker had a special love for golf.

Before getting the top NFL play-by-play job at CBS, Nantz anchored The NFL Today, from 1998-2003. He then changed places with Greg Gumbel who moved from the booth to the studio.

In 2019, Nantz had the pleasure and privilege to cover two unforgettable victories in rapid succession. The University of Virginia NCAA Tournament championship, after losing as a #1 seed to a #16 seed the year before. He then followed it a week later chronicling the improbable comeback by Tiger Woods winning his fifth Masters.

As for the next big play-by-play negotiation, keep your eye on Al Michaels whose NBC deal ends with the next Super Bowl which he’ll call in Los Angeles in February, 2022. ESPN then begins it broader NFL deal, the one that includes two Super Bowls on ABC.

For Michaels, I’m sure, it would be fitting to finish his NFL career where he made his mark, at ABC. If Al were to sign a four year contract with ABC/ESPN beginning in 2022, his last game could be the 2026 Super Bowl on ABC. He’d be 81. At 76, he sounds as good as he ever has.