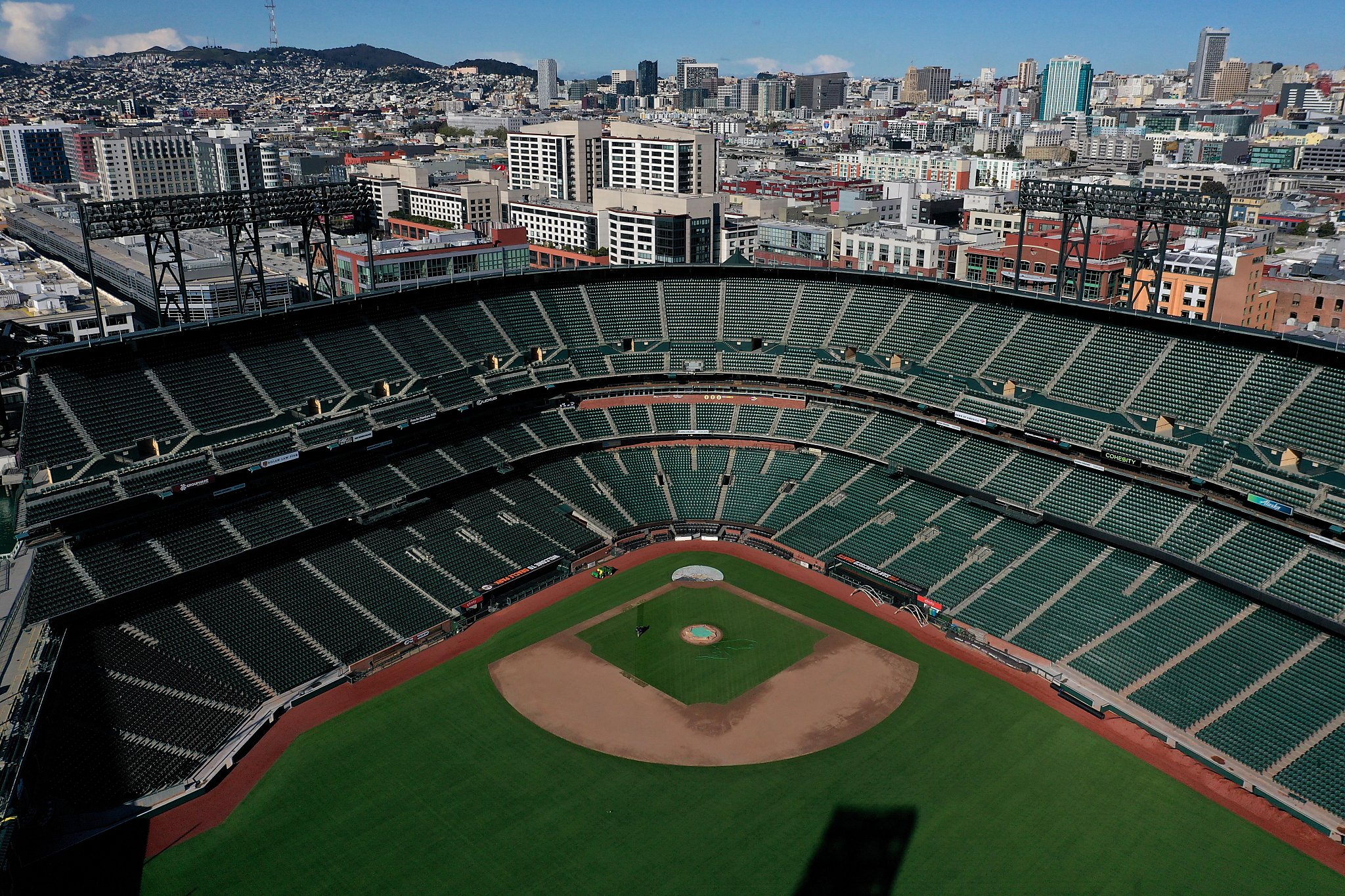 Stadiums and broadcast booths are empty as we fight covid-19. When things will open up and how are uncertain. Ideas and projections remain fluid.

For broadcasters who trace their roots through Syracuse University’s Newhouse School, the abrupt halt of the sports schedule hits home hard. Like everybody else, they’ve never experienced anything like it. Except that the seven voices with whom we interacted make a living calling baseball games.

They tell us how they’re dealing with the stoppage and the radical changes of their day to day schedule. We asked them how their jobs have been affected, how they’re spending their time and whether there’s something unique that they’re doing with their unwanted time off.

It’s been a complete stop in terms of regular games. I got home on March 10th and have been here since. We would have been weeks into the baseball season at this point and instead we’re just waiting for science.

I’ve spent most of my time either catching up with friends, working on projects that have been dormant or creating new projects. I read, I do the New York Times crossword puzzle. I’ve watched Seinfeld all the way through again.

I’ve turned to a couple things that have been important to me. First, every night for the past few weeks, I’ve been making video messages on Twitter. The messages are letters that people have sent to my DMs (direct messages) for people they care about. I am terribly sad that people have to spend this time alone, and I hope it’s bridged the gap even a tiny amount.

I’ve also created something called #SportscasterScenes, where I get other sports announcers to act out iconic moments from film and TV. So Cubs announcer Len Kasper has done Groundhog Day with me–he was fantastic as Ned Ryerson–and a few others have posted. It’s a fun way to have a good time with people who are really smart and great performers.

Well, at least for the moment, both of my jobs have been put on hiatus. At ESPN, I cover college basketball, softball and hockey – all of which have shut down. Any potential Little League and MLB work is also up in the air as of today.

I also call games for the Baltimore Orioles, and the MLB season is in jeopardy. I’m waiting for word on it as much as the rest of us.

I’ve been throwing myself into a number of things to keep me busy. I have a morning routine for the first time in my life – wake up, clean the kitchen, make a bowl of granola and yogurt, watch an episode of “The Wire” or “Better Call Saul,” do the N.Y. Times crossword, watch Governor Andrew Cuomo’s press conference and walk my dog for about an hour.

I’m speaking with lots of friends and family members, via phone calls and Zoom calls. I’ve read a couple of books, watched many movies and TV shows and rekindled my piano playing. My wife and I are cooking and/or baking every day.

It’d be easy to sit around and do little – and I have moments where I feel helpless – but I’m trying to keep my mind as active as possible to avoid that. I’ve made a bunch of videos for the “SSN”, or “Simulation Sports Network.” I simulate college basketball games – in particular, the NCAA Tournament and conference championship games – on WhatIfSports.com. Then – with the help of a dog and special guests – I shoot a fake sports report, complete with props and piano playing, and stitch together for a ridiculous video that’s part comedy, part sports. I put them on Twitter and Instagram. If I can make anyone laugh for three minutes in the midst of a global pandemic…I consider that day a success.

Oh, I’ve been very busy. I’ve cleaned our attic, shed, kitchen cabinets, closets, looking for more to clean.
Most of the last few weeks have actually been spent trying to make our kids’ lives as normal as possible. So I’ve been cooking a lot of meals and helping with home schooling. Their school days go from 8 am until 3 pm, and they are remarkably scheduled. I am much more familiar with quadratic equations than I have been in years.

In California we have been under shelter-in-place for more than a full month now. We have cooked almost all of our meals at home. That’s been fun. I have perfected making a good number of new cocktail recipes – I am going to be a fun person to hang with, once the world gets back to normal – math and cocktails.

We’ve tried to do a bunch of videos for the Giants to use on social media, just to engage our fans while we are all missing baseball. A couple days ago my three Giants broadcast partners (Krukow, Kuiper and Miller) and I were recording a public service announcement for the State of California, via a Zoom call. We were hooked up to the Governor’s office in Sacramento, and some staff members were directing us through our script.

Governor Gavin Newsom must have been walking by and heard us from the hallway, because he popped into the studio and sat down to say hi. He has been working day and night through this crisis, and has really done a tremendous job for our state with his leadership. But for a few moments he just wanted to talk some baseball! So we had an impromptu zoom with the governor, chatting about the Giants and getting his latest update on the status of this virus and our response. It gave me a chance to thank him for all he is doing.

As with anyone involved in sports, my professional life has basically come to a stop with the pause of the NHL season and the delay in the MLB season. I have been trying to keep busy cleaning my home office which was long overdue and I found many VHS tapes of old broadcasts. I am now digitizing them which will take quite a while. I’m also reading a lot and keeping tabs on the covid-19 news, although that can be daunting. My family and I watch at least a movie a day and I try to take a ride or a walk every day just to get out of the house.

NBC Sports Philly has Keith Jones and me voicing over NHL 20 Sims of Flyers’ games once a week for air. Also, I’m live tweeting during some of the rebroadcasts of Flyers’ classic games. Finally, there have been several podcasts that I’ve taken part in, including one with the Voice of the Sixers, Marc Zumoff and Voice of the Phillies Tom McCarthy which was a lot of fun.

Well, since all I do is play-by-play, with no games I haven’t worked in more than a month. My last event was the championship game of the Northeast Conference, of all things. It turns out that one of the referees in that game tested positive for covid-19 a few days later.

My job has been affected by covid-19 in the same way as everyone in the sports world. I am tremendously missing the first full month- pus of baseball, and hope to see some resolution or plan in place for the 2020 season sometime shortly.

I’ve been spending almost all of my time staying inside and practicing social distancing. My wife and I bought a house 3 months ago in Houston, so we’ve had plenty of time to complete our projects. The only time I leave the house is for an occasional round of golf.

My job has basically come to a screeching halt because of covid-19. With no sporting events being played, my work has stopped. I was scheduled to do the Final 4 for the ESPN International feed…to host the Masters Par-3 contest…and to do some Red Sox games on their radio network. I would have been a part of ESPN’s coverage of the PGA Championship, which was scheduled for mid-May. It has since been moved to August. I hope they are able to play it then.

I have been spending my time trying to get projects done, both work and household related. Been trying to get regular exercise. Staying in touch with friends and family. And, in a shocking development, even learning to cook a little bit. More than anything, this downtime has been an opportunity to focus more intently on the things that are truly important…faith, family and friends.

Not much unique going on. Mike Tirico was nice enough to organize a virtual cocktail party on Zoom for a bunch of us WAER (Syracuse college radio station) alums. There were probably 15 of us on it. It was a lot of fun. Other than that, fighting off boredom. I have rarely been bored in my life. That has not been the
case lately.

It’s so bizarre, for the first time in 30 years not to be calling Major League Baseball. As covid-19 has changed the way we live and taken sports away from us, I’m still optimistic baseball will return this year. In what form, nobody knows. Arizona? Empty stands? Perhaps.

The rhythm of the season is so unique, and for now it doesn’t exist, so if you work in baseball you’re forced to fill the time like everybody else. Last weekend, my son drove up from Georgia and I met him in Baltimore, and we drove to Gettysburg. Mike was a paratrooper in the 82nd Airborne, served in Afghanistan, and he wanted to see the battlefields. The National Parks actually remain open to drive through, one of the few things that are. So we walked the field at Pickett’s Charge, and visited Little Round Top. Just amazing, and deeply touching.