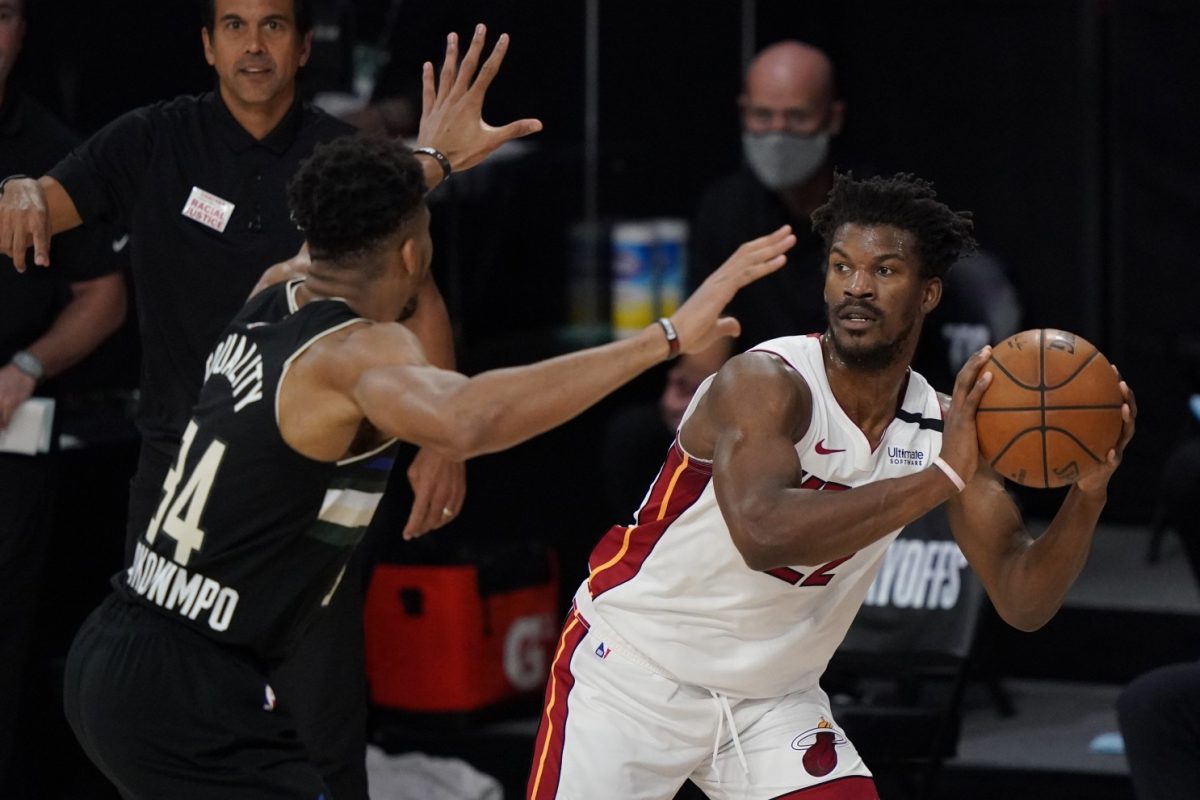 In recent months, sports and athletes have attempted to dodge COVID-19 and also actively support the  movement toward social justice. Through it all and under a cloud of uncertain times, teams have competed on the court, ice or field.

After the Bucks refused to take the floor for Game #5 against the Magic, the NBA postponed all games for three days. Later, following much internal deliberation, the players agreed to resume play. Two playoff series, the Rockets-Thunder and Nuggets-Jazz, went down to dramatic game #7s.

The players’ performances kept fans glued while social injustice fueled the fire. The talkies had a lot to say this week about a number of individual players and their on and off the court activities.

As NFL news heated up with announced signings, cuts and injuries, the college football season began this past weekend, albeit with a muted schedule. Predictions for the NFL continue to be tweaked because of roster changes. But without the benefit of a preseason to assess both teams and individual players, talkies struggled a bit to determine preseason picks.

With a lot up in the air, the talk show hosts covered it all:

Stephen A. Smith used Twitter to talk basketball with his followers, but he also covered some other topics this week. After the passing of Chadwick Boseman last Friday, Smith shared a photo he had with him and captioned it: “R.I.P. My Brother. We will miss you!”

After Game #6 of the Nuggets-Jazz game that tied the series, Smith called Jamal Murray of the Nuggets a “superstar.” Stephen also praised Murray for his post-game interview that paid tribute to George Floyd and Breonna Taylor. He made sure to remind fans that Jazz’s Donovan Mitchell is special too. He felt it was appropriate that this series went to a Game #7 with these talented guards competing.

After the OKC Thunder took Game #6 on Monday, Smith was quick to criticize the Rockets for Russell Westbrook’s turnovers and Coach Mike D’Antoni’s decision to play the last three possessions without James Harden touching the ball. He had plenty of nice things to say about the Thunder’s Chris Paul, praising him as a leader on the court, president of the NBPA and as a social justice advocate.

Yesterday, Stephen A. used his ESPN platform to call the hiring of Steve Nash as the Brooklyn Nets’ new coach, a matter of “white privilege.” Smith first heaped praise on the former NBA guard as a leader on the floor, one who mentored young players, both black and white. But he pointed out that Nash had no coaching experience and as such, dubbed his hiring as “white privilege.” It should be noted that Tyronn Lue was hired a bit later as the new coach of the Sixers.

Jason Whitlock was hit with hate on Twitter after he tweeted out his column about the Bucks’ bumpy start against the Heat and how their struggles are tied to initiating the NBA boycott. Whitlock argued that Jacob Blake who was shot and killed by police, was unworthy of the Bucks’ sympathy. In his article, he pointed to the fact that Blake is a man accused of sexually assaulting the woman who called the police. He also added that Blake wrestled with the police, admitted to having a knife and ignored the commands of the authorities. Whitlock’s main argument is that the Bucks didn’t know enough about the situation before deciding to protest, and now their heads are filled with distractions from the decision they themselves made.

Many of those who quickly chimed in on Twitter responded negatively to Jason’s take, calling his column absurd, ignorant and written solely to get attention. The issue to many was that Whitlock blames the Bucks’ performance on caring about social justice issues, while the Bucks have not performed well in the bubble since play began there in July.

One user expressed his fury: “I’m so happy you (Whitlock) got fired from national television and are left to live a life of irrelevance.” Jason was clearly unbothered, responding: “Thanks for stopping by to check in on me. Appreciate it.”

Skip Bayless is known to criticize stars of the NBA, and he stuck with that direction this week. Even after Luka Dončić’s buzzer-beater last week, Skip doesn’t see the Dallas standout as a top-five player. He let his followers know that Luka is: “Lousy from three and the FT line. Targeted on defense by opponents. Whines about every call.”

Skip predicted the Bucks to win their series against the Heat in seven games, but he reminded followers of how last year the Raptors found ways to frustrate Giannis and keep him from scoring, and it seems the Heat are doing the same. Bayless also found fault with Russell Westbrook this week because of his “out-of-control turnovers and poor shots.” Bayless was favorable toward Kevin Durant this week and pointed out that four times in his career he has made over 40% of his three-pointers. He also called Durant the “full package.” In other news, Bayless tweeted out on Monday that Lebron James’ son, Bronny, will represent an Esports gaming company.

Dianna started her week with this tweet: “Can’t believe I’m saying this after years of complaining. I miss preseason football.” She also brought her followers the news of Logan Ryan’s signing with the New York Giants. Ryan is the cornerback who played for the Patriots and Titans. She then went on to add that it’s a one-year deal that will help bring a message of accountability to the team. Russini also regrets her decision to pick the Eagles to win the NFC East after hearing they are “headed into the season limping.” Her new choice is Dallas. On Wednesday, Dianna shared her excitement for the opportunity to go to Minnesota for the upcoming week. She’s pumped about seeing Vikings’ Dalvin Cook and Adam Thielen, saying: “These two are going to explode this season.”

Ian Rapoport kept his followers up to date on team injuries and contracts in the NFL. After an announcement that Lord Hyeamang opted out of his Canadian Football League contract to pursue opportunities in the NFL, Rapoport said it was a good decision.

On the injury side, Kamal Martin of the Packers and safety Derwin James of the Chargers both underwent surgery to repair their menisci. As of now, Rapoport wrote that Kamal Martin is marked as IR/designated to return, and that James is being placed on Injury Reserve with plans to join the team next season. On Wednesday, Ian tweeted that Alvin Kamara returned to Saints’ practice on good terms with coach Sean Payton. The week prior, Kamara skipped practices over salary negotiations. Rapoport reported that the Patriots released veteran Mohamed Sanu, which surprised him. On the baseball side, Ian paid his respects to Hall of Fame pitcher Tom Seaver after his passing. Ian’s tweet: “A legend. RIP.”

Molly McGrath covered all things football this week as NFL camps continued and the college football season began amid the pandemic. On August 29th, the first college football game of the season was played between Austin Peay and Central Arkansas. The game was close during the final minutes, and Molly shared the score with a caption: “Of course, college football delivers!” Molly also commented on Ja’Marr Chase’s decision to opt-out of the LSU season, calling it a huge loss for college football. She noted that Ja’Marr has a promising career ahead of him. A source shared that the Big Ten is targeting a start to its season on October 10th. McGrath responded to this with confusion because in early August the Big Ten announced the fall season was canceled . Molly also let her followers know that she was attending Seattle’s practice on Thursday when news broke that the Seahawks were expected to re-sign wide receiver, Josh Gordon.

Colin Cowherd took this week to share a little more about life and a little less about sports, as he posted a selfie on Twitter showing five days without shaving. Colin’s show, The Herd, took a week off to gear up for football. He also shared a video on Instagram, recapping the Rockets taking Game #7 where he showed off Day #6 without a razor, mentioning that “it looks like hell.”

On Twitter, Cowherd commented on Vikings’ QB  Kirk Cousins’ quote, “If I die, I die,” in response to playing football through the pandemic, predicting that the media would remind Cousins how “dumb/wrong/selfish he is.” He also added that Cousins’ career choice may change the way he views survival with hundreds of pounds trying to tackle him. Overall, it seemed like Cowherd felt that the media would take Cousins’ comment too literally and that it should be taken figuratively.

Wonder if Stephen A. said the same absurd thing ‘white privileged’ when the Warriors hired Steve Kerr (no previous coaching experience) as their head coach? And look at what Kerr has done as coach!

You make a good point about Kerr, albeit he was a GM before he coached. I don’t think Smith would have made these comments last year. The timing now -given that social justice is in the fore- left the decision to hire Nash – open to criticism – But not long after, the Tyronn Lue appointment- quelled Smith’s earlier accusations. Tyronn replaced a white man. Smith’s a smart and accomplished guy but he’s not Howard Cosell. He’s also nimble with his wording, often saying conflicting things in the same sentence.