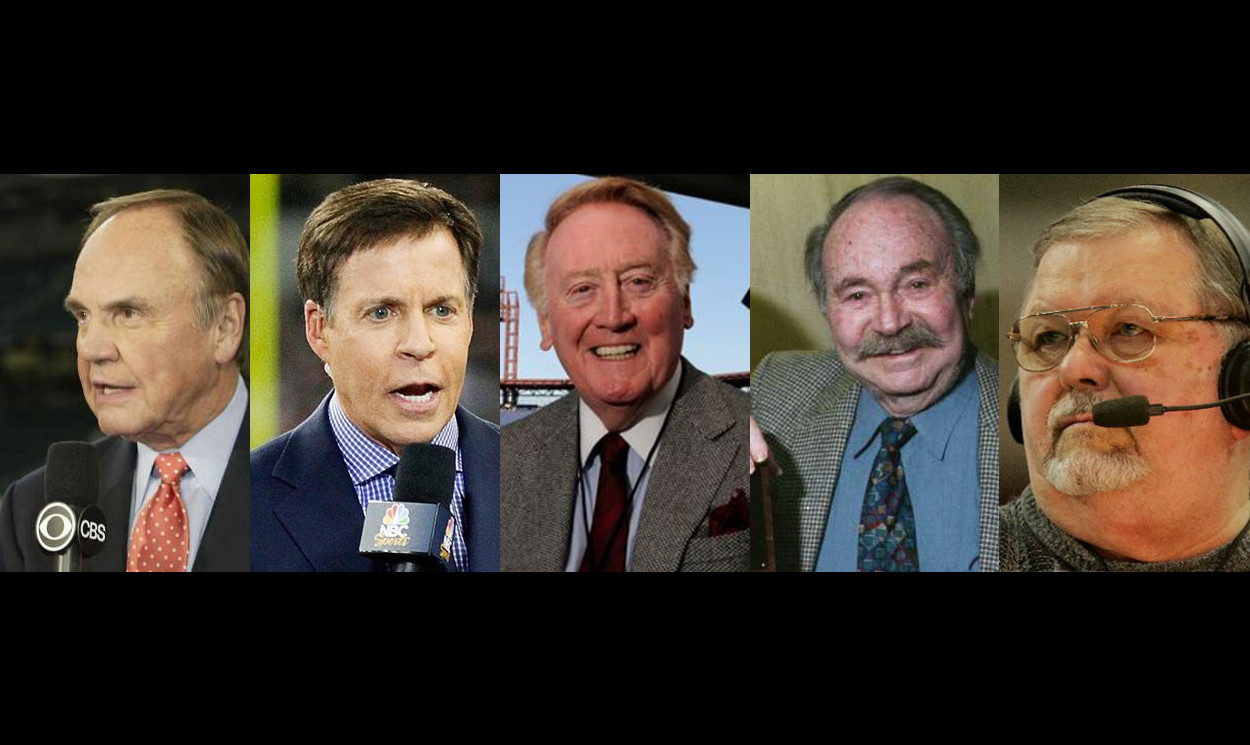 Dick Enberg, Bob Costas, Vin Scully, Marty Glickman and Joe Tait (l-r). Costas is the only one of this marvelous quintet still alive.

My mother, bless her heart, has a love for old classical music. When listening to her favorite composers, mom’s eyes well up today, as they did when I was a child. As I got older, I learned that mom’s tears are of appreciation, not sadness. Her emotions are triggered when classical compositions reach depths beyond my comprehension.

My escape was broadcast sports. Announcers took me to stadiums and arenas crosstown and across America. I developed a fondness for the art of broadcasting sports, from the basics to the nuances, to the theater of the mind.

Whether cheerfully distant or naturally warm, these five gentlemen fostered my love for the beauty of the craft. Through the last five decades, each cultivated a lasting bond; transmitting a spark of sorts that washed over me indelibly.

In alphabetical order, allow me to pay homage to each one:

Bob Costas is extraordinary at whatever he does. His mind is encyclopedic, He’s fantastically quick on the learning curve and delivers impromptu dissertations on a wide range of topics as no one in broadcast sports can do extemporaneously.

He spins humorous yarns and takes serious stands, whether on football concussions, baseball playoffs or even politics. He is never ever at a loss for the right word whether it’s a simple phrase, “Vin Scully’s broadcasts have a melody to them” or dubbing a non-reformer as an “intransigent ideologue.” This July, Bob will receive the Ford Frick Award for baseball broadcasting excellence. Cooperstown will recognize his wonderful baseball play-by-play and obliquely, his passionate work as an unofficial ambassador of the game.

The gifted Costas blends the best of the past and the present, whether Jim McKay in the studio, Jack Whitaker at the track, Bryant Gumbel doing a probing interview or Howard Cosell’s oratorical might.  Bob’s work at the Olympics will never be duplicated. His interviews regaled and informed viewers and his coverage was concise and eloquent.

The man’s legacy is overshadowed only by the good he does for others; budding broadcasters, authors and those who appreciate his kindness and counseling.

As Marty Glickman put it to me, Enberg sounds like he simultaneously smiles when he talks.

A network mainstay for so long, Dick captured human interest angles better than anyone. Whether it was tennis or football, a game show or baseball, Olympic gymnastics or the Super Bowl, Enberg put viewers in players’ cleats and sneakers. He assimilated players’ trials and tribulations with their real-time accomplishments and agony. His play-by-play was a blend of anecdotes, theater, personal profiles, poetic scripts, essays, sentiments, pedagogy and life’s lessons.

Enberg fashioned the events he covered as a microcosm of life, sounding a bit professorial but never pedantic. He was a gifted linguist. During his early years calling Angels baseball, he stamped hometown wins poetically. “The Halo Shines tonight,” he proclaimed. And of course, all those years on network television, it was, “Oh My!”

Late in his career, he said, “I’ve been so blessed in my more than 50 years of broadcasting to have the opportunity to do so many different sports. Each one is like a beautiful woman. I feel like I’ve been marching through a beauty contest all these years.”

Glickman’s sonorous voice filled rooms and cars for decades. In his sportscasting career in New York, from 1939 through the early 1990s, he was associated with just about everything. Ask him to do a marble match  and he would find a way to paint a picture on radio. When the sightless were taken to the circus, Glickman hosted them, graphically drawing word pictures for them of elephants, clowns and high wire acts.

A pioneer basketball announcer he gave the game its broadcast nomenclature and served as the first voice of the Knicks. He called Giants’ games in the days when home games were blacked out and hosted pre and post game shows for the Brooklyn Dodgers and later the Yankees. Saturday mornings, he did local high school football games with the same zeal as an NFL playoff game. His star pupil was Marv Albert and he coached Bob Costas. He had his fingerprints on Frank Gifford, Johnny Most, Jim Gordon and so many others.Tens of other successful sportscasters felt part of his extended family.

He would sprinkle words like torpid into his broadcasts when a team was lethargic or phlegmatic when a player had a lifeless look. These were not scripted words. He was just well read.

When they say, “He put you on the 50 yard line,” they’re referring to Marty Glickman.

Scully is a once in a century broadcaster whose interest in broadcasting took root when he was a kid growing up in Manhattan’s Washington Heights. He would crawl under the family’s oversized four-legged radio to listen to college football broadcasts from faraway places. It was the roar of the crowd that gave him the goosebumps.

The New York baseball teams banned radio for fear that it would weaken attendance. It wasn’t until 1939 when Scully was 11 that the big city had daily baseball on radio. It was then that Red Barber and Mel Allen brought their southern drawls to the New York microphones.

Scully was a prodigy. At 22, he joined Barber on Brooklyn Dodgers’ broadcasts and at 25, he was with Mel Allen on NBC’s World Series coverage. His reputation swelled across the baseball world, particularly after the Dodgers moved west. He is undeniably baseball’s best announcer ever after a 67 year stellar career that ended in 2016.

As a play-by-play announcer he had every quality imaginable; charm, eloquence, the perfect word and phrase for every possible occasion (“Gibson is using the bat as a cane.”), graphic descriptive powers (“The tall righthander looks like 6 o’clock on the mound.”), the art of proper pausing, a mastery of delivering punchlines, a keen eye for baseball, disciplined preparation, warmth on air, a sense of history, a storyteller galore, the restraint to keep quiet  to defer to the roar of the crowd and an unparalleled ability to punctuate the big occasion with the perfect caption (“In the year of the improbable, the impossible has happened.”).

In his years doing the World Series on national radio, I sat with a notebook, transcribing his phrases and marveling over his brilliance. It sounded so natural but the only one who could do it immaculately was Scully. I can’t imagine that anyone in the foreseeable future will ever reach Scully’s stature.

Joe Tait was a regional phenom who paled in visibility to others on the national stage. Yet to fans in Northern Ohio and to all budding broadcasters that he influenced nationally, he was an absolute giant. From the 1970s until he retired in 2011, Joe Tait was a basketball announcer’s basketball announcer.  He called games with consistent and glistening accuracy. If the radio play-by-play announcer’s job is to connect the dots, no one did it better. He was flawless; rhythmically graphic and never missed a pass. Through Cleveland’s 50,000 watt powerhouse, his Cavs’ broadcasts were heard on most nights from the Rockies to Brooklyn.  I wasn’t the only one he touched. There were many others, including broadcasters Al Albert and Kevin Harlan.

Basketball is a game of repetitive moves and Tait found a thousand fresh ways to describe the same sequence. He had the time-in-grade, a dedication to the NBA and was duly honored by the Naismith Hall of Fame with the Curt Gowdy Award for excellence in broadcasting.

We each have our guy. Mike Emrick talks about the longtime Voice of the Ft. Wayne Comets, Bob Chase, who influenced him. Tait is mine and many others too. There should be a picture of Joe Tait, near the old line that reads, “seeing it on the radio!”

We all have artists we lionize. For mom it’s classical composers, for me it’s sports broadcasters. Art is art, for some it’s sheet music, for others it’s a microphone. Under the right mood and setting, the work of the great ones can evoke a tear of appreciation, no matter the discipline.

I heard about Joe Tait when I was in middle school and was able to listen while in college and get to meet him a couple of times…he was great!

David…a great piece on 5 icons in our business. But, I’m elated that you recognized Joe Tait among that group. Joe was partially responsible for my career in broadcasting. In what is to long a story to tell here, Joe and I were thrown together to do the Illinois high school state basketball tournament finals in Champaign…he an already accomplished play-by-play man and me in my first year of the profession. He was great and I was learning. 2 years later he hired me to take his place in Terre Haute, IN, when he became the voice of the Cleveland… Read more »

As a play-by-play broadcaster in Upstate New York, I was able to listen my home team broadcaster Joe Tait many-a-night on 3WE. I listened so often I began to mimic some of his calls —“to the line, to the lane” and for a three point shot, “the three ball.” But no one could, as you said, connect the dots like Joe. He was brilliant, but I don’t think he ever realized how good he was and how much he meant to his thousands of fans throughout the country.

YES to Joe Tait. WWWE also went South. Came in loud and clear in Charlotte, NC. In my opinion, there is no “one” best. There are a list of the greats. And Joe Tait is on the list.