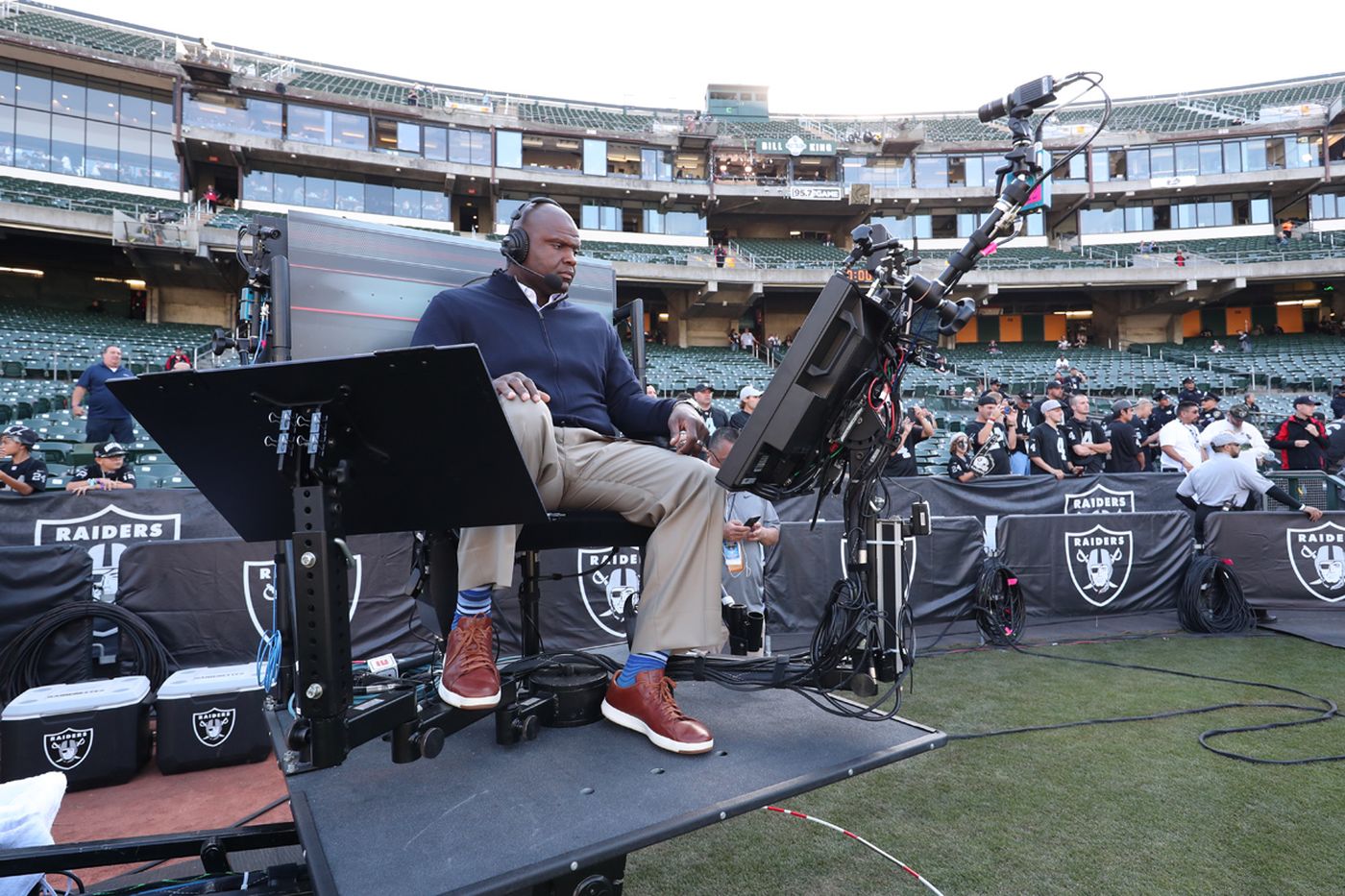 Booger McFarland elevated from his awkward cart to the booth. A defacto promotion

For this weekend’s schedules (10-3-10-7), geographic clearances and talent, click here for NFL:NFL Week #5: CBS and Fox regional geography; Schedules for the 4 networks; and full list of announcers

For this weekend’s (10.3-10.5) full college schedule, announcers and networks, click here: College football Week #6 – ESPN, Fox, NBC, CBS and Others: ALL times and ALL Announcers

SCHEDULE BELOW, FOLLOWING COMMENTS ON THE NETWORKS’ LEAD ANNOUNCE TEAMS

The diverse John Tessitore, 48, has a discernible style, different in cadence from his network counterparts. His voice is hollow and his uneven calls don’t follow any rhyme or consistency, rather the instincts dictated by his stream of consciousness. Joe’s his own man at the pulpit. He eschews conventional training scripts that are taught in broadcast schools.

His popular work on college football earned him the coveted gig as ESPN’s NFL lead play-by-play voice. But his first year performance last season was met with mixed reviews. It struck others and me that he spent the season trying to fine tune his wallowing style. Joe’s different, so I’m rooting for him. He’ll get it.

Jason Witten, his prime analyst is headed back to the Cowboys’ playing field. So it appears that Booger McFarland has been liberated from that awkward mobile cart he used last season and will be elevated to the booth. McFarland, 41, showed signs last season in his science-fiction and confining role. The 2019 ESPN telecasts will be a big test for him. Unless ESPN can land a big third name, Booger and Tessitore will remain only a duo.

Jim Nantz experienced a network announcer’s dream of dreams. In rapid succession earlier this month, he called two emotionally uplifting events, first when Virginia captured the NCAA Tournament, a year after being the first number one seed to lose to a 16 seed. Then, of course, Tiger Woods captured the hearts of millions at the Masters.

This fall, Nantz, who turns 60 on May 17th, settles into the CBS booth with the hottest commentator in television sports, Tony Romo, who turned 39 this past Saturday.

Few thought that another John Madden would come along in our generation. Romo did. He’s demonstrated a breathtaking ability to project plays. The former Dallas quarterback has a warm personality, a sense of humor and a comfortable chemistry with his partner

Nantz, a thirty plus year CBS vet brings a soft tempo to his microphone, an easy-going demeanor and recognizes Romo’s strengths. Accordingly, he gives his partner the necessary runway and space to do his special thing. Nantz can be distinguished in one way, no matter the sport he covers. He sprinkles in human interest angles that fit the moment and achievement.

Romo is demanding astronomicaly big dough to hang around CBS, so we’ll see what eventuates. Next Super Bowl on CBS will be in 2021 in Tampa.

Other than Tony Romo, 10 ‘Wow’ like network TV voices; loved, hated or tolerated; some at the same time

What can you say? Joe Buck, 50, has an immediately identifiable sound and style. He also has an uncanny ability to call a play and then get out of the way of it with lightning speed. In a heartbeat, he constructs a sentence that summarizes the result of what just happened and what’s to come next. The phrasing sets up his analyst, Mr. No Nonsense, Troy Aikman, to either review or preview. Buck reminds me of his late father Jack. “Fly ball. This one WILL be caught in left field.” Like Jack, Joe makes plausible assumptions. Joe and Jack have a distinction. Both have called a World Series and Super Bowl on network television.

At first, Joe was an acquired taste. By now, he’s very well respected and liked. Aikman, 52, never lacks for preparation or candidness.  Interestingly, Aikman and Collinsworth worked together with Buck in a three man booth years ago. In his fantastic autobiography, Lucky Bastard, Joe says that while Aikman is a frank analyst who reacts to what the game delivers, Collinsworth’s comments can be somewhat scripted so that he can leave an indelible remark on the broadcast.

This February 2nd, Buck and Aikman will call the 2020 Super Bowl which will be played in Miami.

Al Michaels, 74, and Cris Collinsworth, 60, return to the booth. When NBC’s SNF kicked off in 2006, John Madden was Al’s analyst. The ex-coach served with Michaels for three seasons after which, Collinsworth succeeded him.

Michaels has been the dominant play-by-play voice of pro football for thirty plus years. He built his reputation quickly when he got the ABC Monday Night Football gig in 1986. Al is non-intrusive and dependably informative; facts, figures and heft. When merited, he captions the action with an upsurge of  enthusiasm and perceptible vigor. He never puts himself ahead of the game. Michaels won a long overdue Rozelle Award from the Pro Football Hall of Fame in 2013.

Collinsworth began his broadcast career locally in Cincinnati after an eight year standout career with the Bengals. His dad, Abe Collinsworth, played on the 1958 Kentucky national basketball championship team. Behind the mic, Collinsworth  is like the giddy kid in the toy shop. He loves what he sees on the field and his enthusiasm can be contagious.

SNF has been the number one ranked network show in prime time for the past eight television seasons. NBC’s next Super Bowl will be in Michaels’ hometown of Los Angeles in 2022.

A flexible scheduling move would be announced at least 12 days before the game. For Week 17, the Sunday night game will be announced no later than six days prior to December 29. The schedule does not list a Sunday night game in Week 17, but an afternoon game with playoff implications will be moved to that time slot. Flexible scheduling ensures quality matchups in all Sunday time slots in those weeks, and gives “surprise” teams a chance to play their way into prime time.

SiriusXM will have all NFL broadcasts, those produced nationally by Westwood One and the home and local versions too.