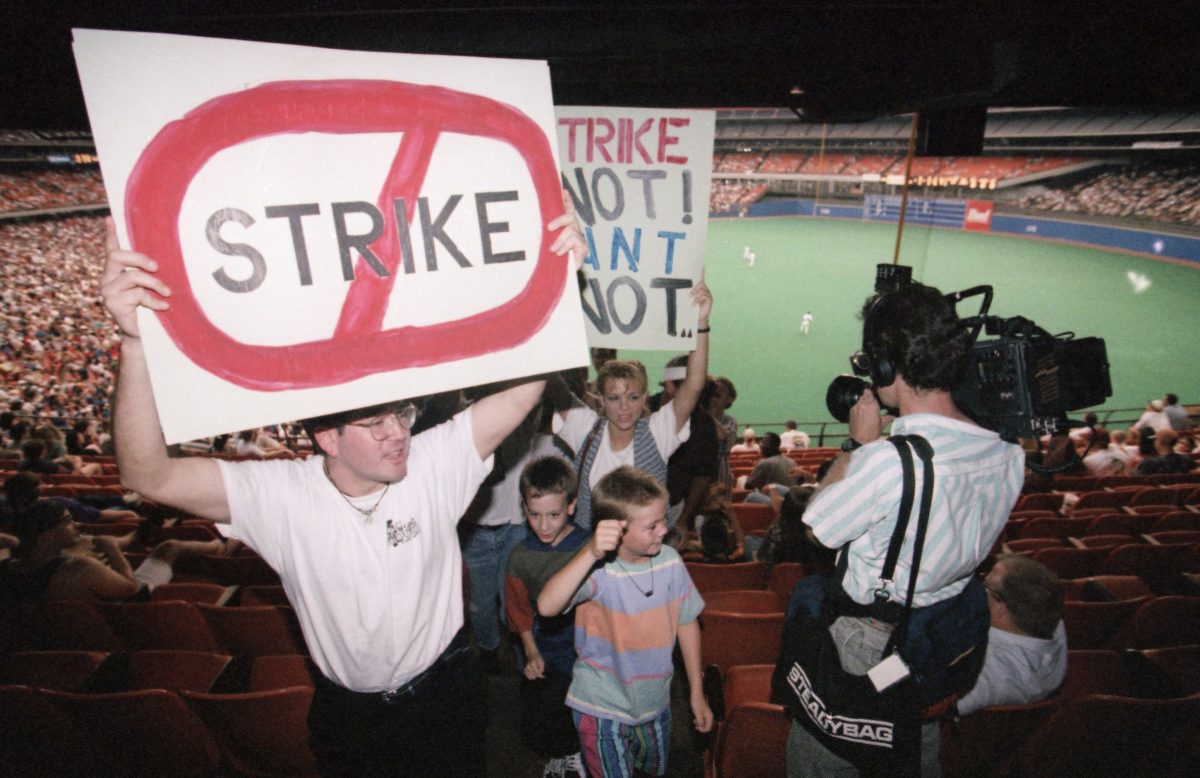 The 1994 Strike - No one was happy, not the fans, the players, the owners or the networks

It’s been 25 years since the World Series was cancelled. To millions it was unthinkable. They felt empty and abandoned.

So much has happened since that it’s easy to forget the gut-wrenching October of 1994. For a moment, let’s juxtapose today versus yesterday.

Most would agree that there have been two life changing events the last quarter century, one striking and tragic the other helpful and at times insidious. The effect of the 2001 terrorist attack on 9/11 manifests itself regularly. From a narrow sports lens, entering stadiums freely ended abruptly. Ballpark security lines are a constant reminder of what rattled our country 18 years ago.

The advent of email, the internet and social media have revolutionized the way we interact, consume information and assess others. In our hurried world, we’re more impetuous and less circumspect. Sports figures including broadcasters are targets of rushes to judgment. They’re lynched regularly on social media.

Empowered by the Gods of analytics, technology today has brought intuition to its knees. But there’s an irony. In a world that’s grown faster and more impatient, baseball games are more lumbering and ponderous.

Go back to 1995. In the first World Series after the stoppage, game one took 2 hours and 37 minutes. Greg Maddux went the distance in a 3-2 Braves win. Orel Hershiser started and three relievers followed for the Indians. Five pitchers were used between the two teams.

In 2018, game one went 3:52. And for those who might have forgotten, let me remind you that the Red Sox and Dodgers together used 12 pitchers in a 9 inning game.

Baseball has had its shares of labor disputes but only three times have regular season or post season games been shortened or cancelled by work stoppages. In 1972, 86 games were lost over 13 days. In 1981, 712 games were cancelled through 50 days and the most punishing of course was the one that stretched from August 12, 1994 to the eve of the ’95 season, delaying its start until April 25th and shortening each team’s schedule to 144 games.

In a two-parter, we asked broadcasters for their recollections of that forgettable October twenty five years ago. Today, we’ll focus on those who spent times doing games nationally.

I was no different from any other baseball fan. I thought there would be no way the post season would be wiped out. It was stunning. I think players underestimated the resolve of the owners and both sides underestimated how turned off fans would be. The rise of the Yankees in ‘96 and the home run chase of ‘98 brought most back. It’s long gone in the rear-view mirror now.

The whole debacle, the repeated labor strife itself, the lost World Series, the talk of replacement players, and the delay of the start of the next season hurt the game quite a bit.

Attendance was down markedly, and a feeling of fan alienation was palpable. This wasn’t a blip, it was a huge bump in the road, and set the game off course.

As for my personal feeling about the loss of the World Series, I thought all of that was very much secondary. Of course it would have been better for NBC to get an entire Series one year, and ABC the next. But the networks and announcers were collateral damage. We wound up splitting the ‘95 Series with ABC. Al Michaels, Tim McCarver and Jim Palmer did games 1,4, and 5. And Joe Morgan, Bob Uecker and I did 2, 3 and 6.

Game 6 in Atlanta turned out to be the clincher for the Braves. I felt bad for Al, Tim and Jim. They were in Atlanta standing by for a Game 7 that never happened. They made the trip for nothing. Although I am sure Al made certain they stayed at the Ritz Carlton in Buckhead. So at least there is that.

To be honest, I don’t remember much about how I felt in ‘94, other than being really disappointed in both sides that they could ever let it get to that point.  What I have thought about since, is the lasting damage it did to MLB, particularly in Canada. It basically killed baseball in Montreal. And Toronto hasn’t been the same since. The Blue Jays won the World Series both years I did it, 1992 and ’93. They regularly played to sellout crowds in SkyDome. It was always exciting to go there to watch those exciting teams in a great environment. The team and the fan support, haven’t been close to that since.

It took a while for baseball to come back. It took some teams longer than others. I do remember the empty seats during the next post season in places like Cincinnati and Atlanta.

But from a broadcast standpoint, the cancellation set up a bizarre World Series schedule in 1995. After CBS lost the rights at the end of the 1993 season, baseball brought the package in house under the management of The Baseball Network. It lasted just two years. ABC and NBC would split the two Series, each getting one. NBC was to have the cancelled ’94 Series and in ’95, we were going to do it on ABC. So someone had the bright idea to split the same ’95 Series between the two networks. ABC won a coin flip for game 7.

So the Braves led 3 games to two and games six and seven were in Atlanta. Bob Costas and his NBC team did game 6 and we at ABC made the trip in the event that there would be a game seven. Well, Atlanta won and that was it.

The next morning, I head for the airport down Interstate #75. We pass Fulton County Stadium where game #7 would have been played that night and I’m thinking what if? A few short minutes later, I see the construction site for Turner Field which was being built for among other things the 1996 Olympics. ABC was outbid for the Olympics by NBC. Had we won the rights, I would have hosted the Olympics. So not a good day for me, two punishing reminders of what could have been.

The ridiculous decree back then was that each network would promote only its games, not the other network’s. So the rascal in me got around it without mentioning NBC. I said something like, ‘If you’re wondering where you can catch tomorrow’s game, I can tell you that Bob Costas was spotted somewhere in Underground Atlanta.’ Bob did something similar on his NBC telecast.

I remember being shocked and outraged when the World Series was cancelled in ‘94. The owners had provoked that strike as part of their strategy of busting the union. The players’ reps were so smug and generally unlovable, it made it hard to feel sympathy for them either.

The only positive in the whole thing was that the damage to the game was so huge it created a compelling need to bring an era of peace and harmony to the process. Commissioner (Bud) Selig was able to pull that off. I think it was the single greatest legacy of his time in office, helping to bring about an unparalleled era of prosperity to MLB.

Having grown up with baseball it was depressing not having a World Series. I was doing the A’s in ‘94. They were mediocre at best. What really was bad was the fact the ‘95 season was delayed by the same strike. Not a good time for the pastime.

Gary Thorne (Did play-by-play nationally for ABC, NBC and ESPN)

Then and now I hurt for what might have been for the Expos and that franchise. Their fans took a blow to the solar plexus that endures.

The strike left the fans knowing, then and now, that the business of MLB leaves them secondary to money and internal ownership power struggles.

A sad but all too true legacy of a strike that left a giant scar.

It’s good to hear from them about this, and I think they left out something else that helped bring people back: Cal Ripken, Jr., breaking Lou Gehrig’s record.

The Vin would have done that World Series on CBS Radio, too.

I also wish to honor Bob Costas, who gets both a lot of praise and a lot of criticism, including from me! In the end, he came back to baseball. He didn’t have to. There was more money elsewhere, but, as with Al Michaels, he has made plenty and always said it was his favorite sport, so, good for him.

I recall that during the strike, the FAN presented recordings of memorable games past such ones called by Red Barber or Mel Allen, or the 1951 Dodgers – Giants (Bobby Thomson HR) off of the Liberty Network, which I think was national, since the Russ Hodges NY radio version was not recorded. The actual call by Russ (the Giants win the pennant!) was taped by a Dodgers fan from this own radio and he wanted to send the tape to Hodges and rub it in the hated announcer’s face, but in the spirit of good sportsmanship sent the tape anyway… Read more »