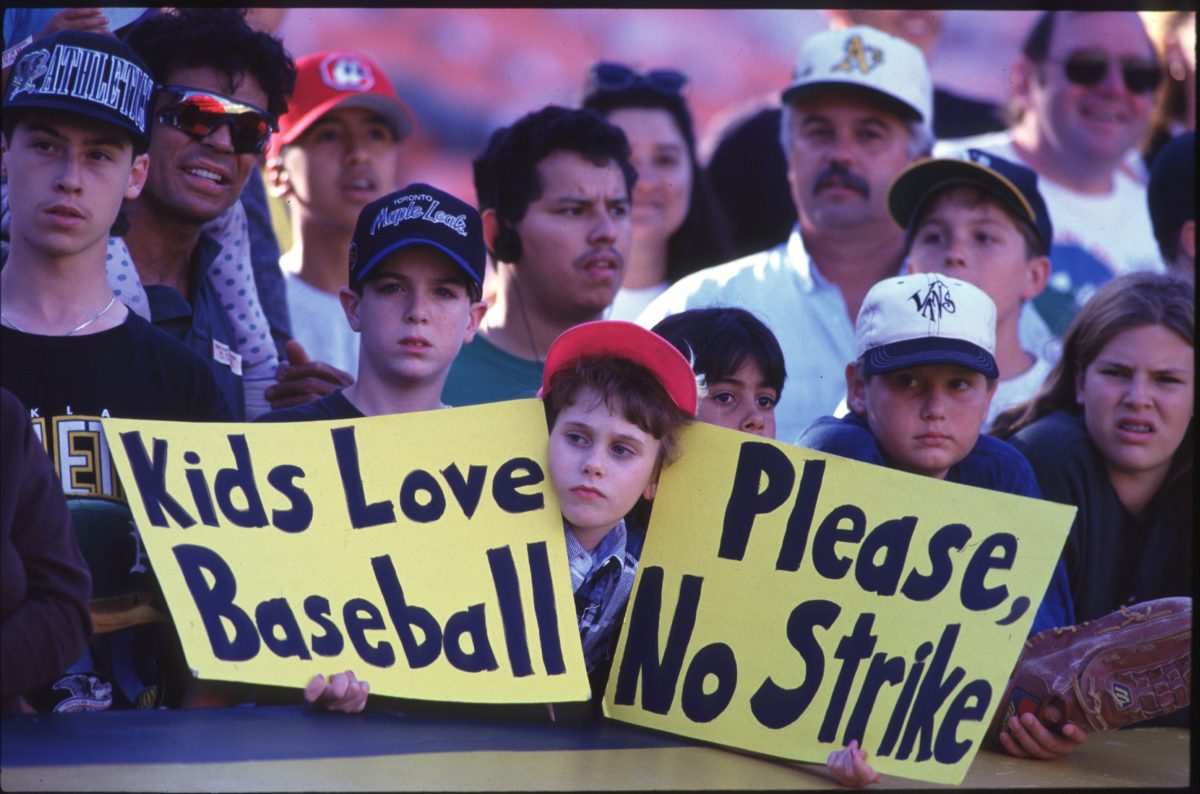 For Major League Baseball 25 years ago, it was indeed a dark October. The cancellation of the 1994 World Series was dispiriting and damaging. The players and owners were at odds, both intransigent, both unwilling to yield. There were many losers, including fans, sponsors and networks.

It was the baseball’s longest work stoppage ever, one that extended from August 12th through the start of the 1995 season, one truncated from 162 games to just 144.

Yesterday, you had an opportunity to read the remembrances of the network baseball announcers, including NBC’s Bob Costas and then ABC’s Al Michaels.

Today, we present the reminiscences of key team announcers who suffered through the cancellation of games. You’ll note that a few voices reference the terrible effect the work stoppage had on Montreal. As such, we’ll begin the commentaries with Dave Van Horne who just completed his 51st season as a Big League announcer. Dave served as the original voice of the Montreal Expos.

Dave paints a detailed picture of how the Expos were essentially crippled by the loss of games.

The 1994 Expos were the best Montreal team in franchise team history that did not include the names Carter, Dawson, Raines, Rogers or Wallach. They were, by definition, a terrific TEAM.

Larry Walker, Moises Alou and Darrin Fletcher along with Ken Hill were the leaders, and of course, Felipe Alou. Felipe had just come into his own as one of MLB’s top managers of players, and of games.

By the end of May that season, they’d really come together as a team and then won 19 of 27 in June and pulled to within a game and a half of the first place Braves.  At the All Star break, they led the East and the Braves. Then, they lost 4 straight after the break before getting back on track by winning 14 of 15.

Attendance started to build by mid June and MIGHT have reached 2 million fans, IF….

The talk of a possible strike did not deter the team. Felipe saw to it that the players remained focused and prepared every day.

From July 18th to the day the strike began, the Expos won 20 of 23 games and led the Braves by 6 games in the standings. The team was 74-40 through August 11th, the last day of MLB play. They had the best record in the Big Leagues.

All during the summer, the drive to build a workable, retractable roofed, downtown ballpark, seating about 39,000 was well underway. The strike killed that initiative, and the hopes of the team playing in a World Series.

It was a devastating blow to the team and the fans and sealed the fate of a franchise that had struggled to win and draw fans to the stadium since the mid ’80s. It was the last hurrah.

The cancellation of the remainder of the season and post season, in the view of many, and the subsequent infamous fire sale in the spring of 1995, plunged a dagger into the hearts of Montreal fans, team corporate support and media support. The franchise was beyond saving in Montreal.

From here, in alphabetical order, these popular voices share their feelings, assess what happened and how it affected baseball.

There’s no question it set the game back but, over the years, fans came back and the ones who didn’t have been replaced by new fans. The fact that the World Series was cancelled was shocking. However, I’d been around long enough that it didn’t blow me away. It was all about the almighty dollar and in 25 years, I don’t believe a whole lot has changed.

I remember the day that Bud Selig made the announcement. It was heartbreaking. Those were some tough times. No World Series that fall hurt the game. Then in 1998, the number of home runs ballooned and records fell. Some thought the ball was juiced to energize the fans. As it turned out, it was the players who were juiced. So baseball had to contend with steroids.

You can say that it ended the Expos days in Montreal and it hurt Toronto too. The Blue Jays haven’t been the same since. The ’81 stoppage was crushing and ’94 was devastating. The Yanks were coming back and lots of momentum stopped cold.

My contract with the station stipulated that I wouldn’t be paid in the event of a stoppage. When I asked management later, I was told that the salespeople weren’t paid their commission on the ads that didn’t run so I wouldn’t be paid because I didn’t call the games.

It was a terrible feeling. You had no idea how long the disagreement would last. We went through it all the following winter without knowing when the season would begin. I had two young ones at home and told them that daddy might have to get another job. My five year old Janell ran into her room and brought out her piggy-bank with like $8 in it. She said ‘Dad, you can have my money.’  Janell is now 30 and she’s the graphic artist for my CD series on legendary baseball announcers.

I was fortunate, Bud Selig, the Brewers’ owner, promised us a paycheck throughout the strike. I won’t forget it.

During the 1995 World Series, I can recall listening to Bob Costas broadcast the Indians-Braves Series. Atlanta hadn’t filled the park. Bob said that some cities were still in the process of recovering from the strike.

I do believe that the home run chase in 1998 helped baseball gets back some of its luster, at least at the time. I saw it n Chicago, following Sammy Sosa and saw what it meant to fans in St. Louis when Mark McGwire broke Roger Maris’ 61 home run record.

It will always be an awkward footnote when addressing any historical anecdote.

I felt badly for so many people, especially folks like ticket takers and concessionaires and others who relied on the game for their income. It was a real setback. Obviously the Expos were affected as much if not more than any other team.  It probably led to their demise and the subsequent move to D.C.—especially since they had such a special array of talent who could have won the Series.

I was working weekends for the White Sox that season with the deadline looming on July 24th, I remember getting ready  at Jacobs Field when the Sox were 20 games over .500 and had a one game lead over Cleveland. It was going to be the most important game I broadcast to that point. But I also started thinking that the game could mean nothing if a stoppage hits. It did.

What saved the game was finally getting back to playing, although late, in ‘95. But that said, a segment of the fandom and for good reason, developed a cynicism,  a wound that took years to heal.  It was hard for the working person—the folks who spend well-earned money—to relate to how the sides couldn’t come together. Hard to blame them one bit for feeling that way.

Duane Kuiper (He’s been with the Giants since 1986, other than in 1993 when he called Colorado games)

After winning 103 games in 1993 and not making the post season, the 1994 season was supposed to be the year they were going to get to the playoffs. Matt Williams was on pace to break Roger Maris single-season home run record. The franchise was definitely on an upswing and the strike and the cancellation of the World Series just crushed them and the Giant’s fan base. It took them two full seasons to bounce back! Bud Selig and the players association should be applauded for not allowing this to happen since then. The cancellation of a World Series should never ever happen again. And the powers that be need to make sure that it never ever happens again.

Eric Nadel (Eric’s been with Texas since 1979, mostly as the primary radio voice and also did some TV)

The Rangers moved into a new ballpark in 1994 and were averaging close to 40,000 fans a game when the strike came. They were also in first place in their division, albeit 10 games under .500. Things could not have been better. The strike killed a large part of that good feeling and I felt that a great opportunity for the franchise had been lost.  When play resumed in 1995, attendance fell back to under 28,000 per game, equal to what it was in the old stadium.  Fortunately, the 1996 Rangers recaptured a large part of the fan base by winning the club’s first division title, averaging over 35,000.

Howie Rose (Has been a part of the Mets broadcast team since 1996, first on television and then on radio)

I’m not sure that baseball has ever fully recovered from the 1994 strike. From the steroids era to today’s ridiculously altered ball, it seems that there’s always been some artificially designed effort to create interest in a game that used to be self-sufficient. This game would sell better if it was a bit more organic. I might have felt a void in the fall of 1994, but ask the great fans of Montreal how they felt. The strike and its aftermath cost them their team.