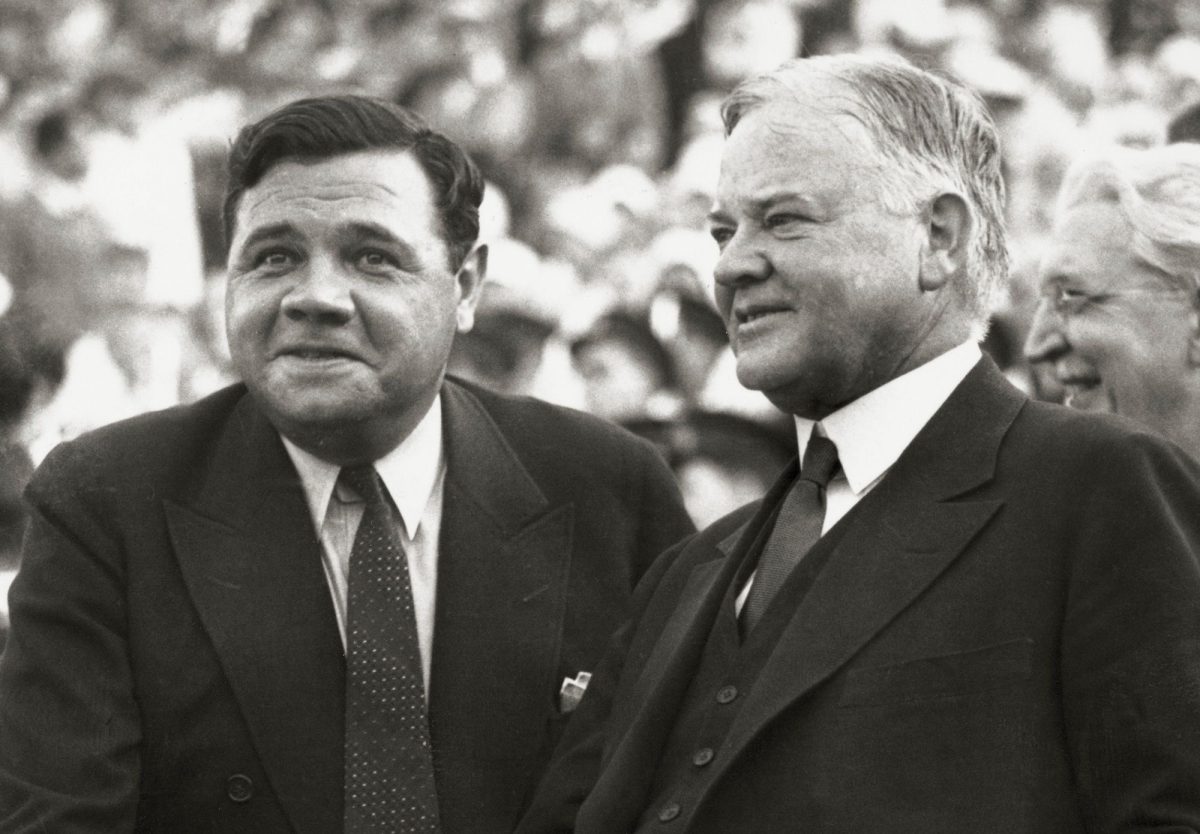 November 1928: Elected president, Herbert Hoover seems the prototypal poor boy made good—born West Branch, Iowa (pop. 350), orphaned at three, and raised by various relatives. His compass is tenacity. Hoover works his way through Stanford, gets rich as an engineer, and heads War I’s Commission for Belgian Relief, saving millions from starvation as “The Great Humanitarian.”

In such triumph and tragedy, baseball was Hoover’s constant. He dreamt of playing at its highest level, having been a shortstop as a boy, then making Stanford’s freshman team in 1893 and challenging “the San Francisco professional team to play us,” he said.” When Stanford trailed, 30-0, the collegians called “it off … deciding I would make a better [team] manager than shortstop.”

Later, Hoover endorsed boys’ baseball leagues on every level, giving dozens of baseballs for use as awards. A photo of the 1920s secretary of commerce shows him opening Washington’s sandlot season by throwing out the first ball. “The rigid volunteer rules of right and wrong in sports,” he said, “are second only to religious faith in moral training—and baseball is the greatest of American sports.”

In 1928, the world champion Yankees opposed his campaign v. New York governor Alfred E. Smith. Their starting lineup, pitcher Waite Hoyt, and batboy posed for a photo, each carrying a bat with a letter attached. The bats read “For Al Smith.” Ruth was later asked to pose with a picture of Hoover. “Nothing doing,” Babe reportedly said. ruth refuses to pose for hoover! papers screamed. Next season Ruth was told that his $80,000 salary topped the president’s $75,000. “I know,” Babe said, “but I had a better year than he did!”

As president, Hoover saw nine big-league sets, seven with Philadelphia. In 1929, the Athletics won the Series in a 3-2 classic that Hoover would otherwise have loathed. “I want more action in baseball,” he said. Excitement “reaches ecstasy when somebody makes a run.” Agony defines what he felt at Game Three of the 1931 Classic. Mr. and Mrs. Hoover entered Philly’s Shibe Park and walked to their ground-level box. Each pitcher stopped warming up in deference, but most people there had no deference on their mind.

Hoover waved to those at Shibe, sparse applause ensuing. Boos followed, then a chant in the twelfth year of Prohibition, by people unable legally to drown their grief. Few there ever forgot: “We want beer!” The president’s wife Lou appeared stunned. Hoover remained stoic. Taunting grew: “We want beer!” No one could recall such a scene. After eight innings, the pa voice announced the Hoovers’ exit. They walked onto the field past the A’s dugout. The taunt resumed, louder. Even Hoover’s favorite sanctuary, save the church, had been invaded.

For Hoover, baseball was something to absorb, somewhere to retool. Out of office, he suddenly became—likely oneness with an underdog—a rabid Dodgers fan. For post-war America the Fall Classic meant autumn in New York, Hoover linked by radio, tv, or at the park. Even in the regular season, he became a semi-regular at Ebbets Field. Hoover attended many Old Timers’ Days at Yankee Stadium, including tossing out the first ball at 86, greeted by Joe DiMaggio, Bob Feller, and Red Ruffing. He was never too old to follow baseball—and did so until the end.

Also telling are photos, Hoover wearing a coat and tie while fishing. Having created a rural presidential retreat, “Camp Hoover,” in the Blue Ridge Mountains of Virginia, near what is now Shenandoah National Park, he no longer fished, a sport Hoover liked almost as much as baseball. All his life he traveled America looking for the best spots to fish, a pastime so dear that he wrote a book about it in his post-presidency: Fishing for Fun and to Wash Your Soul. When he died in 1964, at 90, a U.S. memorial postage stamp carried the epitaph, “Engineer, President, Humanitarian.”

In 1955, he saw Dem Bums’ sole title after seven Series losses in a row, beating the Yankees in 2-0, in Game Seven. To Hoover, Brooklyn’s millennium in the morn explained why he loved the game—the sense of community in West Branch or Flatbush; the engineer’s precision of a finely tuned double play; the joy of a wind-lofted blast; the feel of baseball’s rhythm, especially on radio. The affair can last a lifetime, and here with God’s grace did.