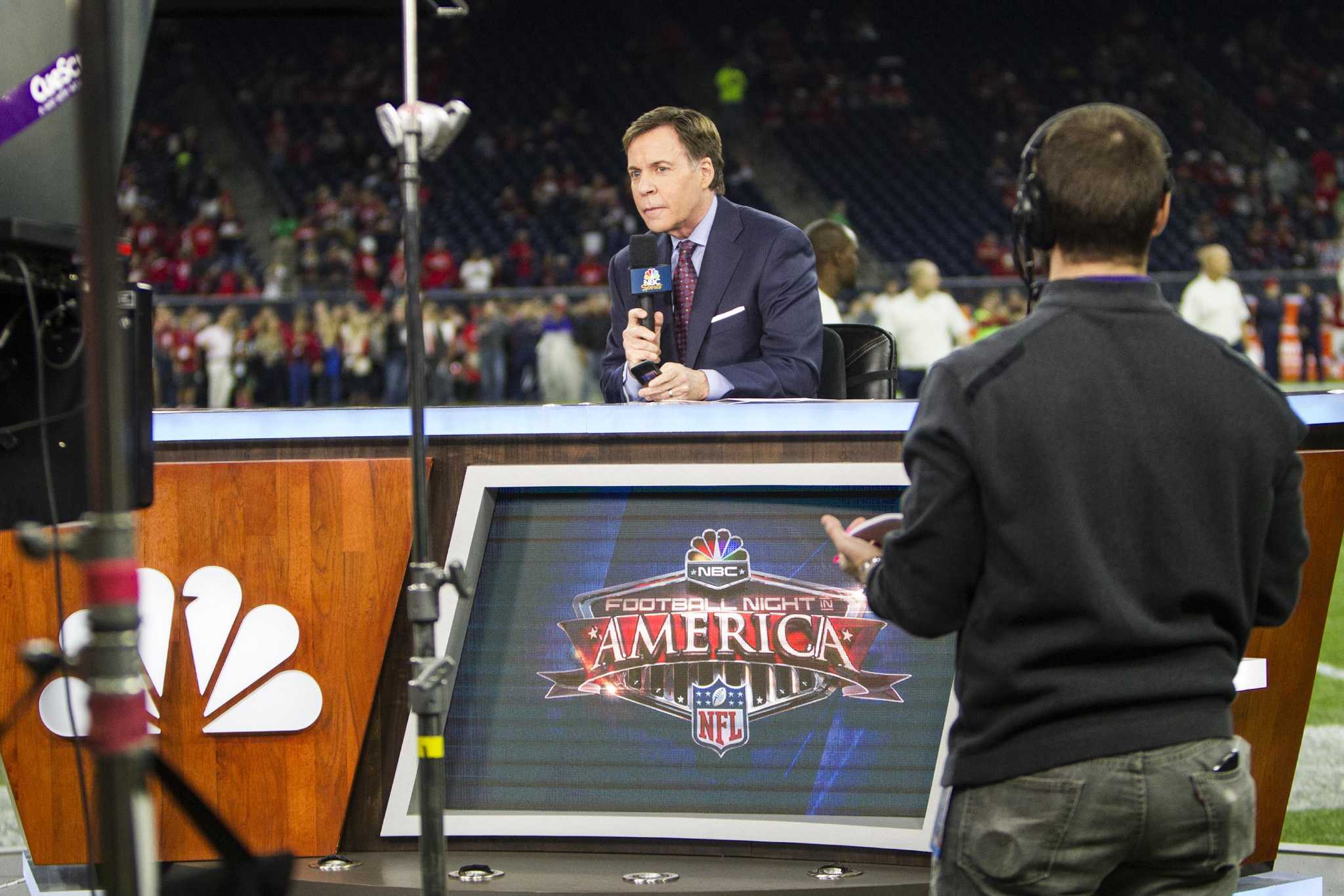 Bob Costas is among the most gifted sports broadcasters to grace television this generation. He’s an even better human being; one who’s always willing to extend a hand to those in need of his counseling, whether it’s a student or a job seeker. Bob accommodates interview requests no matter how remote, including those at ungodly hours carried on lightbulbs of radio sticks somewhere in the hinterlands.

Right or wrong, my judgment of broadcasters’ on-air ability begins with their command of the language. It says a lot about their intellect, their preparation and curiosity. Of those still active today, there’s no one who extemporizes as elegantly, cogently or as colorfully as Bob. Vin Scully is retired, Jack Whitaker is in his 90s, Keith Olbermann is on-the-air and then off and Howard Cosell died in 1995.

Bob’s principled, not mercurial. He articulates and shares his farsighted beliefs sensibly and tastefully. He doesn’t hit the airwaves with a provocative agenda to rouse an audience for cheap attention. Smoke doesn’t falsely billow from his ears. It’s not a show and it’s not about him. Costas is serious. Sadly, today’s airwaves are spotted with inflammatory impostors who masquerade as pundits, preaching false pretenses; all for attention and a fraction of a rating point.

I’m not suggesting that I always agree with Costas. Yet he’s raised critical issues through the years; notably the country’s gun culture and the dangers of the hard-hitting NFL. He also stirred entertaining debates like the bloodless subject of baseball’s divisional playoffs.

After some forty years on network television, Costas has earned the influential capital of a powerful pulpit. His heartfelt warnings on the dangers of football have merit. He’s not leading a lunatic’s one-man crusade. Many other commentators too have similarly articulated their great concern for the hazards of playing the sport. Heck, even the NFL hasn’t denied the issue and for that matter it isn’t sitting by idly. The league has agreed to compensate victims. It also pumps dollars into research to improve helmet safety.

Many network broadcasters, young or old, secure or insecure, internalize their emotions and remain impervious, at least vocally, to what they observe covering sports. If they can stomach it, God bless them. I’m just not sure it’s always the right thing for play-by-play announcers to do.

It’s one thing not to address the issue of college basketball’s one and done practice. No one is dying. One and done rules are established outside the lines. But brain damage and NFL veterans are inextricably linked. Brain damage occurs within the lines; strikingly and starkly, witnessed every weekend on television.

Had Costas been given the opportunity to host the 2018 Super Bowl pre game show, he certainly would not have bellowed an impromptu sermon on the safety of the sport; not on football’s most deified day, when it is celebrated nationally. Bob is an absolute pro. He’s no less so than Brent Musburger who after being fired on the eve of the national college basketball title game in 1990, worked the championship broadcast and treated it with reverence. Not once did he utter a negative word on-air about CBS or his boss at the time Neal Pilson.

Understandably though, NBC is beholden to the NFL. Ratings, revenue and programming are NBC’s sustenance. The network must abide by an unwritten requirement  to separate church and state on NFL broadcasts. It’s risky for the network to even blur the line.

So you might say that a Super Bowl hosted by someone who questions the safety of the game is antithetical to the spirited and symbiotic presentation of the league and the network. Likely, in the eyes of the NFL, Costas’ very presence on television’s center stage triggers a negative by osmosis. As such, NBC had to anticipate or support the league’s thinking. Conviction in this case, predictably so, took a back seat to pragmatism.

It reminds me of a story told by Lindsey Nelson, albeit about a subject less dire than brain damage. In the 1950s, Chevrolet exclusively sponsored a Saturday college football program on NBC Television. The former Giants baseball announcer Russ Hodges was hired to host the show. After the first Saturday, the car company called the network and demanded that Hodges be replaced immediately. It said that Russ bore a striking resemblance to Walter Reuther, the head of the United Auto Workers, the company’s arch enemy. Russ was gone by week #2.

I’ve always been enthralled by those who open up and share their earnest opinions, not those who fabricate tales and pollute the airwaves. LeBatard, Cowherd, Olbermann, Kornheiser and Wilbon challenge viewers in various degrees to take deeper dives and think beyond the chalk. Columns, past or present, by Dick Young, Peter and George Vecsey, Phil Mushnick, Bill Plaschke, Bill Rhoden, Larry Merchant, Mike Lupica and Bob Ryan were or are nurturing and stimulating. Agree or disagree with what the columns profess, mighty pens jump-start many mornings. Costas at heart is more than a standard host, he is a columnist on-air.

On NBC Sports’ website there’s a wonderful profile of the network’s longtime engagement with national sports. Dick Enberg said that absorbing the photos along the corridors of NBC Sports is a rich trip through sports history. The network goes back. NBC Radio did the first national sportscast, the Rose Bowl in 1927.

The site includes an interview with the irrepressible Dick Ebersol who talks about how the network won a piece of the NFL after a void of several years, promising the league to build Sunday Night Football into primetime appointment viewing. He went out of his way to sign Al Michaels, extricating the announcer from his contract with Disney. Ebersol’s strongest message is the network’s need to show leagues and governing bodies love. Take no short cuts, put your best foot forward.

NBC, for instance, flew its top executives to many SNF games, not just the talent and the production crew. When decisions had to be made on the spot, the executives immersed. And being there, according to Ebersol, demonstrates caring, a true partnership. Is it conviction, pragmatism or both?

We’re blessed with many platforms today which wasn’t the case on March 24th 1962.  Fighting for the welterweight championship in the boxing ring at Madison Square Garden, Emile Griffith pummeled Benny Paret comatose. It was in full view of an American public watching on primetime television over ABC. It was gory. Paret died ten days later. At the weigh-in the morning of the fight, the Cuban, Paret called Griffith (in Spanish) a faggot. It obviously stuck to Griffith’s ribs that night. Years later, Emile came out as bi-sexual.

Boxing survived for a few decades longer but historians feel that Paret’s death started the long decline of prize fighting.

There was no forum then. Social media was at best what you heard on AM radio talk shows. There were three television networks and often weak independents. There was essentially no cable, no major FM radio, no cell phones or internet. There was no sports talk either. Yes, boxing is a broader subject. Yet some discussion of safety at the time might have slowed the decline.

Silencing the debate over the NFL safety issue is dangerous. Muting discussions of it is un-American. The last time I looked, the red, white and blue flag represented some sense of freedom.

As for the dangers of the game, the NFL and the networks need to worry less about Costas than they do the first major sponsor to pull its dollars after mothers complain visibly and loudly about the ills of the sport.

Imagine a couple hundred moms in St. Louis picketing in front of Anheuser Busch or in Purchase, New York outside Pepsi headquarters. The media would pick it up, and pressure would mount on these two NFL sponsors to pull their NFL partnerships. If just one does, it could cause an avalanche of financial suffering that shakes the game’s ecosystem to its core.

If I may invoke Red Barber on a controversial moment, this one is full of fleas. And how about Red Barber? There’s debate over whether the Yankees actually did fire him for talking about the small crowd–413–at the stadium one day, or whether it was because he was so unhappy to have a group of ex-players–including one who never prepared for the broadcast and one who constantly interrupted him and the others–surrounding him. Barber once told Bob Edwards that he didn’t criticize Howard Cosell because he had a style and did what he needed to do to make it in… Read more »

The Griffith-Paret fight, called by Don Dunphy on ABC Television’s Fight of the Week, also effectively ended the career of famed referee Ruby Goldstein, considered the best in the business, a man who ref’d all the major bouts of that era. In a previous fight he officiated, Goldstein stopped the match too soon in the opinion of many ringside pundits and fans. In the Paret-Griffith fight, Goldstein, perhaps thinking of the criticism he received, arguably let this fight go on too long as Griffith continued to pummel the head of the defenseless Paret and it was felt by many, including… Read more »