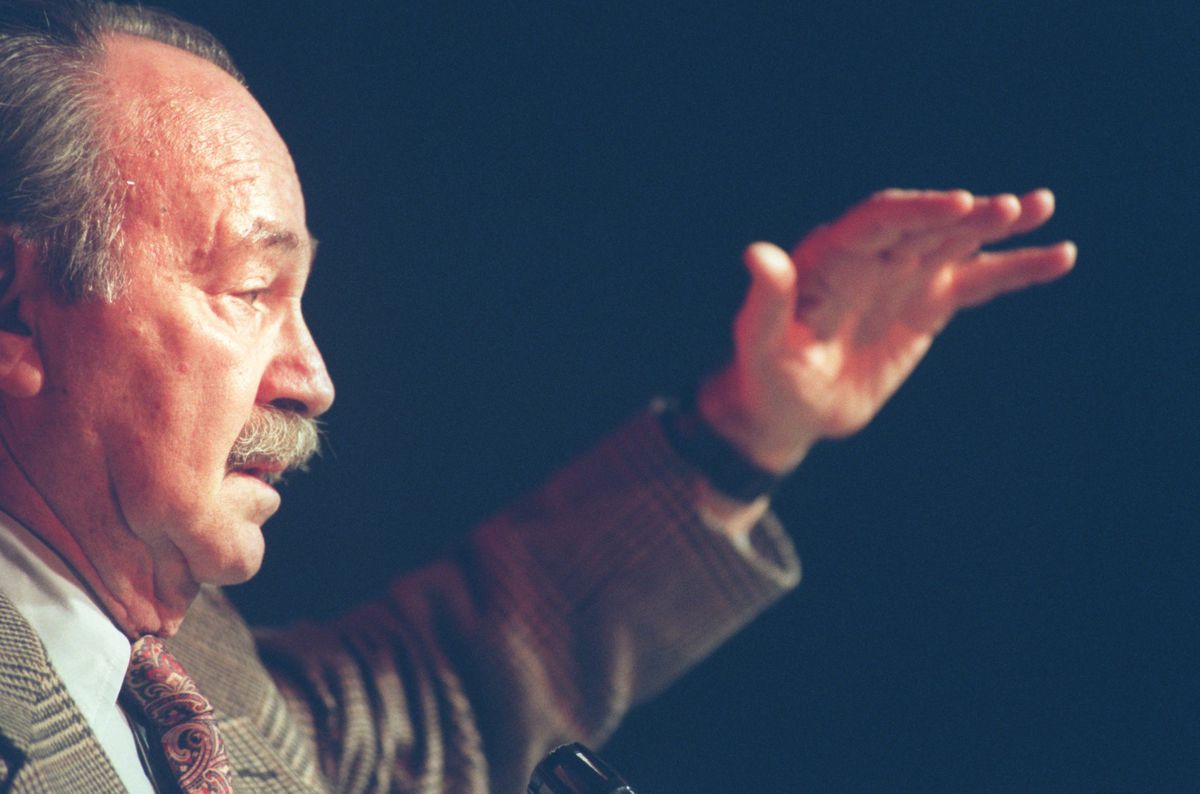 Marty Glickman painted graphic word pictures, called games with a sonorous voice and smooth, rapid-fire delivery. He was the father of basketball on radio. In the NY area and beyond, he stimulated fan interest in the NBA during the league's fledgling years

THE NBA’S EARLY YEARS. THE COMPELLING VOICES WHO PAVED THE WAY

In those fledgling years, the team announcers were creative and committed pioneers who helped energize fans and popularize franchises. Television coverage was limited at best, very limited. There were so few games on network TV that if you blinked, you might have been out of luck. Locally, very few teams had television packages or even all their games on radio.

In fact, it wasn’t until 1970 that every game of the NBA title series was on network television. That’s 50 years ago, but 24 long years after the league was born.

Initially, the NBA as a whole was almost a year-to-year proposition. Attendance sputtered. Doubleheaders were scheduled for added attractions and teams would have to go to some ungodly towns off the beaten track. For instance, the Knicks played one of many neutral site games in La Crosse, Wisconsin. It was the barnstorming of yesteryear. The record-setting 100 point game by Wilt Chamberlain was held in Hershey, Pennsylvania.

Today, the players have chartered aircraft and the CBA (Collective Bargaining Agreement) prohibits teams from playing more than two games back-to-back. Early on, there were long and rickety train rides and sometimes teams played four games in four nights. Moreover, the players had to work in the off-season to make ends meet.

In 1961, the NBA season ended with eight franchises. Ten years earlier in 1950-51, there were 11 teams in the league. You get the picture, things weren’t always as glorious as they are today when there are thirty prosperous clubs (prior to Covid-19). Back then, franchises functioned on a shoestring. In 2020, the Knicks and Celtics are the only two original franchises who’ve maintained their original nicknames and cities.

In those early post-war years, if basketball was consumed in realtime anywhere outside arenas it was on radio. Realtime wasn’t a word yet and computers weren’t even in science fiction movies.

Unlike baseball and football which had been on radio for decades, the men behind the basketball microphones had no blueprint to follow. Knicks’ voice Marty Glickman authored the early lingo and fashioned the rhythm for fast paced basketball broadcasts. He invoked the vocal landmarks that he heard belted out by coaches on the practice floor, geographic spots like top of the key and baseline. As the ball moved in rapid speed and eye-blinking succession around the court, Marty clipped his words crisply to paint an harmonious and graphic word picture. His authoritative voice connected the dots brilliantly.

By the time the pros opened up in 1946, Marty had done college basketball doubleheaders at Madison Square Garden which began in the late 1930s. So when the Knicks were born, Glickman was ready. As radio announcers were hired throughout the league, they had little experience calling basketball. Jim Gordon, the announcer for the Syracuse Nats and Football Giants, told me that the inexperienced game callers scurried around for recordings of Marty’s work to learn how to call basketball. Chick Hearn too shared with me that the first NBA game he ever heard was done by Marty.

These 12 folks laid the seeds. They developed the lexicon and built bonds with their communities.

These  are the top dozen NBA broadcast pioneers during the league’s first 15 years, 1946-61:

The Father of basketball on radio, Glickman was the Knicks’ voice, from 1946 through the mid 1950s. He returned again, off and on, in the 1960s. His tempo and cadence pulsated in perfect musical-like measure. Marty said that he called games as though he was playing in them. By the end of a game, he was exhausted. “The Knicks milling and weaving as Carl Braun holds the ball right of the keyhole.”

Chick began broadcasting NBA games when the Lakers arrived in Los Angeles from Minneapolis in 1960. That first season in LA, the team didn’t have a radio package until the playoffs. That’s when owner Bob Short hired Hearn and the rest is history. He called the games devotedly and passionately for 41 seasons. His streak of unmissed games in 36 years (1965-2001) underscores his commitment to a franchise which he loved. Hearn talked at lightning speed, never missed a dribble and shared humorous anecdotes as the game bopped along. His TV/radio simulcast turned into a Vaudeville Act. He was unique and enormously popular. Al McCoy, a legend himself with the Suns, says that Glickman popularized the NBA in the east and Hearn out west.

Johnny started as Marty’s sidekick with the Knicks and moved to Boston in 1953. He became a Celtics icon and the soundtrack of their many championship teams. The joy in his voice when Boston won was genuine. He rooted hard on-air. From his perspective, the Celtics never committed a foul. Early on, particularly under the influence of Glickman, he was quite descriptive and spot-on. Later he became a caricature of himself. Johnny idolized Marty whom he said could call a marble contest on radio. Most, a heavy smoker, had a palpable and inimitable rasp. He was associated with the club for five decades. “Havlicek stole the ball.”

Bill Campbell did the Warriors starting in the 1950s and later in the 60s when the 76ers moved to Philadelphia from Syracuse. The popular Merrill Reese, Voice of the Eagles and a Philadelphia native, told me that the late Campbell was the best Philly play-by-play man ever, certainly the most versatile. Campbell also did the Phillies and Eagles. Bill was behind the mic for the only live broadcast of the Knicks-Warriors game on March 2, 1962. That was when Wilt Chamberlain scored 100 points. The final quarter of the radio broadcast is available on YouTube.

Not many recordings remain from the NBA’s 1950s. The oldest I was able to find on YouTube was the final game of the 1958 NBA championship when the St. Louis Hawks knocked off the defending champion Celtics for the title. Blattner was excellent. When the Hawks moved from Milwaukee to St. Louis in 1955, he became the team’s voice. Hawks center Ed Macauley said. “His delivery was great. His voice was always friendly. He was never screaming. Everyone liked him. He never took cheap shots at anybody.”

Keiter did Knicks games in the mid 1950s and although he and Glickman had a running rivalry, Keiter was fast and can turn a word. Clichés, Marty would say, derisively. Les didn’t give the score, rather, “The arithmetic reads.” While Glickman erupted with “swish,” Keiter would say, “He tickled the twine.” Marv Albert who would later grow into the league’s popular national broadcaster was influenced considerably by both  Glickman and Keiter. “In the air, in the bucket!”

One of the all-time best play-by-play sportscasters in Indiana history, Gates did lots of hoops in the Hoosier state, including all those fabled high school championships. He was behind the mic for the Fort Wayne Pistons before they moved to Detroit in 1957. Gates and Glickman shared the microphone for the NBA’s first ever All-Star Game in 1951 in Boston. Glickman told me on a couple occasions that Hilliard was “quite good!” Network standout Chris Schenkel, said of Gates, “I always called him my hero.” Chris was from Indiana.

His dad Bill McKechnie managed the Pirates and Reds. Jim was the Voice of the Syracuse Nats from the early 50s until they moved to Philly in 1963. He authored the line,”Yes,” for a made basket. For road games, McKechnie translated symbols and abbreviations off the wire to recreate the broadcast for Syracuse listeners. It is said that when the ticker tape of information broke, he envisioned something plausible and presented it on-air. Once communication was reestablished, McKechnie discovered that he was only a few points off with his guessing game.

The Lakers were originally members of the NBL but jumped to the rival BAA a year before the merger in 1949. Enroth did the Lakers play-by-play beginning in 1948. He remained with the club through the 1958-59 season. Records indicate that Enroth didn’t announce Lakers games their last season in Minneapolis. While he did other sports including Gophers basketball, he was also the first announcer for the Vikings in 1961. Dick is best associated with the great Lakers’ teams at the time led by George Mikan. The Lakers won five NBA titles during their Minneapolis years.

He didn’t do a ton of NBA and never beyond the early 1960s. Curt, the network TV icon, did the Celtics before Most. At the time, he was the Voice of the Red Sox. He told me that the Celtics ownership promised to pay him but that he never got a dime. Known for football and baseball, Curt believed that basketball was his best sport. He played the game at the University of Wyoming. When he was in New York working with Mel Allen on Yankees broadcasts (1949 and 50), he did some Knicks games from time-to-time with Marty Glickman. Gowdy also did some NBA in the 50s and early 60s on NBC Television, filling in for Lindsey Nelson.

The Rochester Royals moved to Cincinnati in 1957. Ed Kennedy broadcast Cincinnati Royals games from 1959-60 through 1967-68 on several Cincinnati radio stations. Beginning in 1969-70 and  through 1971-72, Kennedy did the games on television. The club then moved to Kansas City. For many of his seasons in Cincy, he chronicled the great Oscar Robertson. Kennedy was described to me as being somewhat philosophical on-air. He apparently presided with less of a traditional play-by-play orthodoxy. Kennedy was more of the listener’s ‘friend at the game.’

Jim arrived in New York after working some NBA games in Syracuse. He lived in his mom’s house with his young family when he first came down to NY, until he found some work. In the mid 50s, Gordon backed up Les Keiter and Marty Glickman on Knicks games. He covered the team again later in the 60s and 70s on both radio and TV. Basketball was his best sport. He was fast and had a good feel for the game. Gordon did some of the great Knicks’ playoff run in the 1970s. He also did the first Knicks game ever played in the current Madison Square Garden on February, 14, 1968. It was on Channel 9, WWOR-TV.

Great list and great stuff! Lindsey was the weekly NBC TV sports voice in those days, and did a good bit of NBA, but it’s interesting that he was never associated with it, even then, so much as he was with football and, to a lesser degree, baseball. I wonder how much of that was that the NBA was so much less popular then.

Bud Blattner really deserves the Frick Award at Cooperstown. He was a pioneer in so many ways.

Ed Kennedy also was the longtime TV voice of the Reds.