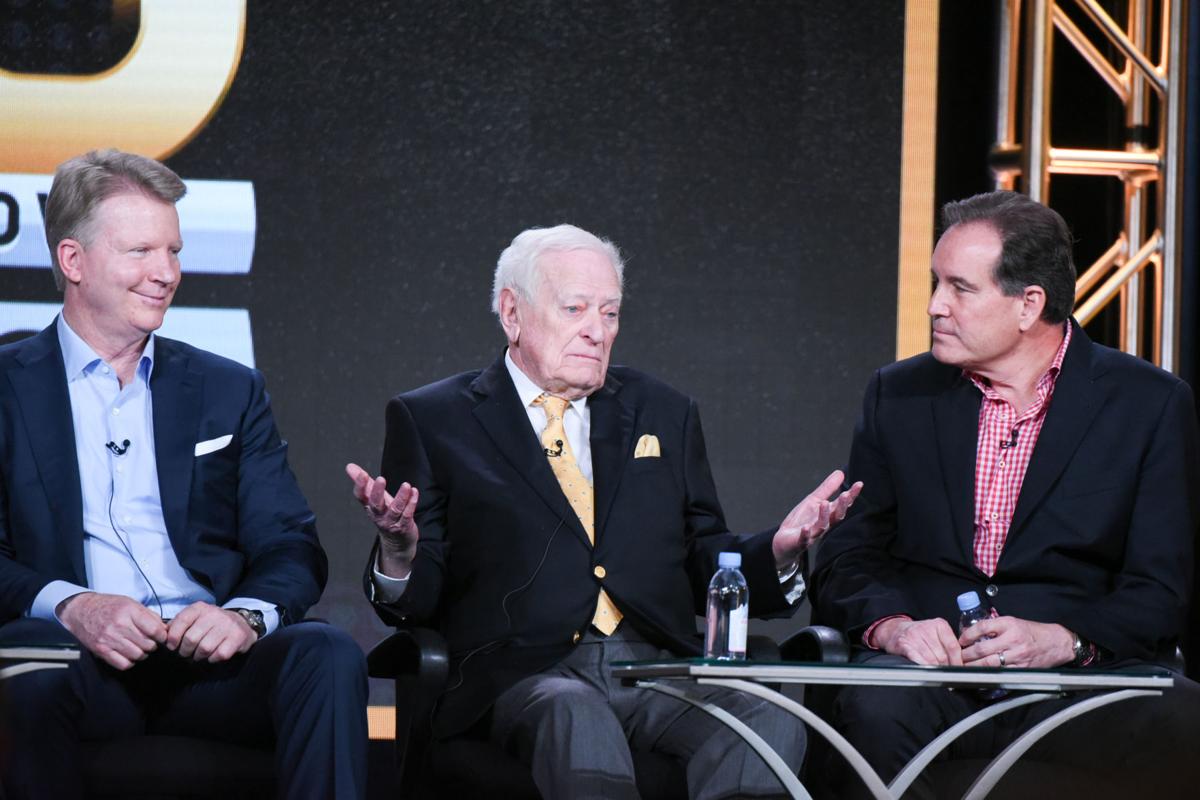 He set the scene for so many events and stamped the big ones memorably, whether it was the Masters, the Olympics or the Kentucky Derby. Whitaker is gone and so is the era of the even-tempered, thought provoking and sensible sports television columnist.

Many of Sunday’s headlines highlighted the fact that Jack was the last broadcaster alive who called Super Bowl I in 1967.  Accurate for television but hardly the highlight of the man’s glistening career. It’s a sidebar at best.

By Jack’s own admission, play-by-play wasn’t his strength and he didn’t do much of it through his long career. “I wasn’t very good at it,” he told me frankly last year. And for the record, Tom Hedrick who did the first Super Bowl on CBS Radio is still hale and living happily in Kansas.

Yes, Whitaker loved football and for that matter he was the first host of CBS’ NFL Today.

But he did his best work from sports’ esoteric and ancillary fields of competition. He was terribly hurt when he was bounced from covering the Masters in 1966 for referring to the cluster of patrons around the 18th hole as a “mob scene” and then hurrying to wrap up the broadcast on playoff Monday fighting the tyranny of the clock to Walter Cronkite’s nightly news. In the rush of it all, he also made no mention of Butler Cabin. It didn’t sit well with Augusta management.

The setback never tempered Jack’s love for the game and the Masters asked him back some years later. He was disappointed by the way CBS told him he won’t be assigned the Masters, sharing the news with him casually in a New York cab. CBS was acting on indirect orders from Masters’ boss, Cliff Roberts.

I last checked in with Whitaker shortly after this year’s Masters. His mind was sharp but his hearing was weak. We talked briefly about Tiger and how Jim Nantz brought the historical together brilliantly on television. Scully had Barber, Marv had Glickman and Michaels had Gowdy.

Some 15 years ago, I asked Jim who his broadcast idol was growing up. No surprise. No hesitation. Jack Whitaker.

Jim stayed in touched with Jack regularly. Whitaker for that matter told me in April that he hears from the busy CBSer about once a month. I saw Nantz last week at the annual CBS press conference prior to the NFL season.  He sadly gave me the heads-up, telling me that Jack was now in hospice.

Whitaker had shared with Jim the physical challenges he faced day to day and that it increasingly diminished his quality of life. Jim being Jim, tried to pump up his mentor. He told Jack, “Hey, we’ll be in Philly for games this fall. We’ll go out and have some dinner.”

Nantz saw it coming though.  Sunday came the news.

I checked in with a couple of our fellows whose work you’ve read, Rich Podolsky and Dan Mason.

“I used to save the essays he recited on the NFL Today. They were handwritten and he pretty much memorized them. About 1979,  St. Joseph’s University in Philadelphia asked him to speak at commencement (he graduated from there in ’47 after he was injured in WW II). I got to read that speech too. There’s one line I distinctly remember: “There are two things Americans cherish,” he said. “Jeffersonian Democracy and the quarter-pound cheeseburger.”

“My memories of Jack were his steady hand in the stress of the U.S. Open. Jim McKay was sort of the Costas of his day in a host role but it was obvious to the golf aficionado that Jack really knew the game. He had a way of framing a moment and carrying it through to tournament completion. T.C. Chen, famously known as “Two hit Chen” for his double hit in the 4th round  of the 1985 U.S. Open, ultimately lost the lead to Andy North that he wouldn’t regain. I recall Jack being on that the rest of the 4th round.”

Howard Cosell  passed in 1995 and Jim McKay in 2008. No shouting. Cosell was brusque and McKay even-keeled. Neither had gimmicks. Now airwaves are filled with nasty polemics.
Today, the versatile Bob Costas, still vibrant, sharp and insusceptible to corporate forces, fits a similar bill. But at the moment his work  is limited for the most part to play-by-play.
Bob is one of the few today capable of fueling a brightly lit three wicked torch of opinion, elegance and equanimity.
Jack was one of the greats. I really wonder whether his thought provoking essays would fly today in a world limited to 100 characters.  I had the opportunity to interview him is early ’18. He opened up a great deal. Here’s the link:

When I was a kid, I started watching golf on CBS because Vin was (and is) my idol and he was at the 18th hole. The rest of the crew was Ken Venturi on the course, Pat Summerall at 15, the veddy British (and later veddy controversial) Ben Wright at 16 (unless the par 3 was at 17, in which case they reversed), and Whitaker at 17. What a wonderfully literate crew that was! Whitaker also was wonderful on horse racing but those essays were simply magnificent. He once said the greatest job he ever had was doing the backup… Read more »

I had the pleasure of playing Jack in the movie Ruffian, the story of a match race between 1975 Kentucky Derby winner Foolish Pleasure and the filly Ruffian. The race was very competitive but on the back stretch Ruffian broke her ankle and was euthanized. She is buried at Belmont. I did Jack’s standup in the paddock area which ran prior to the race. Standing where Jack stood, and reporting as he did was quite a thrill and a real honor—not to mention the experience of making the movie (the makeup, having a small closet in a trailer as a… Read more »