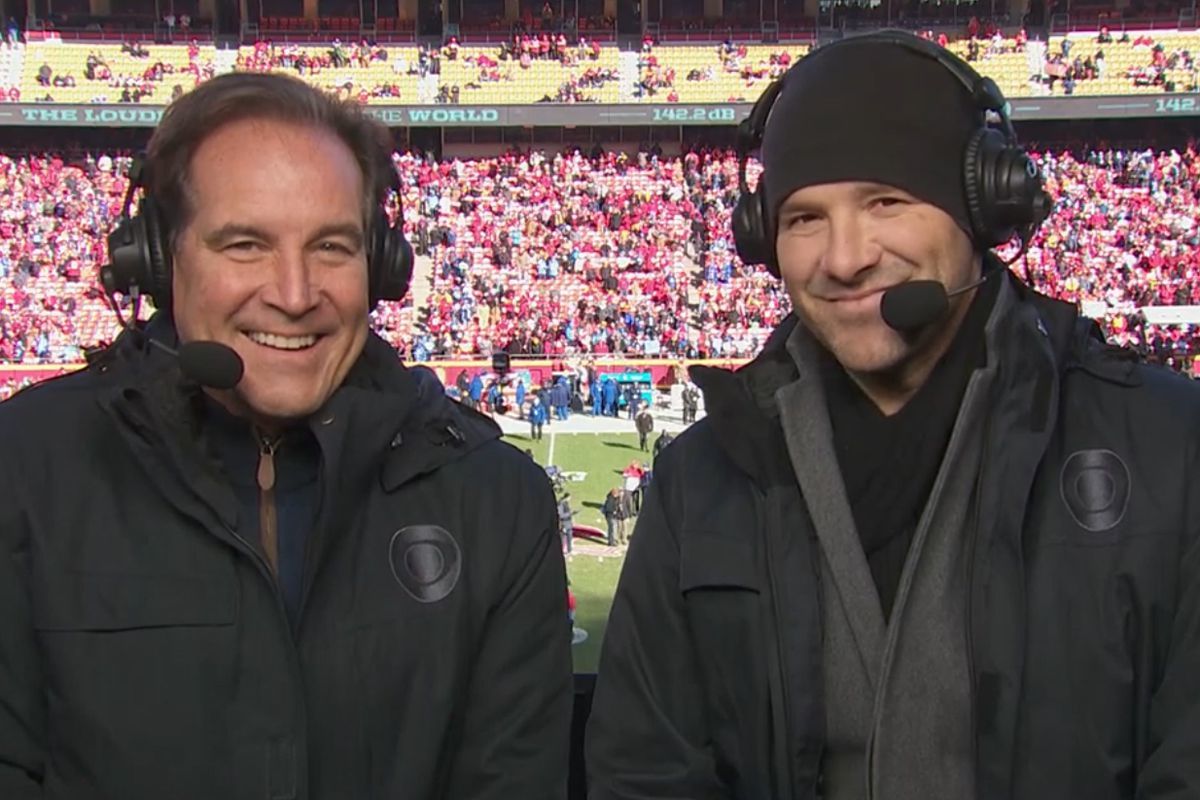 Teammates Turn to Taunting: One key matchup Al Michaels and Cris Collinworth mentioned in the lead up to this game was teammates turned rivals in Rams quarterback Matthew Stafford and Buccaneers defensive lineman Ndamukong Suh.  Once teammates in Detroit, they now find themselves on either end of the line of scrimmage in today’s game. Suh after sacking his former quarterback was called for a taunting penalty, to which Michaels mentioned again that they were once teammates, showing how there has been no love lost.

Coordinators Becoming Coaches?: Throughout the first quarter, Michaels and Collinsworth highlighted the amazing work of the offensive and defensive coordinators of both the Rams and the Buccaneers. Al even made mention of the fact that all four coordinators in this game have had interviews lined up as head coaching candidates around the NFL, making their names well known around the NFL.

Al Michaels Helps Out Mike Evans: Up through the middle of the second quarter, Al Michaels noticed how Buccaneers’ wide receiver Mike Evans has yet to make a catch. This was surprising to the dynamic broadcast pair since he has been the most dependable target for Tom Brady given the injuries to Chris Godwin and Scotty Miller, along with losing Antonio Brown due to his storming off the field in the regular season. Immediately after Michaels made this comment, Mike Evans made his first grab of the game, proving the commentator jinx can be positive.

Bloody Brady: After taking a shot to the head, Tom Brady could be seen yelling at the referee arguing for a penalty, which is what he gets, just not in his favor. The referee calls  Bady for an unsportsmanlike conduct penalty which infuriated the future Hall of Famer.  Cameras follow Brady over the course of the drive pleading with the ref as his lips bleed from the hit to no avail.  Al mentions that this is the first ever unsportsmanlike conduct penalty for TB12, which is incredible considering how long he has been playing.

Tom’s Final Game?: Tom Brady in the lead-up to this game had been asked if this is the final run in what has been an illustrious career or will he go for the perfect ending.  Brady went back and forth a lot in his answer, giving no clue to which direction he might head.  Michaels and Collinsworth spent a chunk of the third quarter discussing whether they think this is the end of the road for the greatest quarterback, and they seem just as unsure as everyone else is. The possibility of Brady hanging it up doesn’t seem like the perfect ending if the Bucs lost. But Michaels speculates that we’ll find out soon enough.

Trying to Run it Back: Entering the 4th quarter, the NBC broadcast crew highlighted all of the times teams have won back-to-back Super Bowls. This feat has not been commonplace in the last 20 years, with the last back-to-back champions being the New England Patriots in 2003-2004, ironically led by Tom Brady. With father time catching up to Brady, Michaels and Collinsworth speculated that if the Buccaneers are able to defend the throne or if this is the end of the road.

Brady Can’t Convert: On a crucial 4th and 9 play late in the fourth quarter, Brady was unable to get a first down, giving the Rams possession again, up 14 points. Cris Collinsworth analyzed how this was one of the first plays all day that Tom Brady had enough time to read the zone, yet the Rams defense did a great job in coverage, even though there was an open receiver. By not converting this 4th down, the future is starting to look bleak for the defending champions.

Brady’s Back: In what seemed to be the beginning of the end for the Buccaneers, Tom Brady throws a beautiful pass to wide receiver Mike Evans for a touchdown, making it a seven-point game. Michaels after the play asked Collinsworth “Why are we surprised reveling in the way  Brady is able to make incredible comebacks out of difficult situations.  Collinsworth reminds the audience that the Rams still need to play offense and not lose sight of how they’ve played thus far, rather than be too conservative. Despite this, the Rams turned the ball over, giving the Bucs another chance to tie or take the lead.

Rams Redeem Themselves: After the Buccaneers tie the game coming back from a massive 27-3 deficit, Rams’ quarterback Matthew Stafford throws a beautiful dime to Cooper Kupp to bring the Rams into the red zone, where kicker Matt Gay nails a game winning field goal.  Michaels coins the game as “dramatic and storybook,” as we have now seen all three games this weekend come down to game winning field goals.

Mahomes and Allen are Elusive: Much of the discussion around these two high powered offenses leading up to today’s game revolved around their respective evolutions to not rely on the big plays and make more disciplined decisions. Jim Nantz and Tony Romo analyzed this as it was happening on each of their first offensive drives, with both quarterbacks showing off their ability to scramble and run when there is no one open.

Mahomes Chippy Play to Pringle: In the red zone nearing the end of the first half, Patrick Mahomes eludes pressure and avoids a sack to find wide receiver Byron Pringle in the end zone for a touchdown. Romo analyzes more of the elusive nature of Mahomes and why he is so difficult to stop, giving the Chiefs a 14 to 7 lead after the two-minute warning.

A Tale of Two Fans: While Tony Romo analyzed the need of the Buffalo Bills to hold onto the ball until halftime, the CBS camera crew cut to a Bills fan praying saying “please”, showing some desperation for his team to find success.  Immediately afterwards, the camera crew cut to a pack of Chiefs fans cheering crazily for their team, showing positivity and excitement.  These fans demonstrate the mood of the game as time winds down, where one team can be comfortable and the other must put their play into overdrive.

A Weekend of the Kickers: In previewing the playoff bracket to date, Jim Nantz makes mention of the fact that in all three games this weekend has ended with the away team’s kicker making a game winning field goal with time expiring.  Tony Romo adds to this discussion, talking about the Bengals win, amazed at how they were able to win despite giving up 9 sacks to their quarterback Joe Burrow.

Mecole Makes it Look Easy: On a Chiefs jet sweep play where the ball got handed off to wide receiver Mecole Hardman, he was able to turn on the jets and get around the edge to score for a touchdown.  Jim Nantz cannot contain his excitement on the play as the Chiefs add 6 more to their total.  Tony Romo is amazed at the blocking, along with the pure speed of Hardman to make that play possible.  Jim Nantz even adds that despite his crazy speed, it was Mecole Hardman’s first ever rushing touchdown.

Bills Return the Favor: Immediately after the Chiefs scored a touchdown, Josh Allen and the Bills put together a deep bomb to wide receiver Gabriel Davis for a touchdown on a one play drive.  Tony Romo breaks down the play using “Romo Vision”, showing how Allen passed up a checkdown to throw that deep pass, showing the Bills’ aggressive nature in this win or go home game.

Gabriel Davis Have Another: On a 4th and 13, Josh Allen throws to a wide-open Gabriel Davis for a touchdown to take the lead.  Tony Romo analyzes how Allen was able to find him because the cornerback in coverage slipped and fell, allowing the Bills to capitalize.  To add salt to the wound, the Bills made a two-point conversion to give them a three-point lead, giving Mahomes the chance to run the two-minute drill.

Hill Says Peace Out: On a short pass by Patrick Mahomes, Tyreek Hill shows off his ridiculous speed to go for 60+ yards to score a touchdown, giving the Chiefs a four-point lead.  Tony Romo expertly analyzes how the Bills tried to get rid of the inside corner to prevent the big play, but when dealing with the fastest player in the NFL, it takes a lot more than that.  Romo adds that this game is the epitome of a quarterback game, where both quarterbacks have played lights out, leaving nothing out there in hopes of moving on to the AFC Championship.

Four For Davis: Gabriel Davis does it again, scoring another touchdown by taking advantage of the Chiefs’ defense having trouble communicating and lining up in coverage.  Jim Nantz notes that this is the first ever playoff game in NFL history where a receiver has scored four touchdowns, and that it has come from one of the least likely suspects.

Chiefs Find a Way: After the game went to overtime, Patrick Mahomes finds Travis Kelce for a touchdown to win the game.  Even with the refs questioning whether it was a score, the Chiefs end the Bills’ season in their tracks. Romo mentions how Bills’ quarterback Josh Allen had a perfect postseason and still came up short.  The broadcast then showed Allen sitting on the bench upset with the result. The final shot shows a happy Andy Reid, celebrating his team’s victory.