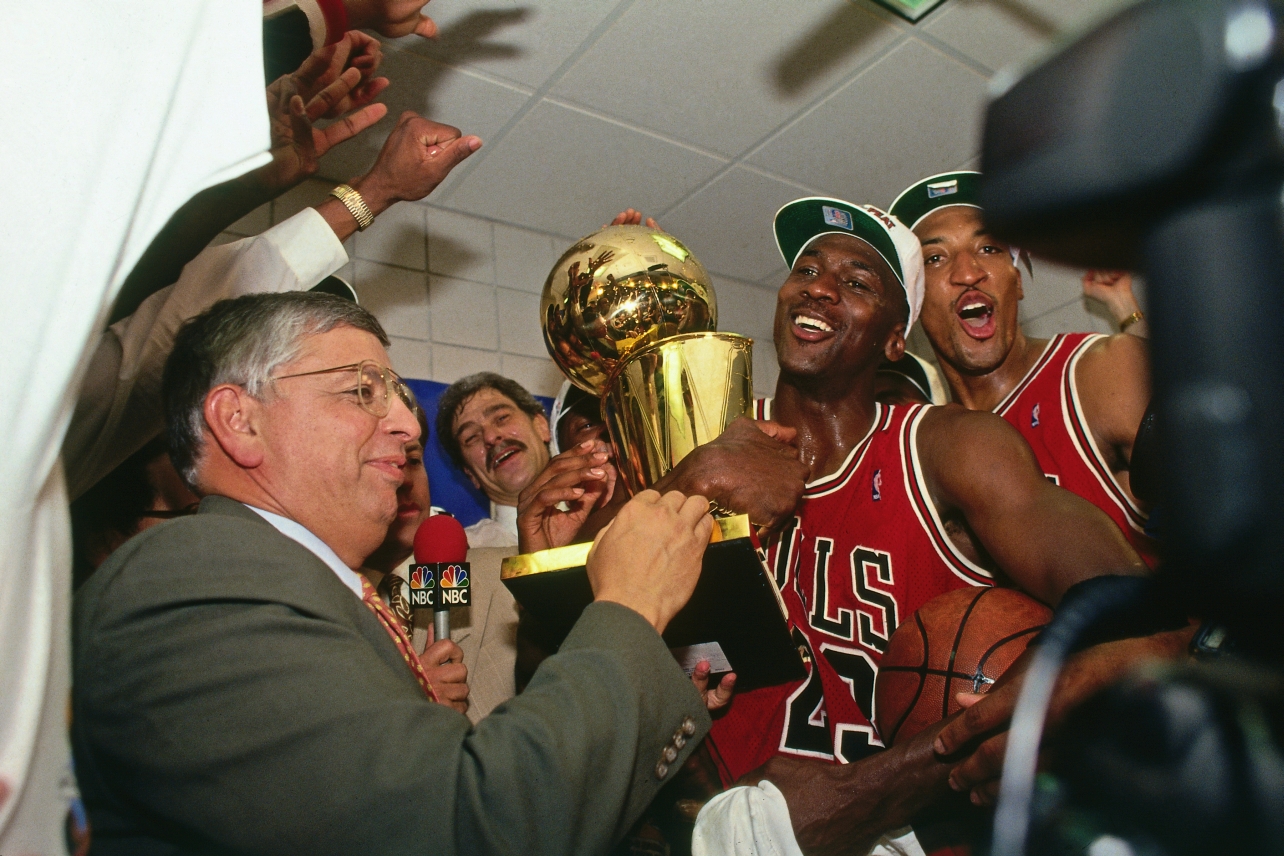 From start to finish, the making of ESPN’s docuseries, The Last Dance had a longer history than Michael Jordan’s eighteen year playing career. Filming began in 1997 and the TV hit didn’t reach cable viewers until last month.

Heading into Jordan’s final season with the Bulls in 1997, NBA Photographer and Film Producer Andy Thompson convinced current NBA Commissioner Adam Silver, who at the time was the head of NBA Entertainment, that everything should be filmed. But convincing Jordan was another matter. (Thompson is a brother of former NBAer Mychal Thompson and uncle of the Warriors’ Klay Thompson.)

When Silver pitched the Jordan team to allow the NBA to collect precious footage, he made it clear that nothing would be done with the film unless it was approved. If it never gets published or never gets shown, he reportedly said, it would make for some great home movies for Jordan’s children.

The six time champ said okay, let the cameras roll. But it took 23 long years for the curtain to lift. And when it finally did this spring, America got an engrossing lesson in what makes this ultimate embodiment of competitive spirits tick. Viewers saw what fuels the driving force that turned Michael Jordan into a global phenomenon?

Since that magical day in 1998 when Jordan capped his sixth championship, the NBA checked in with him periodically, to see whether he was ready to approve the use of the footage to create the series. Jordan had always been apprehensive about the film and never felt he was ready to look back. He didn’t want the material to be misconstrued.  Through much of this series, viewers witness the Hall of Famer’s harsh demands on his teammates.

But years after collecting precious footage, the strong-willed subject acquiesced. He finally said, run with it. Produce a series. So, in this dark environment during Covid-19, one of shuttered arenas and stadiums and in an unfathomable stretch when TV is devoid of live games, the Jordan story has gripped millions.

It was a different world in the 90s in more ways than one. Technology wasn’t as turnkey as it is today. In 1997, the idea of embedding a large film crew into locker rooms, hotel rooms and athletes’ homes was almost unprecedented. Having a camera crew following a pro team around was difficult and much costlier.

The production crew went to great lengths to collect 500 hours of never-seen before footage of the final championship run, starring of course Michael Jordan himself.

In recent years, the Bulls celebrated the 20th anniversary of their last championship and on the TV front multi-part documentaries were becoming increasingly popular with the “Making of a Murderer” and “American Crime Story.”

Another consideration could have been to develop visibility among both the college aged group and younger teenagers, those who knew about Jordan but never actually saw him play live. It was time to bring Michael’s story to life.

Remember too that LeBron has now captured the NBA spotlight for more than a decade. Could James have been on Jordan’s mind when he approved the docuseries?

No footage was to be off limits. If this was going to happen, it had to be accurate. Tough issues were tackled, from gambling, political controversy and the horrible murder of Jordan’s father. In other words, the story transcends basketball.

Agree or disagree, like him or not, The Last Dance is for broader human consumption, not just basketball fans. It’s a story of life, success, an uncontainable drive and the human spirit.

The producers felt that it was critical to bring in other athletes, coaches and notables. When the project was initiated it was not solely meant to be the “Michael Jordan documentary.” Yes, Michael is the main character, but the Bulls did not win that final championship without other contributors. The personalities of Scottie Pippen, Dennis Rodman, Phil Jackson and other characters are profiled too. They’re all critical to the storyline.

The producers also agreed that interviewees should be introduced through titles that reflect the times of their lives when they shared a connection with the subject. So Barack Obama on Jordan and the Bulls was labeled, “former Chicago resident.” The ex-president lived in the Windy City as Jordan and the Bulls dominated the NBA. Bill Clinton, who commented on Scottie Pippen, was referenced as “former Arkansas governor.” Pippen is an Arkansas native.

We don’t see the personal side of Jordan today, majority owner of the Charlotte Hornets or his relationship with his family. You might say that Michael deserves to have his privacy in how he conducts his life today. For that matter, the home he was interviewed in for the documentary wasn’t his. It didn’t take place interviewed in Jordan’s palatial 28,000 square foot Florida home.

The ESPN docuseries often jumps back and forth. The story is not presented chronologically so as not to dim the narration of the backstories. The directors and producers worked hard with timewarp graphics and timelines to set the history straight.

In the series, you’ll see Michael watch interviews with guys like Isiah Thomas and B. J. Armstrong on an iPad then respond instinctively to their comments. Unsurprisingly, Jordan wanted the last say in the interviews conducted for the series.

One thing learned for sure, Jordan is more than a logo on a shoe. The Last Dance demonstrates how hard he really worked to achieve greatness, plowing down whatever stands in the way.