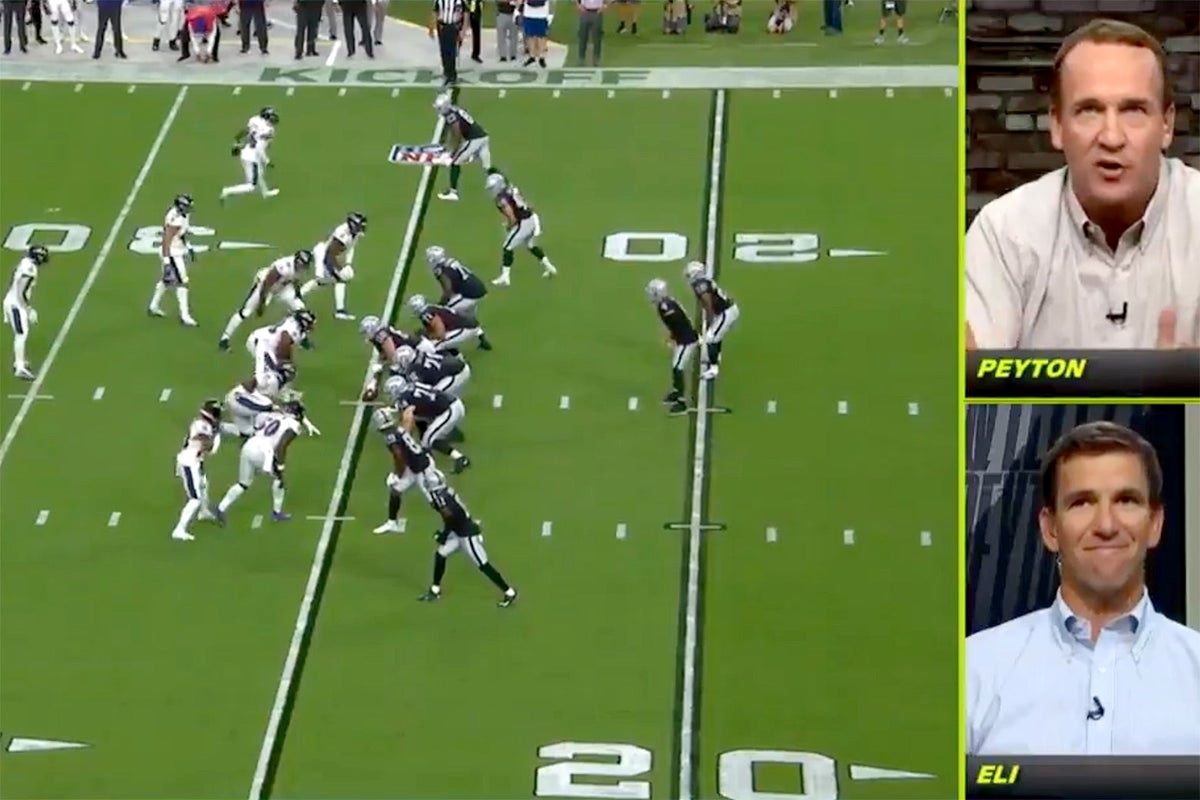 Monday Night’s ManningCast returned to ESPN2 last night. The side by side show had been on a three week break, last seen on Week #3. New Orleans defeated Seattle 13-10 at Lumen Field.

The broadcast felt like it was trying to replicate the feeling of watching a football game on the couch with your brother. The result was a mixed back, Yet it has potential. (Brees and Brady)

Peyton and Eli are off script and talk freely about the game, albeit it sometimes feels like the game and the Mannings are covering different topics. For diehard viewers, it was an opportunity to tap into the IQ of four Super Bowl winning quarterbacks, Peyton and Eli Manning, Drew Brees and Tom Brady. Indeed, we learned something about schemes and concepts of offenses and defenses.

However, the flow of the broadcast seemed very choppy. The start of the game was rushed, and it did not give the Manning brothers a chance to set the scene for the game. They also had to cut to the mandated commercial breaks during the games, particularly frustrating when the Mannings and guests were in mid-sentence.

These are my ten observations watching last night’s ESPN broadcast:

1 – There was no clear initial welcome of the Mannings on ESPN2. The ESPN mainstream broadcast and the Mannings’ introduction were somehow interwoven at first. During the first two plays of the game, the siblings were conversing about Seattle QB Geno Smith’s performances the past two games.  The first play that Peyton and Eli analyzed was the third play of the game. My roommate complained. He wanted to hear the game. In other words, the two casts weren’t in lockstep and were rather unsettling.

2 – Peyton and Eli, Tennessee and Ole Miss alum respectively, had a pre-determined bet for the Ole Miss-Tennessee game on October 16th when Ole Miss beat Tennessee 31-26. The player representing the losing team had to wear the winning team’s jersey for the first half of last night’s Seattle-New Orleans matchup. Peyton wore what he described as a “youth medium” Ole Miss jersey. He peeled it off as the clock wound down to halftime.

3 – The ManningCast had different Zoom guests each quarter. Their first guest of the night was former All-ro running back Marshawn Lynch, who said he took three shots of Hennessy before he went on-air. That was enough to sober up all viewers. I’m sure the ESPN execs were delighted to hear it. He remarked that while on the field he would have a “football in one hand and Hennessy in the other.”  Lynch cursed a few times on-air, which was part of the reason social media buzzed about his appearance. It was entertaining, but Manning had to apologize for Lynch’s swearing at the beginning of the second quarter.

4 – In the second quarter, Tampa Bay Buccaneers quarterback Tom Brady was on the broadcast. Brady admitted to Peyton and Eli that he “has become a warm-weather quarterback” by playing in Tampa. He said that he has already looked at the weather for Bucs’ Week 10 contest in Landover, Maryland, against the Washington Football Team. Brady must have lots of confidence in weather forecasters.

5 – One playful jab uttered by Brady: “Playing defense is like a dog chasing a car.” He jokingly talked about how offensive players are overall better football players. This drew the ire of Brady’s former teammate, legendary New England linebacker and now ESPN analyst Tedi Bruschi, when he jokingly quipped on Twitter that he wasn’t Brady’s friend anymore.

6 – Brady, Peyton, and Eli talked about how they feel playing against base-defenses versus more multiple-defensive schemes. Brady reminisced about some of his worst experiences, those coming against Dolphins’ defenses of the early 2000s, which featured Zach Thomas and Jason Taylor. According to Peyton and Brady, the Dolphins ran the same base defense the whole game, and both QBs had their struggles against that defense.

7 – In between all the interviews and videos, Peyton and Eli would sprinkle in some game commentary. On a 3rd-and-9 near halftime, Peyton criticized Seattle quarterback Geno Smith for bailing the pocket a bit early on a throw that was almost intercepted by New Orleans safety C.J. Gardner-Johnson.

8 – In the third quarter, Peyton and Eli had Seattle Storm (WNBA) star Sue Bird as their guest. It seemed like this interview was more difficult, as the Manning brothers had to switch between interviewing a basketball player and analyzing a football game. There were some great bits from the interview, as they showed some clips of Bird mic’d up on the floor. Peyton remarked that Bird “sounds like she is the player and the coach on the floor.” The elder Manning brother also told her, “Don’t let the guy (Rob Lowe) that played Sodapop Curtis from The Outsiders announce your retirement,” in reference to Lowe prematurely announcing Peyton’s retirement before he signed with the Broncos in 2012.

9 – During one sequence, Peyton asked Bird what play she would call. She said, “I don’t know,” but later said she could have been helped if she had a quarterback wristband with the plays on it. Good retort. There was also footage of Eli and Peyton playing pickup basketball against each other, to which Bird remarked, “You remind me of when football guys at UConn would play basketball with us – a lot of fouling.” still a forced interview.

10 – The last guest of the night on the ManningCast was now NBC Sunday Night Football studio analyst and former Saints quarterback Drew Brees. It was a great move to have Brees on in the fourth quarter, because the game was close. He offered plenty of insight on the Saints’ offensive scheme. In particular, it was interesting hearing Brees’ analysis of how the center is supposed to call out protection in Saints offense. Additionally, there was one play called “Jab 16 Post” where Brees knew the exact play call. With his knowledge of the Saints’ offense, Brees added the most to the telecast as far as the three guest analysts. . The trio of three ex QBs on the set in Q4 also explained the dynamics of “Blitz Zero” which was excellent.

There were plenty of magical moments on last night’s ManningCast. The choppiness and disconnects, between the Mannincast and pure gamecast has to be addressed. It’s hard to follow divergent conversations.

But would the Mannings be better as mainstream commentators on ESPN’s traditional broadcast with Steve Levy?