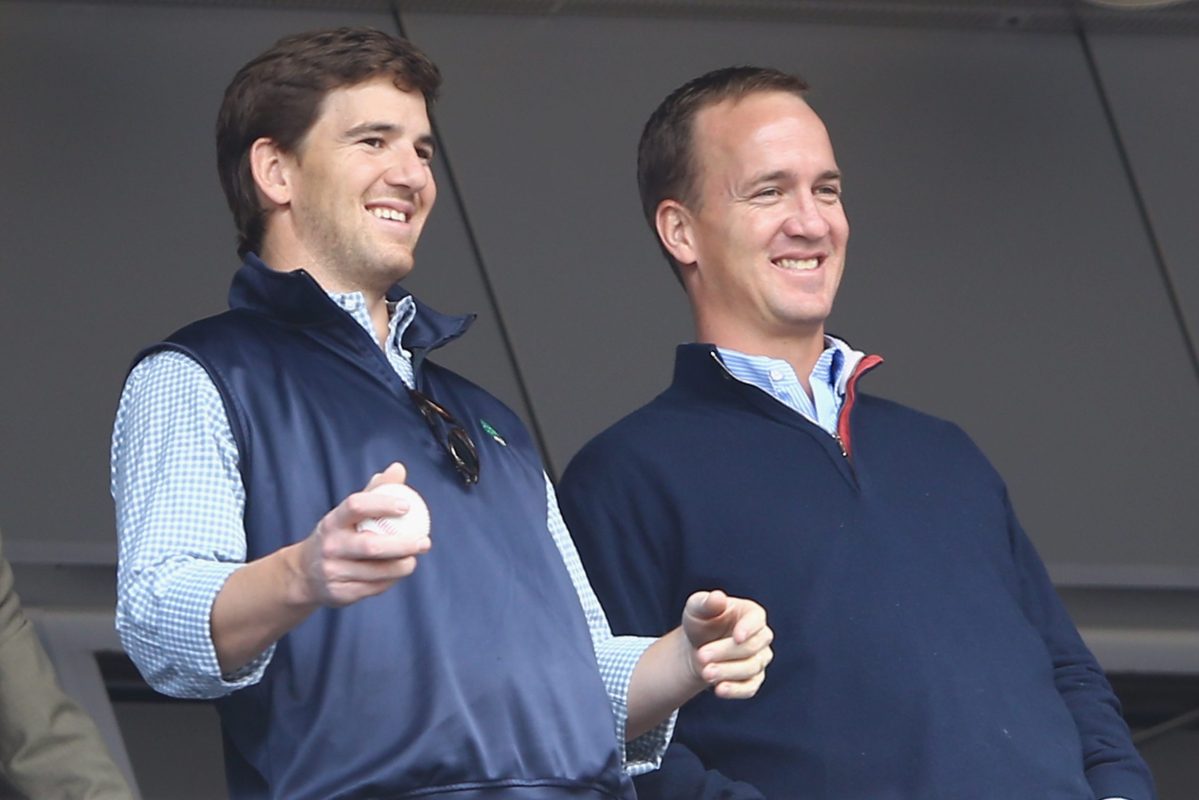 Broadcasting has evolved over last 100 years. Radio was the first medium, AM only. While we knew no better early-generation audio was marred by static. But it was better than dead air which was the case until 1921 when radio was born. FM came along in lockstep with soothing music in the 1960s and later it was followed by an explosion of programming on satellite radio.

After the war when TV came into being, the screen was tiny. The size of the picture grew slowly in the 1950s as did viewership. By the 1960s color TV was a phenomenon. Cable, followed and then streaming.

Because of its multi-platforms, ESPN introduced multicasts over the last ten years or so. Fans were afforded  opportunities to watch events from various perspectives. In a limited fashion, the easy-going Manning brothers added a degree of personality to side-by-side telecasts.

Last night, the  Mannings on ESPN2 teamed for a few laughs with Larry Fitzgerald, Dwayne Johnson and Russell Wilson. Here’s what they covered.

Because of the game blowout that the telecast turned into, the Mannings likely drew more interest than usual. One has to wonder. Will side-by-side telecasts discount the value of traditional play-by-players?

Larry Fitzgerald the Tight End?: When asking if he could still help the Cardinals, Eli Manning suggested that future Hall of Fame receiver Larry Fitzgerald could put on a uniform and play tight end. Fitzgerald responded humbly, saying that there was no way he could play today, adding humorously that the one obstacle would be having to block.

Golf with Eli: Returning from a commercial break, Peyton Manning raised a photo of Larry Fitzgerald running routes with Eli Manning, poking fun of the fact that he was wearing khaki shorts on the football field. Eli was quick to defend himself saying he had just left the golf course, continuing the season-long banter between the two Manning brothers.

New Nickname for Eli: After a commercial break, Dwayne Johnson revealed that Eli  has never been labeled with a nickname throughout his career.  The movie star determined that Eli should be called ‘HCM,’  for the human carbon monoxide machine because he is the silent killer. Peyton and Eli laughed, even adding that Eli should add that name to his chain given to him from Snoop Dogg a few weeks ago.

Peyton in the WWE?: Since Dwayne Johnson became famous during his time in the WWE, Eli bantered with the man formerly known as The Rock by asking on Peyton’s behalf whether he could be a WWE superstar. The Rock upped the ante saying that Peyton could get in the squared circle with him so he could get a few more sacks in since his playing days at the University of Miami.

Von Miller’s Drive to Get Better: When talking about the Rams defense, Peyton discussed how amazing his former teammate Von Miller is and what he brings to the table.  Peyton described how in Denver, Miller would not only go through pass rush drills against the offensive line but would also line up against receivers and practice coverage. Peyton detailed how this dedication to getting better at all facets of defense is what makes Von Miller a lethal defender on the gridiron.

Eli’s Tablet: Coming out of a commercial break after a Rams touchdown, Eli Manning broke down how the Rams offense was able to score given the all-out blitz from the Cardinals. The camera crew cut to an over-the-shoulder view of Eli’s tablet as he broke down the film, giving this segment a sideline feel as if he was in the game going over the play with his coaches.

1 Win vs. 35: In early anticipation for a matchup between the Rams and the Buccaneers in the divisional round, Peyton and Eli discussed how much more free Rams’ quarterback Matthew Stafford will feel not having to deal with reporters asking him about not having any playoff wins.  Eli was quick to note that in a matchup between Matthew Stafford and Buccaneers’ quarterback Tom Brady, it will be a battle between a quarterback with one playoff win, and a quarterback with 35, making it a battle of experience.

High Praise for Budda Baker: As a guest on the Manningcast, Russell Wilson sent out some well-wishes to Cardinals’ safety Budda Baker who suffered a head injury earlier in the game. Wilson said that Baker is such a great player and one of the most special players on the field where you fear going up against him. As a division rival, Russell Wilson has had his fair share of games against Baker, hoping he gets well soon.

Technical Difficulties: During some audio problems with the Mannings in their separate locations, Peyton said that he could not hear Russell Wilson talking about his take on next week’s game between the Rams and Buccaneers. Wilson jokingly warned Peyton not to curse on camera this time, referring to when he used profanity in frustration with previous difficulties.