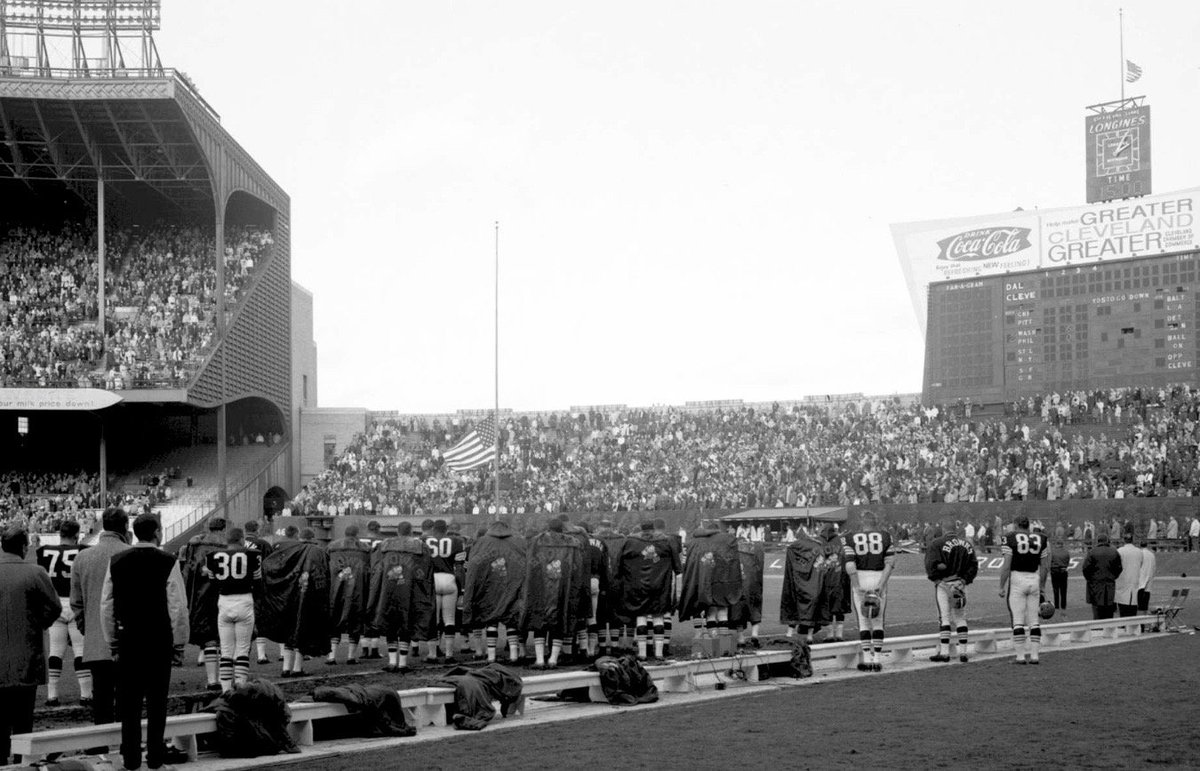 Dallas at Cleveland, 11.24.1963, The visitors were introduced to the crowd as simply the Cowboys. Dallas wasn't mentioned.

President John F. Kennedy was killed by a sniper’s bullet in Dallas,Texas, 50 years ago this past November 22nd. It occurred late on a Friday morning.

Two days later, the NFL played its full schedule of seven games. Back then, in 1963, there were only 14 teams in the league. None of the games was televised. As the country mourned, CBS, the NFL’s television partner,was in assassination coverage mode.

Many felt the NFL made a bad mistake

Pete Rozelle, who was appointed commissioner in 1960 at age 33, was charismatic and a public relations dynamo. He helped propel the NFL’s initial growth surge; through television revenue, increased visibility, expanding the number of franchises, merging with the upstart American Football League and introducing the first Super Bowl in 1967. When Rozelle arrived, baseball was the national pastime. When he left in 1989, baseball was overtaken by the NFL.

Rozelle was in his office when news of the president’s assassination erupted worldwide. He then faced what was likely the most difficult decision in his nearly thirty year career as the league’s commissioner.

Rozelle first reached out to Pierre Salinger, Kennedy’s press secretary and a former classmate of the commissioner at the University of San Francisco. Salinger told Rozelle that football was Kennedy’s sport and suggested to him that the NFL not cancel its Sunday schedule. He added that if the president’s brother Bobby Kennedy was consulted, he would likely say the same thing. After further deliberation with members of the league’s office and key franchise owners, Rozelle ordered the games played.

President Kennedy played JV football at Harvard. He didn’t progress to the varsity because of illness and injury. Football though was indeed a family love. Both brothers, Bobby and Ted, played on the Harvard varsity. “Politics is like football,” JFK once noted. “If you see daylight, go through the hole.

This was well before sports-talk radio, social media’s original platform. But columnists had their mighty typewriters and there were those who didn’t embrace Rozelle’s decision to proceed with the schedule. Red Smith was one, writing in the New York Herald Tribune, “In the civilized world, it was a day of mourning. In the National Football League, it was the 11th Sunday of the business year, a quarter-million day in Yankee Stadium.”

Meanwhile, the league had a contract with CBS but understandably the network would not interrupt its special wall to wall coverage of the assassination to cover NFL games. On Sunday, the country was preparing for JFK’s funeral, planned for the next day, Monday,  in DC.

It’s also important to note that unlike today, in a world of mature cable, streaming, satellite and other tentacles of distributional platforms, there were no alternate channels to air the games. Today, for instance, CBS, should it choose to do so, could air critical news coverage on its mainstream network and run the NFL games on its CBS Sports (Cable) Network. Those options weren’t available in the analog age of the 1960s.

The upstart American Football League did postpone its games after the tragedy. Its commissioner, Joe Foss, was an ex-marine pilot and had a particular appreciation for the severity of losing the country’s commander-in-chief. The AFL owners, like Ralph Wilson of the Bills, were stunned by the NFL’s decision to play. They felt that the AFL made a better public relations decision than the bigger NFL.

The NBA rescheduled three games on the day of the assassination, but played two games Saturday and one Sunday. The six team NHL did not have games scheduled on Friday but did play on Saturday.

Two years before his death in 1994, Rozelle told the New York Times that it was the worst decision of his tenure as NFL commissioner. He said, “That week after the funeral and after our games were played, there were columns written against my decision across the country. Obviously, it was a mistake.”

How does it go? “Those who don’t learn history are doomed to repeat it.” As such, it’s interesting  that Joe Browne, for years the league’s top communication officer told reporters that after the tragedy of 9/11 in 2001, the White House wanted the country to get back to normal and suggested that the NFL play the following weekend.  But Commissioner Paul Tagliabue decided to cancel the games nonetheless. Tagliabue was well aware of what occurred 38 years earlier when the NFL did play after the tragic Kennedy event.

Bill Plashcke, writing in the Los Angeles Times after 9/11 thought that Tagliabue was listening “to a voice from the grave,” that of Rozelle’s.

Sports, particularly baseball, were considered unifying events through much of World War II, if nothing more than serving as an innocuous diversion or better still, to lift the nation’s spirits.

Although he firmly backed his decision at the time to play, the mounting criticism from the public and the disparaging newspaper columns wore insidiously on Rozelle. As the years progressed, he was bothered by the core thought of playing football just after the president of a nation is shot dead.

JFK was due a debt of gratitude by the NFL for bailing it out in 1961; enabling the league to market its television rights as one entity, not team by team

John F. Kennedy had his signature on a piece of legislation that has helped the league prosper for the past 57 years.

Historically, Major League Baseball had been exempt from the Sherman Anti-Trust Act, first by an appeals court in 1922 and soon after affirmed my the Supreme Court. MLB was as such able to collectively negotiate national broadcast contracts on behalf if its clubs.The NFL was not. Early NFL television deals were not engineered by the league itself.

The NFL broadcast contracts until 1961 were negotiated team by team. The league couldn’t collectively negotiate one contract for all its teams. Yes, it was a cumbersome one by one, franchise by franchise negotiation.

When the American Football League was organized in 1960, little attention was paid to it. Unproven, the league struck a pooled deal for its rights with ABC, a network that lagged behind the other two, CBS and NBC. In fact, Jay Michaels, the father of broadcaster Al, brokered the deal. The AFL was getting $2 million from ABC.

In 1961, Rozelle, on the heels of the ABC-AFL marriage, convinced NFL owners to cut a deal directly with CBS which it did for $9 million per year, a huge increase of what teams were getting aggregately. But for it to take effect, the NFL needed approval to negotiate as one entity.

You might say that the AFL-ABC deal at the time was made without federal oversight.  But in fact, the AFL got away with it because it was a new league and had no history with local television stations. The NFL though had a complicated television history of team by team contracts with local stations. So when the NFL entered into its new pact directly with CBS, these unconsulted local stations attempted to block it based on anti-trust laws.

In a preemptive strike, the NFL sought court approval of its new CBS deal, bringing it to federal Judge Alan Grim in Philadelphia. But the attempt backfired. Grim told the NFL it was violating antitrust laws.

Losing in the courts, Rozelle went to Congress and cultivated the assistance of the House’s Chairman of  the Judiciary Committee Emanuel Celler. A deal had to be struck quickly so that the new NFL-CBS contract would be valid. A  New York Congressman since 1923, Celler whisked a bill through all necessary committees, hearings and legislation in an economy of time; from August 28th to September 30, 1961.

The bill was signed into law by President Kennedy. It was called the Sports Broadcast Act of 1961. It protected the NFL in addition to the AFL, NBA and NHL.

No longer would member clubs be tasked with developing individual deals with the networks. The NFL, NBA and the NHL have cashed in enormously on President Kennedy’s signature. Most importantly at the time, Rozelle, the NFL and CBS proceeded under its new agreement.

Notes of interest on the Kennedy assassination and sports

Red Smith once said that for all of the brilliant things Rozelle did, he found this so unforgivable that he couldn’t write many nice things about him.

A great piece, and a bit of trivia that I know you know: the Army-Navy game being delayed a week also delayed a little invention that Tony Verna, the CBS director, had come up with. Yep, instant replay.

One slight correction-While CBS DID move to the current announcer system in 1968, it was ABC and NBC that pioneered it out of neccessity for AFL coverage in 1960

I was 11 and my dad took me to Yankee Stadium to watch the Giants lose to the Cardinals. Two things I remember distinctly was my dad saying on the ride home that the game should not have been played, though I think he reached that conclusion only after the Giants lost. I also recall that because there was no TV coverage and therefore no commercials, the game took only 2 hours and 10 minutes to complete.