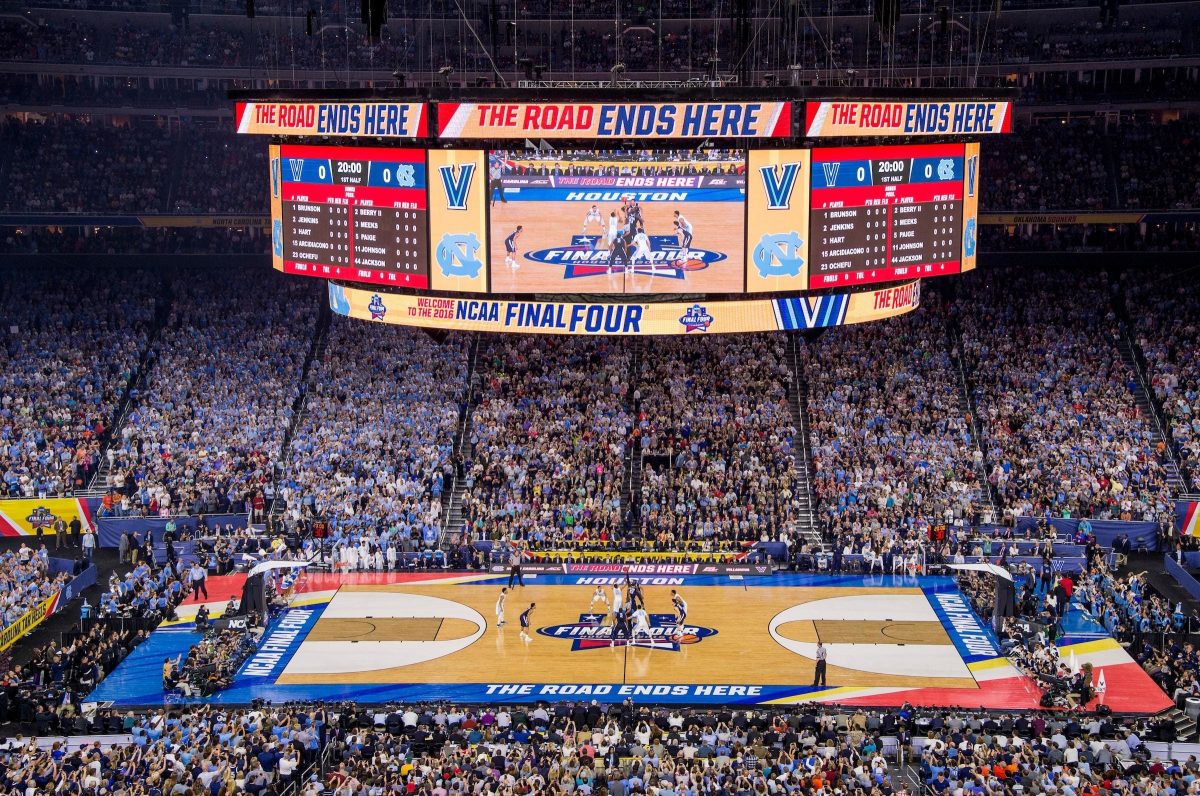 Here we sit. At home. Some with family. Some not. Some with lots of room to roam. Others not.

Some with plenty of interests to keep occupied. Some can get along without sports. Some can’t.

In normal times, hoops fans would likely be thinking title game, the NCAA championship. We’d be talking about Saturday’s semifinal doubleheader. Each year, the iconic Curt Gowdy called Saturday the biggest bargain in sports, the best four teams in the land on one court on the same day for one admission price. Monday, we’d crown a championship.

The Final Four on television doesn’t have a long history, it’s rather short for that matter when compared to the NFL or MLB. But it does have a history of colorful personalities since it was on some form of national TV, beginning in 1963.

1963 The NCAA title game is televised nationally for the first time. Loyola beats Cincinnati for the title. Bill Flemming does the first of six straight on SNI, a syndicated non-line network. The NCAA championship game wouldn’t hit conventional network television for another six years.

1968 While CBS was already carrying NIT games, the NCAA Tournament is not yet on an over-the-air television network. In December, 1968, TVS, a network run by future White Sox co-owner Eddie Einhorn syndicates a showdown regular season game between Houston and UCLA. It pitted Elvin Hayes against Lou Alcindor. It would be played in front of 52,693 fans at the Houston Astrodome. It turned into a seminal game of sorts. The announcers were Dick Enberg and Bob Pettit. Enberg brought great enthusiasm and crispness to the broadcast. The networks took note of both the popularity of college basketball and Enberg.

1969 The 1969 NCAA Final Four was the first that was carried by a major network. NBC ran it and would continue to carry each Final Four through 1981. Curt Gowdy and Jim Simpson were the broadcasters.

1971  Former NBAer turned sportscaster Tommy Hawkins joined Gowdy as the analyst. He would work with Gowdy through 1974.

1973 Led by Bill Walton, UCLA wins its seventh straight national title. It marked the first time that the championship game was played in primetime, on a Monday night. To that point, the championship was on a Saturday.

1975 Billy Packer joins Gowdy as the analyst. It marks his first Final Four. The former Wake Forest guard would do 34 straight championships.

1976 Dick Enberg enters the picture. He and Gowdy call the title game together. Packer would chime in from a makeshift studio off the court in Philadelphia where the game is played. Bobby Knight and Indiana wins the first of three NCAA titles. The Hoosiers would win again in 1981 and 1987.

1977 Gowdy and Enberg would work again. It would be Gowdy’s last title game on network television. Al McGuire led Marquette to a win over Dean Smith’s North Carolina team for the title.

1978 Enberg and Al McGuire, freshly retired from coaching, joins Packer in a three man broadcast. The trio become enormously popular.  McGuire was irreverent and Packer the straight man. They coalesced magically. The three would team for four Final Fours. Gowdy does ones of the semi-final games. His only appearance thereafter would be on national radio.

1981 This would be NBC’s last. It wasn’t a quiet ending. President Ronald Reagan was shot earlier in the day and there was a question whether to cancel the title game that night. With the president out of danger, the powers that be decided to play it.

1982 CBS gets the rights and Packer makes the move to CBS. Gary Bender and Packer would partner for the next three Final Fours. I was told my a gentleman who attended the negotiation sessions that NCAA president, Walter Byers was turned off by the visible internal bickering of the NBC executives at the negotiating table. The NCAA anointed CBS with the rights. They’ve had it exclusively or in partnership with Turner ever since.

1983 North Carolina State stuns powerful Houston for the championship. Bender seems stunned by the last second bucket that won it for the Wolfpack. Packer had to jump in and tell the world what happened.

1985 Brent Musburger replaces Bender in the play-by-play chair. He and Packer preside over the historic upset by Villanova over defending champ, Georgetown, led by Patrick Ewing. On the broadcast, Packer calls for the need for a shot clock. He also suggests that a team fouled should have the option to inbound the ball instead of taking free throws.

1986 The tournament uses a shot clock for the first time.

1989 Lesley Visser is assigned to the sideline, becoming the first woman to work an NCAA Tournament broadcast.

1990 In a shocking announcement on the eve of the championship game, CBS says that it will not renew the contract of the edgy Brent Musburger. It made front and back pages of the tabloids across the country. CBS allows Musburger to announce the championship game. Billy Packer is told that if Musburger veers out of the play-by-play lane, he might be asked to take over and call the game himself.

1995 Michele Tafoya is assigned the sideline. It’s the first of four in a row for her.

2008 Billy Packer does his 34th and final NCAA Final Four. When Kansas led North Carolina 38-12 early in the semis, Packer declared, “The game is over.” Carolina made a game of it but Kansas won. CBS execs thought Packer might have chased away the audience.

2009 Clark Kellogg succeeds Billy Packer as Final Four analyst. Tracy Wolfson is assigned to the sideline. She’s been there since.

2011 Steve Kerr joins Kellogg and Nantz and they work together through 2014. Charles Barkley and Kenny Smith of Turner’s NBA crew begin to partake from the studio on Final Four broadcasts. Turner at that point was a co-rightsholder of the NCAA Tournament with CBS.

2014 Turner is in the coverage mix for the first time and introduces teamcasts. TBS, TNT and TruTV run the semifinals. One channel carries the mainstream broadcast led by Nantz. Each of the other two channels ran a team broadcast, called by announcers with a biased lens from a team perspective. CBS ran the championship game. Clark Kellogg is moved to the studio. Greg Anthony and Steve Kerr partner as analysts.

2016 Turner’s TBS carries the entire Final Four. Between 2016 and 2019, Turner and CBS would alternate coverage of the Final Four.

2018 Dr. Sanjay Gupta, chief medical correspondent for CNN, serves as a reporter for the Michigan teamcast.

2020 Turner’s TBS was scheduled to carry the Final Four but it was cancelled due to coronavirus.

CBS carries Rewinds of classic Final Fours including the 1983 and 1985 title games. The broadcasts revisited chilling moments but they lacked major graphics to educate younger viewers.

In those years, the shot clock and the three point shot had not yet been introduced. Unfamiliar younger viewers watched long shots count for only two points and teams holding the ball for long periods undeterred by a shot clock. The uninitiated must have been baffled.

CBS should have posted a graphic on its Rewind letting the audience know how the game was played then. There was no shot clock and no three-point shot yet.

The networks could also have had some contribution from participating coaches and players. They could have chimed in from the studio or from their homes during this daunting hour of social distancing. At some stoppages in the replays, a Bill Raftery, Steve Lappas and/or Jim Boeheim could have re-litigated strategies and developments. The games were breathtaking and deserved the usual good work of CBS. We didn’t get it.

GREAT stuff. And I’m reminded that Curt Gowdy had been a star college basketball player at Wyoming–he knew the game very well, and I’ve encountered some who feel basketball was his best sport. He started out broadcasting it in Oklahoma, of course, and even did games in New York City when he was Mel Allen’s #2 with the Yankees. I remember the Musburger game (as a UNLV alum!), and thinking when I first heard the news that it was an April Fool’s joke. And a shoutout to Bob Fishman, who has directed so many now–I guess 38? He won a… Read more »

And as a Jersey resident, the 1976 tournament was notable as it was the last time two undefeated teams went to the final four – Indiana, of course, the last undefeated team to win the championship and Rutgers University which wound up losing to both Michigan and then UCLA in the long departed consolation game. 1974 must have garnered some ratings when NC State, with David Thompson and others, finally ended UCLA’s long reign.