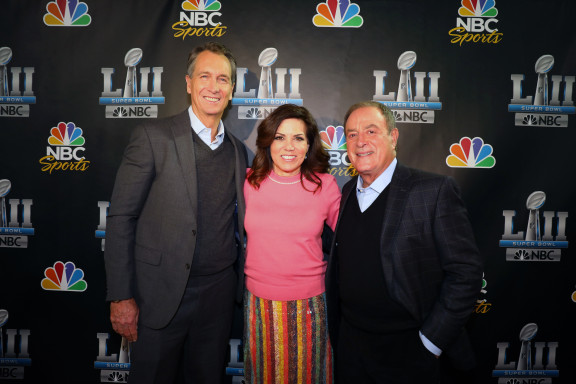 SNF trio of Cris Collinsworth, Michele Tafoya and Al Michaels (l-r) are breaking up. It appears Al's headed to Amazon's Thursday Night Football, Michele into political work and Cris is staying put at NBC to partner with Mike Tirico on SNF.

Many broadcast thoughts flood my brain through the day. As I get older, it’s more difficult to keep track of those charging in rapid succession. Right now we’re in the last phase of the NFL network broadcast sweepstakes. So I’m absorbing and assimilating all the nuttiness of the announcer moves and maintaining my mental bookkeeping.

First, no surprise that Andrew Marchand of the New York Post keeps breaking these stories. He has the intuition and hustle and is given the needed space by the New York Post. The newspaper has already established some supremacy through the trenchant pen of Phil Mushnick. Marchand considers the iconic Mush a mentor. The media beat gets attention in the Big Apple too from Bob Raissman of the Daily News and Neil Best of Newsday. Until not long ago, the NY Times’ Richard Sandomir paid assiduous attention to broadcasters locally and nationally. Through these months of musical chairs, there was hope by many that NBC would somehow extricate itself out of the Tirico deal and extend Al Michaels. But that never eventuated. With his NBC contract about to expire and hopes waning, talk spread that Al would head to Amazon Prime to launch Thursday Night Football. There would be no better stamp of approval. No better name than Al Michaels to debut Amazon Prime’s streamcasts. No better credentials, 36 years on primetime.

In time, NBC’s longtime producer and Al’s crewmate Fred Gaudelli would be hired to steer Amazon’s fresh production team. There was more meat to the rumor. Al would move to Amazon, likely back up Mike Tirico at NBC and maybe even do a playoff game. Now, it looks like it’s how this will fall.

The Peacock will keep Cris Collinsworth with Tirico on Sunday nights. Drew Brees’ immediate future at NBC is unclear. It became official yesterday that Joe Buck and Troy Aikman will team together on ESPN’s MNF where in the past they’ve shown little desire to reach deep into their pockets. It’s all puzzling and head scratching.

Before hiring a play-by-player, Amazon hired a verbally overbearing analyst, Kirk Herbstreit. He has no association with the NFL and now he’ll sit next to the greatest NFL voice. How did that loquacious college announcer get into the conversation? Michaels, sharing a booth with Herbie? It’s impossible!

To date Brent Musburger was the only voice able to keep him in place. He talks and talks, incessantly. Only threats from Gaudelli and  Al will keep him in place. Michaels knows more in his pinky about the NFL than this carpetbagger who bullied his way into an NFL booth does. It’s not just any booth, it’s a Hall of Famer’s

Musburger would cut Herbie right off when he worked with him at ESPN. Brent didn’t allow him to share his long-winded inanities. Al loathed a three-man booth. Now he gets Herbie at Amazon! Talk about an odd couple! What line did Al make famous 42 years ago, “Do you believe in miracles?” Getting Kirk to shut up will be an even bigger miracle.

Both men will also be saddled with a channel that’s impossible to find. It isn’t in the ethers and not on cable. It streams.

Fox – A big disappointment on both football and baseball

The company cut its checkbook and wanted to bring in younger talent. No one could talk Eric Shanks and management out of it. It’s interesting to note that Fox outbid CBS for the NFC rights in the 90s. The NFL rights helped Fox establish a bona-fide network and eventually became a behemoth with programming of all sorts.

Shanks was sitting on dynamite. Maybe he was following a mandate from way up and given sufficient dough? But one last shot at Michaels for three years, two of which, he’d be doing the Super Bowl.

One way or the other,  Al will collect lots of cash, if the stories I’ve read are close, $30 million over three years. He had a symbiotic relationship with partners in the recent past, with fellows like Cris Collinsworth and John Madden. Now Herbie.

At Amazon, he’ll have a significantly lower audience. The games won’t be over-the air TV or cable, it’s streaming. Only home-market games will be made available on terrestrial stations.

Disappointing too is the fact that Fox or ESPN didn’t lasso Bob Costas, still the best MLB voice. The networks lost their lead baseball play-by-players, Buck and Matt Vasgersian. Costas has his fastball and he understands that the summer game is more than just analytics. He’s lived baseball for 60 years. When he calls MLB today, he can easily invoke a parallel piece of history. Bob brings the package; the stories, the memories and the breeziness of his dulcet voice.

Once Fox passed on Al Michaels, it was a terrible disappointment. The big media buyers know him. As we approach Spring when billions are spent in the Upfronts, Michaels and Costas are as big names you can introduce.

Buck, 52, and  Aikman, 55, were hired by ESPN after there were rumblings that the league suggested strongly that Bristol  spruce up its in-booth act. I feel bad for Steve Levy but the menu in Bristol is thick enough so that he’ll continue to get hefty assignments, NHL, college ball and more. Steve is a good company man.

Buck, and friend Aikman will do Super Bowls in 2027 and 2031. Joe learned the fundamentals of play-by-play from his beloved dad, Jack who worked in St. Louis and nationally, mostly on CBS. I’ve seen that Joe and Troy will each get between $5-8 million raises in their shift from Fox each season. As part of the agreement, Buck and Aikman will both men will contribute content to ESPN+, with more details to be announced by the network later. While nothing has been announced, don’t be surprised if Joe gets involved in MLB or other sports. He’s done the last 22 Fall Classics and 26 in all on Fox. Joe once told me that one of the most exciting sporting events he had ever done was a college a basketball double-overtime game.

Where and how this fits in I don’t know but ESPN also announced that the Manningcast returns for a second season in 2022-23.

Joe Buck can become the face of ESPN play-by-play for the next decade or more if things work out in Bristol.

In the upcoming 2022-23 NFL Season, ESPN’s portfolio of games will increase from 20 to 22, with the addition of an exclusive Monday Night Football game on ABC and an exclusive Sunday international game on ESPN+. Adding in the Week 18 doubleheader which began this past season, ESPN will have three weeks with multiple games this season. That number jumps to five beginning in the 2023-24 season and continues for 10 seasons. ESPN will continue to televise the Pro Bowl, resulting in a 23rd game in the 2022-23 season. More details on who will be calling the additional games will be provided at a future date.