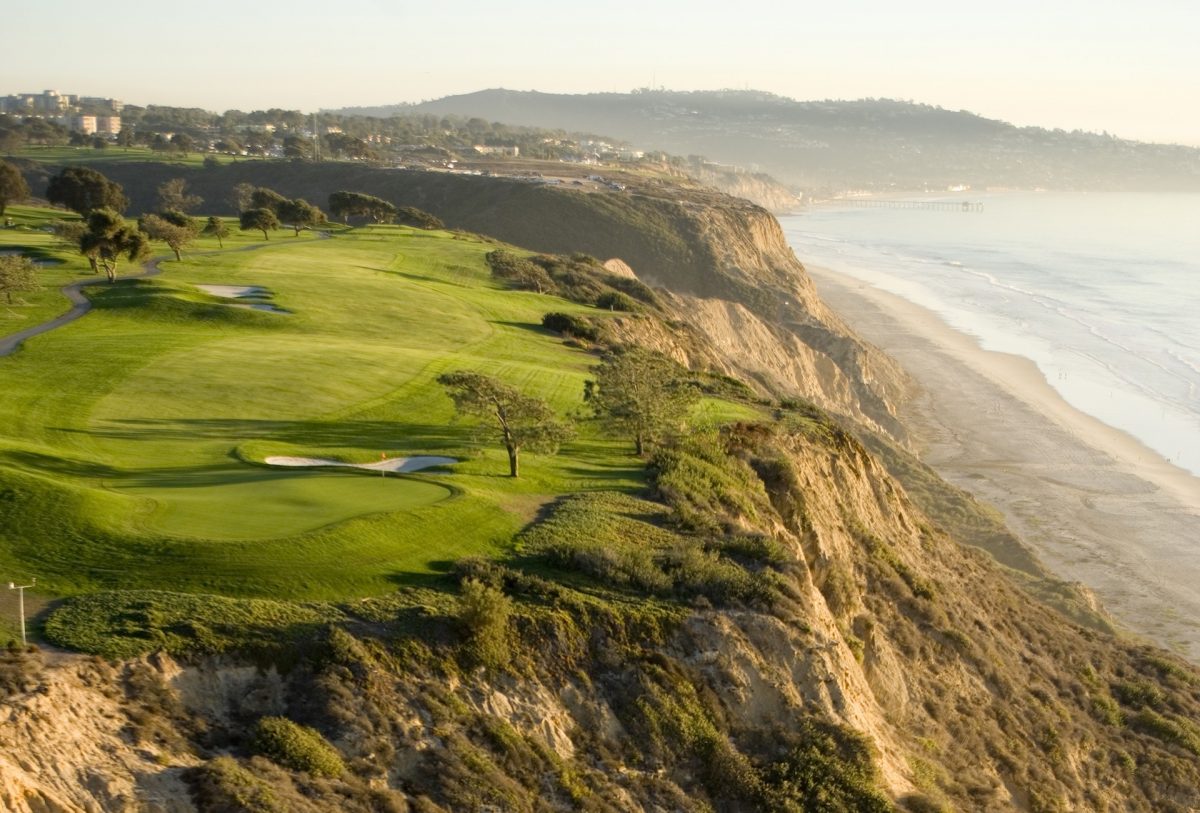 Broadcasting major championship golf. There’s really nothing else like it in network television sports.  Four days of long, wire-to-wire coverage, as much as twelve hours plus of air time. As we all know, one of the very first sports to cancel during the early days of the pandemic was golf. Remember, The Players Championship being cancelled after the first round in March 2020, then later that night, The Masters announced that its usual right of passage would be postponed. It all seems so long ago but yet is still very fresh in all of our minds.

What came about in late 2020 and into 2021 was the most unusual, complicated and condensed golf season ever on record and essentially you had two networks that suddenly were thrust into delivering six major championships plus an Olympics in ten months time. Not to mention that NBC Sports has the Super Bowl in Los Angeles next February. The four Major championships are essentially CBS and NBC products along with ESPN which chronicles early round coverage of The Masters and The PGA Championship. The latter two are produced in association with CBS Sports and both incorporate ESPN on-air talent like Scott Van Pelt, Curtis Strange and Andy North.

Some history is in order.  Up until June of 2020, the lineup for major championship coverage was:

The US Open- Fox

What happened?  Fox was really in a pickle. When the USGA announced that the US Open was going to move to September, Fox knew that the NFL football would get priority and that it was time to turn off the golf lights. Things happen for a reason.

First off, Fox wasn’t very effective at golf with a revolving cast and a suspect presentation of a sport that clearly wasn’t their forte. For Fox, it was a clear lack of identity and rhythm to produce such a prestigious event as the US Open and for a network with star personality Joe Buck in the lead host seat it was the right move to consider.

Covid opened a door for Fox to opt out of its twelve year contract with the United States Golf Association as it had completed its sixth year of its USGA run. NBC happily bought out the remaining rights and jumped back into saddle that it held prior to Fox acquiring the rights in 2015. NBC Sports head Pete Bevacqua spent six years heading up the PGA of America.

But putting together the production of the US Open on such short notice was not the easiest task. Yet NBC had the gifted and talented Emmy Award winning producer Tommy Roy in its stable.

If there was going to be a year that you wanted, ok, needed, Tommy Roy, 2020 was it. This is a guy who had already produced twenty US Open’s for NBC! He knows how to do big events, producing Olympic coverage for the Peacock along with Super Bowls and just about everything in between.  He knows how to organize quickly and get the most out of his people. In short, Roy was the man for the job when it came to NBC jumping back into the US Open game on short notice when they televised four days of US Open Golf coverage from historic Winged Foot last September.

I had a chance to spend some time with Tommy recently and we looked back on that time and we jumped ahead to this week’s US Open at Torrey Pines and discuss.

Getting prepared last year at Winged Foot and now this week at Torrey Pines.  It’s really night and day isn’t it?

Oh my gosh, you can’t imagine  Last year felt like a rush job as all the pieces fell into place around June which we were grateful for, but it was tough. With it being at the peak of the pandemic, we couldn’t even get to Winged Foot to conduct a site survey and we really missed having fans which helps build the drama. This year it has felt a lot more normal in preparing for Torrey and we’ll have some cool stuff for the viewers.

Give us an example please.

Just in front of the 18th green at Torrey is a large pond. Guys got to carry that pond or the ball is going to roll down that hill and they’ll either be in the pond or face a difficult shot. We’re going to have a “Frog Cam” set up. Kind of similar to what you see in bunkers these days but it’ll be in the water. We’ll be using drones in our coverage for sure, especially at a place with such amazing views like Torrey Pines but they’re pretty limited in the air for only five or six minutes at a time. So in our coverage at Torrey, airplanes are critical to our coverage, especially as the course sits near cliffs and we can’t physically get some of our cameramen in position for certain shots.

One of the innovations we’ve seen in the last year has been the incorporation of the Valencia camera, which captures very motion-picture like moments. We’ve seen this used in football and by CBS on its coverage of golf. Do you plan to use that camera?

No. I’m not really a fan of the Valencia camera in golf. It just blurs things in the background too much for me.

What is it that fans tell you they want more of when watching golf?

That’s pretty easy. They want more of the Tracer. The ease of following shots is magnified using tracer so we’ve tried to incorporate that quite a bit. It seems as though the tracer has been around forever but it’s still a fairly new technology. One thing though is we have to be careful with graphics-overload and that’s something we emphasize.

Last time the US Open was held at Torrey Pines, Tiger Woods won basically on one leg. Obviously with his latest setback he won’t be participating this year. Have you reached out to him to see if he would participate in any way, shape or form on the broadcast? 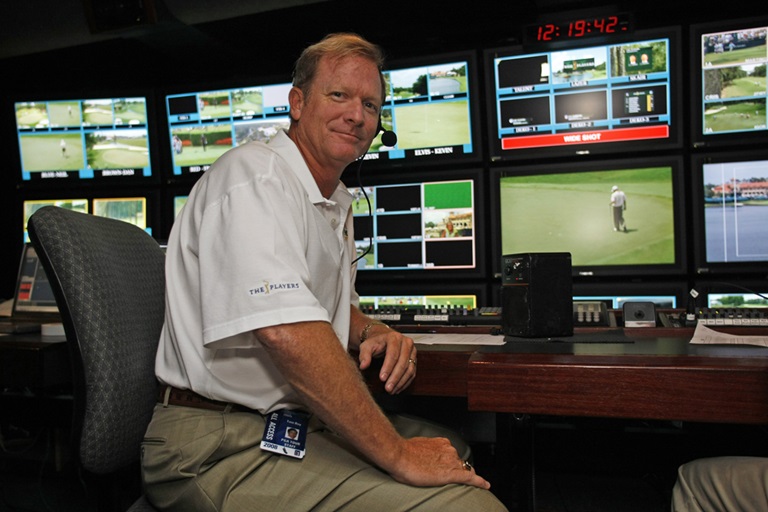 You’ve been quoted that there’s an NBC Sports way of doing things. What does that mean?

There’s a first guess and a second guess. The first guess is to say it before it happens. Be bold. We don’t want to second guess after the shot has occurred.  Something we also never do at NBC Sports is to speculate on injuries. (Tommy Roy, NBC)

The advent of technology gives broadcasters and the viewing public the clearest pictures we ever could imagine. These days, controversy seems to follow golf whether its Jon Rahm at last year’s Memorial, Patrick Reed earlier this year at The Farmers or about once or twice per calendar year. What is your message to your crew if controversy pops up on a rules violation?

Don’t forget about Reed scooping sand in The Bahamas, (Laughs). You have to deal with the situation on the spot. The viewer deserves honesty and candidness.

Speaking of candidness, you’ve had major champion Paul Azinger in the lead analyst chair since 2019. He had some huge shoes to fill in the retired Johnny Miller. Thoughts on Paul?

He’s very opinionated but backs it up. He’s always at the range with guys, looking for angles. Paul is very perceptive, particularly at the mental aspect of golf and he has a way of verbalizing it that connects with viewers.  He and Hicksy, (Dan Hicks lead host) do a phenomenal job together and they have excellent chemistry.

That being said your golf talent has been together a long time. That has to make a difference I assume?

Absolutely. Basically we want it to sound as though they’re having a conversation on a couch. If Roger Maltbie sees something we want him to speak up.

You’ve also produced Olympic Swimming for some time. This year the US Olympic swim trials will conflict with The US Open and Dan Hicks has been on those calls for years. How will NBC handle it?

Dan’s going to be in San Diego for the duration of the The US Open. Mike Tirico will anchor coverage from the trials and he’ll be on the call with Rowdy Gaines. I’ll be there early to help get it going but will be in San Diego later in week.