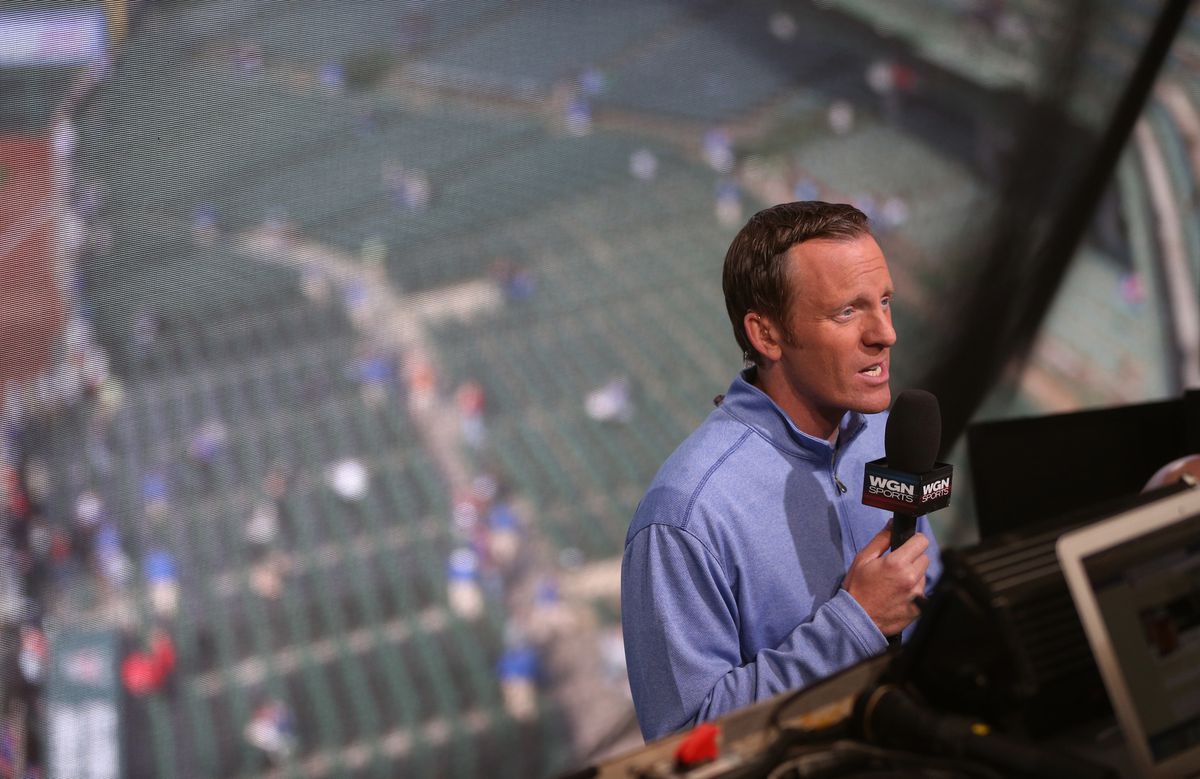 Len Kasper is moving from Cubs TV to White Sox radio. He spent 16 seasons as the lead voice on the National Leaguer’s telecasts. Prior to it, he was the television announcer for the Marlins.

Boog Sciambi (left), himself a former Marlins announcers takes over the reins of play-by-play on Cubs television. The men overlapped covering the Marlins in South Florida. Boog will continue to work for ESPN where he calls both baseball and college basketball.

ESPN’s popular Boog Sciambi: “To sound like a baseball voice of 50 years ago doesn’t work today”

For Kasper, the move from TV to radio and from the Cubs to the White Sox is rather curious.

There haven’t been many broadcasters who’ve moved from one part of town to another to join a rival team. Those who have were big names. In New York in 1954, Red Barber left the Dodgers for the Yankees. It was a striking move. Not only did Red go from Brooklyn to the Bronx to the hated Yankees, he also went from sponsor Schaefer to Ballantine, the longtime beer of the Yankees. How can he do that, Brooklyn fans asked.

Marty Glickman, whose voice was so linked with the Football Giants, moved to the Jets in 1973. New York football fans couldn’t believe it at the time. Going from one club to another in the same market isn’t the same as jumping networks, say ESPN to Fox. Marv Albert was dropped by the Knicks and caught on with the Nets.

Years ago, leaving a team for a rival meant more than it does today. There was one top voice for each team who often covered both TV and radio. Now, most teams have different sets of announcers for each medium. In some towns, you need a scorecard to identify all team announcers in a market.

In Chicago, Harry Caray (left) famously left the White Sox for the Cubs and it stirred the fan bases of both clubs. After he spent 11 years with the South Siders, Caray, in 1982, began a 16 year stint with the Cubbies. While Harry made a mark in Comiskey Park, at times broadcasting games shirtless in the bleachers, it was at Wrigley where he developed an indelible bond with Chicago baseball fans.

Kasper will continue to get some TV reps too, joining Jason Benetti and Steve Stone on roughly 25 White Sox telecasts.

We had a chance to do a Q&A with Len recently.

There have been local MLB voices like the Red Sox’ Joe Castiglione and the Cubs’ Pat Hughes who were on TV and moved to radio. Now you’re doing it. What is it about the White Sox and radio that inspired you to make the switch?

The seeds of my baseball and sports fandom grew from listening to a crackling radio in the late 1970s and early 1980s. Ernie Harwell and Paul Carey, the longtime voices of the Tigers, inspired me to want to be a big league broadcaster. I would be remiss if I didn’t mention Bruce Martyn, the long-time Detroit Red Wings radio voice, and Pat Foley, the Blackhawks voice as well. They had a huge impact on me. To be able to do White Sox games on radio is something I will tackle with all the energy of a rookie broadcaster. It’s truly thrilling.

You had a long run with the Cubs, 16 seasons. What will it be like to go to the South Side from Wrigley? Hasn’t Chicago traditionally been a Cubs town?

That will be interesting for sure. I feel like I know the Chicago market pretty well, but the fan bases are definitely unique. I will say this, I have heard from many friends and acquaintances who claim they have always (at least nominally) rooted for both teams. That makes sense considering the teams are in opposite leagues.

Harry Caray made the move the other way, from the Sox to the Cubs. Red Barber went from the Brooklyn Dodgers to the New York Yankees. How do you expect to be treated by White Sox fans? Will they say, “Len will always be a Cubs man?”

That’s a great question. I honestly don’t know. I think the everyday nature of baseball allows a broadcaster to fairly quickly become part of that “family” but we will see how that goes. I’m hopeful it’s a fast transition.

What will the transition be like going from captioning the picture on TV to painting one on radio?

I’ve long called radio webcast games during spring training and called an inning of play-by-play on Cubs radio during their post-season runs, including in 2016.

What did you learn listening to Ernie Harwell?

Not sure where to even start with Ernie…Yes, he was the one who got me hooked. I’d say I learned everything from Ernie, but let me throw out a couple specifics. 1) The score never mattered in terms of his approach and energy. His relentless consistency was hugely influential on me. The game is paramount and whether it’s 1-1 in the 8th or 16-2 in the 5th, you owe it to your audience to be great. 2) His ease of description and efficiency with the language was unparalleled. He never used unfamiliar vocabulary or tried to sound “cute,” he just used sentences that clearly painted a picture. “Fouled upstairs” is a two-word call that makes it obvious what happened. As does, “The umpire holds up 2 fingers on each hand.”

How tough was it to do games remotely this past season?

It was a huge challenge, but I thought it went way better than expected. If being on-site gives us a 100 grade in terms of accuracy and comfort, then a remote broadcast felt like an 85. You miss things not being in the venue, but generally it’s not blatantly noticeable to fans at home.

Will the  practice of broadcasting remotely continue after the pandemic? If so, how do you feel about it?

My guess is in some sports, yes. With baseball being a non-linear sport in every way, my hope would be at the MLB level, we will always be in the ballpark when health guidelines allow it. I get the idea of saving money where necessary, but I never want to feel like we don’t have the inside view of the game that makes the broadcasts as good as they can be.

It occurs to me that Lon Simmons went from the Giants to the A’s, but not directly–when the Giants moved from KSFO to KNBR, Lindsey Nelson came in and found the fans much preferred Lon, who started with the A’s in 1981. So there was a lag, and in fact A’s fans were thrilled to have him and Bill King, the two biggest Bay Area broadcasters, do their games. And King had done the Giants soon after they moved west as the #3 announcer, so he kind of switched, too!