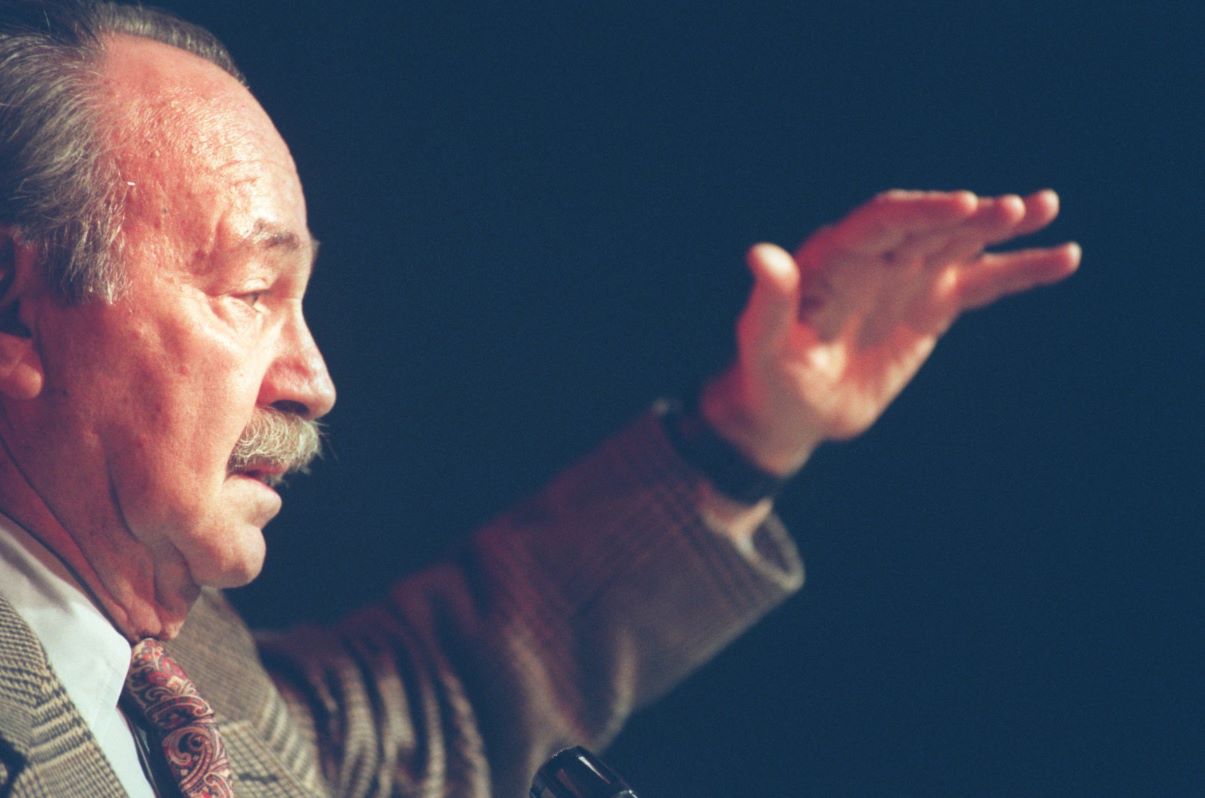 Marty Glickman was a portrait of all-around greatness.

They didn’t come any better. He was a sparkling athlete, an Olympian, a sportscaster extraordinaire, a pioneer basketball announcer and a broadcast coach to the who’s who of voices. Even obscure kids who sought a tip or two, reached out to Marty and he gladly assisted them. He’d do so happily, not out of necessity. 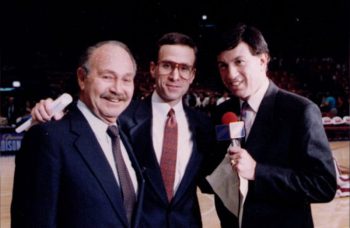 Glickman grew up in New York City where he was a legendary high school athlete in football, basketball and track. His wave of success carried him through Syracuse where he was a football standout. At age 18, Marty qualified for the 1936 Berlin Olympics’ track team. It was in Germany that his medal hopes were dashed by his own coaches and by America’s chief Olympics administrator Avery Brundage. The latter didn’t want to agitate Adolf Hitler and Germany’s openly anti-Semitic policies. (To the left, yours truly, flanked by Glickman to my right and Marv Albert, Nov 7th 1991 at MSG, the 45th anniversary of the first ever Knicks broadcast, covered by Marty.)

The decision to hold back Glickman and Sam Stoller, both Jews, from partaking in the 400-meter relay was apparently initiated by Brundage. The U.S. Olympic head didn’t want to confront Hitler on his home turf despite his despicable racist and anti-Semitic policies. As it was, American Jesse Owens, a Black man, was in the process of earning four gold medals in Berlin. So Brundage strongly suggested to the U.S. track coach Dean Cromwell to hold back assigning the two Jewish track stars. Cromwell did so at the last minute and it stuck to Marty’s ribs until his death in 2001.

Yet, Glickman came back to the States with his head high and his determination undeterred. After graduating Syracuse, a local haberdasher approached him to do a radio show that he was sponsoring. While Glickman was blessed with a deep and full voice, broadcasting was something that Marty never considered for a career. In fact, Marty said that as a kid he stammered. Nonetheless, Marty got a taste for radio and then pursued a broadcast job in New York.

Once back in New York City, he was hired by radio station WHN. College basketball doubleheaders at Madison Square Garden were gaining popularity but little of it had been covered on radio because the sport was considered too fast- paced and impossible to follow on radio. So Glickman developed the language to paint the game for listeners. He called hoops rhythmically and electrically. Later, when the Knicks were born in 1946, he was the club’s first voice. Glickman is considered America’s pioneer basketball announcer, having developed the game’s radio phraseology by designating on-court landmarks (“top of the key”) and calibrating his rhythmic inflections just-so, and in lockstep with the movement of the ball. In the 80s Glickman told a television audience that he picked up some of his basketball nomenclature from what Foster Hewitt did with hockey in Canada.

The gifted and well known author, Jack Kerouac wrote of ,Glickman in his best-seller, On the Road, “Man, have you dug that mad Marty Glickman announcing basketball games – up-to-midcourt-bounce-fake-set-shot, swish, two points. Absolutely, the greatest announcer I ever heard.” 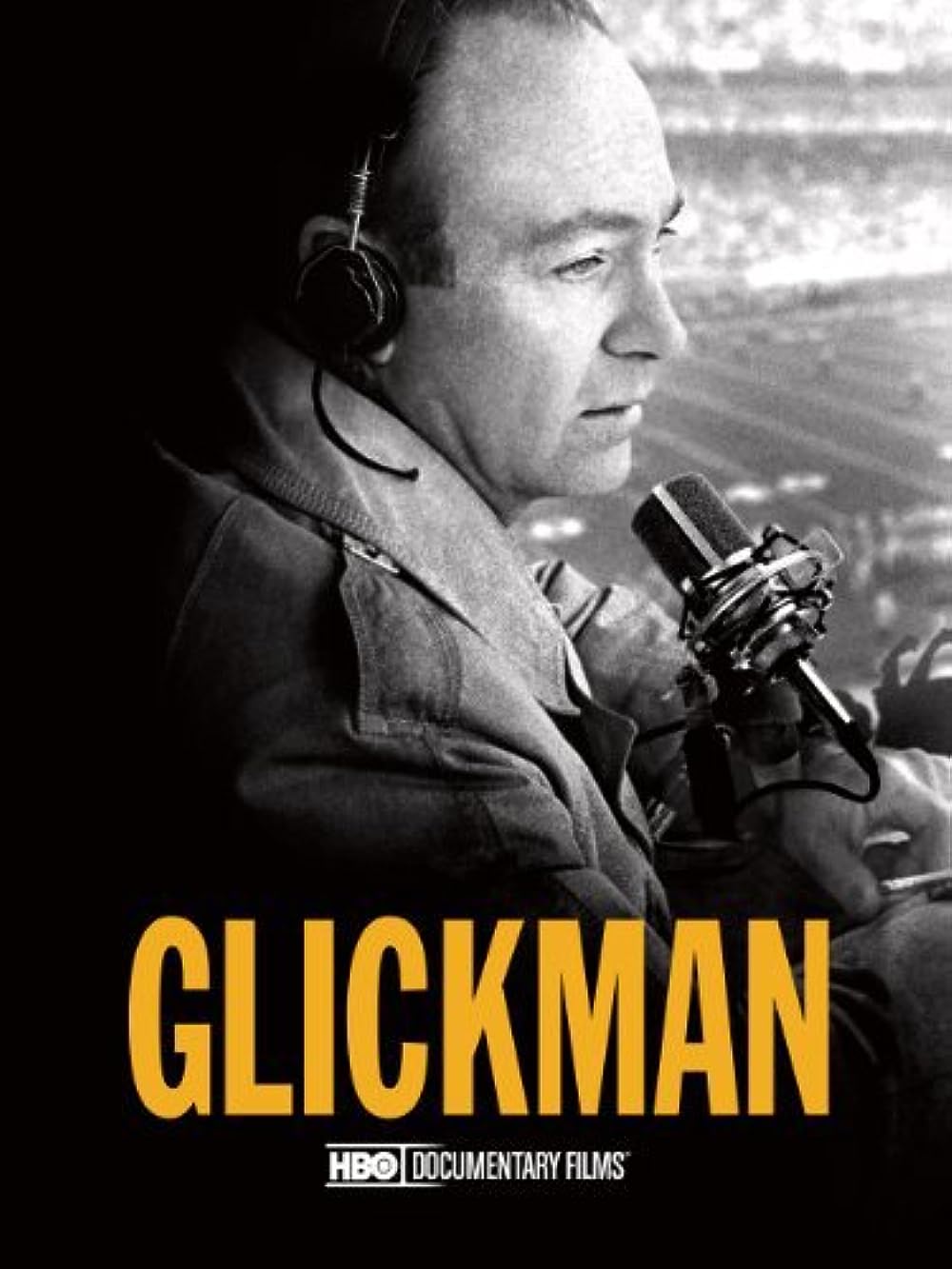 Marty would go on to do and to be, so much more. His popularity in New York ballooned during the years he did Giants football on radio. His crisp call couldn’t have been any more descriptive or intense. The way he’d clip his words and pause were impeccable, He told me that he broadcast football as if he were still down on the field, playing the game. He actually looked exhausted after a broadcast. I still have visions of the day I watched him call a Giants-Steelers game in 1971. The man looked drained  slumped on his chair.

Through all his seasons covering the Giants, home games were blacked out on TV and Glickman was appointment listening. Fans knew that the Giants at some point would be driving toward the “open end of Yankee Stadium.” The big ballpark in the Bronx was the club’s home from 1956-73. In the 1950s and 60s, Marty inspired a generation of budding broadcasters, most notably Marv Albert, Sal Marchiano, Dick Stockton, Len Berman and Spencer Ross.

Years later after so many diverse assignments, he became a broadcast coach and assisted many network voices like Albert, Sean McDonough and Bob Costas to name three. Dick Enberg told me that his conversations with Glickman were helpful to him too.

In my single years, Marty and I had apartments on the same block in New York’s Upper East Side. The one bed room apartment in which he lived with his late wife Marge struck me as open. Open in the sense that guests popped in and out freely. They came and went to either pay homage or to seek advice. Marty’s apartment was likely the warmest one  in the sterile skyscraper that towered over the many brownstones on Manhattan’s side-streets.

On Monday, we’ll go through Marty’s assessment of top network broadcasters from Michaels to Enberg and Costas to Albert. You’ll be surprised to hear his appraisals.

I’m eager to read his appraisals.

I moved to NYC in 1988 for school and got to hear him do the Jets on radio. He was still tremendous in his 70s. I also have to wonder why he didn’t get more attention from the networks, being based in New York, and let’s just say I have an uncomfortable feeling that Avery Brundage and Dean Cromwell could explain it.

When I was promoting for nine years or so The Schaefer Circle of Sports, which televised basketball, hockey, thoroughbred and harness racing, I developed a PR program on how to watch a sport like a pro on television. I utilized Marty Glickman for basketball, Win Elliot for hockey and Fred Capossela for thoroughbred racing interviews with television sports writers, which was in the vogue at the time. They gave hints on what to watch for.   Marty was of particular interest also to none TV sports columnists because of his being outspoken about his treatment at the 1936 Olympic in Berlin., which you have written about. But I… Read more »