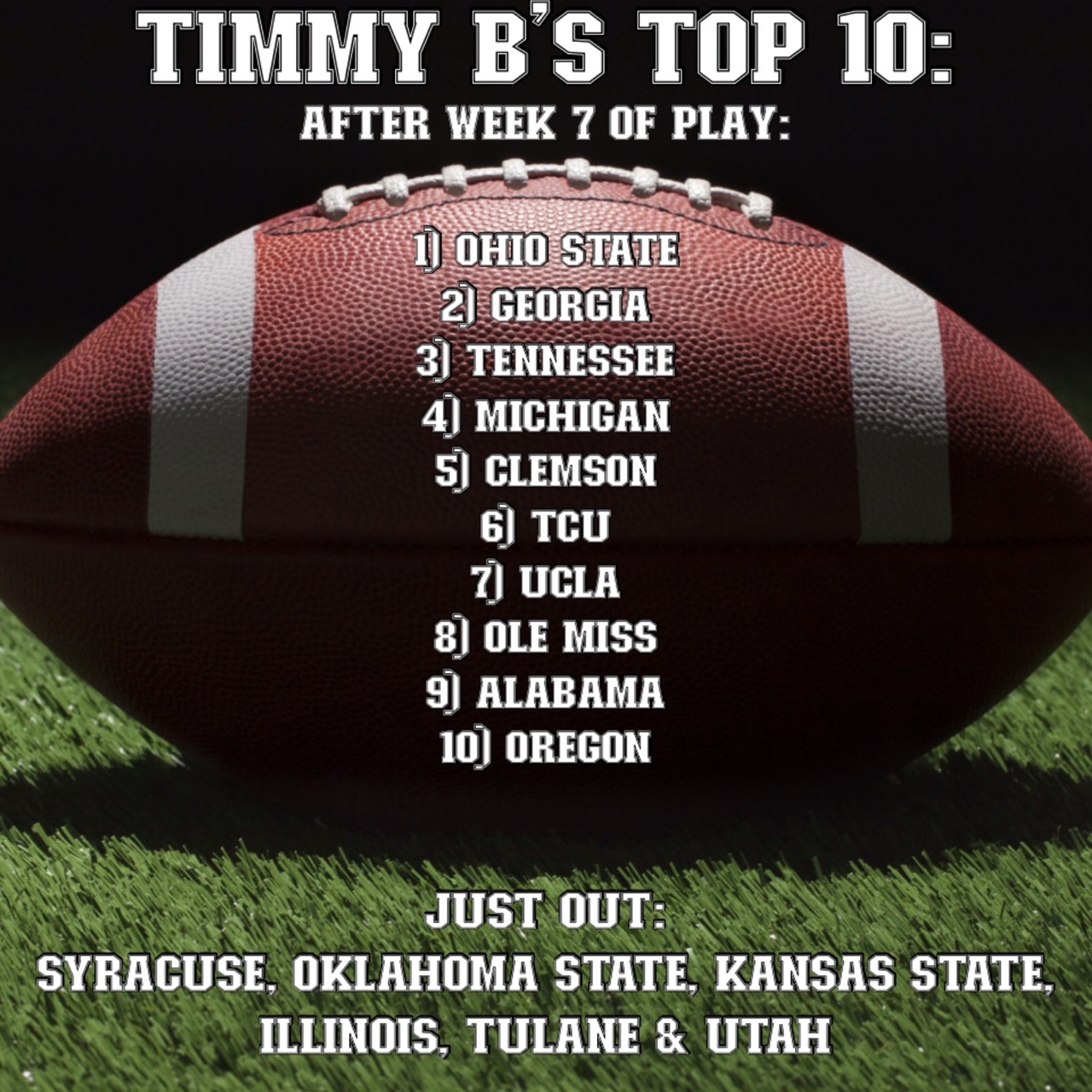 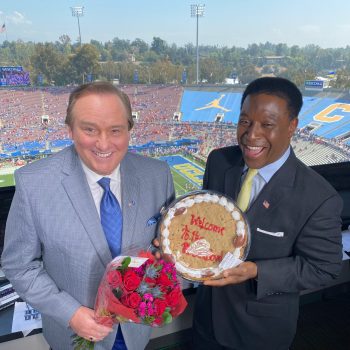 1 – Ohio State‘s offense finally gets a test against a really solid D in Iowa. The problem for Iowa? Its offense must also play some D.

2 – Does Georgia really need a week off before the Florida rivalry next week? I guess🤷‍♂️

3 – Tennessee is now in rarified air, after beating Bama. Now, can the Vols roll with their full cup of success!

4 – Michigan has proved that with a quality team, the QB can be balanced too.

5 – Clemson has won a variety of different ways this season which impressed me. Syracuse will challenge them this weekend. (Tim Brando and Spencer Tillman above)

6 – TCU The Horned Frogs are for real! Sonny Dykes is an early leader for National Coach of the Year!

7 – UCLA Chip Kelly’s not far behind Dykes for C.O.Y., and his Bruins look to prove their worth at Chip’s old house, Autzen Stadium.

8 – Ole Miss The Rebels will have to prove they are. A stop the run against LSU, but Kiffin’s team runs it well himself enough to win at Tiger Stadium.

9 – Alabama, ranked where they should be! Way too much! Pure Playoff Privilege afforded them. Saban’s gotta’ address some issues in this new era of CFB.

10 – Oregon I can’t think of a veteran transfer, performing any better than Bo Nix! This week the rubber meets the road against DTR and the Bruins. Something’s gotta’ give.

At CFB’s midway point it’s become clear as my partner Spencer Tillman likes to say, “the CFB landscape has never been more flat.” He’s right, and expecting more upsets should be the rule rather than the exception.

The teams just-outside my TOP 10, like Oklahoma St., Syracuse, Tulane, and Illinois are all performing at really high levels, and while Kansas (America’s darling) has lost twice they’re covering spreads and in every game!

Last week, we got the first tremor (when Bama went down) of what could be many more earthquakes in the season.

This week Spencer and I have the top 2 BIG12 teams going at it in Ft. Worth in primetime, TCU and Kansas State are led by a pair of ballers at QB. Nebraska transfer Adrian Martinez has been stellar for the Wildcats and the Horned Frogs led by Max Duggan, a veteran QB whose toughness wills his team. See ya on FS1 in primetime.

Tim Brando and Spencer Tillman are among the most tenured college football broadcast partners on network TV sports.